Kyber Network is an on-chain liquidity protocol that can be used for a wide variety of inter-token use cases. The protocol allows decentralized token swaps to be integrated into any application, enabling value exchange to be performed between all parties in the ecosystem. Using this protocol, developers can build innovative payment flows and applications, including instant token swap services, ERC-20 payments and financial DApps.

The project's mission is to make any tokens "usable anywhere and become the transaction layer for the decentralized economy". 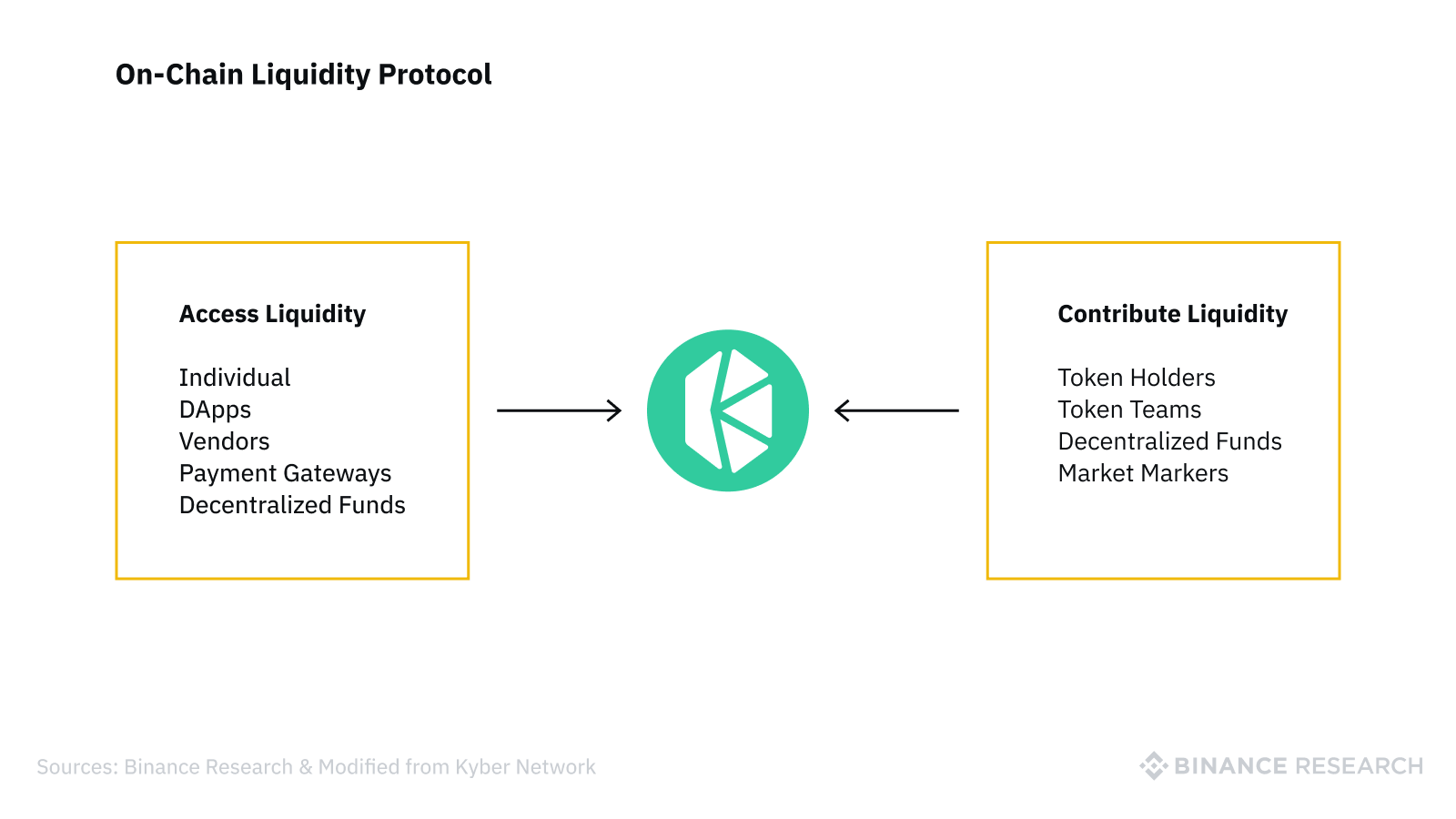 Compared to its competitors, Kyber Network's differentiation points include:

KNC (Kyber Network Crystal) is an ERC-20 token that is used by reserve managers to pay transactions fees required to execute trades (operate a reserve) and awarded to third parties for generating trade volume. Kyber charges a small fee in KNC each time an exchange happens on the network, then burns the KNC tokens collected as transaction fees.

Over time, as more trades are executed, additional fees will be generated and more KNC tokens will be burned, reducing overall token supply. 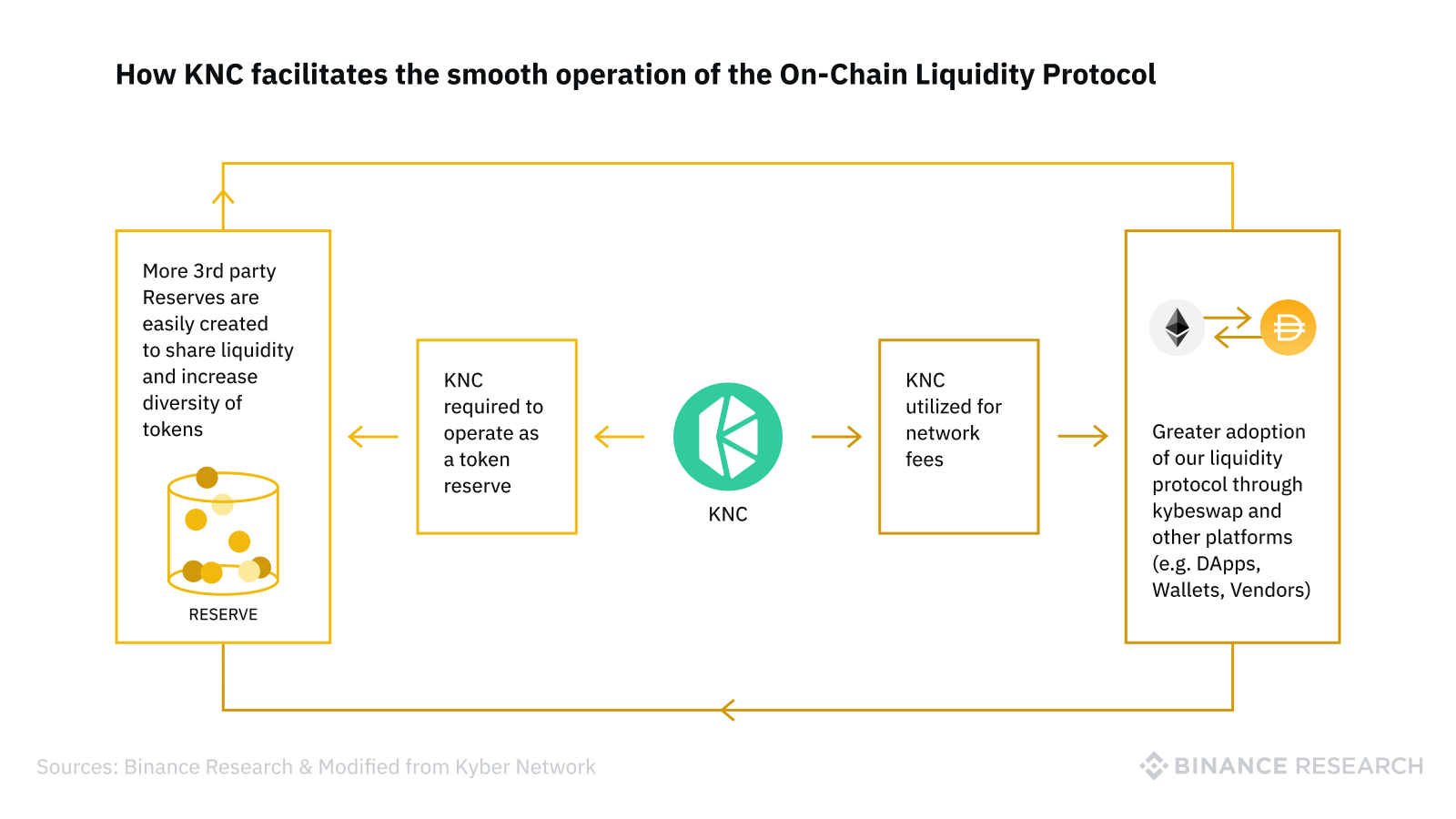 Some of its use-cases include:

Various platforms and use-cases exist that can leverage Kyber's liquidity protocol, such as wallets, websites, vendors, trading programs and DApps. Projects powered by Kyber include the following: 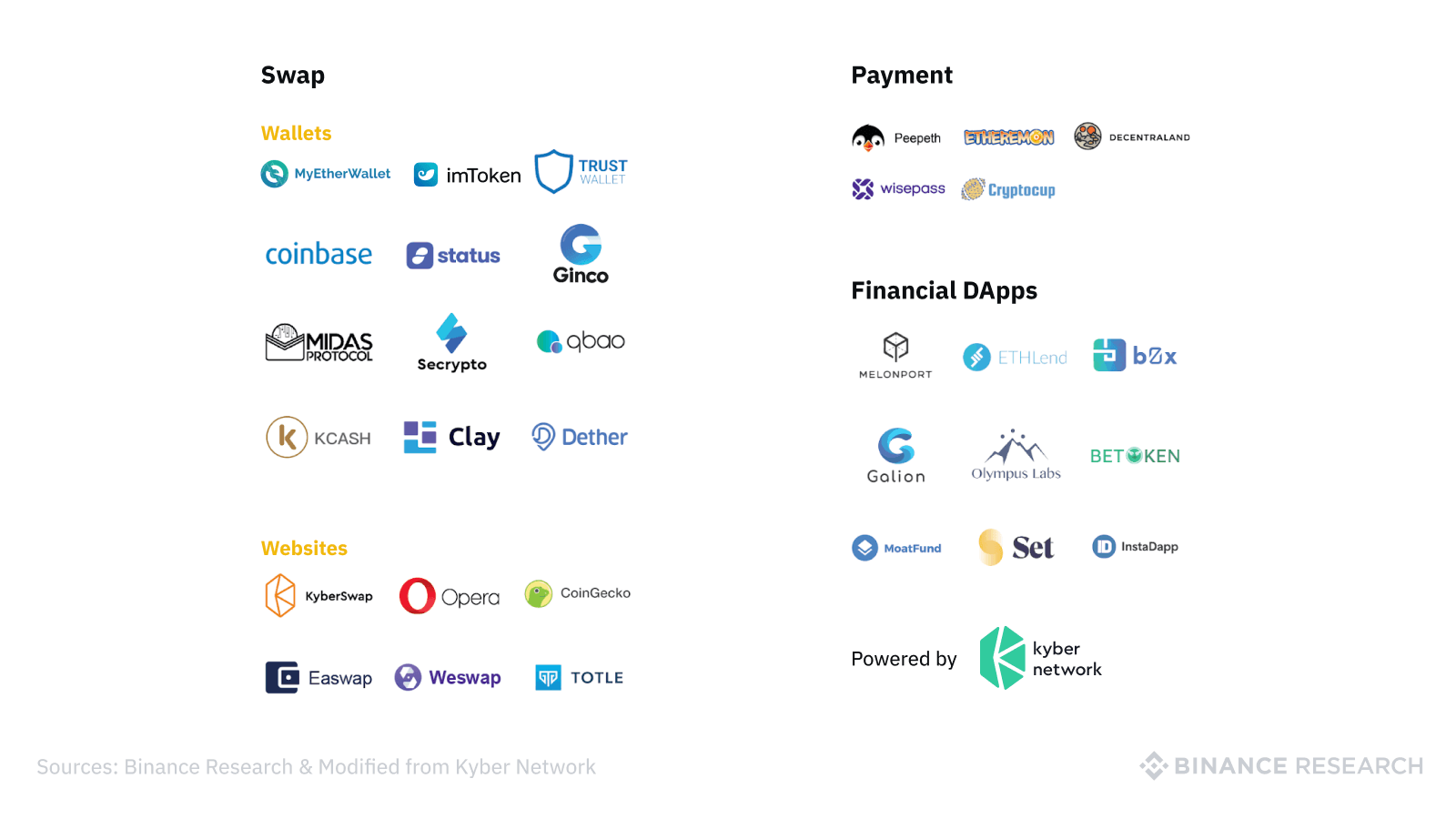 One such platform is Kyber's end-user retail product, KyberSwap on Ethereum. KyberSwap is a simple and secure token swap platform. Users can instantly convert ETH to ERC-20 tokens, or one ERC-20 token to another through KyberSwap, with no deposits or order books. Similar implementations exist on EOS (YOLOswap) and TomoChain (TomoSwap). In addition, the team has also been working on cross-chain protocol like Waterloo to allow EOS/Ethereum token swaps.

The tokens and ETH raised are stored in multi-signature wallets, and the private keys are held by co-founders and advisors.

Kyber has 48 employees, 32 of which are developers. Key staff members are shown below.

Furthermore, Kyber has 6 advisors that can be found in the Appendix.

Kyber Network has a global reach with social communities in many languages and a growth strategy that is driven by 3 main pillars:

Kyber is currently focused on growing a community of developers who can build useful decentralized applications (DApps), platforms, and products that leverage its liquidity protocol. To achieve this, Kyber has created a developer portal with the necessary documentation and tools for seamless integration. In addition, Kyber has targeted key developer touch points, sharing information about the protocol at various hackathons and tech events such as ETHGlobal, DevCon, and BlockchainEXE. Kyber is also participating in the Future of Blockchain hackathon, educating student developers from Cambridge, Oxford, Imperial, LSE, UCL, and KCL.

For the non-technical community, Kyber works with integrated projects and token teams to run joint community engagement campaigns that both educate and reward members. As an example, Kyber has collaborated with Etheremon (blockchain game) and CoinGecko (data aggregator) for community giveaways, via outreach channels such as Telegram, Reddit, Twitter and others. Additionally, promotional materials are translated into different languages (Chinese, Korea, Japanese, and Vietnamese) to address global user bases This strategy is designed to continuously share content around integrations that reinforce the direction of the protocol.