EOS’ most differentiating factors are its early focus on establishing guidelines and processes for the blockchain governance and relatedly, its use of a delegated Proof of Stake consensus mechanism. Additionally, EOS has a unique resource model with three distinct resources: CPU, RAM, and NET.

One of EOS’ co-founders, Dan Larimer, invented this consensus mechanism. The EOS blockchain makes use of a set of 21 delegates, also referred to as supernodes, to vote on new blocks in a round-robin model. EOS token owners elect these delegates out of a broader set of candidate block producers. Since block producers get rewarded per block validation, they have an incentive to get elected as a block producer, which puts them in direct competition for votes with each other. The block rewards are paid on a per-block basis and are financed by annual token inflation of 1%. The below graphic from IG displays the schematic consensus process. 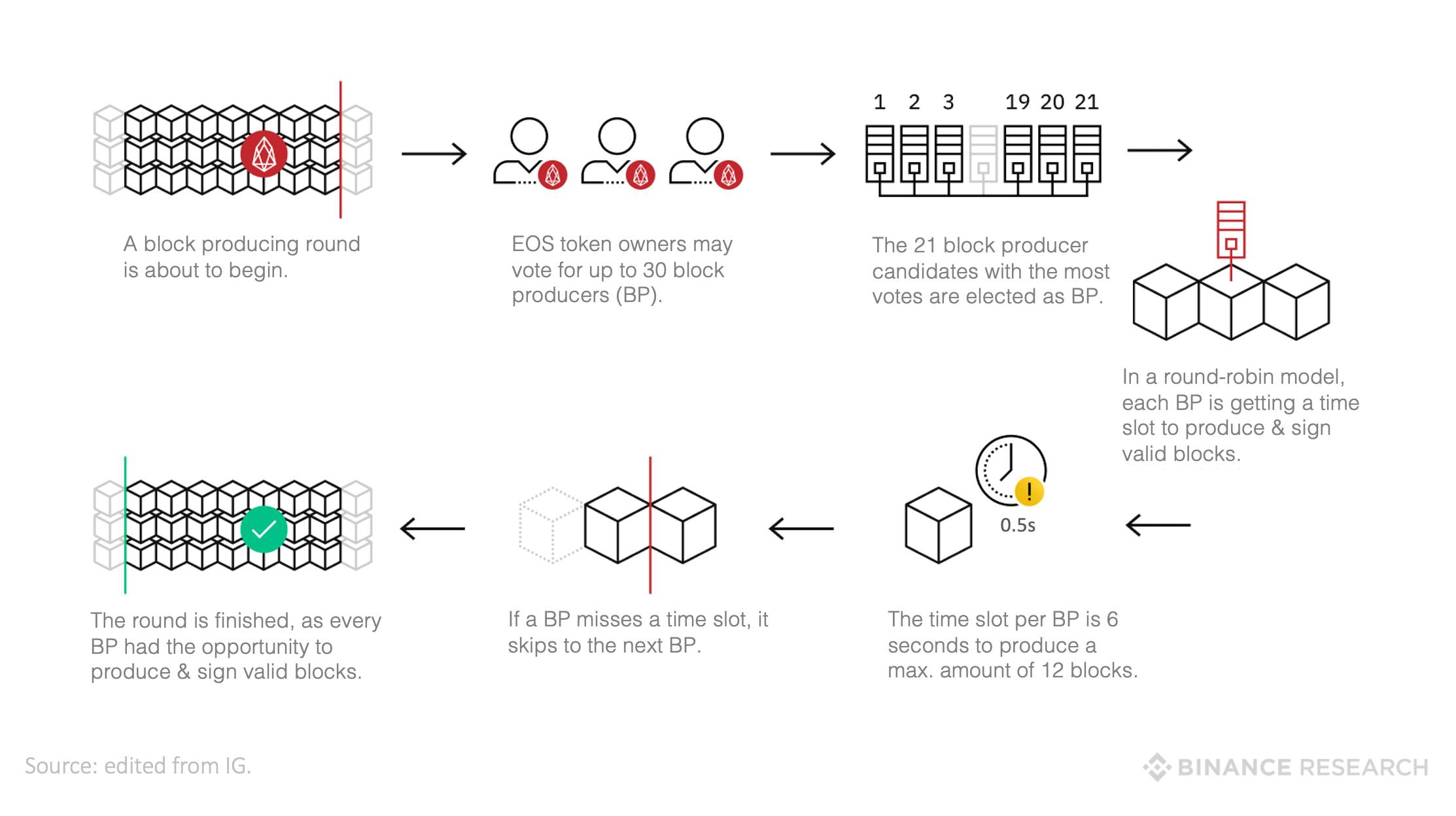 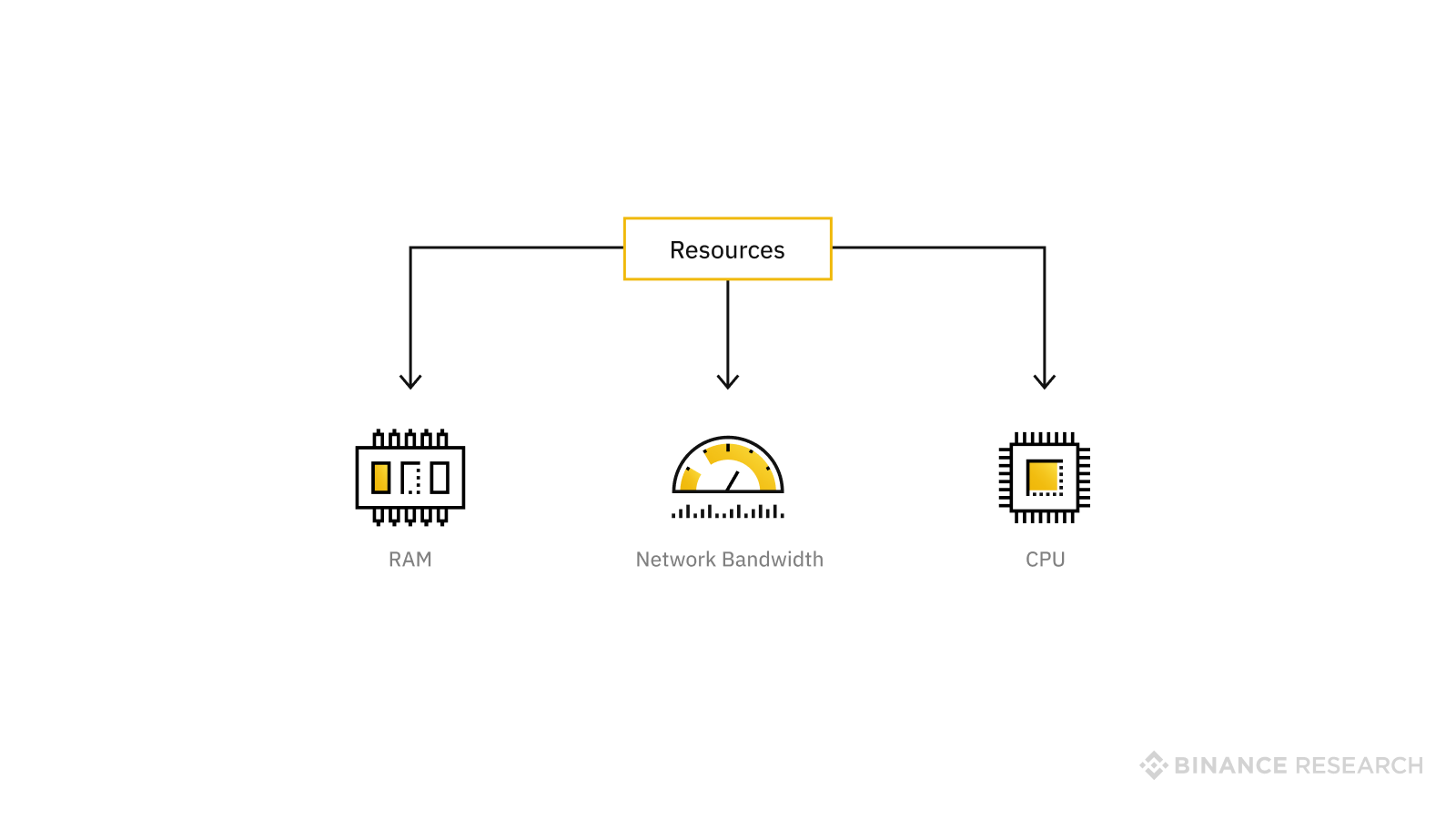 Unlike RAM, whose supply is increasing continuously on a daily basis, CPU is used to execute transactions. Complex transactions require more CPU and vice versa. NET is the possible throughput, defining the share of the blocks’ network representation that can be occupied. CPU and NET are allocated to users via the staking of tokens.

Although RAM was always priced and sold via a smart contract using the ratio of available RAM to EOS tokens in the contract, CPU and NET have only become tradeable with EOS REX, the EOS Resource Exchange. Previously to this, the only way to optimize resource usage was a surplus allocation that allowed dApps to exceed their allocated resources and draw from unused resources.

This aims to avoid an inefficient resource allocation from inactive - “hodling” - token owners that are not utilizing their allocated resources, additional market-driven allocation mechanisms have been introduced.

There are five main groups of actors within the governance ecosystem of EOS. These actors are (1) token holders, (2) proxies, (3) dApp developers, (4) block one, and (5) (candidate) delegates. 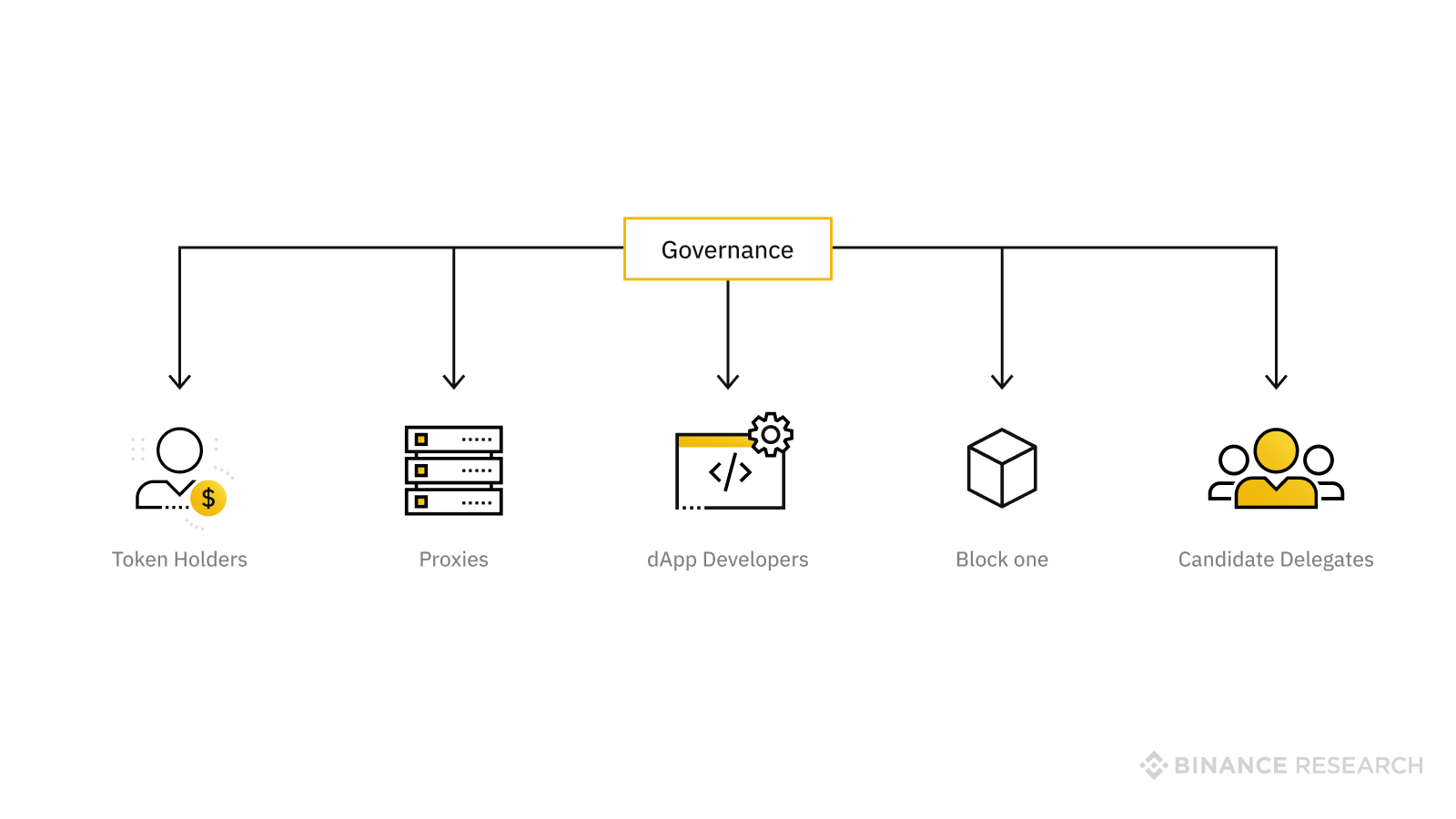 While most of the actors have a direct influence, dApp developers have an indirect influence from building the dApp ecosystem on top of the EOS blockchains. Similarly, the company launching EOS, block.one, has indirect, as well as direct influence.

Direct influence relates to a clearly defined participation in the governance of EOS. Token holders, for example, can vote for delegates or proxies by using their token. These proxies are usually trusted community activists that may vote for token holders on their behalf. Lastly, delegate (candidates) are parties with the wish to become a block producer of EOS.

EOS also has a dedicated constitution and various other governance processes.

The following list includes researchers and the core team of EOS working at Block.One. For more information on the EOS team, please visit its official website here.

Brendan Blumer
CEO / Co-founder
Brendan is an entrepreneur, was an early investor in blockchain and transitioned to full-time involvement in the space in 2016 after he met business partner Dan Larimer with whom he co-founded Block.one.
Daniel Larimer
CTO / Co-founder
Dan is strongly involved in the blockchain space, invented the delegated Proof of Stake consensus system and used it for an array of successful blockchain companies (e.g., BitShares, Steemit, Block.one) that he co-founded.
Andrew Bliss
Chief Strategy Officer
Andrew focuses on company strategy, governance, risk and corporate expansion initiatives. Prior to Block.one, he held numerous responsibilities, particularly with global avionics and technology multinational Rockwell Collins.
Ted Cahall
Chief Operating Officer
Ted is responsible for operations, product and technology execution. Prior to joining Block.one, Ted held senior positions in multiple companies such as Microsoft, Digital River, AOL and Bank of America.
Steve Allis
Chief Financial Officer
Steve leads all aspects of financial control, planning and balance sheet management at Block.one. Prior to joining the company, he was Executive General Manager at Commonwealth Bank of Australia and worked at Credit Suisse in Investment Banking.
Abby Blumer
Chief Communication Officer
As one of the co-founders, Abby is in charge of Block.one’s global marketing and communications activities. Prior to Block.one, she worked in marketing and operations for a Hong Kong-based software developer.
James Mendes
Chief People Officer
James is responsible for managing the company’s human resources function. Prior to Block.one, James was, amongst others, Managing Director of Human Resources at Citibank and Managing Director, Asia, at Korn Ferry.
Alex Erasmus
Chief Legal Officer
Alex oversees all Block.one’s legal, regulatory and compliance activities. Previously, he was a partner at leading international law firm, Clifford Chance, where he headed its Financial Institutions Group.
Eddie Schwartz
Chief Information Security Officer
Eddie is responsible for Block.one’s cyber security. He is an industry veteran with more than three decades of experience. Eddie led global security industry working groups and held senior positions at companies such as WhiteOps, Verizon and RSA.