The Evolution of Stablecoins

How are fiat-backed stablecoins adapting their strategies to remain competitive?
Binance Research (Etienne)
May 15th 2019
Share this article

The large majority of collateralized stablecoins are USD-pegged. However, many stablecoin-related projects are now rolling out additional products and services that may expand the use cases and reach of these coins beyond USD barriers. In this report, we examine the current state of stablecoin popularity, and what might be next on the stablecoin horizon.

As discussed in our previous report about crypto-correlations, stablecoins are continually growing in popularity. Quote asset volumes driven by stablecoins on Binance (denoted as USD(S) in the figure above) have grown from just over one-third of all volume (35.78%) one year ago to over three-fifths (60.55% as of May 1st, 2019), eating into the market share of both BTC-denominated and ETH-denominated pairs. Interestingly, the share of volume in BNB pairs also doubled during the same time period.

1.2 Stablecoin pair additions on Binance over first 4 months of 2019

Part of the increase in volume from stablecoins can be attributed to the introduction of several stablecoin pairs with new quote assets and base assets.

Large cryptoassets such as NEO, Litecoin (LTC), Cardano (ADA) or Bitcoin Cash (BCHABC) received additional trading pairs against PAX, TUSD and USDC, complementing the previous addition of USDT pairs. On top of this, a dozen of large assets were listed against USDT which is expected to further reduce the percentage of the cryptoasset total trading activity from BTC pairs to stablecoin pairs.

1.3 Net inflows: more deposits than redemptions over the first four months of 2019

Once again, USD Tether (USDT) saw the largest net inflow, with a total increase slightly below $1bn USD. Though Tether’s market cap is much bigger than the cumulative market capitalization of all five other stablecoins discussed in the table above, these inflows still represent an increase of around 50% of Tether's total supply, particularly notable in a period of turmoil for the company.

Amongst the non-USDT stablecoins, USDC was the biggest gainer in circulating supply, seeing an inflow of nearly 60 million USD in January. While USDC saw the largest monthly net redemption amount in February, it rebounded with a slightly positive inflow in March. In April, both USDC and PAX saw minting of over 40 million tokens. Notably, GUSD was the only stablecoin not to have an inflow in any of the four months, displaying a continual net redemption trend. As a result, owing to its small market cap, Gemini Dollar lost nearly half of its market capitalization in the first four months of 2019.

We selected BTC, being the largest digital asset in the world by market capitalization, to act as the base currency for comparing the liquidity of each stablecoin on Binance: Tether (USDT), Paxos (PAX), TrueUSD (TUSD), USD Coin (USDC), and StableUSD(USDS).

Unsurprisingly, the BTC/USDT pair exhibits the lowest median and average spreads over April 2019. With USDT listed on so many other exchanges, one would expect a tight spread given the potential for cross-exchange arbitrage strategies. On top of this, the frequency of filled trades (measured by the distance in time between two consecutive trades) is extremely high for this pair, occurring at an average frequency of under 0.3 seconds.

What does this data reveal about the “untethered” trading landscape?

Over the past trading four months, there were three major phases & events in the price of Tether:

While Tether is “blockchain agnostic” and features an ERC-20 token, most of its supply runs on the OMNI layer, which is built on top of the Bitcoin blockchain. Recently, a partnership between Tether and Tron has made the news4, leading to potential expansion on yet another chain.

Regardless of the specific chain, the trend of Tether lessening its OMNI reliance marches on. As of April 30th, 400 million for Ethereum-based and 137 million for Tron-based tokens existed. In comparison, USD Tether running on the OMNI blockchain represents roughly 2.82 billion, or 80% of all the USDT in existence today.

This is expected to change, however, as large exchanges are now increasingly supporting deposits and withdrawals of Tether on alternative (i.e., non-OMNI) blockchains as illustrated below.

Binance has both an ERC20 USDT and a TRC10 USDT wallet.

In contrast to USDT, EURT (EUR Tether) runs solely on the Ethereum blockchain, with a total supply slightly above EUR50 million.

Over time, the proportion of USDTs minted on Ethereum/Tron relative to total supply has grown to be much higher than before, as illustrated by the chart below from the end of 2018, when ERC-20 USDT marked just a small, small sliver of the entire USDT supply.

3.1.2 Ontology’s support of the PAX stablecoin

Ontology recently announced that it will partner with Paxos to issue a collateralized stablecoin based Ontology's OEP-4 token standard while keeping its existing ticker “PAX”.

For Ontology, this would allow greater participation of individuals and institutions into the Ontology decentralized ecosystem. Eventually the team would “enable atomic swaps between the Ontology-based main blockchain and other blockchains” in order to make it easier to transact stable units with its technology.

For Paxos, it would enable the company to further differentiate from other stablecoin issuers such as Circle or TrustToken, and potentially to obtain a “stablecoin monopoly” for decentralized applications running on Ontology. This may be a recurring trend for many stablecoin issuers and chain pairs, leading to future pairing of specific blockchains with stablecoin issuers marking the end of blockchain agnosticism for these issuing companies.

USD 100 million worth of PAX tokens are reportedly going to be issued on the Ontology blockchain in May-June 2019. It remains to be seen which exchanges will also start accepting deposits and withdrawals of this token. However, the main goal of this partnership appeared to be aimed at in-dApp usage, rather than trading. 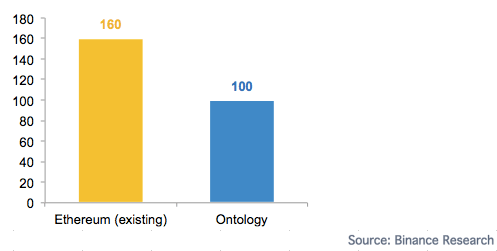 TrustToken, the company behind TUSD, which launched in March 2018, announced consecutively in April 2019 that TrueGBP6 and TrueAUD7 tokens, along with future support of a wider range of fiat currencies, namely CAD & HKD (2019 Q2) and EUR (2019 Q3) in the roadmap.

What are the potential implications of the ever-increasing range of fiat collateralized stablecoin that are non-USD denominated?

Facebook is reportedly working on its own blockchain solution for a future stablecoin tentatively named “Facebook Coin” (also referred to as “Project Libra”).

This digital currency is expected to be integrated into Whatsapp, the popular messaging service previously acquired by Facebook, to allow users to transfer money to each other8.

More technical details on Project Libra are still unknown, including whether this digital currency would run on an existing blockchain or a new one built from scratch, and whether its blockchain would be public or private (such as an implementation of Quorum with the JPM Coin).

Regardless, Facebook has an entire ecosystem across its Facebook, Messenger, Whatsapp, and Instagram products that could integrate this future digital currency. With a user base in the billions, end use-cases could span from international remittances to payment for premium content (e.g., games) for individual users and services such as advertising campaigns, etc. for businesses.

The project is led by David Marcus (ex-Paypal president9) and, as noted by Barclays analyst Ross Sandler, has the potential to generate new income-generating sources for Facebook.10

Four core scenarios can be drawn for this chain/coin, based on two independent variables: whether the chain is public or private, and whether there is a central authority, a la Ripple, or not:

While it is difficult to predict what this project will ultimately result in, this blockchain is likely to be private (or partially private) with some degree of authority from Facebook itself. In a similar fashion to the JPM Coin, this project could constitute a stepping stone in mass-adoption for cryptocurrency and other digital assets while contributing to the “unbanking” of the payment industry.

On April 24th, Samsung was reportedly11 building its own blockchain on top of Ethereum. This announcement follows the hype about the Samsung Galaxy S10, the company’s flagship phone, which features an integrated Ethereum wallet, and also echoes the company’s focus on blockchain given its recent investments from the Korean company into several prominent blockchain-based companies such as Ledger12.

While “Samsung Coin” may not be a pegged currency (very few details have been provided at this stage), it remains a strong possibility that it will be a price-stable currency, as the stability would allow for easier integration across the entire ecosystem of Samsung services and devices.

Initial reports indicate that this blockchain could be a hybrid in structure, with potential private elements such as a private-public state option (similar to that to JP Morgan’s Quorum). However, the exact consensus mechanism and nature of the blockchain, i.e., “whether it would be a permissioned or permissionless network?”, remains unknown.

Unsurprisingly, collateralized stablecoins are continuing to gain popularity but major differences in stablecoins exist from a trading perspective. BTC markets are dominated by Tether with greater liquidity represented by lower spreads and higher volumes than other stablecoins.

Excluding StableUSD (USDS), all other stablecoins exhibit similar liquidity profiles but USD Coin (USDC) and Paxos (PAX) exhibited slightly lower spreads than TrueUSD (TUSD) in April 2019. Most of the stablecoins also received more deposits than withdrawals during the first four months of 2019, with recent large inflows in April for Paxos and USD Coin.

Competing for market share, these stablecoin providers are becoming increasingly innovative in their product offering:

These may lead to long-term benefits such as additional channels for global remittance, greater price efficiency for non-USD cryptocurrency exchanges or the development of blockchain FX exchanges, either off or on-chain.

The digital asset industry is seeing wider interest from non-financial institutions and its future may be fueled by these large institutional players creating tradable assets running on public blockchains, hence championing the use of blockchain as the key technology for all digital wallets.

These non-financial companies (e.g., Facebook or Samsung) are likely to be less risk-averse than traditional financial companies, and have greater incentive to disrupt the payments industry, with the added ability to execute at a faster, scalable pace. As a result, these companies may help defining future key growth drivers for both the global payment and the digital asset industry.