Cryptoasset markets exhibited wild movements in USD prices between 2017 and 2018. Bitcoin moved from a low of $735 to a peak of $19,800 in 2017, before finishing 2018 below $4,000. Ethereum, the second largest cryptoasset by market capitalization, moved from $8 to a peak of $1,440, before closing 2018 at a price below $150. Cryptoassets are generally known to move in similar directions. However, conducting correlation analysis across multiple time periods reveals additional elements that may influence the strength and direction of these correlations.

1. Three-month correlations within the cryptoasset market

In general, assets with a correlation above 0.5 or below -0.5 are considered to have strong positive/negative correlations. Conversely, a close-to-zero correlation indicates no linear relationship between two variables, and for the purpose of this analysis, the returns of two assets.

1.1 Cryptoassets exhibited high correlations in USD terms at the beginning of 2019

To explore correlations between cryptoassets, the top 30 largest cryptoassets by 90-day average market cap were selected and their USD returns were calculated in order to create a correlation matrix as seen below.

Based on this analysis, correlations are highest between altcoins and Bitcoin itself (~ average correlation of 0.78), indicating that most of the altcoins move in similar directions as Bitcoin, underscoring Bitcoin’s status as a bellwether for cryptoasset markets.

While, generally speaking, altcoins are highly correlated with BTC, select cryptoassets exhibit materially weaker correlations both with BTC and among one another, which suggests that additional idiosyncratic factors may affect the prices and returns of these assets.

While this report doesn’t intend to provide a direct explanation for specific weaker correlations, some recent news adds additional context that may be informative in understanding possible reasons for these lower correlations.

1.1.1 Possible idiosyncratic factors and events influencing correlations over this period:

Of the top 30 market cap coins previously highlighted, only three of them are not listed on Binance - Dogecoin (DOGE), MakerDao (MKR) and Tezos (XTZ). These three cryptoassets exhibit lower than average correlations, which could be a function of less liquidity, resulting in thinner order-books and increased difficulty for investors to buy and sell them with similar frequencies as the other listed assets. Although this is a preliminary observation, these relationships may exist and merit further consideration in future reports.

Broadly speaking, the observation that consensus mechanism may influence correlations among cryptoassets has already been highlighted in previous reports4, but still requires additional investigation as new protocols are built leveraging novel consensus mechanisms.

1.2 BTC returns exhibited lower correlations at the beginning of 2019

In order to analyze correlations of returns across cryptoassets, it is instructive to compare returns of the same assets (top 30 largest coins by 3-month avg. market cap) in both USD and BTC terms over the same time horizon.

Correlations in BTC returns are important as BTC remains one of the best price indicators of crypto markets for two key reasons:

For the purposes of comparing BTC and USD returns of this asset class, it is important to understand the components that comprise BTC returns.

For every cryptoasset, its USD return can be broken down into two ../components:

Therefore, for any cryptoasset (referenced below as “ABC”), its return can be expressed as:

As a result, cryptoasset returns - calculated based on Bitcoin prices - can be viewed as Bitcoin-adjusted returns.

The correlations of the same subset of coins (DOGE, WAVES, BSV, TRX, BNB) with other assets are once again relatively lower than the average correlation among the entire basket of cryptoassets. Consequently, it appears that the same baskets of assets, whether calculated in USD or BTC returns, displayed lower correlations than their peers.

Lastly, the existence of a Binance effect also appears in BTC returns correlations. Similar to observations from correlations in USD returns, Dogecoin (DOGE), MakerDao (MKR) and Tezos (XTZ) exhibit lower correlation than the average correlation among selected cryptoassets for this analysis.

In addition, PoW coins also exhibited stronger correlations among one another when using Bitcoin-adjusted returns, as was observed in the USD returns dataset.

Given cryptoassets exhibited lower correlations in BTC returns than in USD returns over the previous 90 days, the same findings were compared to the dataset during a 3-month period both one year before and six months before to understand how the macro environment may have affected correlations.

Comparison of the most recent 3-month correlation matrix with the same period one year prior highlights that USD returns have stronger correlations now than in the previous time period.

The extreme volatility in crypto markets from late 2017-early 2018 may have contributed to the weaker correlation amongst cryptoassets as a whole.

Once again Dogecoin (DOGE) had a lower correlation than the other assets whereas NEM’s average correlation with all assets spiked compared to six months prior.

NEM exhibited the lowest correlation with other coins between December 2017 and March 2018, prior to listing on Binance. A few months after being listed on Binance5 correlations subsequently rose, which underscores a potential “Binance Effect” as previously described. Yet, this single observation is not enough to state a general rule such as “assets not listed on Binance must necessarily exhibit lower correlations” and requires further investigation.

Although correlations among other cryptoassets were higher during this period, ETC's lower correlation may be partially explained by idiosyncratic factors such as becoming listed on Coinbase in August 20186.

2.3 Does the rise of stablecoins explain increased correlations?

2018 was a bear market year as prices crumbled during the first half of the year and then decreased slowly until a bottom around December.

While the bear market appears to be the most obvious explanation to the increase in cryptoasset correlations (using USD returns), the increased availability of stablecoin trading pairs and listings, as illustrated in our last report7, has led to a material growth in proportion of stablecoin-enabled trading volume versus total cryptoasset trading volume. This could be another factor to consider in evaluating correlations from today’s cryptoasset markets.

Only one year ago, stablecoin volume represented less than 10% of total cryptoasset trading volume (e.g., Binance had only 5 USDT trading pairs8 as of February 28th 2018).

During the peak of the bull market (mid-December 2017), speculators used BTC/ETH bought on fiat exchanges to deposit funds onto cryptocurrency exchanges such as Binance or Bittrex to trade immediately into altcoins.

Given these crypto-to-crypto exchanges contributed a large portion of total volume in the industry, most of the cryptoassets used in this correlation analysis were traded solely against BTC, which could explain why their BTC returns had stronger correlations in previous periods than in the most recent period (as many of these large cap assets are now also paired with stablecoins).

Prior to mid-2018, in order to buy/sell coins such as XMR, the highest volume trading pair was XMR/BTC. During large sell-offs or purchases of altcoins, they all exhibited similar price movements in BTC.

Today, cryptoasset trading pairs are no longer BTC-dominated. As of March 2019, most of the largest cryptoassets by market capitalization are now directly traded against stablecoins (USDT as the most popular).

For example, NEO was one of the first coins to be listed on Binance and was extremely popular in 2017. 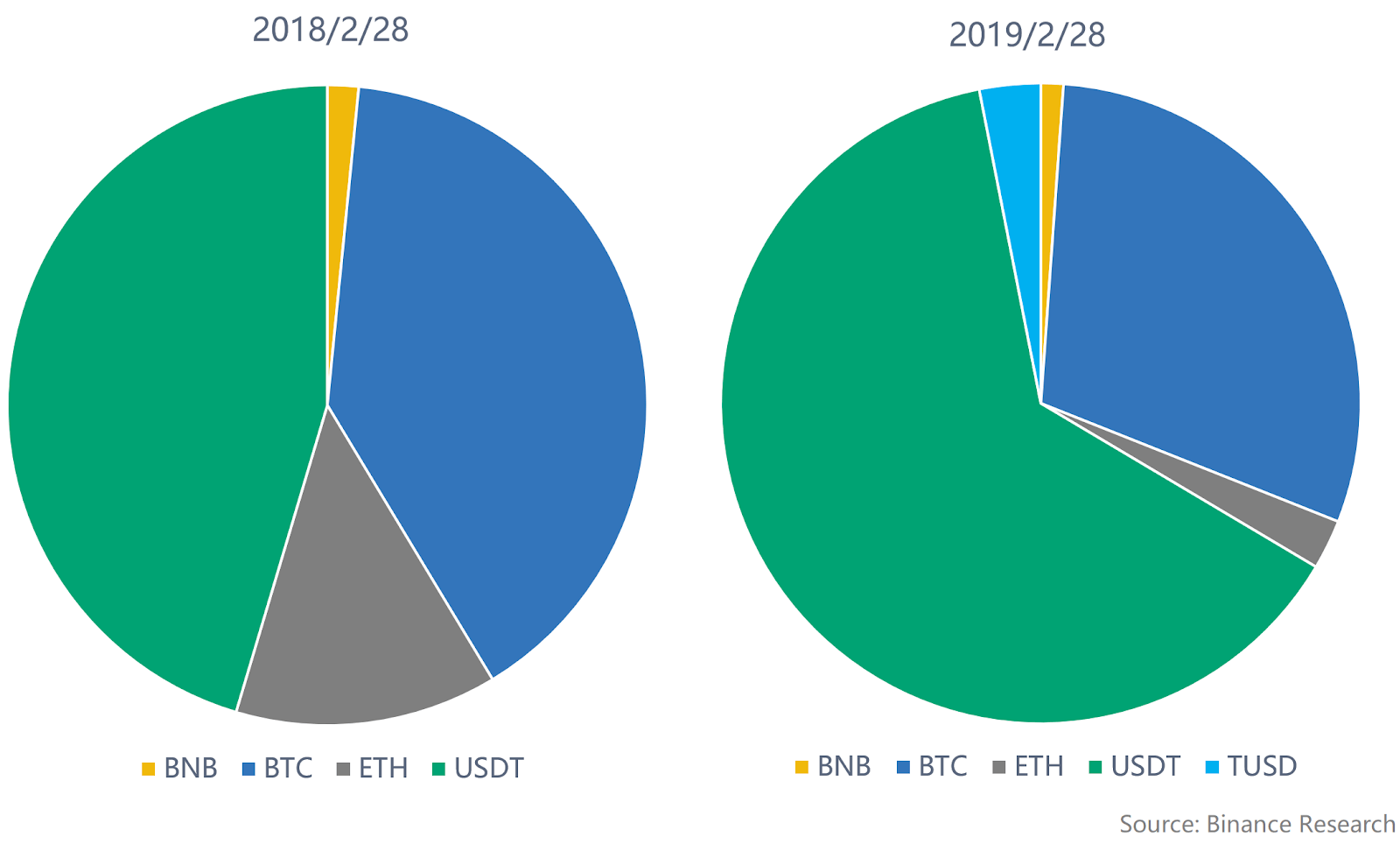 As of February 28th, 2019, the contribution of the stablecoin pair volume to total Binance volume of NEO increased to 66%, compared to 45% a year ago, taking over the majority of ETH and BTC pair volumes.

NEO is not alone; in fact, most of the assets didn’t even have a stablecoin pair on Binance in April 2018. Today, a large majority of the top market capitalization coins do have a “stable counterparty”.

This trend is not confined to crypto-to-crypto exchanges like Binance - fiat exchanges have also started increasing the number of cryptoasset offerings on their platforms, thereby providing more direct fiat onramps and trading pairs for altcoins. As an example, Coinbase has 17 cryptoassets (and 38 corresponding pairs) as of March 1st, 2019 and continues to explore adding a variety of additional cryptoassets to the platform9.

While these changes in correlations coincided with the rise in stablecoin volume and stablecoin trading pair offerings across exchanges, the analysis reveals additional idiosyncratic factors that should be considered when constructing an optimal cryptoasset portfolio.

As this report primarily relied on large market-cap cryptoassets and their performance over a limited time horizon (15 months) that was predominantly a bear market, further analysis across longer time periods, small / medium market-cap assets and additional macro environments can be conducting to augment these findings.