Tokens on the Theta blockchain are used to encourage individual users to share their idle computing and bandwidth resources as caching or relay nodes for video streams. This design aims to improve the quality of stream delivery and solves the "last-mile" delivery problem, which is the main bottleneck for traditional content delivery pipelines, especially so for high-resolution, high bitrate 4k, 8k, and next-generation streams.

Theta uses a two-token model with the following use-cases.

Theta’s mission is to create the first decentralized video streaming and delivery network, whereby video viewers are incentivized to share redundant computing and bandwidth resources to address today’s video streaming challenges. Using the Ethereum's “World Computer” metaphor, the Theta Network can be viewed as the “World Cache” formed by the memory and bandwidth resources contributed by viewers.

Viewers are now rewarded to participate in the network by sharing excess bandwidth and resources. The tokens act as an incentive mechanism, as they relay video streams to other users. Not only does the Theta Token motivate viewers to join the network as caching nodes, it also greatly improves the streaming market efficiency by streamlining the video delivery process. Within the Theta Network, advertisers can also directly target viewers at a lower cost, viewers earn Theta Tokens for their attention and engagement with their favorite content, and influencers earn Theta Token as gifts directly from viewers. Recently, an alpha build of the Edge Cacher was developed. The Edge Cacher will allow users with adequate technical specs to serve as a dedicated relay node, able to serve orders of magnitude more video data than current relay methods.

This decentralized peer-to-peer network delivers streams efficiently globally, through the Theta Mesh Delivery Network made up by the Peers. Each peer node may act both as a viewer, a caching node or both. As the node launches, during the handshake step, it retrieves a list of candidate peers from the geo-optimised server for the livestream it’s playing. Then, it performs a speed and availability test to select a subset that has optimized performance, connectivity and can reliably provide the video stream segments. The client performs the speed and availability tests regularly during a live stream session and continuously refines its neighbor list.

With Theta, video platforms no longer need to build expensive infrastructure, which would mean more innovation and unique business models.

For end-users, Theta's focus is on providing a seamless way to interact with and contribute to the Theta ecosystem. These include products such as the wallet, block explorer, edge cacher nodes, and Guardian nodes. The official Theta wallet is available on mobile for iOS and Android, and also as a web-based version.

The Theta wallet is used for community members to participate in the mainnet token-swap and will operate as a secure way for users to hold THETA and TFUEL.

The block explorer has recently undergone an upgrade, and additional features will continually be added in the future. Guardian nodes allow users to contribute to the consensus of the network by finalizing blocks that Validator nodes have proposed. Before the full rollout of the Guardian nodes, users have an opportunity to participate in the Guardian Node Onboarding Program, where users' equipment is evaluated based on tech specs, node uptime, and other criteria.

According to the Theta Network management team, there are over 500,000 unique sessions across live testnet channels (such as SLIVER.TV, Samsung VR, and MBN) where a user shared video stream/bandwidth with another local user. Whenever a video segment was shared, a microtransaction was recorded on the Theta testnet.

The Theta management team expects the key metrics of the recently (May 27th) launched mainnet, as follows: 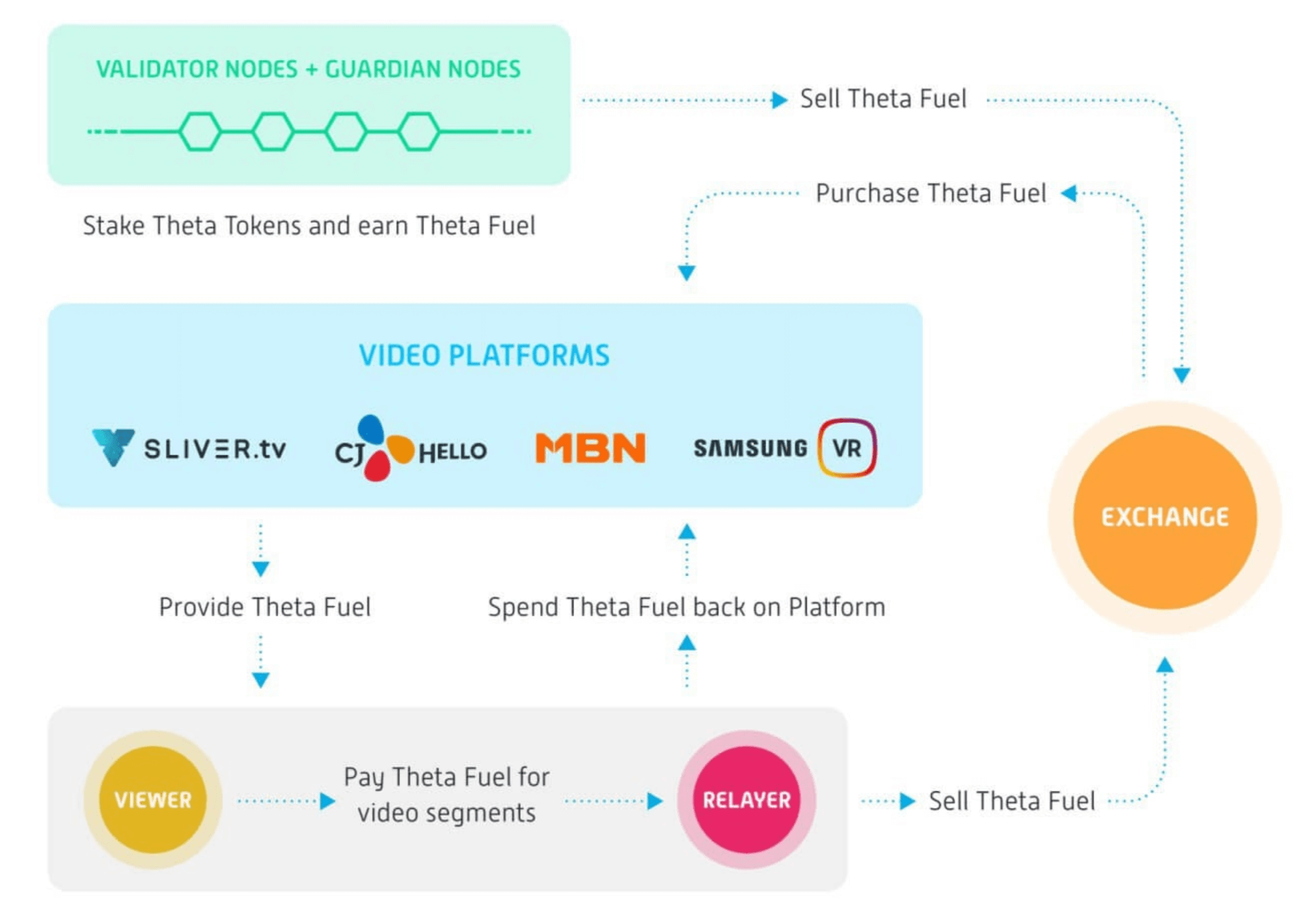 In Theta's multi-Level BFT consensus, 10–20 Validator nodes make up a smaller committee to produce and validate new blocks to be added to the Theta blockchain. Guardian nodes are a second node type that makes up a "second line of defense" of a large number of community-run nodes that download and examine the Theta blockchain and try to reach consensus on finalized checkpoints.

The name "Multi-Level BFT consensus mechanism" reflects the fact that the Validator/Guardian division provides multiple levels of security guarantees. With thousands of nodes, it is substantially more difficult for attackers to compromise blockchain integrity, and thus the blockchain has a much higher level of security. The design is aimed to achieve a good balance between transaction throughput, consistency, and level of decentralization. Validator and Guardian nodes stake THETA and participate in block production and transaction processing. In return, they earn TFUEL, which powers bandwidth/video relaying. Video platforms demand TFUEL and provide it to their users to allow video relaying on their platform.

Relayers receive TFUEL as a reward for relaying and may spend it back on the video platform for premium content, subscriptions, and the like.

Validator nodes have a minimum stake of 10,000,000 THETA and will initially be run by Theta Labs, with close partners and video platforms, to follow in Q2 2019. The Guardian node functionality is now live, with some Validator slots filled by community-run Guardian nodes on a rotating basis. The minimum number of tokens to operate a Guardian node is 100,000 THETA. The team states that having a relatively high minimum token requirement for nodes would enhance security, as it makes attacks more expensive.

The supply of TFUEL token will grow by an annual rate set at the protocol-level. The initial target is a 5% annual increase. The new supply from each block will be distributed to each Validator and Guardian node on a stake-weighted basis. For instance, if a node stakes 5MM out of a total of 500MM staked THETA, it will earn 1% of the new TFUEL generated each block. Block rewards for Guardian nodes are distributed every 50 blocks, since that is the block finalization interval. There is no difference between the stake-weighted amount of rewards for Validator nodes and Guardian nodes; both earn according to their proportion of stake versus the total number of THETA staked in the protocol. Due to the fact that Validator nodes are required to stake more tokens, they will also earn much more in TFUEL rewards in nominal terms. There are no tiers to reward earnings aside from the differences as mentioned earlier.

Theta made three technical design choices that has drastically shaped the entire project. One of those, the consensus mechanism (Multi-Level Byzantine Fault Tolerant), has already been discussed in depth, whereas the other two are:

The following chart represents the number and breakdown of all THETA tokens that are to be released into circulation on a monthly basis.

THETA has been on time for most communicated milestones. The team explains the two late milestones as impacted by the partnerships with Samsung VR, MBN, and CJ Group, which were very resource-demanding.

Primary markets for Theta Network are in the U.S. and Korea, with China also becoming increasingly important. Theta Network is a U.S. company and the investors of Theta are primarily U.S. based.

To engage their community, the Theta team has previously held community events in Seoul back in June 2018 with Zilliqa, Kyber, IoTeX, and Quantstamp.

The Theta management team believes the launch of the Guardian node onboarding program, as well as the upcoming Universal Edge Caching nodes, would give them an edge in community development.