A Protocol For Inter-Blockchain Liquidity.December 6th 2018
Share this article

This project report is from December 2018.

1. What is Republic Network (REN)?

Republic Protocol utilizes secure multi-party computation ("sMPC") to match orders without exposing the price or volumes of the orders. The Project aims to have its dark pool exchanges support large volume trades, with minimal price slippage and market impact while adhering to the rules of the dark pool.

The Republic Protocol has various features that contribute to its decentralized dark pool ecosystem as highlighted below:

Republic Protocol launched its mainnet beta in Sep 2018, with the project team running all 24 Darknodes on the platform.

The project's mission is to build a fair means of exchange for the financial tools and digital assets of the future.

The REN token is currently used as means of payment for trading fees on the RenEX mainnet beta. REN will also be used as a bond that traders and Darknodes have to stake in order to participate in the RenEx Dark Pool exchange.

2.3 Token governance and use of funds

As of 23 Nov 2018, 90% of funds have been used for hiring developers and marketing staff. The remaining 10% has been for legal, administrative and compliance expenses. Republic Protocol did not reveal the total amount used out of their funds raised.

(*) Of the 19.9% of tokens that were originally allocated as Reserve tokens, only a portion has been sold, with the rest to be released at a yet-to-be determined future date, hence the total of 91%

Republic Protocol has successfully completed the majority of their announced milestones within the communicated timeframes and has achieved some additional milestones not disclosed in the original roadmap, including the upgrade of their P2P network and the design and development of the RenVM. The Project has also released an updated roadmap on 15 Nov 2018, with key milestones through Q2 2019.

TrueUSD: Republic Protocol will partner with TrueUSD for its crypto-fiat on and off ramp. TrueUSD will also be the stablecoin of choice on the RenEx platform.

Order fragments are constructed in such a way that the order matching computations can use any function, applied over a polynomial, and can involve two or more underlying orders. This results in flexible order matching computations where nodes can match orders based on exact price points, partially matched orders, and match cross pairs (e.g., BTC/ETH then ETH/REN and then REN/BTC where direct REN/BTC pairs cannot be found) of orders to increase liquidity. 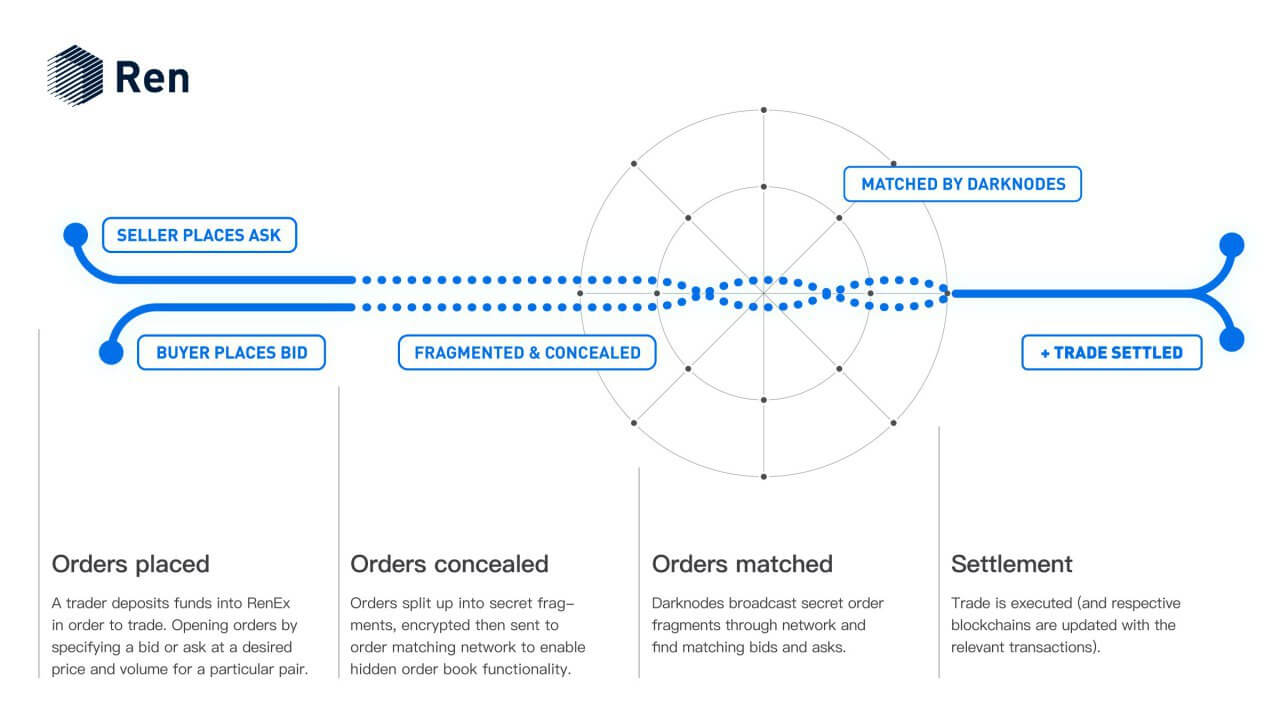 Nodes race to discover order matches and any match that is found must be registered so that other nodes can see which orders have been closed. Associated traders are notified and none of the matched orders can be involved in future matches. This process is done on the Ethereum network and if two orders do not match, they will continue to be used in future matching games. Traders can specify an expiry of up to 24 hours or cancel their order unless it has already been matched. Any fees associated with an unmatched order will be refunded upon expiry or cancellation of the order.

The Republic Protocol also includes an atomic swapping protocol that is initiated between traders that have had their orders matched. Nodes facilitate passing messages (and where possible, setting up a direct P2P connection between traders) that execute the order. Traders cannot be bound to execute on the orders, due to the limited way in which blockchains can communicate. However, the project believes that by making traders post bonds in the form of REN tokens, traders will be heavily incentivized to faithfully execute orders.

Traders pay an order fee in REN when submitting an order. If the order expires before it is matched, the order fee is refunded to the trader. Any node that participates in the decentralized computation for an order that has been matched receives a share of the order fee (the shares are calculated by evenly splitting the order fee amongst all of the participating nodes). The order fee will be variable — orders with higher order fees will be favored by the order matching nodes. All order matches result in two payouts to each participating node, one from each side of the match. The only information available to the node is the amount of REN that they will receive upon successfully matching an order.

Currently, the fee structure on the RenEx mainnet beta is a flat fee of 0.2% per trade on both sides (maker and taker). 80% of the cumulative 0.4% fee will go to Darknodes while the remaining will be kept by RenEx and used for its Liquidity incentive program (20% of the fees collected are used to incentivize liquidity in the platform in the form of rebates to market makers and liquidity providers). The RenEx fees are currently determined by the Republic Protocol team in order to maintain the competitiveness of the RenEx.

Orders are secured by breaking them down into several order fragments that are distributed throughout the network. In order to prevent Sybil attacks and provide a simple identity mechanism, traders and nodes must submit a bond in REN before they are allowed to access the network. This bond is associated with a single identity in the registrar smart contract of the protocol and the registration status can be queried by anyone. The bond is refunded in full when the trader or node leaves the network. The bond is slashed if the network detects malicious behavior, ensuring the security of the network through incentive mechanisms.

Traders are free to submit a flexible bond amount, with higher amounts allowing a higher number of parallel open orders. The threshold of the bond will be set dynamically and high enough such that it requires a sufficiently large financial commitment from participants. Both traders and nodes will not be allowed to participate unless their bond posted is above the threshold.

The mechanics of setting the bond threshold is currently under development. The Project has plans to set a 100,000 REN bond required to run a Darknode, which will allow a maximum of 10,000 nodes due to the fact that there is a total supply of 1,000,000,000 REN. The bond can be updated by the owner of the contracts (which would also update the maximum number of nodes). Republic Protocol has mentioned that the bond threshold will eventually be a Decentralized Autonomous Organization ("DAO") controlled by voting, giving the token a governance use case as well.

Republic Protocol has a global community with a concentration in China and Europe. Republic Protocol is taking a community-first approach driven by core supporters. The Project has established a REN Ambassadors program to engage with the community and produce content. With the introduction of RenVM, Republic Protocol will also engage the wider blockchain developer community.

Republic Protocol's core strategy is to grow the core user base through online channels, specifically Twitter, where they frequently receive hundreds of thousands of impressions on their posts.

Metrics and information about the network will become available to the community through a public netstats website. This will show how the network is growing: number of transactions, percentage of tokens bonded into Darknodes, and revenue earned. Real-time volume-based fee metrics will not be possible due to the nature of the private computations, but delayed volume-based fee metrics will be available.