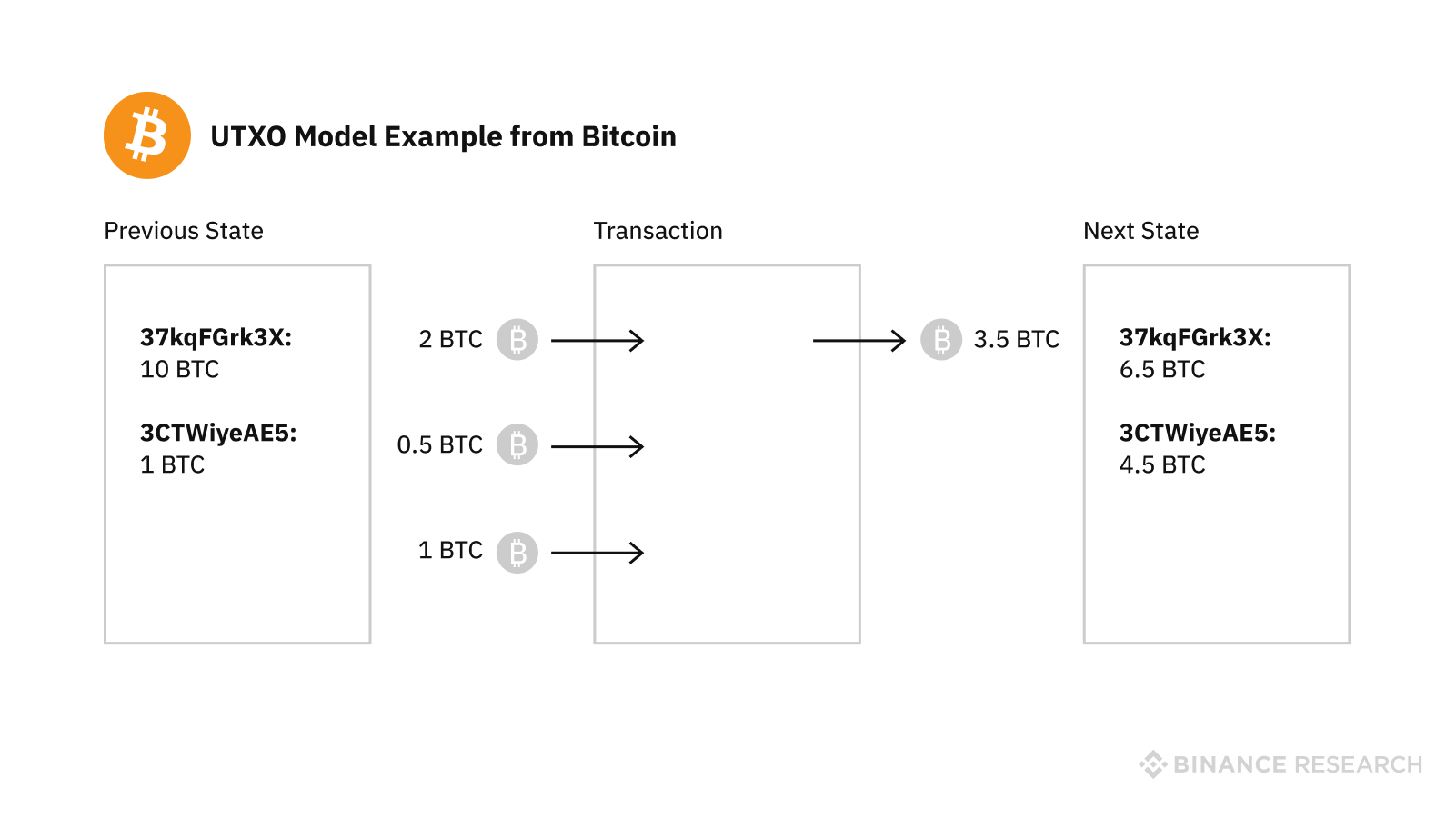 In the Bitcoin network, anyone can join the network and become a bookkeeping service provider i.e., a validator. All validators are allowed in the race to become the block producer for the next block, yet only the first to complete a computationally heavy task will win. This feature is called Proof of Work (PoW).

Since anyone can join the race, competition is prone to increase. In the early days, Bitcoin mining was mostly done by personal computer CPUs.

As of today, Bitcoin validators, or miners, have opted for dedicated and more powerful devices such as machines based on Application-Specific Integrated Circuit ("ASIC").

Proof of Work secures the network as block producers must have spent resources external to the network (i.e., money to pay electricity), and can provide proof to other participants that they did so.

With various miners competing for block rewards, it becomes difficult for one single malicious party to gain network majority (defined as more than 51% of the network's hash power in the Nakamoto consensus mechanism). The ability to rearrange transactions via 51% attacks indicates another feature of the Nakamoto consensus: the finality of transactions is only probabilistic.

Once a block is produced, it is then propagated by the block producer to all other validators to check on the validity of all transactions in that block. The block producer will receive rewards in the network’s native currency (i.e., bitcoin) as all validators approve the block and update their ledgers.

The Bitcoin protocol utilizes the Merkle tree data structure in order to organize hashes of numerous individual transactions into each block. This concept is named after Ralph Merkle, who patented it in 1979.

With the use of a Merkle tree, though each block might contain thousands of transactions, it will have the ability to combine all of their hashes and condense them into one, allowing efficient and secure verification of this group of transactions. This single hash called is a Merkle root, which is stored in the Block Header of a block. The Block Header also stores other meta information of a block, such as a hash of the previous Block Header, which enables blocks to be associated in a chain-like structure (hence the name "blockchain").

An illustration of block production in the Bitcoin Protocol is demonstrated below.

Block time is the period required to create the next block in a network. As mentioned above, the node who solves the computationally intensive task will be allowed to produce the next block. Therefore, block time is directly correlated to the amount of time it takes for a node to find a solution to the task. The Bitcoin protocol sets a target block time of 10 minutes, and attempts to achieve this by introducing a variable named mining difficulty.

What are orphan blocks?

In a PoW blockchain network, if the block time is too low, it would increase the likelihood of nodes producing orphan blocks, for which they would receive no reward. Orphan blocks are produced by nodes who solved the task but did not broadcast their results to the whole network the quickest due to network latency.

It takes time for a message to travel through a network, and it is entirely possible for 2 nodes to complete the task and start to broadcast their results to the network at roughly the same time, while one’s messages are received by all other nodes earlier as the node has low latency.

Imagine there is a network latency of 1 minute and a target block time of 2 minutes. A node could solve the task in around 1 minute but his message would take 1 minute to reach the rest of the nodes that are still working on the solution. While his message travels through the network, all the work done by all other nodes during that 1 minute, even if these nodes also complete the task, would go to waste. In this case, 50% of the computational power contributed to the network is wasted.

The percentage of wasted computational power would proportionally decrease if the mining difficulty were higher, as it would statistically take longer for miners to complete the task. In other words, if the mining difficulty, and therefore targeted block time is low, miners with powerful and often centralized mining facilities would get a higher chance of becoming the block producer, while the participation of weaker miners would become in vain. This introduces possible centralization and weakens the overall security of the network.

However, given a limited amount of transactions that can be stored in a block, making the block time too long would decrease the number of transactions the network can process per second, negatively affecting network scalability.

Segregated Witness, often abbreviated as SegWit, is a protocol upgrade proposal that went live in August 2017. 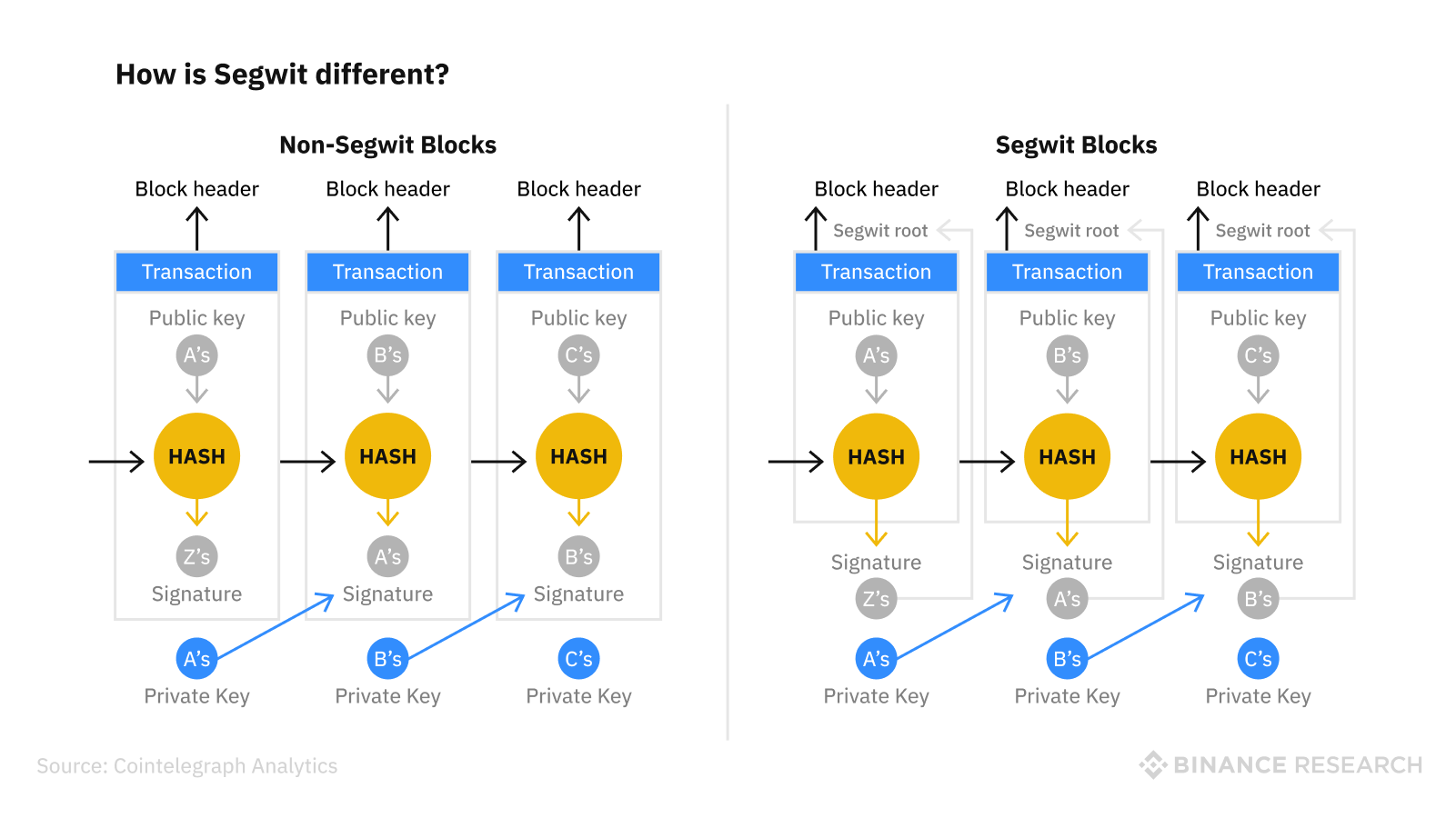 The legacy Bitcoin block has a block size limit of 1 megabyte, and any change on the block size would require a network hard-fork. On August 1st 2017, the first hard-fork occurred, leading to the creation of Bitcoin Cash (BCH), which introduced an 8 megabyte block size limit.

Conversely, Segregated Witness was a soft-fork: it never changed the transaction block size limit of the network. Instead, it added an extended block with an upper limit of 3 megabytes, which contains solely witness signatures, to the 1 megabyte block that contains only transaction data. This new block type can be processed even by nodes that have not completed the SegWit protocol upgrade.

Furthermore, the separation of witness signatures from transaction data solves the malleability issue with the original Bitcoin protocol. Without Segregated Witness, these signatures could be altered before the block is validated by miners. Indeed, alterations can be done in such a way that if the system does a mathematical check, the signature would still be valid. However, since the values in the signature are changed, the two signatures would create vastly different hash values.

Since the mathematical values are the same, the altered signature remains a valid signature. This would create a bookkeeping issue, as transactions in Nakamoto consensus-based blockchain networks are documented with these hash values, or transaction IDs. Effectively, one can alter a transaction ID to a new one, and the new ID can still be valid.

This can create many issues, as illustrated in the below example:

Since the transaction malleability issue is fixed, Segregated Witness also enables the proper functioning of second-layer scalability solutions on the Bitcoin protocol, such as the Lightning Network.

Lightning Network is a second-layer micropayment solution for scalability.

A list of curated resources relevant to Lightning Network can be found here.

In the Lightning Network, if a customer wishes to transact with a merchant, both of them need to open a payment channel, which operates off the Bitcoin blockchain (i.e., off-chain vs. on-chain). None of the transaction details from this payment channel are recorded on the blockchain, and only when the channel is closed will the end result of both party’s wallet balances be updated to the blockchain. The blockchain only serves as a settlement layer for Lightning transactions. 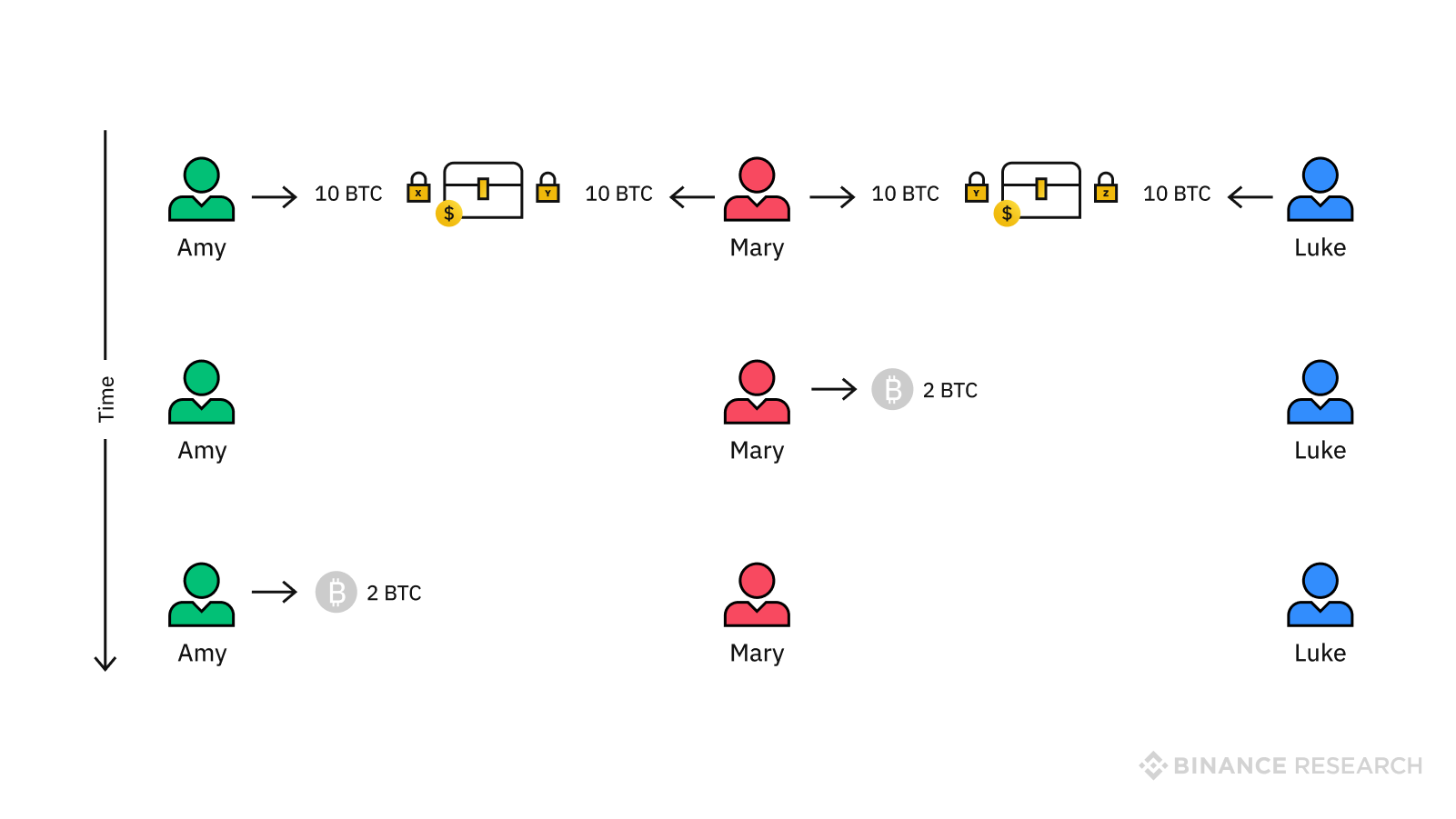 One limitation to the Lightning Network is that it requires a person to be online to receive transactions attributing towards him. Another limitation in user experience could be that one needs to lock up some funds every time he wishes to open a payment channel, and is only able to use that fund within the channel.

However, this does not mean he needs to create new channels every time he wishes to transact with a different person on the Lightning Network. If Alice wants to send money to Carol, but they do not have a payment channel open, they can ask Bob, who has payment channels open to both Alice and Carol, to help make that transaction. Alice will be able to send funds to Bob, and Bob to Carol. Hence, the number of “payment hubs” (i.e., Bob in the previous example) correlates with both the convenience and the usability of the Lightning Network for real-world applications. 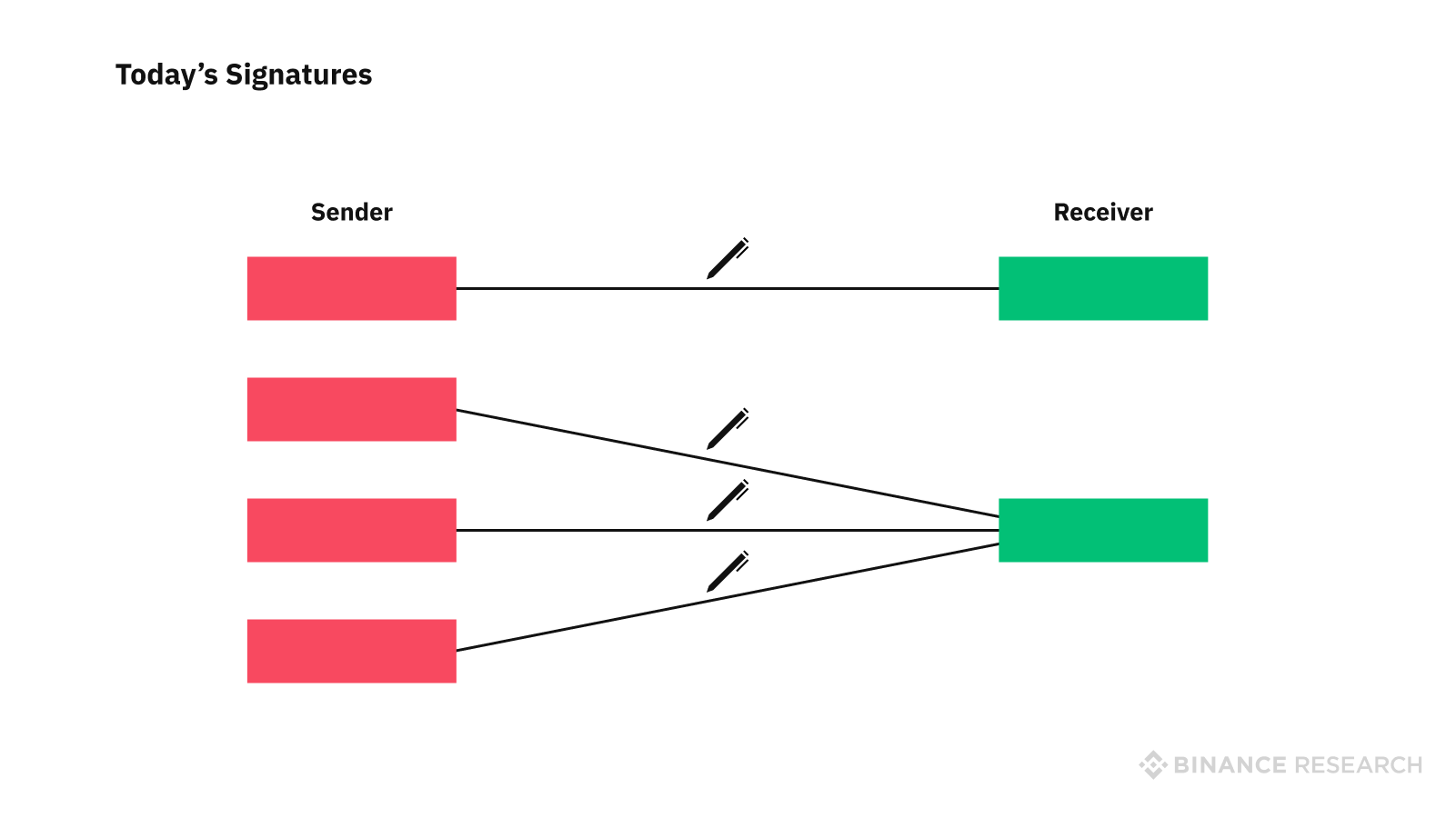 However, many developers now advocate for replacing ECDSA with Schnorr Signature. Once Schnorr Signatures are implemented, multiple parties can collaborate in producing a signature that is valid for the sum of their public keys.

This would primarily be beneficial for network scalability. When multiple addresses were to conduct transactions to a single address, each transaction would require their own signature. With Schnorr Signature, all these signatures would be combined into one. As a result, the network would be able to store more transactions in a single block. 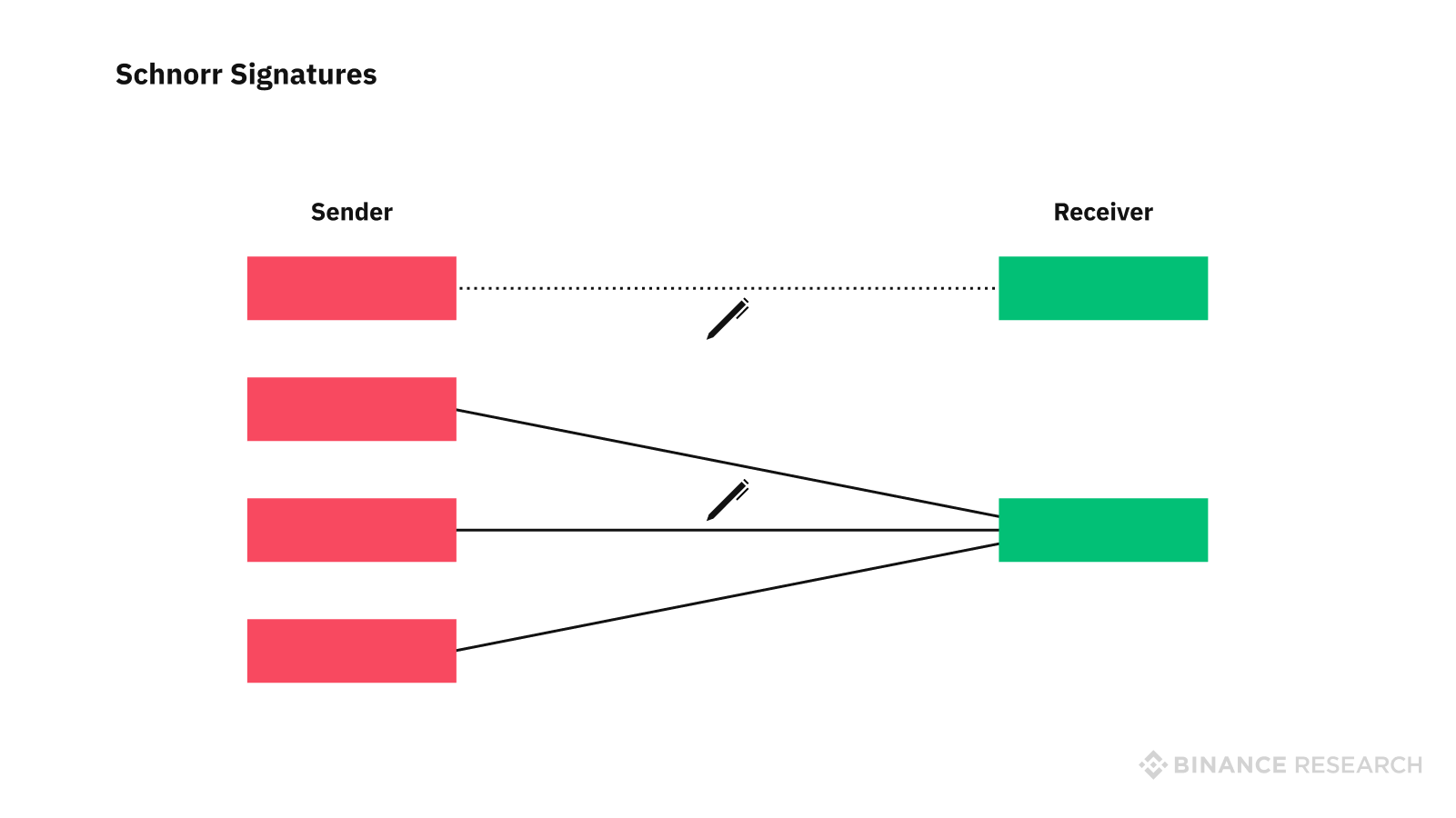 The reduced size in signatures implies a reduced cost on transaction fees. The group of senders can split the transaction fees for that one group signature, instead of paying for one personal signature individually.

The Bitcoin protocol utilizes the Nakamoto consensus, and nodes validate blocks via Proof-of-Work mining. The bitcoin token was not pre-mined, and has a maximum supply of 21 million. The initial reward for a block was 50 BTC per block. Block mining rewards halve every 210,000 blocks. Since the average time for block production on the blockchain is 10 minutes, it implies that the block reward halving events will approximately take place every 4 years.

As of May 12th 2020, the block mining rewards are 6.25 BTC per block. Transaction fees also represent a minor revenue stream for miners.

Bitcoin is an open-source project with global development communities and more than 600 contributors on GitHub, as of the time of writing.

Development activities can be found here.

A more complete list can be found on bitcoin.org and in the public GitHub repository for the Bitcoin protocol.