GoChain (the "Project") is a decentralized blockchain network that uses Proof of Reputation as a consensus model to support smart contracts and distributed applications. The Project aims to be the following:

GoChain's primary mission is to be "10x more decentralized, 100x faster and 1,000x greener (less energy used to run the network) than Ethereum." The Project would also like to remain Ethereum compatible so that users can use GoChain without changing their code or developer tools.

GO tokens are paid out as transaction fees to trusted nodes run by up to 50 authorized signers who create, sign, and distribute blocks to other nodes. A list of authorized signers is maintained on the blockchain and they are rewarded with GO tokens for each signed block.

The following chart represents the number and breakdown of all GO tokens released into circulation on a monthly basis from May 2018 (token sale date) to March 2021, at which point all GO tokens are expected to be in circulation.

As of October 2018, Gochain has already used approximately 50% of its ICO funds on the following activities in the ratios below:

All remaining token sales proceeds are locked in a multi-sig cold wallet which requires both the team's and their lawyers' keys to access.

The Top 10 token holders are highlighted below:

GoChain has hit the milestones that they originally set out in the ICO, the most significant of which was launching their mainnet launch in May 2018. GoChain's latest focus has been on rewriting the storage engine to support a much larger blockchain in order to better support more data.

The team has continuously worked on stability and performance improvements with a target of hitting 13,000 TPS in 2019.

As GoChain's success largely revolves around its ability to drive adoption to its platform, the project has been very active in closing key commercial and strategic partnerships. This progress includes:

The GoChain team will not receive any tokens from projects that choose to conduct an ICO using the GoChain platform. However, team members are free to become advisors on projects as they see fit, as long as they are transparent and the roles do not conflict directly with GoChain.

GoChain has a total of 20 Github repositories, all of which are public. In aggregate, the GoChain team has made significant technical progress as highlighted within each of these repositories.

Similar to ETH, users of the GoChain platform must pay transaction fees (or "gas") in GO tokens to perform transactions on the blockchain. Authorized signers will create, sign, and distribute blocks to other nodes and earn GO tokens. The rate of rewards will be 4.4% of total tokens (44MM) in year 1 and will decrease over time. The amount awarded per block will depend on the finalized block times. Block times are 5 seconds so each node is rewarded 7 tokens per signed block in the first year. There will also be small transaction fees that the authoritative node will keep for signing the block containing the transactions.

GoChain claims that current gas fees are already 7,500x cheaper than ETH's, and will remain low until capacity is maxed out. 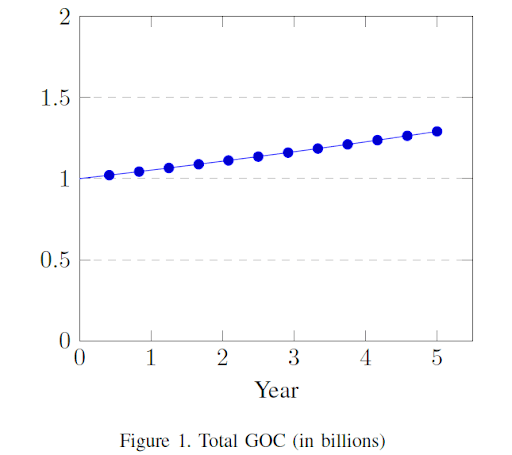 GoChain has implemented a two-phase voting process. For the initial rollout, the GoChain Foundation will add the first 50 signers to the authorization list. This will help ensure forced decentralization and avoid interference by any single government. Once 50 authorized signers have been established then voting control will be handed over to the signers to govern themselves. The PoA implementation repurposes several block headers to pass voting information between nodes.

Initially, 50 reputable companies from different industries and countries will be chosen by the GoChain Foundation to be the authorized signers. This aligns with the PoR consensus model where a participant must have a reputation that is important enough that they would face dire consequences if they were to cheat the system–in both brand and financial terms. Most businesses would face serious consequences if they were caught cheating a financial network. Larger companies with well known, strong brands will be chosen over smaller companies with less to lose in the event of a malicious act.

GoChain will look at a variety of factors for onboarding new nodes:

GoChain will then compare the potential candidate to the existing nodes as a relative comparison. As the reputation of nodes on the network increases, the threshold for becoming a new node will continue to increase as well.

Companies which operate authorized signer nodes will go through a verification process to ensure that their identity is correct. These validation steps will be automated through the use of smart contracts on the blockchain. The Proof of Authority ("PoA") implementation provides a point-in-time signer and voting state to provide full transparency to end users. Combined with the verification data stored within smart contracts, users can see what companies are running nodes. More detailed information on the verification process can be found in the GoChain whitepaper.

As of October 2018, GoChain has onboarded only 11 out of the 50 targeted authorized signers. Below is a list of the current companies signing blocks:

GoChain ran a live load test in March 2018 and achieved an average transaction speed of ~1,354 TPS with 3 live nodes. Stats can be found here.

GoChain's primary strategy to grow its community is to drive adoption through dApps that are built on GoChain. Current community activity is globally distributed, with a concentration in Asia and Europe.