Fantom (or the "Project") is building a platform consisting of a fast, scaleable, and secure DAG-based distributed ledger using aBFT principles to achieve consensus, and a new verifiable compiler and register-based virtual machine for smart contract execution.

Key Features of the Fantom Network

The vision of FANTOM is to grant compatibility between all transaction bodies around the world using DAG technology, and to create new infrastructure with high reliability that allows for real-time transactions and data sharing. The Project also aims to develop a new verifiable compiler and register-based virtual machine, which automatically checks for correctness, generates proofs of smart contract behavior, and execute instructions more efficiently than existing models.

As of May 2019, Fantom has used approximately 28.2% of TGE funds according to the allocations below:

Fantom holds its cryptocurrency funds in a number of single-signature wallets held by different persons within the organization, whose identity the team chose not to disclose for security reasons. Fantom's fiat currencies are held in a bank account that requires the approval of two of three individuals within Fantom for payments to go out. The payment of cryptocurrency funds also requires the approval of two of three individuals, and transaction records are shared with all three individuals to provide a complete audit trail of all funds spent.

The following chart represents the number and breakdown of all FTM tokens that are to be released into circulation on a monthly basis.

The native token is envisioned to have the following functionalities:

The most recent balances of ERC-20 and BEP2 FTM tokens can be found here:

Some developers' Github profiles are not available, as most of their work is done via Sfxdx's Github account.

The FTM token is currently listed on 10 exchanges, according to CoinMarketCap. Core crypto trading pairs include FTM/BTC, FTM/USDT, and FTM/ETH.

Fantom has 53 public and 71 private repositories. The team has mostly been using its public Github repositories.

Backend api for the Fantom network

Api for merchants to ineract with the Fantom pay application

Implementation of pairing-based cryptography in golang

A detailed description on how the native token will be used on the network is available here.

Planed use cases include the following:

Currently, Fantom has a wallet available on iOS and Android connected to an earlier version of Fantom's distributed ledger. It allows a user to transfer testnet tokens between accounts, with sub-second confirmations. 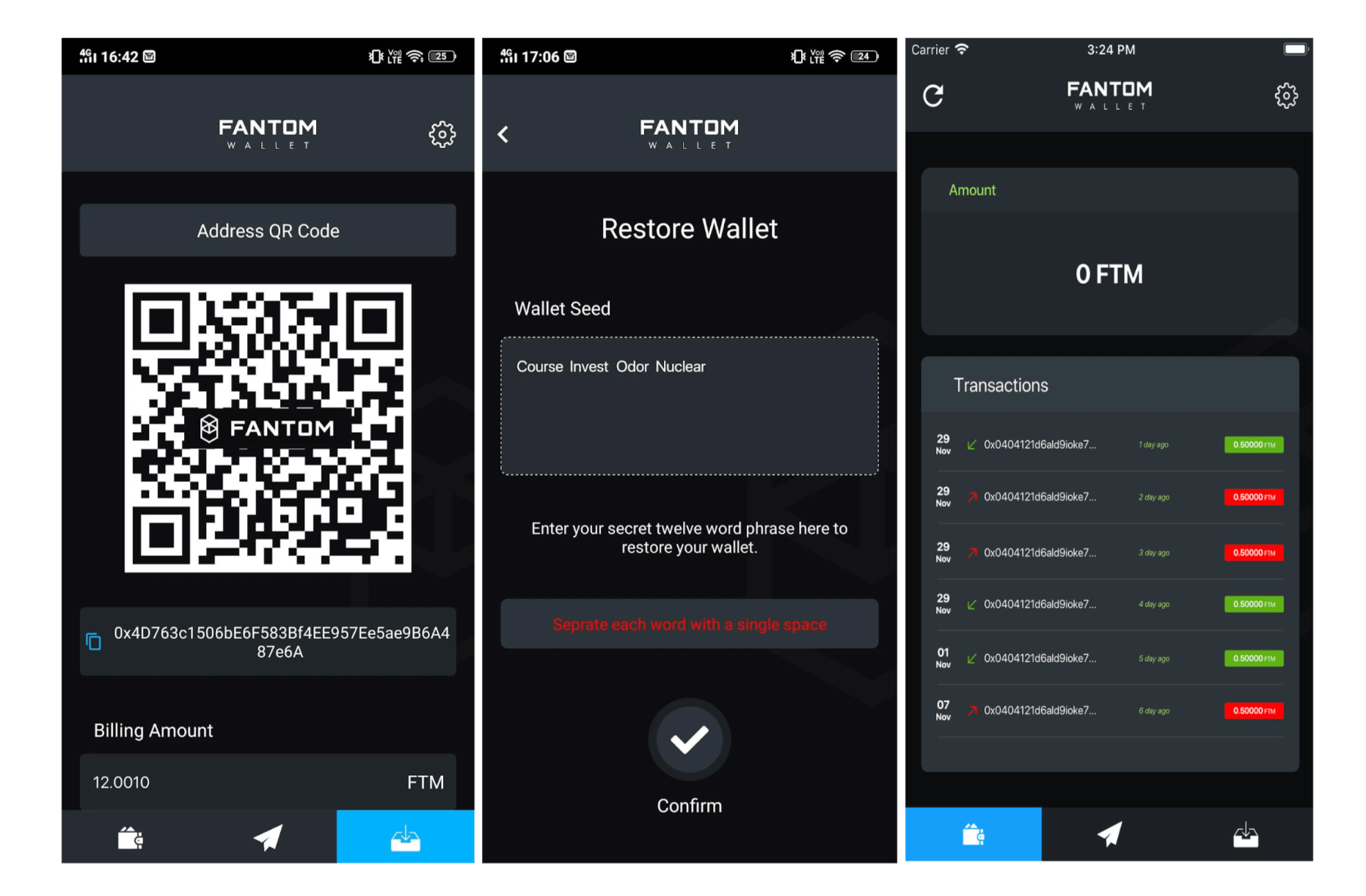 Fantom has developed a general framework named Lachesis for DAG-based consensus to build scalable distributed systems. The Fantom team has also developed a new consensus protocol ONLAY based on the Lachesis framework. ONLAY guarantees practical Byzantine fault tolerance in the presence of up to one-third of the participants that are compromised. The key challenge Fantom aims to address is a fast consensus and reliable ordering for events.

For the ONLAY Protocol, the Fantom team states that its initial experiments have shown that leveraging the assigned layers of event blocks can help achieve more deterministic ordering of blocks and that the new layer-based protocol is a promising alternative to achieve deterministic, resilient distributed ledgers.

The following are some steps for a transaction to reach finality in the Fantom network:

Mainchain and Atropos of Lachesis DAG

Thus, there will be a total of five confirmations to be sent and the fifth receipt is the final confirmation of a successful transaction.

The team notes there are some cases that a submitted transaction can fail to reach finality. Examples include a transaction does not pass the validation, e.g. insufficient account balance, or violation of account rules. The other kind of failure is when the integrity of a DAG structure and event blocks is not complied due to the existence of compromised or faulty nodes. In such unsuccessful cases, the event blocks are marked for removal and detected issues are notified to all nodes. Receipts of the failure will be sent to the client.

The Fantom network consists of nodes that are distinguished into users and validators. The ONLAY framework introduces graph layering on the DAG to achieve reliable ordering of event blocks.

ONLAY framework leverages the assigned layers of event blocks in order to achieve consensus of final ordering of event blocks and transactions across distributed systems. Each node maintains its own DAG and computes the main chain of finality event blocks. The consensus protocol achieves optimized pBFT with deterministic DAG-based finality on valid transactions and honest nodes. Once a block is finalized in ONLAY, it is final without further need of several block confirmations like in the probabilistic finality in Nakamoto consensus (in BTC, ETH).

There are three blockchains in the Fantom architecture: the Node Service ("NS") blockchain, the OPERA chain, and the Mainchain ("MC") blockchain. The NS blockchain stores the node identifiers of the network. The OPERA is the directed acyclic graph consisting of event blocks. The MC blockchain is the main chain, which stores the event blocks that are validated and finalized by the network.

For the three blockchains listed above:

Key features of the new programming language toolchain include:

Fantom is planning to implement Proof of Stake to secure the network. It will be permissionless, allowing anyone to participate in it by running or delegating to a validating node.

Nodes that participate to achieve consensus are called "validator nodes". A user can run a validating node by staking a minimum of 3,175,000 native FTM tokens. A user can also delegate to a validating node any amount of FTM, and the account running the validator account will receive a fixed 15% fee from all rewards generated by the delegator's tokens. 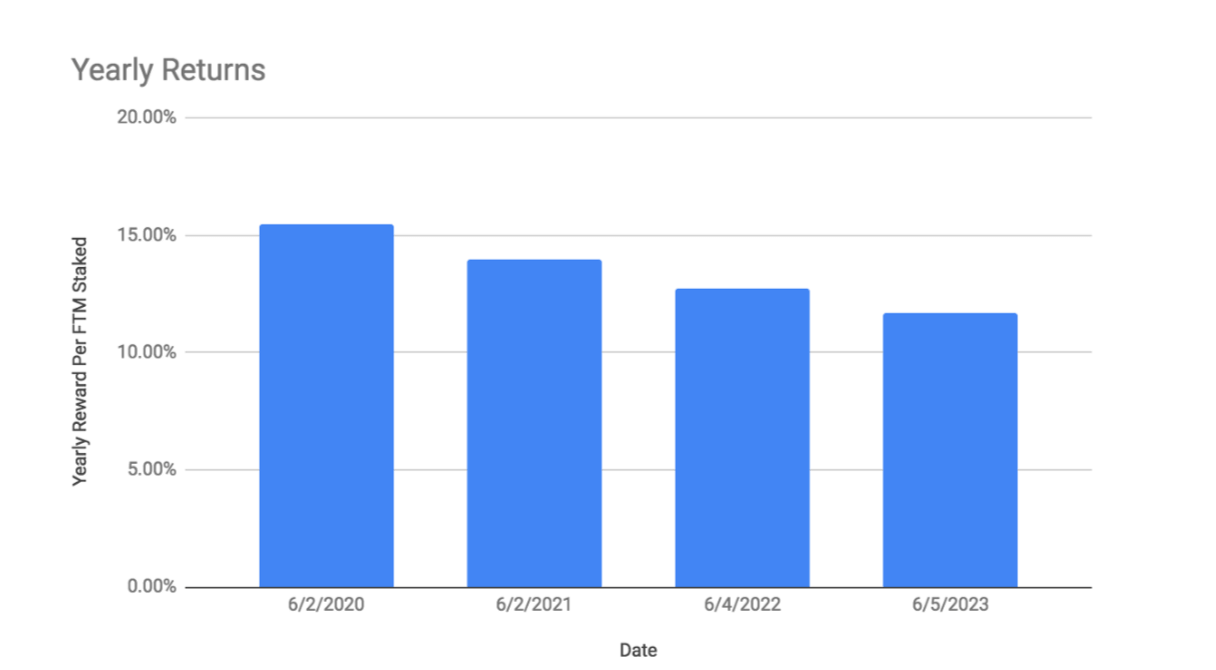 Validator rewards are also influenced by a Proof of Importance score. This score is a multi-factor model that influences the rewards earned by validators. A validator earns rewards not simply based on the number of native FTM that is staked, but also by a number of other factors including:

2. Originating transactions: Validators will be expected to accept new transactions being submitted to the network and act as originators of such transactions. Those who consistently do not originate transactions will be penalized, receive fewer block rewards, and will ultimately be pruned from the network.

Nodes that do not participate in consensus are called "non-validating", or "listening" nodes. These nodes are able to synchronize with the network, submit, and receive transactions. However, they do not contribute to any voting rounds to confirm transactions. Because they do not participate in consensus, running a non-validating node does not earn any rewards.

The Fantom team lists the following as its current and future community strategies: