A Blockchain Gaming Platform To Play, Socialize, And Stake.July 22th 2019
Share this article

WINk aims to build on its market position as a leading blockchain gaming platform through the consistent introduction of high-quality decentralized applications (DApps). This will be accomplished by leveraging the WINk team's experience for game / ecosystem design and by enabling other development teams and users to guide the growth and direction of the platform through a unique governance mechanism.

As users retain custody of their funds and developers can deploy transparent DApps, WINk's team core focus is on the user. Innovations, such as the exclusive WIN token and "play-to-mine" modes, attempt to ingratiate VIP users, creating a platform with a loyal and committed fanbase.

WIN token is a TRC-20 utility token built on the TRON blockchain. Within the WINk platform, WIN is the token used to incentivize an active participation from key stakeholders i.e., developers and users.

The following is a non-exhaustive list of the token's core use-cases:

As an early entrant to the trustless & permissionless gaming space, WINk (TRONbet) is currently amongst the highest ranked applications in terms of users, transaction count, and transaction volume, as reported by DApp tracking platforms like Dapp.Review.

WINk's daily volume typically averages around $10million USD with over 4,000 daily active users. WINk also boasts strong retention data that will continue to improve as the user-onboarding is further improved. 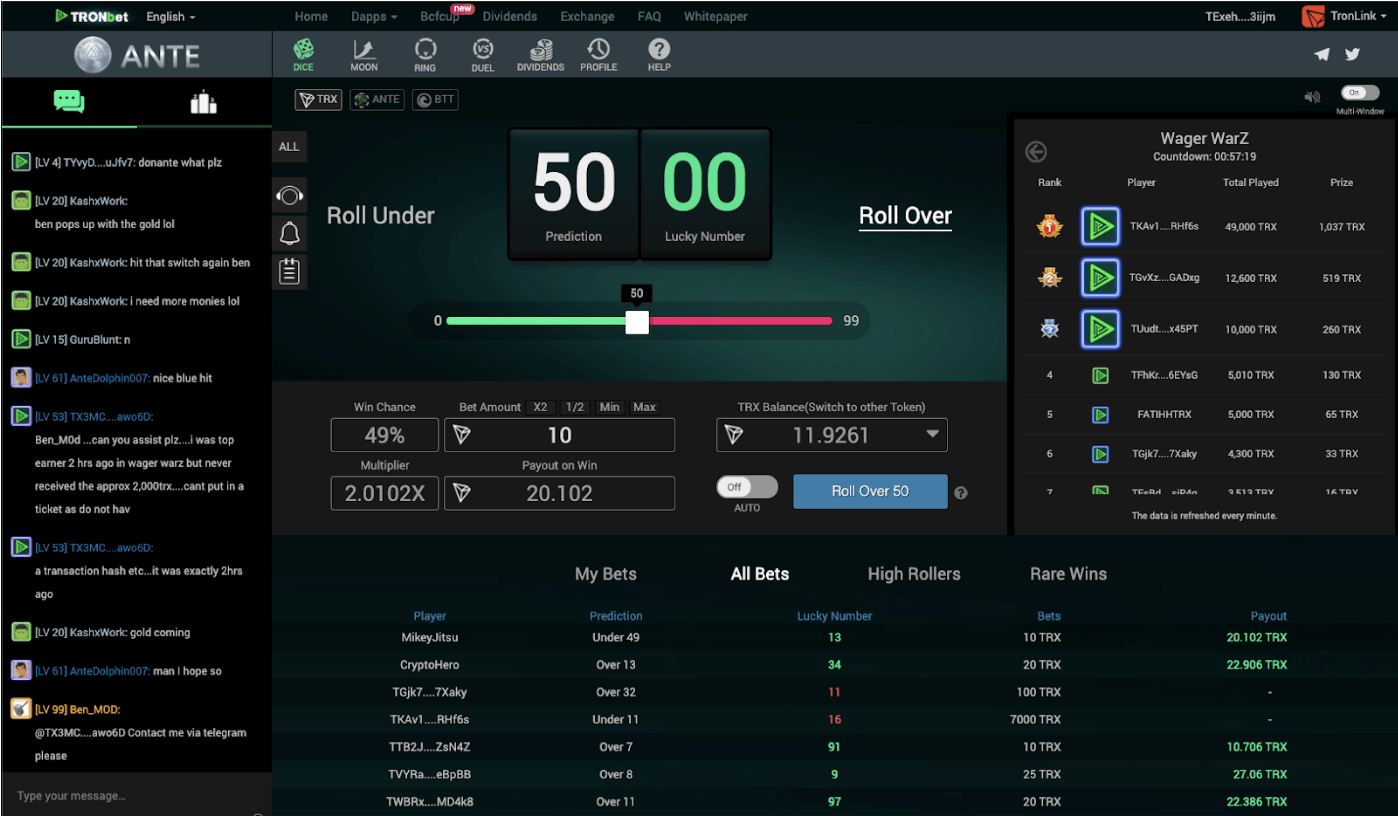 Dice was the flagship game when the platform first launched in late 2018. Players choose a number and predict whether they will roll over or under. 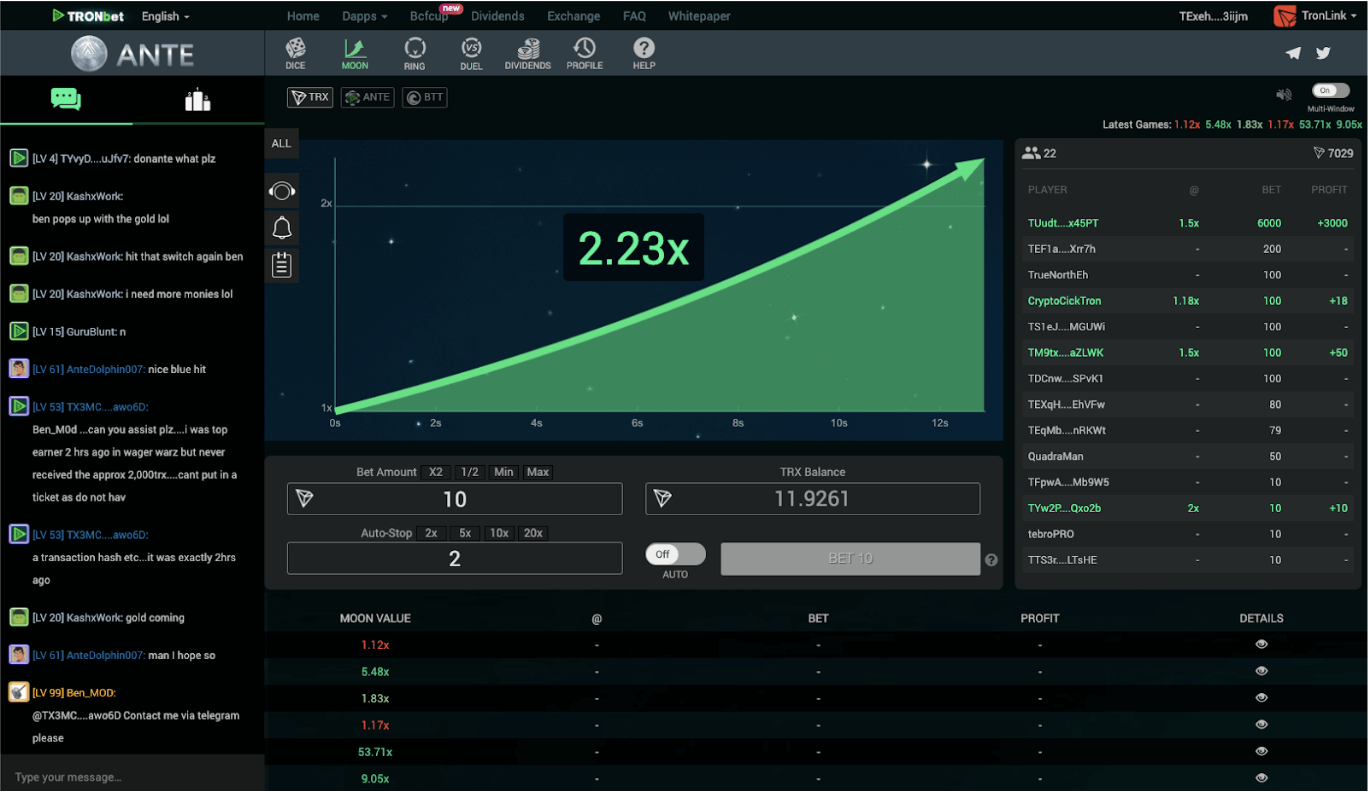 Moon is a game where players are paid based on a multiplier that starts from 1x and can reach highs of over 250x. The multiplier increases steadily, but can crash to zero at any point. Players can cash out at any point in time and receive the multiplier value. 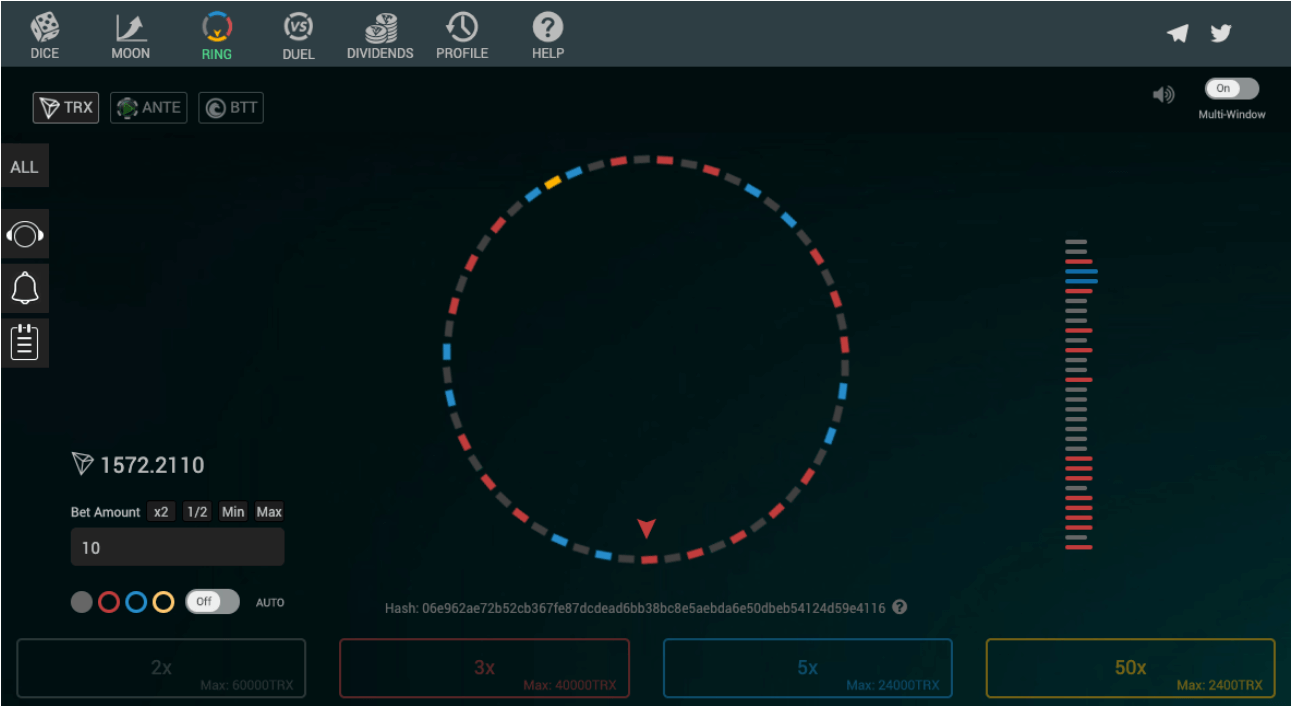 Ring & Duel is a simple and engaging game where players choose which color they predict the wheel will land on - grey rewards 2x the wager, red 3x, blue 5x and gold 50x. 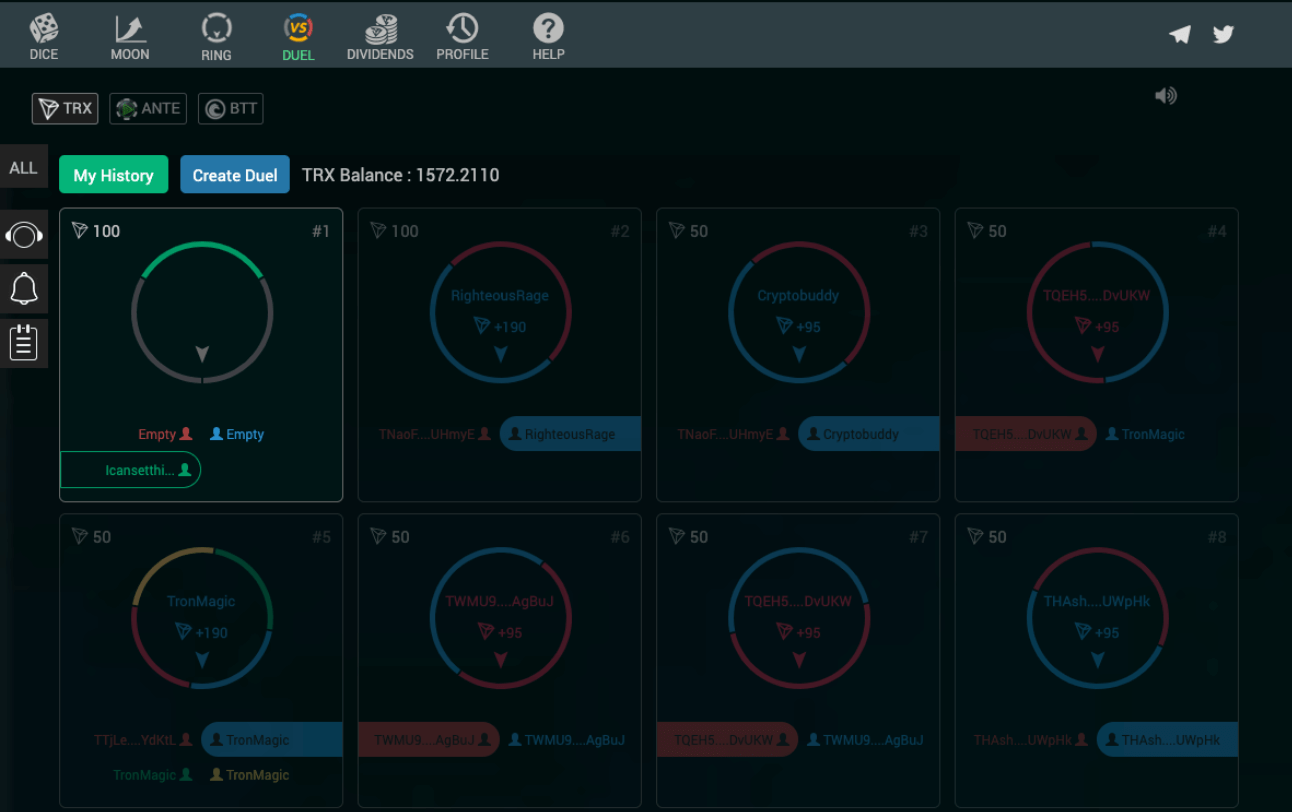 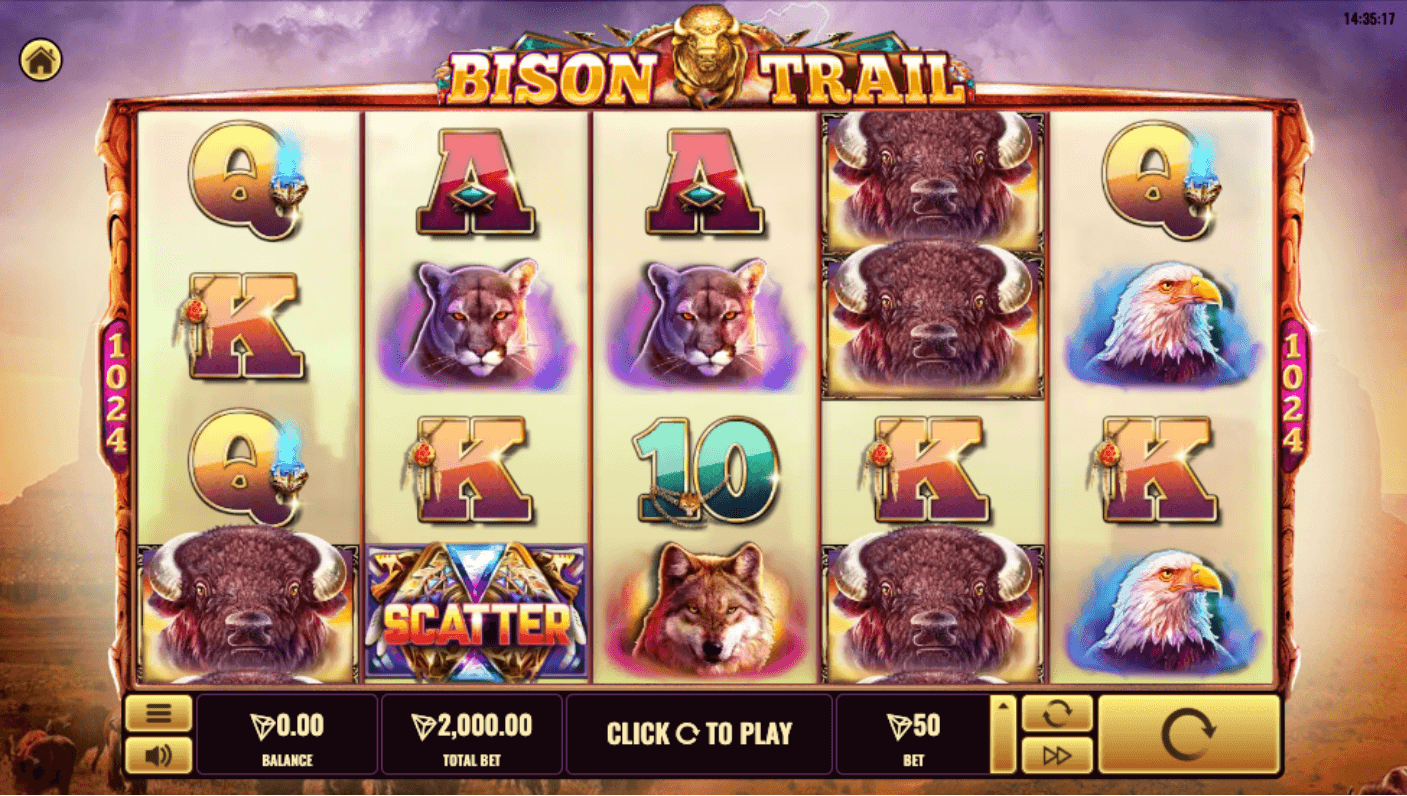 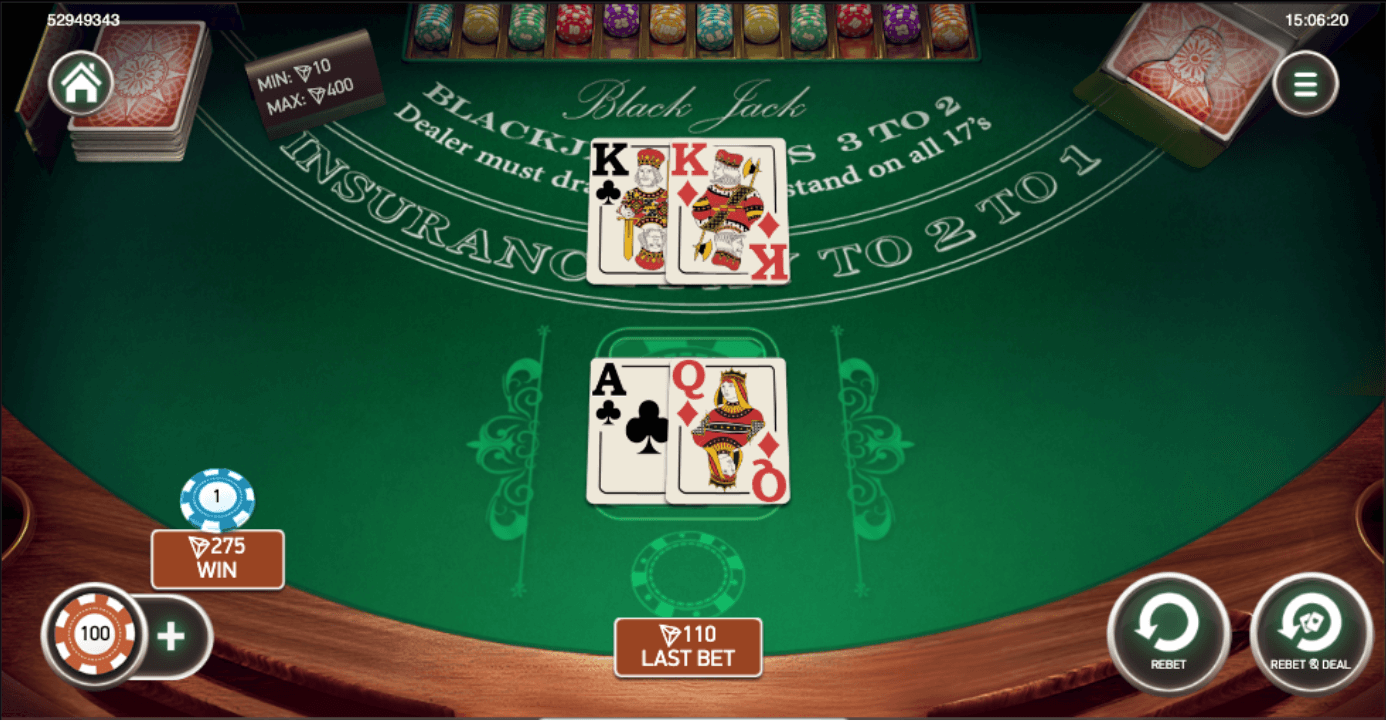 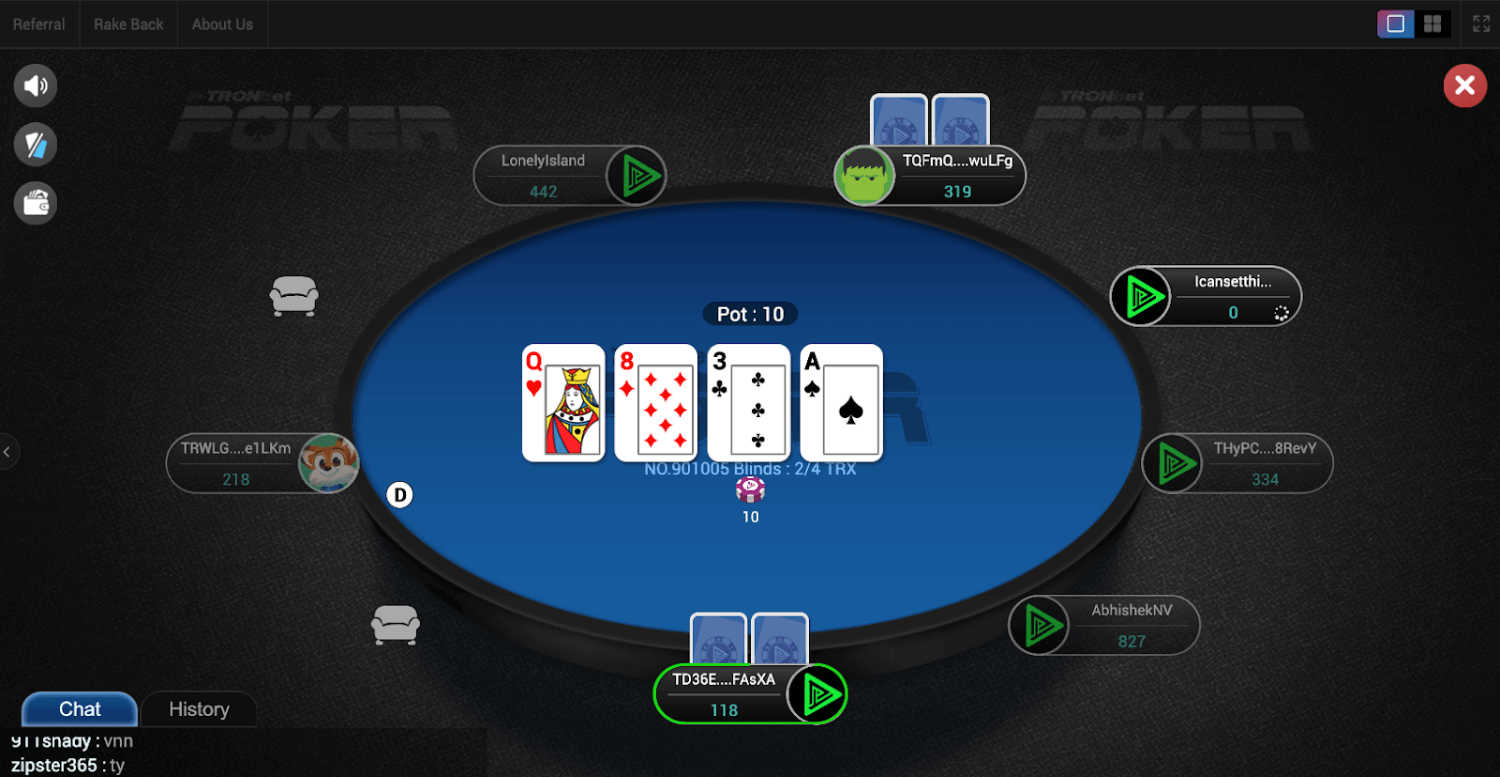 WINk has created an online poker product that combines the benefits of transparent blockchain technology with a seamless user experience.

As of July 18th 2019, the WINk team has not used any of the funds that had been raised. However, projected 18 month cash burn is approximately $5MM and any funds raised will be spent according to the following allocations:

According to the team, funds are being held a multi-signature cold wallet.

The following chart represents the number all WIN tokens, along with its breakdown, that are intended to be released into circulation every month.

WINk boasts one of the largest communities in the blockchain space, with members actively engaged across multiple social channels. Social elements of WINk's platform have mobilized the gaming community and contributed to repeated engagement and minimal churn.

For instance, WINk has multiple user acquisition channels given it is deeply embedded within the Tron and Bittorrent communities. With the acquisition of BitTorrent and its 100m MAU user base, Tron currently forms the one of the largest decentralized networks in the world. For instance, the introduction of this pool of users to WINk would provide new opportunities to experiment with digital assets and continue to generate widespread adoption of the ecosystem.

WINk will introduce the WinDrop reward distribution mechanism to the community as one of the first community growth strategies. The WinDrop will take place everyday and incentivize ecosystem participants with TRX. The amount of TRX distributed to each user will be proportional to the amount of Win Power they have accrued from staking WIN.

WinDrop will also help third-party dApp tokens capture long-term value by giving players of these projects access to a larger rewards pool. Whether it is an indie project bootstrapping their DApp or a AAA game studio building a blockchain game for the first time, game developers can avoid the complexity of building their own token economy by participating in WinDrop. More details about the WinDrop system will be released in the future.

WIN token airdrops act as an additional incentive to attract users and developers to the platform. WINk intends to distribute WIN to holders of TRX, BTT, and many other TRC-based tokens to incentivize their participation. Airdrops will have no unnecessary friction - if users are holding the specified token, they will be eligible for WIN airdrops. All official wallets relaying on TRON's network and carrying the specified tokens will be eligible for WIN airdrops corresponding to the amount they are holding.

The platform will be hosting several tournaments to engage the WINk community and TRON fans in general. For instance, the team has recently hosted the very first Charity Poker Cup together with members from Binance, TRON, and Litecoin. This event brought together Binance CEO Changpeng Zhao, TRON Founder Justin Sun, Litecoin Founder Charlie Lee, and other leaders from industries including professional basketball, eSports, and other entertainment areas.

The WINk team will be working closely with TRON to leverage all the opportunities TRON's growing ecosystem has to offer. The WIN token will build on top of ANTE's existing demand and liquidity by bringing in stakeholders from TRON, BitTorrent, and other communities across the blockchain. TRON's strong relationships with industry leaders, including top cryptocurrency exchanges, will likely facilitate WIN's further adoption.

Going forward, TRON will continue adding utility to the network with WINk being one of the earliest adopters.