An Efficient Blockchain Powered By Proof-Of-Stake Voting.August 23th 2019 (updated on May 21st 2020)
Share this article

TomoChain is an EVM-compatible public blockchain that aims to achieve high-transaction speeds without compromising decentralization. TomoChain does this by utilizing a consensus method called Proof of Stake Voting (PoSV), which incentivizes token-holders to play an active part in staking across a network of 150 masternodes, and to monitor their performance and governance actively.

TomoChain's vision is to become the "infrastructure of choice for the next generation of global open finance". To do so, the team aims to become a strong contender in the race to attract further financial innovations in the crypto-finance industry.

With its PoSV consensus mechanism, TomoChain provides a fast and cheap way to build financial DApps and to issue tokens, while keeping the network decentralized and secure.

TOMO is the native asset of TomoChain and is also the reserve cryptocurrency for all third-party dApps running on TomoChain. Being the protocol asset for the TomoChain infrastructure, TOMOs are needed by all parties utilizing TomoChain to build dApps or issue and integrate cryptographic tokens into their dApps.

In addition to the above, TOMO tokens are being used as:

Some of its decentralized applications (dApps) include:

In addition, other products include:

2.1 A network of masternodes with a unique reward mechanism

The TomoChain blockchain is produced and maintained by a maximum of 150 masternodes in a consistent manner through the PoSV consensus mechanism. Masternodes store the entire blockchain state, propose blocks, and are required to lock up at least 50,000 TOMO tokens. Masternodes are selected by voting, which is done through the TomoMaster dApp.

Since the block rewards in the Tomochain network are evenly distributed for each block regardless of the amount of stake a masternode might have, for every 900 blocks, a checkpoint block is created and contains no transactions: instead it only features rewards. To claim these rewards, each masternode has to scan all of the created blocks in this 900 blocks and count the number of signatures. The higher number of signatures one masternode has made, the more reward it earns out of this reward block.

Rewards in each block are distributed in the following manner:

TomoChain aims to use this Double Validation technique to enhance the stability of the blockchain by diminishing the probability of producing "garbage" blocks while maintaining both the system's security and consistency.

The below graph is a high-level demonstration of the TomoChain network. 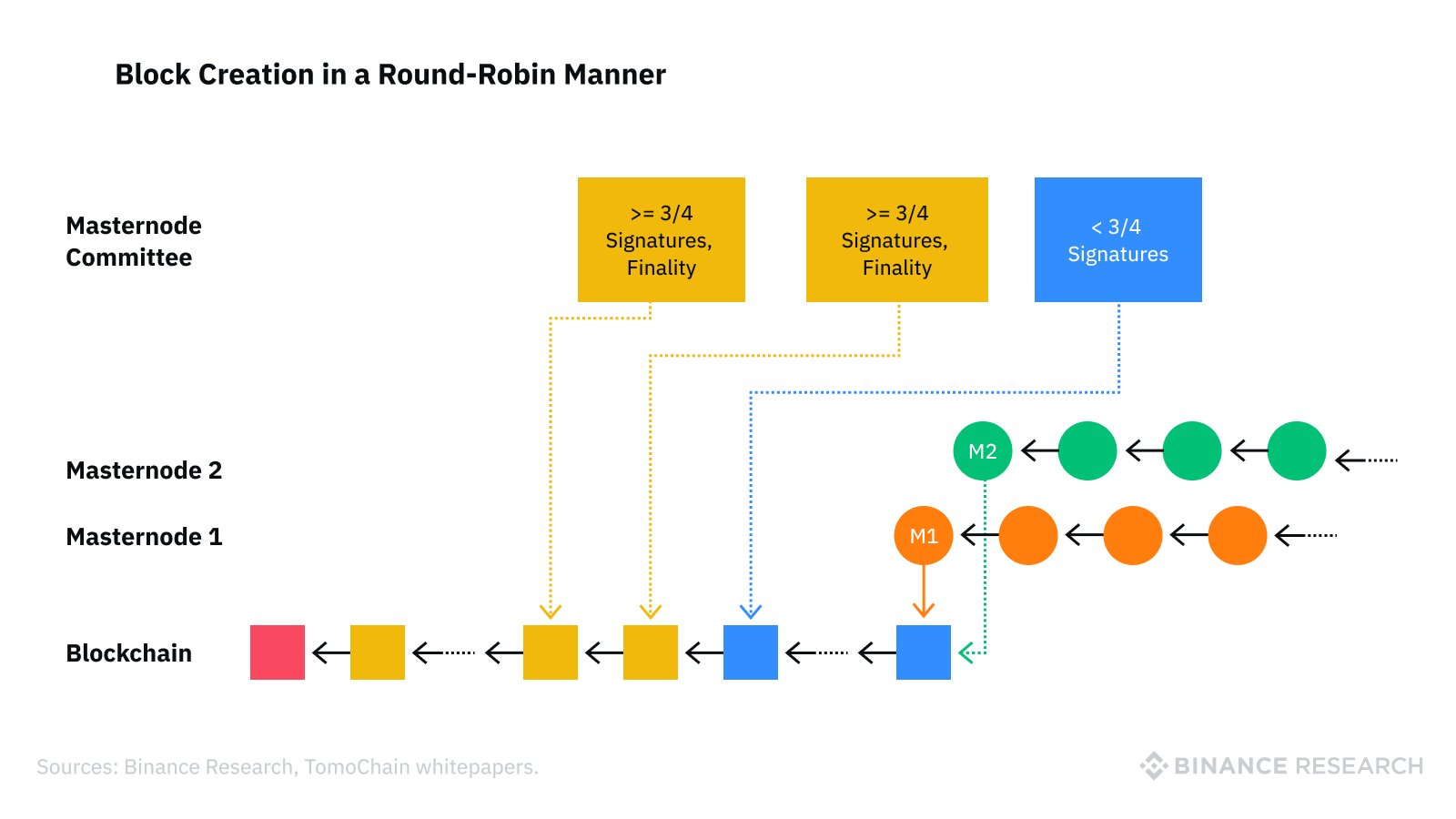 TomoZ is a protocol to issue tokens based on the TRC-21 standard.

While users pay transaction fees with the same token, it is still converted to its TOMO equivalent to power the network. 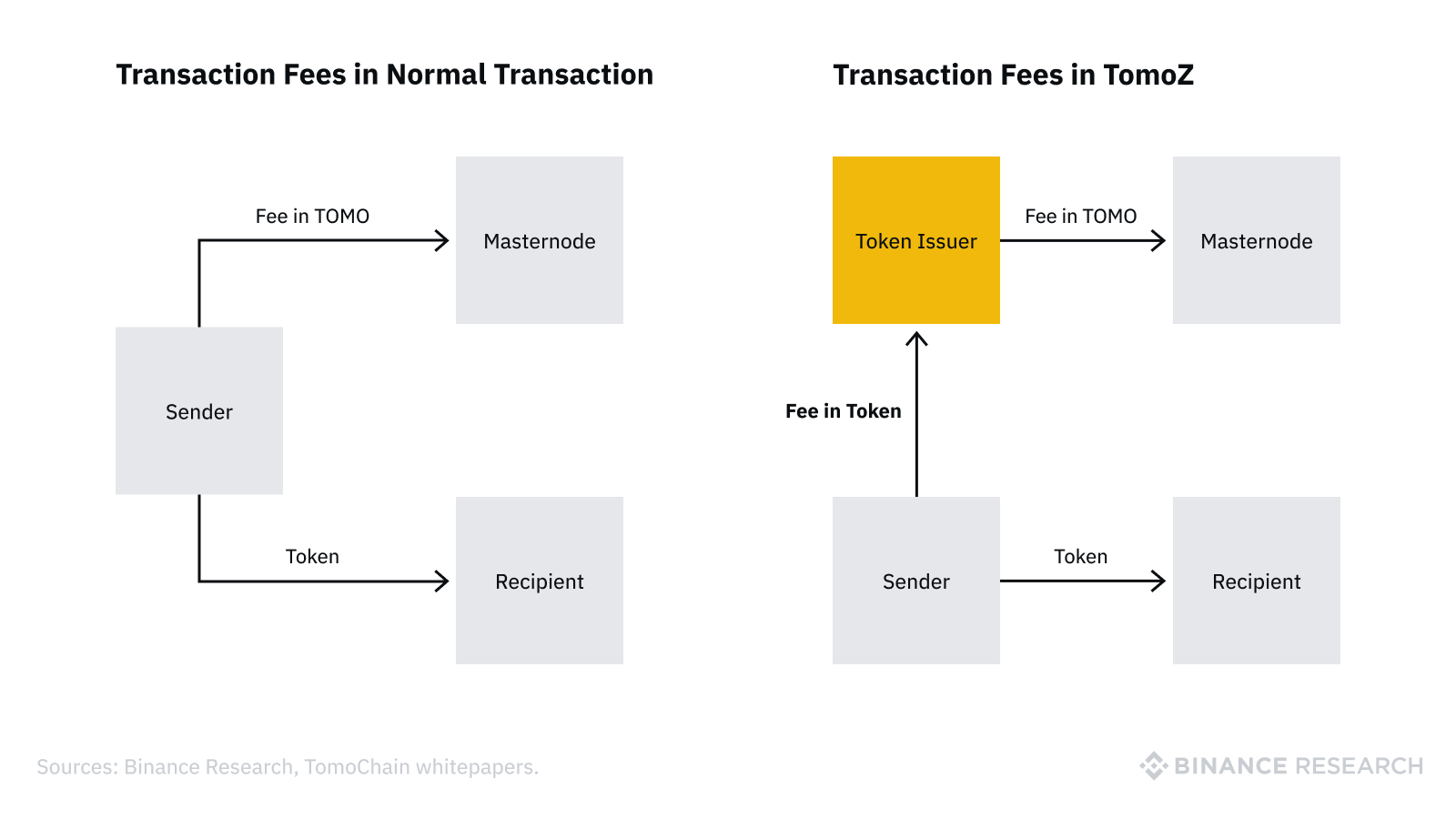 For more details on the underlying logic, please click here.

TomoP is a protocol enabling private transactions on the TomoChain public blockchain. It allows the creation of anonymous transactions that hide all related information on value, sender, and receiver's addresses to preserve the financial privacy of TOMO and various tokens holders on TomoChain.

TomoP supports both an anonymous TOMO transfer method and a private token standard on TomoChain. At its core, TomoP relies on Ring CT, bulletproofs, and Pedersen commitments. 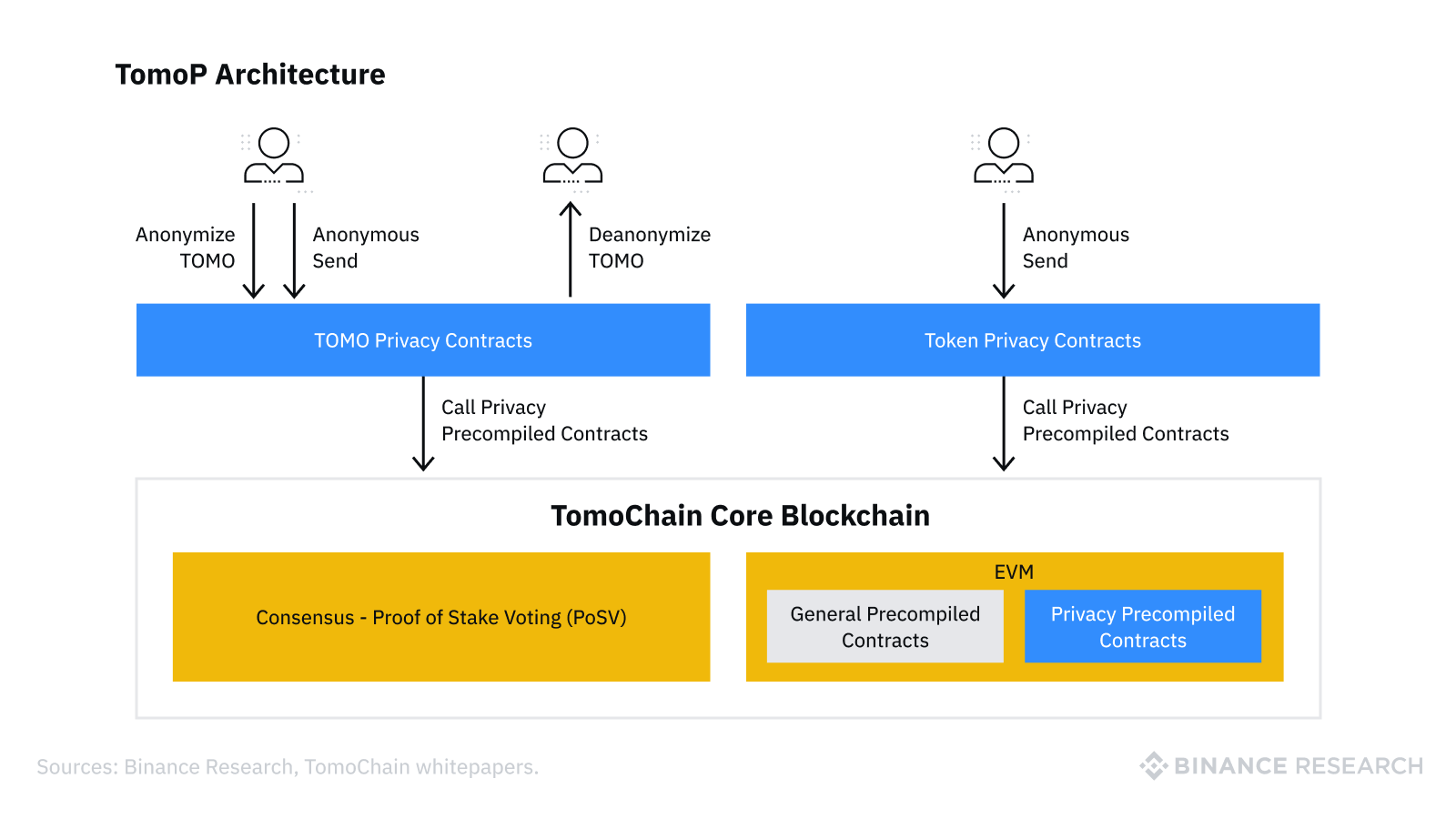 For the full detail of the implementation, please click here.

TomoX is a permissionless decentralized exchange (DEX) protocol that empowers a diverse system of DEXs, market-maker providers, and independent projects to work together in a decentralized manner.

It allows individuals to launch a full DEX without extensive technical knowledge and with minimal development upkeep costs. However, anyone can propose a DEX by depositing 25,000 TOMO on the TomoRelayer portal.

As of now, TomoX supports TomoChain standards, including TRC-21 and TOMO native token. In the future, TomoX is expected to support other native tokens and major cryptoassets through TomoBridge like BTC, and ETH, with more standards expected to be gradually integrated into TomoX. 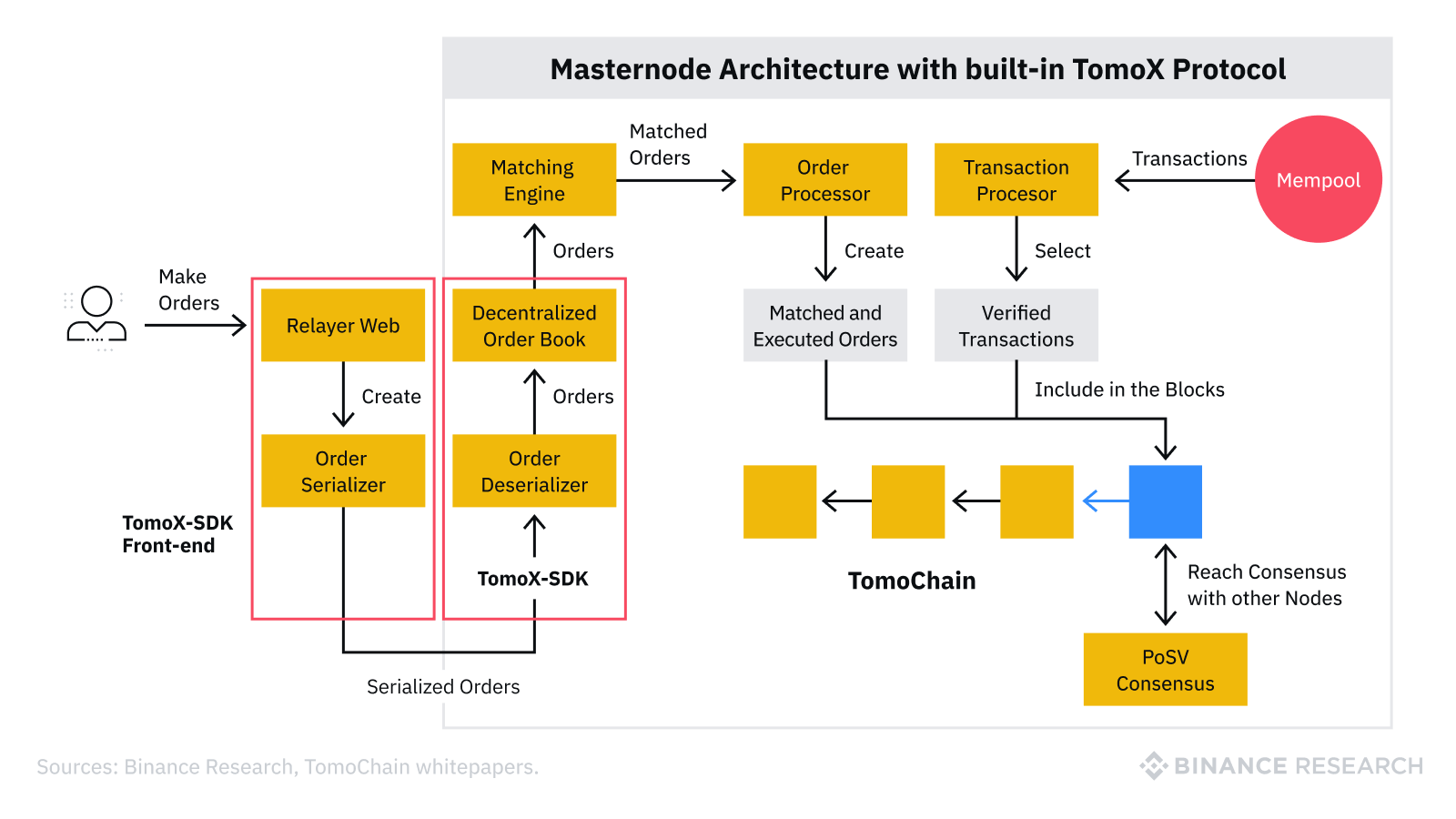 For more details about TomoX, please refer to the whitepaper.

As of August 2019, TomoChain has used approximately 50% of TGE funds according to the allocations below:

TomoChain holds most of its funds in multi-signature wallets. Unlocking funds would require the approval of 2 high-level managers.

The following chart represents the number and breakdown of all TOMO tokens that are to be released into circulation on a monthly basis.

Real-time updates of work in progress can be found here.

For developers, the TomoChain team focuses on growing the community by actively reaching out and educating developers about the benefits of the platform. TomoChain incentivizes developers to build dApps on its blockchain through a wide range of initiatives, including hackathons, developer meetups, online/offline developer training courses, creating a developer portal with detailed documentation and tools, partnerships with top tech universities, etc.

For non-technical users, the team frequently connects with the community through daily announcements of news and events, weekly updates, monthly updates, monthly AMA series, and offline meetups. The team also runs engagement activities such as games, challenges, and giveaways campaigns.

TomoChain's community has spread globally, with the US, Germany, Japan, and Vietnam being TomoChain's main userbases.