The Sandbox is a virtual world where players can build, own, and monetize their gaming experiences on the Ethereum blockchain using the platform’s utility token SAND.

Players can create digital assets in the form of Non-Fungible Tokens (NFTs), upload them to the marketplace, and integrate into games with Game Maker. 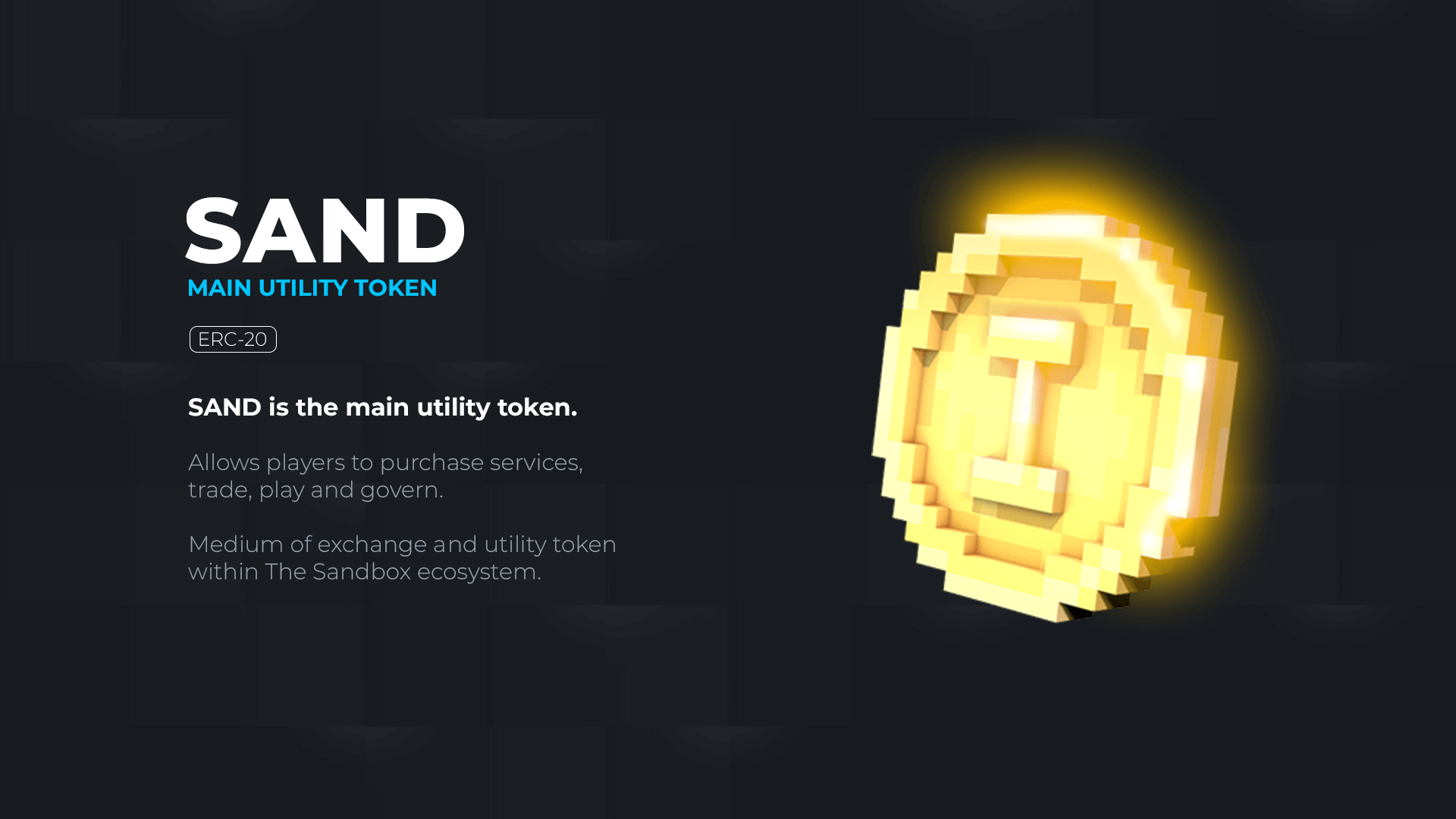 A LAND is a digital piece of real estate in The Sandbox metaverse that players can buy to build experiences on top of. Once player owns a piece of LAND, the player will be able to populate it with games and ASSETS. Multiple LANDs can be combined to form an ESTATE.

A total of 166,464 LANDs will ever be available, contained in a map that will form The Sandbox metaverse.

GEM and CATALYST defines the tier, scarcity, and attributes of ASSET. CATALYST adds empty sockets to the NFTs that can be filled with GEMs. The higher the quality of the CATALYST, the more sockets your ASSET will have.

Users can monetize their time on the platform, keeping 95% of SAND as revenue share, by:

Through the use of ERC-1776, The Sandbox allows platform users to initate transactions on the Ethereum blockchain while transaction gas fees are paid by the platform, optimizing overall user experience.

The Sandbox platform utilizes a fee capture model, where 5% of all transacted value is being collected from marketplace transaction fees. The other 95% of all transacted value is collected from LAND sales, premium NFT sales, and subscription services. A total of 26.50% of all SAND transaction volume goes back into the Foundation. It is calculated as: 5% x 50% + 95% x 25% = 26.50% 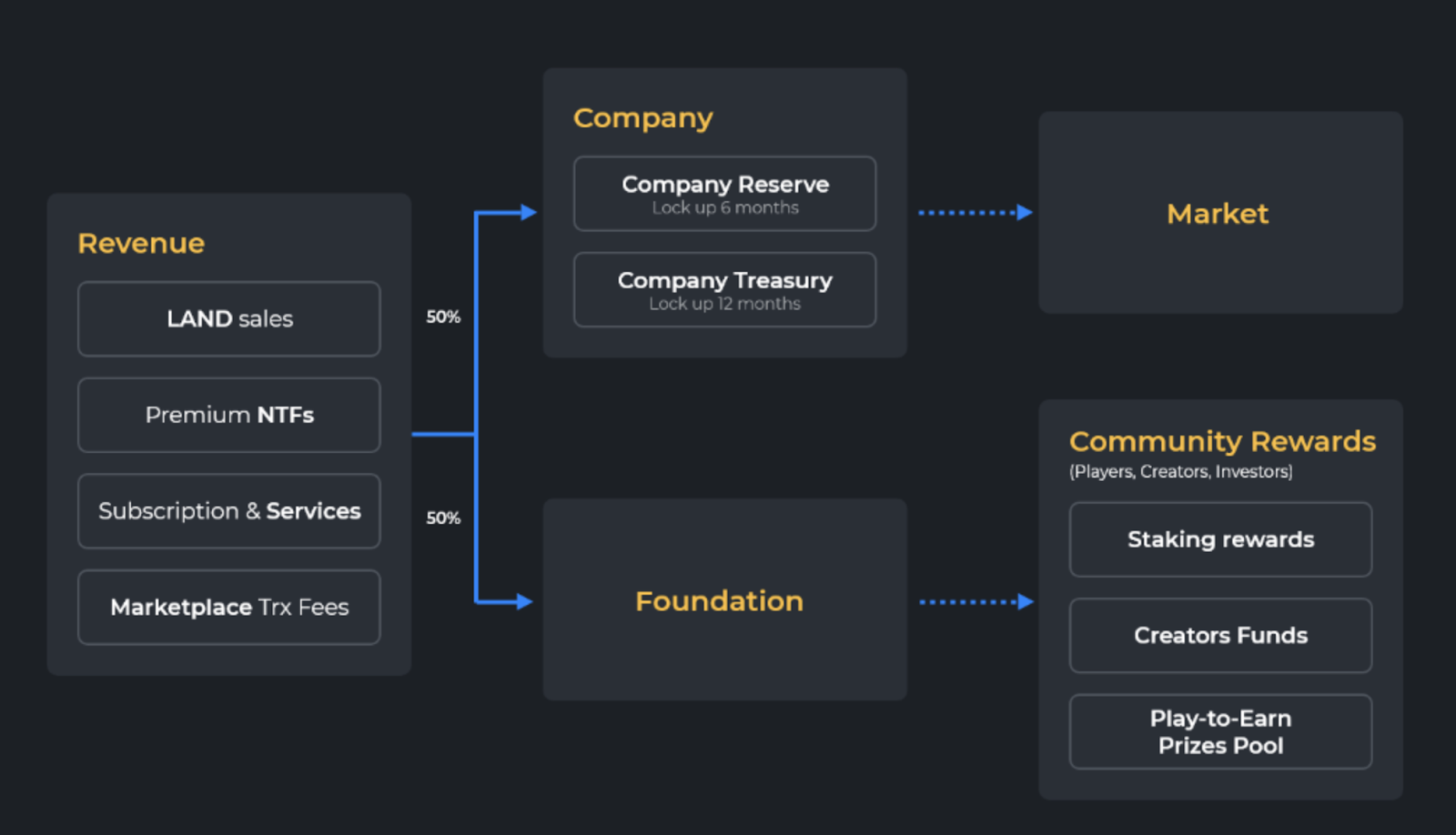 The Foundation supports the ecosystem of The Sandbox, offering grants to incentivize high quality content and game production on the platform. As of the time of writing, the Foundation has funded over 15 game projects and granted 100 artists to produce NFTs.

The Sandbox platform consists of three integrated products that together provide a comprehensive experience for the production of User-Generated Content (UGC). The Sandbox further benefits users by allowing them to secure copyright ownership of UGC through the implementation of NFT standards.

VoxEdit is a 3D voxel modeling package that allows users to create and animate 3D objects such as people, animals, foliage, and tools. Voxels, which are the equivalent of square 3D pixels similar to building blocks, can be manipulated using VoxEdit to easily create ASSETS.

The Sandbox’s Marketplace allows users to upload, publish, and sell their ASSETS made in VoxEdit. ASSETS are first uploaded into an InterPlanetary File System (IPFS) network and then registered on the Ethereum blockchain to prove ownership. ASSETS can be sold by making a sale offer on the Marketplace.

The Sandbox's Game Maker allows players to build 3D games for free. With the help of visual scripting tools, no coding knowledge is required.

The Sandbox platform currently runs exclusively on Ethereum, which is used to record the ownership of tokens and allow owners to transfer, sell, or use them without restrictions. IPFS is used to store all related information of ASSETS, and ensures that this information cannot be changed without the permission from respective owners.

The ERC-20 standard is used for the SAND, GEM, and CATALYST tokens, while ERC-1155 and ERC-721 standards are used for the storage and trading of LAND and ASSETS.

An overview of the overall Sandbox architecture is shown below: 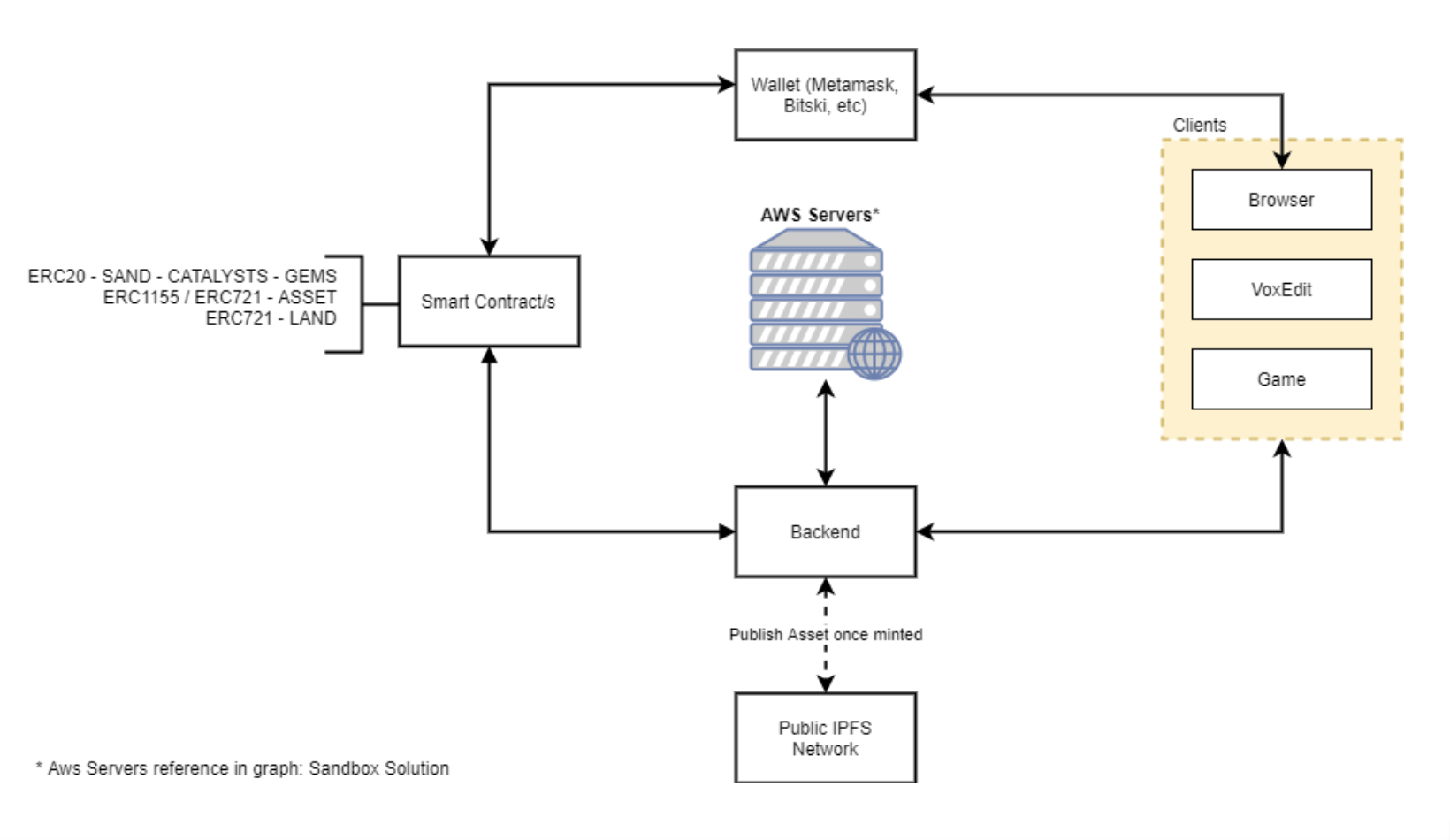 The Sandbox's game engine is built on top of Unity. By using Unity's Universal Render Pipeline (URP), The Sandbox will be able to support mobile platforms in the future, without sacrificing the quality of the game. The game engine also supports custom Voxel models, rigging, and animation formats (VXM, VXR, VXA) from VoxEdit.

As of writing, The Sandbox team has used approximately 65.00% of funds raised according to the allocations below:

The Sandbox team holds its funds in crypto, stablecoins, and fiat currencies. Funds are stored in crypto exchanges with 2FA authentication, and EUR bank accounts. Movement of funds requires the approval of at least 2 out of the 3 executives of The Sandbox.

The SAND token has the following use cases:

7. The Sandbox's activity and community overview

The Sandbox team currently focuses its community development strategy on the English and Korean speaking audience, and will add support for other languages as the project grows.

Current community growth strategies of The Sandbox include:

Future community growth strategies of The Sandbox include:

Community and social channels (data as of August 5th 2020)