The Nano blockchain offers fee-less and instantaneous transactions. Nano accomplishes this by using a network structure called Block Lattice, under which each account has its own blockchain to keep transactions. Since transactions are fee-less, in order to prevent spam attacks, an account is required to perform some Proof-of-Work tasks to send a transaction. Nano token holders delegate voting weight to elect network validators. The validators do not earn block rewards or transaction fees. Instead, they contribute voluntarily and enjoy the natural incentives provided by a secure and stable network.

Nano aims to revolutionize the world economy through an instant, fee-less and decentralized network that is open and accessible to everyone.

The lightweight nature of the Nano blockchain allows anyone to easily participate in local and global economies with a low barrier of entry.

Nano strives to provide an intuitive user experience by offering instantaneous and fee-less transactions. With a fully distributed supply, bridging opportunities such as foreign exchange transactions and fast cross-border transfers can be confidently facilitated over a decentralized network.

Nano utilizes Block Lattice as its network structure, which aims to allow faster transaction times than that of blockchains which require full network consensus for transactions. Another key difference between Nano and other blockchain networks is that the Nano validators do not collect transaction fees nor block rewards. The validators protect the network so the value of their NANO tokens will not fall.

Block Lattice is a data structure in which individual accounts control their own blockchain. Each account chain can only be updated by the account's owner; this allows each account chain to be updated immediately and asynchronously to the rest of the Block Lattice, resulting in quick transactions. Nano nodes only come to intervention when there is a conflict in transactions. 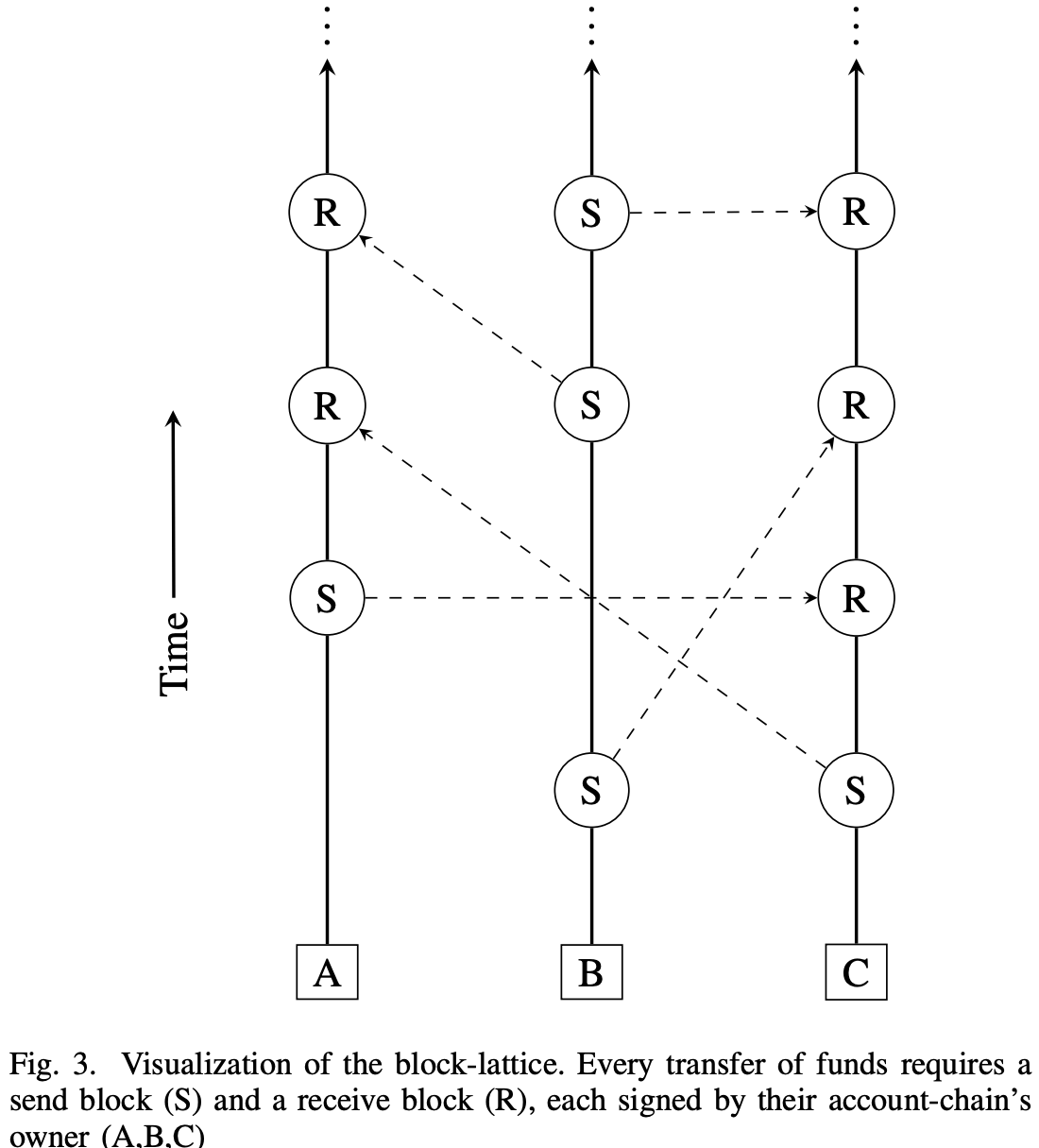 Once a block sending funds is confirmed by the network, the transaction goes into a pending state and cannot be reversed. The receiver can be offline and safely leave the funds in this state until they are ready to publish a matching block which receives the funds to their account. 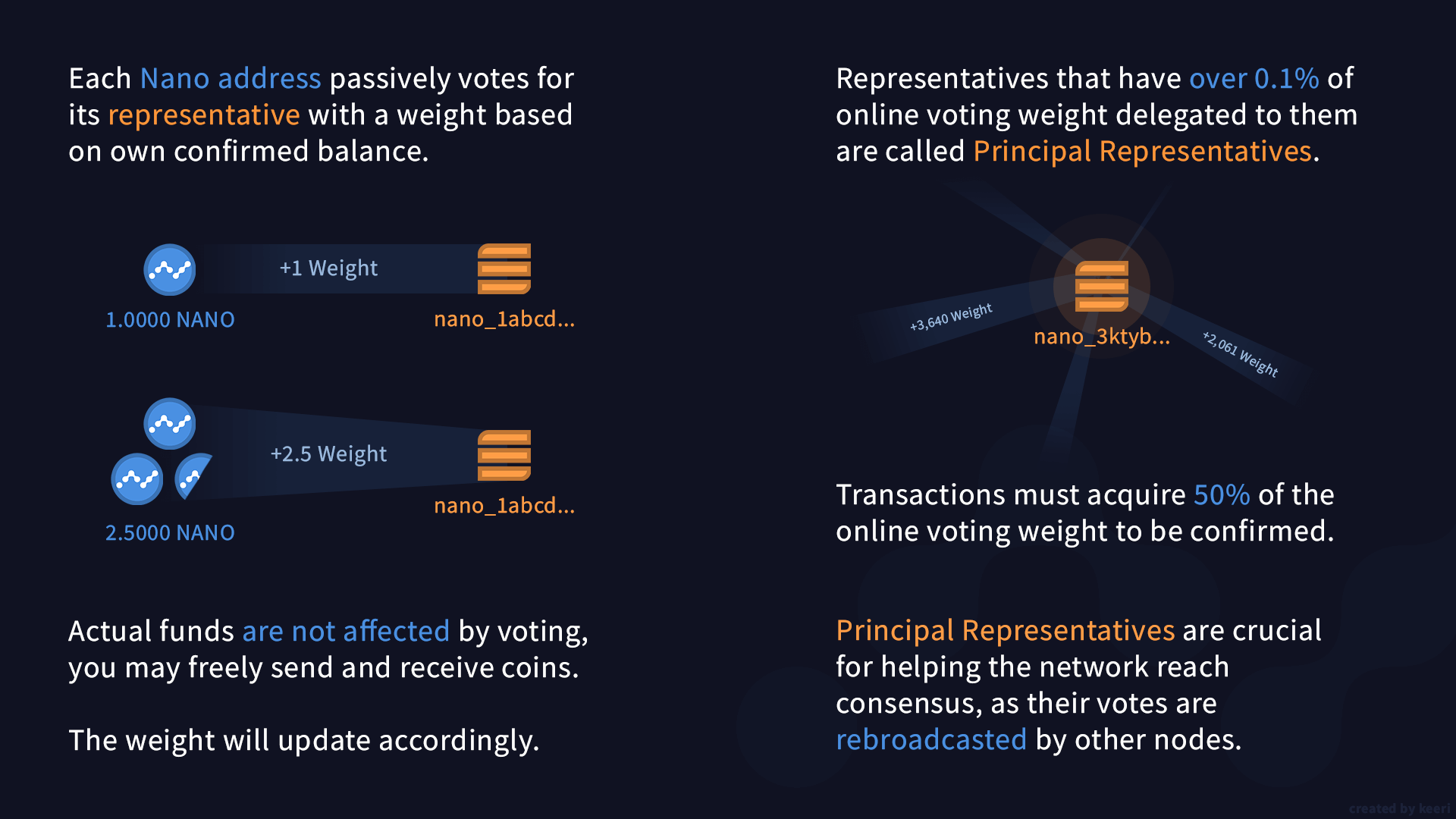 To initiate a transaction in the Nano network, a Proof of Work task must be performed by the sender.

In contrast to other blockchains which uses Proof of Work for network consensus, the Proof-of-Work tasks in Nano are only used *to prevent spam attacks. For instance, a malicious entity could send many unnecessary but valid transactions between accounts under its control in an attempt to saturate the network.

With no transaction fees he would be able to continue this attack indefinitely. However, the Proof of Work required for each transaction limits the transaction rate the malicious entity could generate without significantly investing in computational resources.

Nano employed a CAPTCHA faucet system with the goal of distributing NANO as fairly and organically as possible. Opened on October 1, 2015, the faucet required users to complete complex CAPTCHA tests in order to earn coins. The faucet allowed anyone with a computer to participate by contributing time and attention. Upon closure of the CAPTCHA faucet, 39% of the initially planned supply had been distributed and 7,000,000 NANO were reserved for a development fund. The rest were burned resulting in 133,248,297 NANO left as the circulating supply.

Following the closure of the distribution faucet, there was a single fund created with only ~5.25% of the circulating supply. This development fund is managed by the Nano Foundation and is reserved for development, adoption and other community support purposes. As of writing of this report, 58% of this reserve fund has been used.

All NANO tokens are currently in circulation.

The table below shows only the recent developments for Nano. For the full development record from 2014, please see here.

The Nano Foundation maintains updated details about past, current and future node releases and features in the following documentations:

The Nano team stated that the release of Nano Node V19 (Solidus) was delayed due to the size of this update and extensive testings.

The Nano community has developed several wallets for the NANO token. For mobile users, Natrium and Canoe are amongst the most popular wallets. Nanovault.io and Nanowallet.io are the most used web wallets.

Nano has also been integrated into many social media platforms. Users on Twitter, Reddit, Discordand Telegramcan send and receive any amount of NANO freely across the respective platforms. 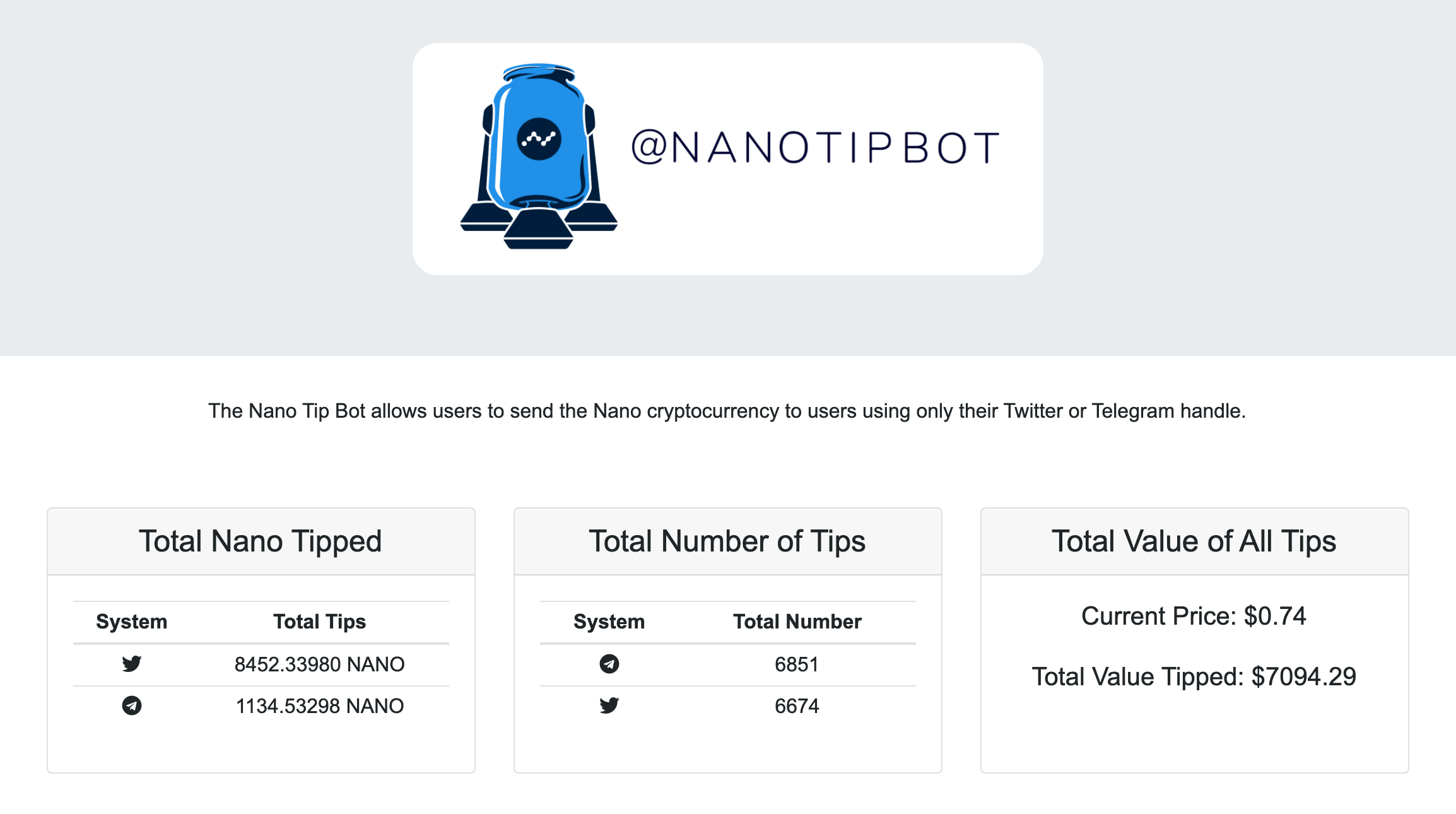 The fee-less and instantaneous transactions of Nano make it suitable for real-time microtransactions in games. NanoQuake is a community project which employs in-game transactions everytime players score a kill or win a round.

The Nano ecosystem is supported by a range of useful browser plugins. The Nano Tipbot extension adds a convenient button to tweets on a Twitter feed, allowing the quick and easy sending of NANO on the platform. Nano Donate is another extension, which facilitates donations to participating websites, supporting multiple addresses per website. 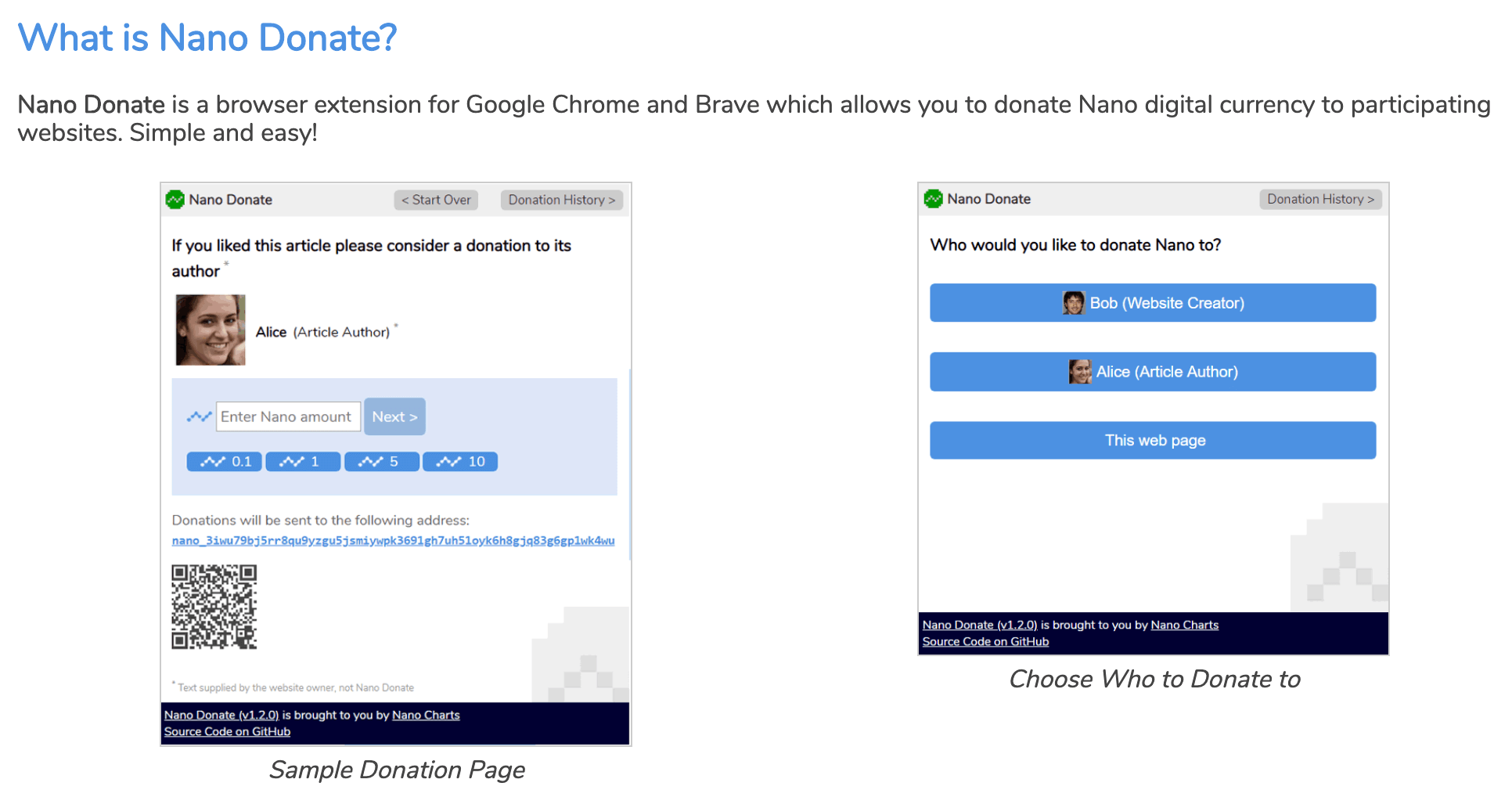 Nano-Faucet visualizer is a community run initiative that provides a real time visual representation of transactions on the block lattice. Nano Ticker gathers information from dozens of Node monitorsparticipating on the network and provides a clearer and broad view of the state of the network, rather than relying on information provided from a single source.

Some services focus on providing metrics and details about representative nodes so users can delegate their voting weight properly to help drive decentralization. NanoChart.info tracks useful details about the movement of weight over time for top reps, along with their uptime and other details. MyNanoNinja is another example that gives representative node owners the opportunity to provide additional details and links to their nodes in the interest of establishing more trust. After extensive community consultation and with regular reviews in place, MyNanoNinja developed a representative rating system that empowers less experienced users to make a more informed choice of representative.

The Nano ecosystem contains more than 100 repositories contributing to various solutions on the network. Six of the largest repos are displayed below: