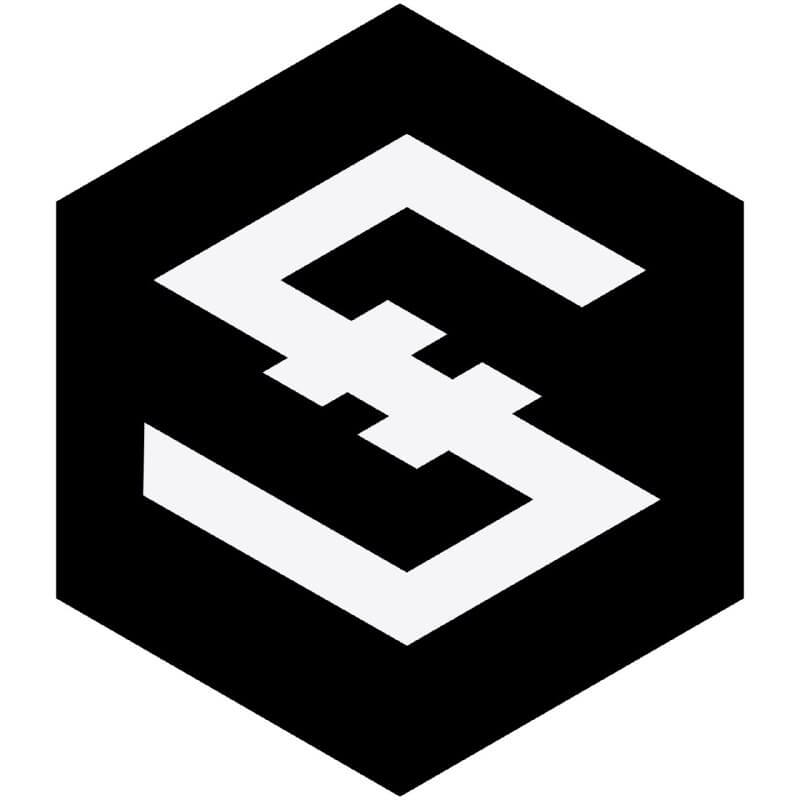 A Blockchain As A Service Platform Focused On Mass Adoption.February 28th 2019
Share this article

Its mission is to become the "underlying architecture for the future of blockchain services".

Three key differentiating factors of IOST when compared to its competitors include:

IOST's design ensures a voting and committee formation process where most nodes are qualified for block production (instead of only the top few nodes) and where nodes with more votes are assigned a higher probability to produce a block.

To achieve this, IOST does not use the voting result as the only factor for selection. Instead, IOST introduces a point system called Servi to decide and rotate members of the committee.

To ensure network safety, PoB has an entry barrier for block producer candidates. In the current version, this barrier has been set to 0.02% of available votes on the network. When a node has received more votes than the threshold, it can then send a specific transaction to become a candidate and participate in the committee formation and block production process.

Although the results of voting do not directly determine the committee members, they do have a proportional impact on the Servi acquisition rate. In the current version, 17 committee members are selected for block production each round.

Each round consists of three steps:

In the current version, the voting period is 10 minutes. This results in the committee rotating once every 10 minutes in the IOST network.

Assume a simplified version where three nodes are selected for each committee, and the current candidate pool is 5.

In the first round, their points are 10, 8, 5, 4, 1. A B and C will become the committee member since they have the highest amounts of Servi. 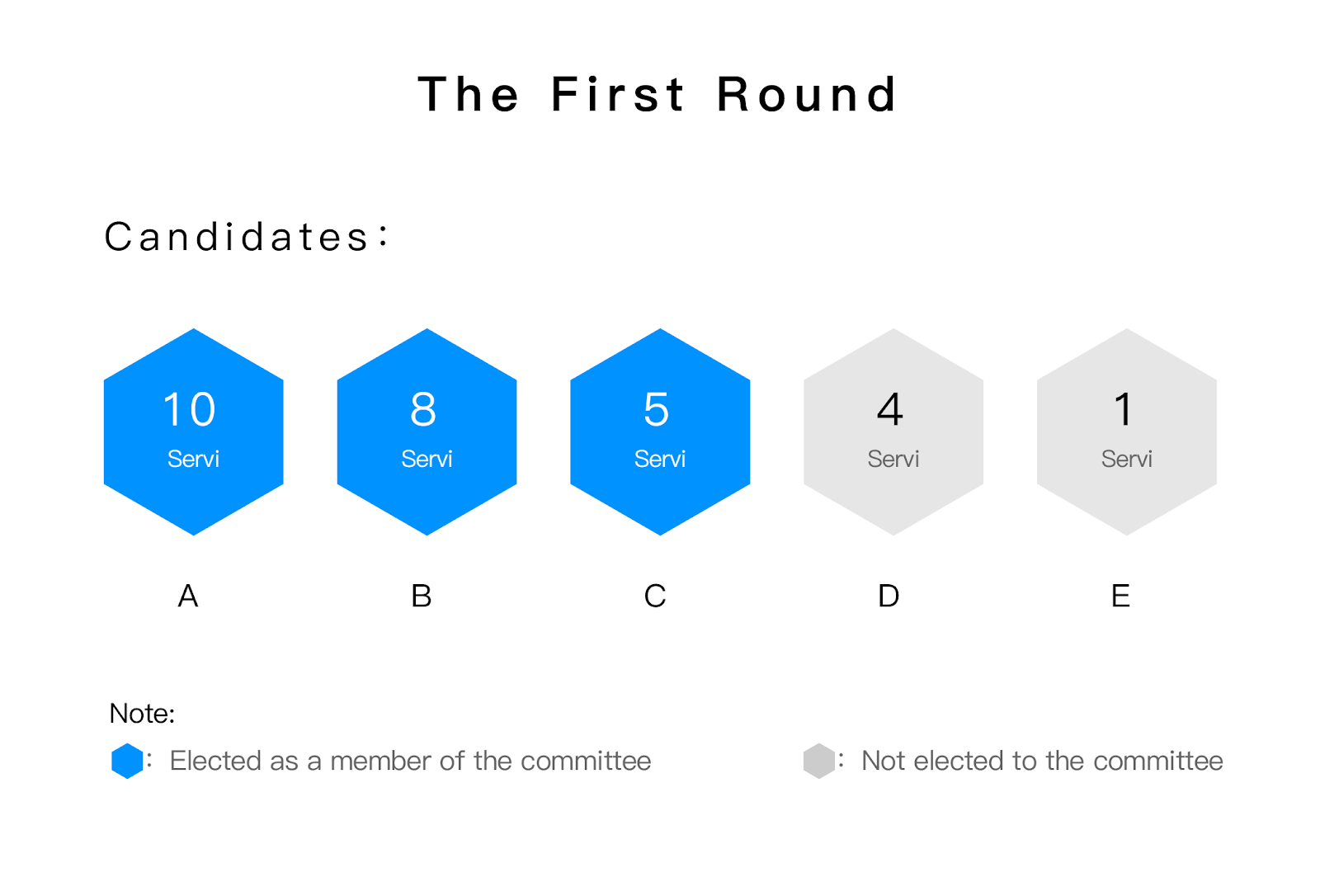 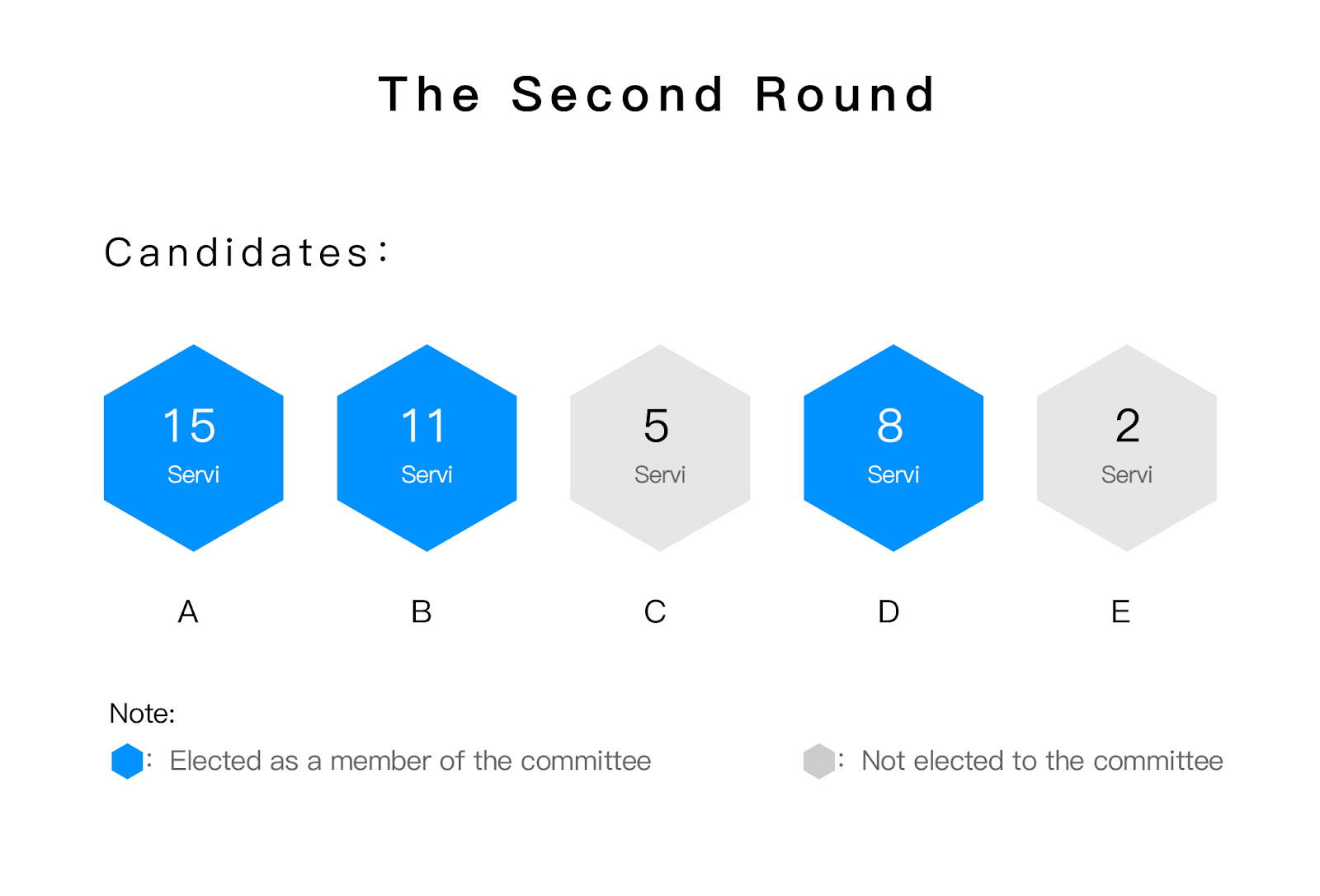 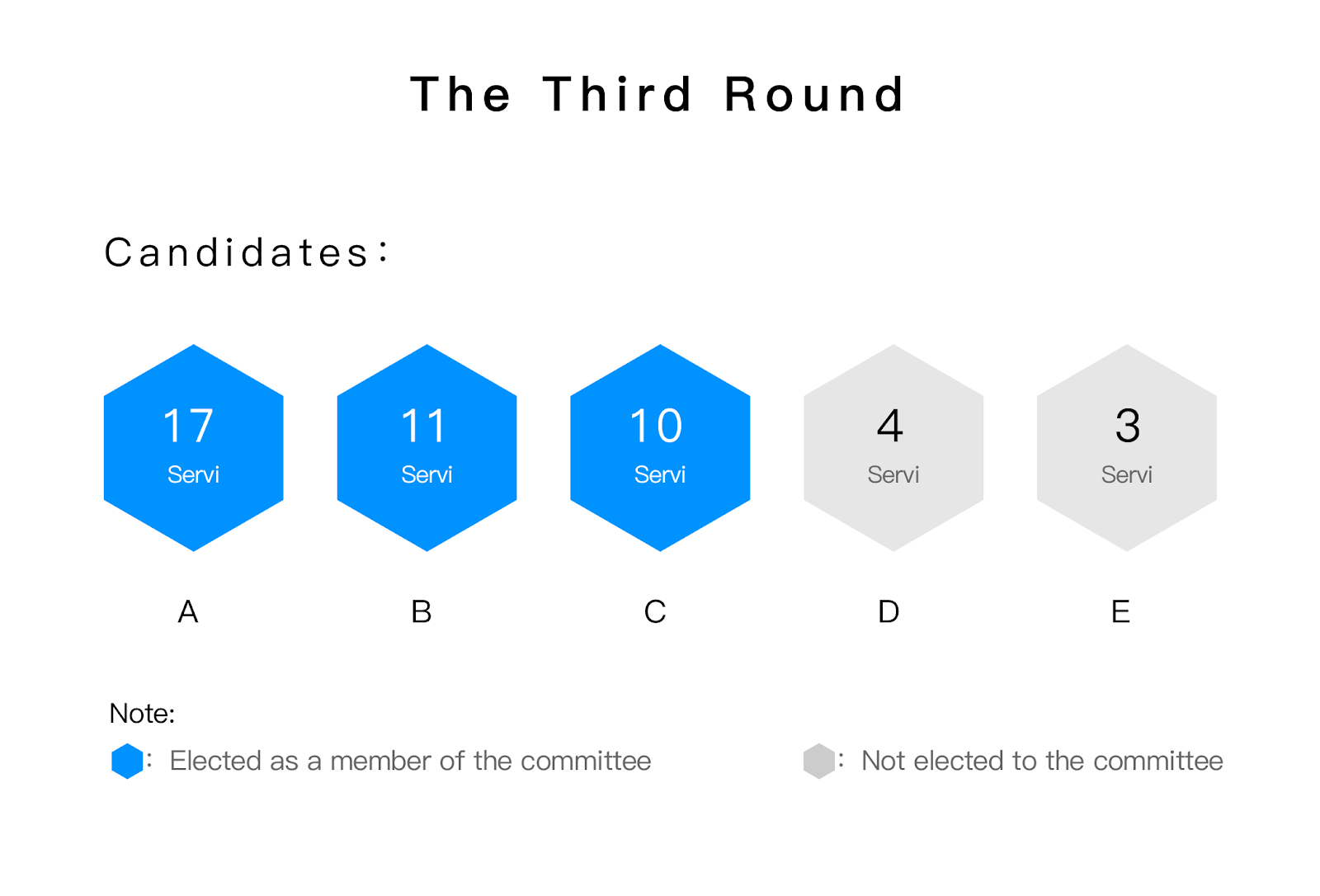 Fast forward to Round 9. Their Servi balances are now 26, 8, 5, 12, and 9. Node E will become a committee member despite only receiving 1 Servi each round. 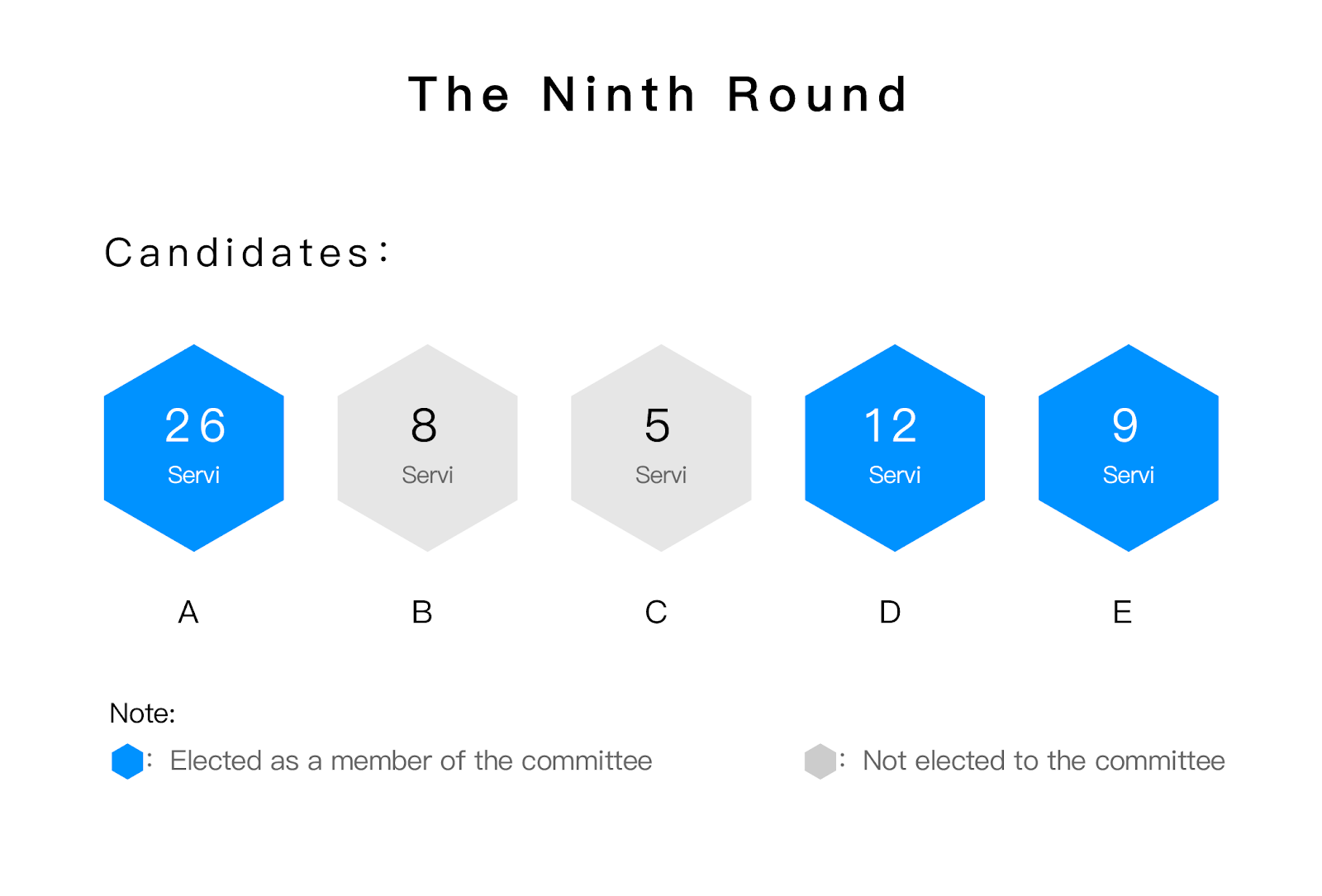 Other features and mechanisms

IOST tokens are paid out to nodes based on blocks produced (25% of 840 million IOST tokens reward pool), the share of votes received and cast by IOST token holders (50% of reward pool), and contribution score to IOST ecosystem development (25% of reward pool). Node rewards will also be given via 10-30% of fees incurred by the users invited by individual Servi Nodes. 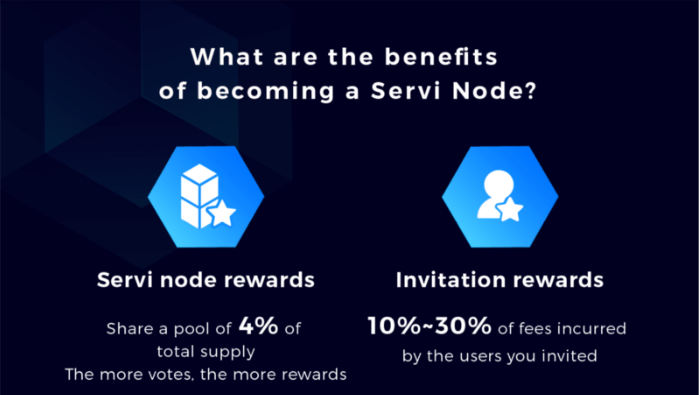 IOST token holders who vote for nodes with their tokens share 50% of that node's rewards, excluding block production rewards. IOST token holders, by staking tokens to vote, will also get 100,000 GAS per day per IOST staked, which can be used as transaction execution fees.

IOST's PoB consensus mechanism aims to provide a more decentralized voting and committee formation process by introducing a Servi point system, where the number of blocks produced will be proportional to the votes they receive.

While this design provides advantages in achieving decentralization of the block production process, it also does not compromise the benefits of a DPoS system that enables high scalability and throughput speeds.

IOST holds its funds in cold storage with multi-signature wallets. The keys are held by the CEO, CTO, and CDO. 2 out of 3 signatures are required to unlock the multi-sig wallet.

As of January 18th 2018, IOST has already used 9.81% of the funds from their total raise, all of which were used for community building.

The following chart represents the number and breakdown of all IOST tokens that are to be released into circulation on a monthly basis.

Remaining tokens for Token Treasury, Community, and BD & Marketing will continue to be released until 2036.

IOST has been on time for all communicated milestones, with an updated roadmap approximately 6 months ahead of the initial schedule.