Fetch.AI brings together machine learning ("ML"), artificial intelligence ("AI"), multi-agent systems and decentralized ledger technology to create an economic internet — an environment where digital representatives of the economy's moving parts (such as data, hardware, services, people and infrastructure) can get useful work done through effective introductions and predictions.

Fetch.AI envisages a world in which everyone owns numerous economic agents on the Fetch.AI platform which operate in series or in parallel to construct solutions to today's and tomorrow's complex problems which are far more elegant and efficient than humans can produce.

Because the product is at testnet stage, there are no metrics on downloads, DAUs or any other usage or product metrics at this time. However, here's a conceptual diagram on how the Fetch.AI ecosystem is intended to work: 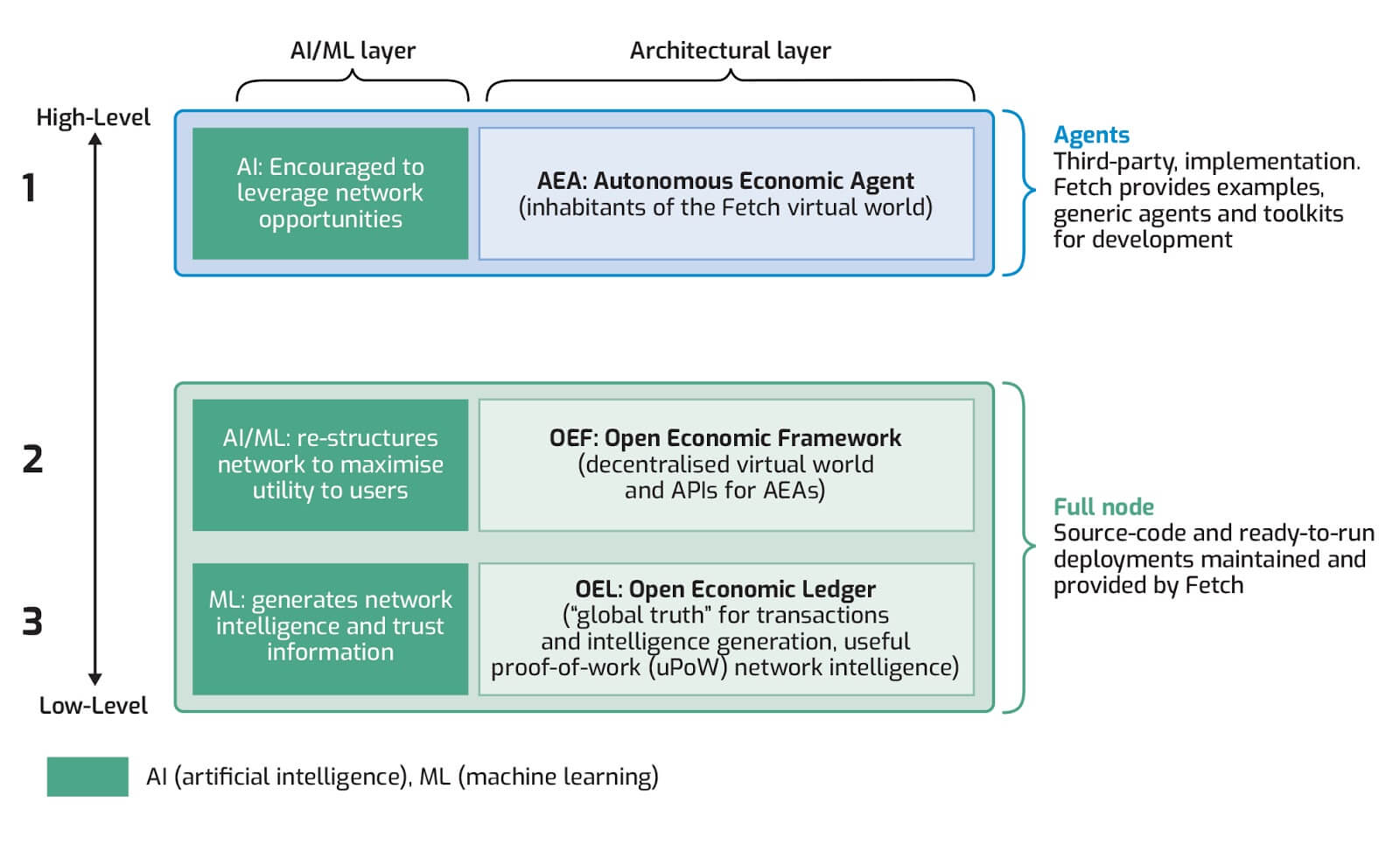 The ledger is scalable by design, so its exact performance will vary depending on the configured resources available in the processing nodes. In private tests, Fetch.AI has achieved speeds in excess of 30,000 transactions per second. It is expected that Fetch.AI will gradually increase resources allocated to the test network as demand increases over time.

It is expected that at its inception, the test network will have a block time in the order of minutes. This conservative value will be reduced over time to reflect improvements to the consensus protocol and progressively more realistic test network deployments.

This is a second-layer protocol that provides services to agents. Agents connect to the OEF in order to find, negotiate with, and then do business with other agents on the network. It is designed to present agents with semantic, geographic and economic views on the world. Nodes can either be pure ledger nodes or ledger/OEF nodes. In the initial implementations, the OEF nodes come in two classes: "trusted" and "trustless". The "trustless" nodes can be operated anonymously, similar to the pure ledger nodes. The "trusted" nodes can be granted access to additional agent information to provide intelligent search and discovery capabilities. Operators of these nodes must have a public and legal identity, and receive accreditation by the Fetch.AI Foundation. 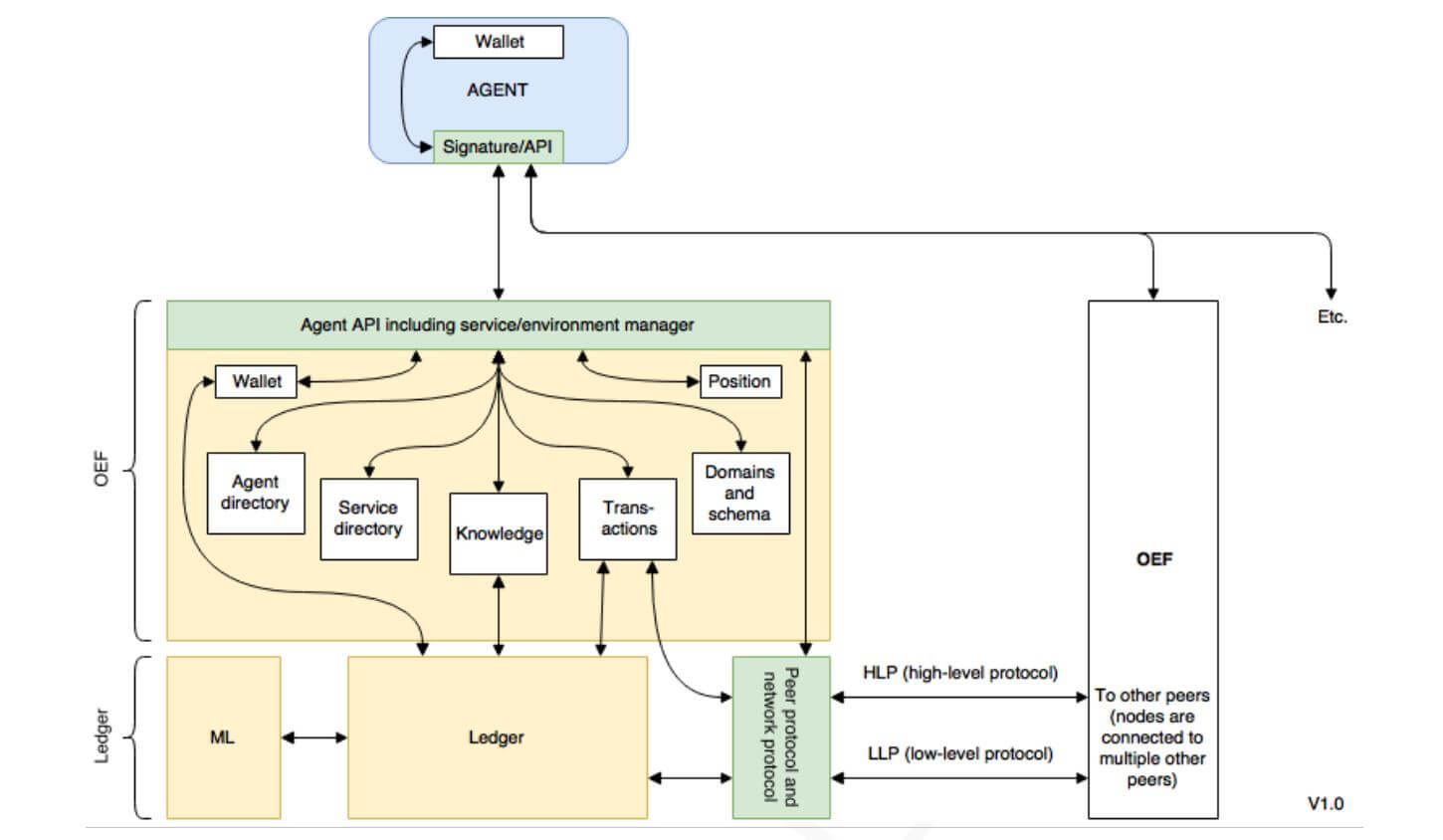 There will be a fixed number of divisible tokens that are used on the Fetch.AI network as the digital currency for all transactions, as well as for network operations such as secure communications. Tokens can also constitute an access deposit for both nodes and agents wishing to perform certain operations (as a security mechanism to discourage malicious behavior).

3.4 Token governance and use of funds

As of December 2018 1st, Fetch.AI has used approximately 85% of SAFT funds according to the allocations below:

Of the Ether raised across the three SAFT rounds (24,596.5 ETH), the majority (21,125 ETH i.e., 86%) has been converted into fiat currency during Q4 2018 and Q1 2019. As Fetch.AI costs predominantly originate from the UK in staff and office costs, this Ether has been converted to British Pounds.

For comprehension and convenience, the table below uses US Dollars.

The following chart represents the number and breakdown of all FET tokens that are intended to be released into circulation on a monthly basis.

Note: Mining Rewards are intended to be issued in perpetuity at a decaying issuance rate.

Various tranches of token lockups and vesting schedules are detailed as follows:

Fetch's token allows agents access to the digital world. It enables them to exist in this world, in multiple locations, and explore it looking for other agents to deliver value to or gain value from. This value can be in the form of access to services, data, infrastructure, or data processing via AI and ML algorithms.

Fetch.AI tokens can be used for many purposes, the largest six of which are: 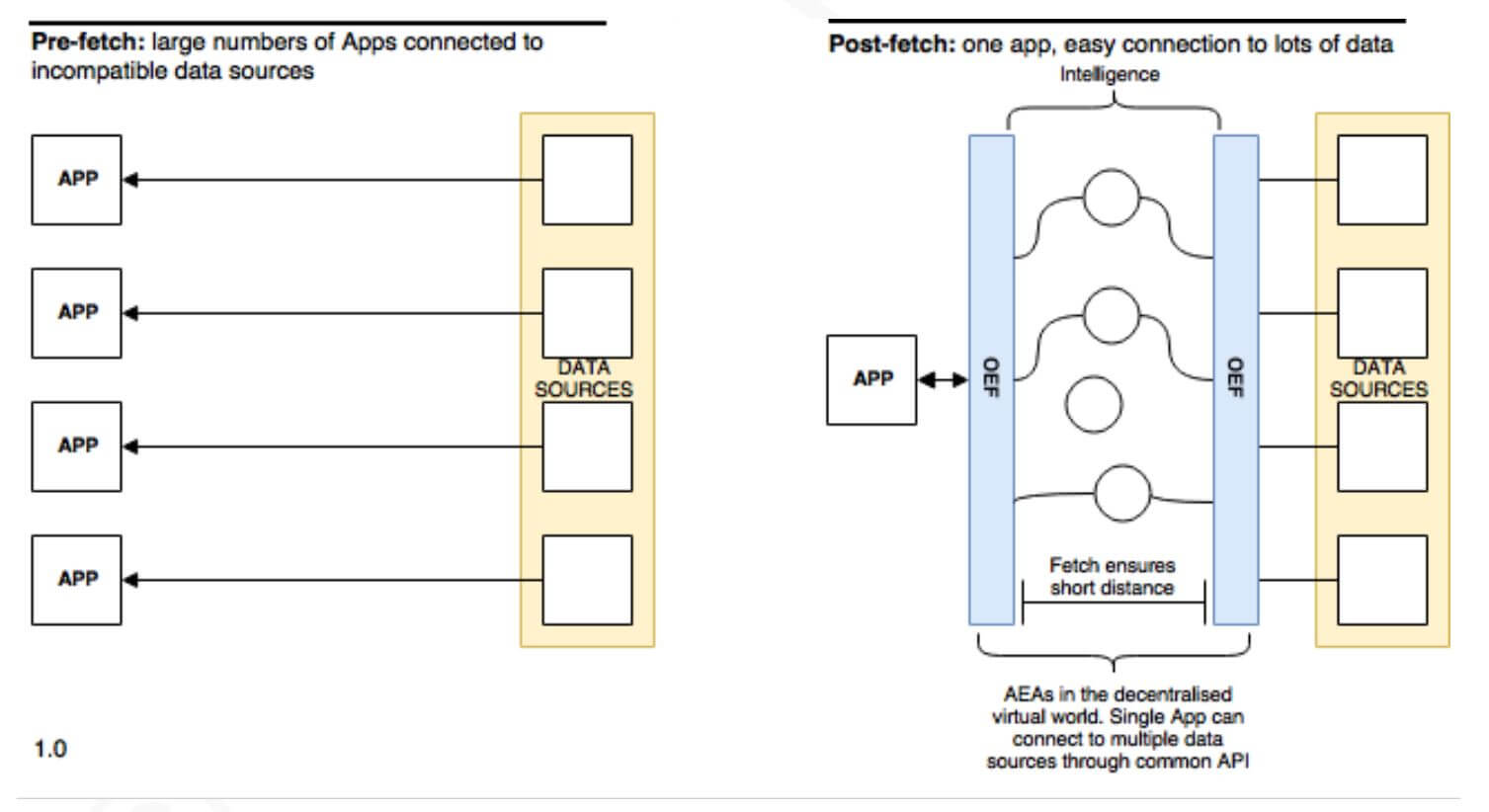 When the TGE was delayed in Q4 2018 due to market conditions, Fetch.AI de-emphasized their public testnet and focused their efforts on the private network and building examples with the project's increasing number of commercial partners. Whilst Fetch.AI have incurred some delays in development, they have been minimal.

Alpha Delivers the initial mainnet OEF and ledger functionality in its initial form. All building blocks will be present

Beta All expected mainnet functionality undergoing tuning, optimisations and tweaks. Beta will extend out to the mainnet release

For Phases 1 and 2, the test network will employ a simple Proof-of-Work ("PoW") consensus mechanism. It is the intention that these phases of the testnet will allow developers to begin developing smart contracts and evaluating the Fetch.AI ecosystem of applications, libraries and services. In addition, the testnet in Phase 1 will be restricted to selected invitees — this primarily is to ensure a controlled ramp up of load on the network. Sign up will not be restricted but token holders will gain priority access to the network.

Fetch.AI expects that the node population will vary considerably based on public involvement. As such, Fetch.AI and some chosen partners will additionally run a number of core nodes in the network, and this is likely to be in the range 100-500 nodes.

In the third phase, up to June 2019, Fetch.AI will deploy a large update to the test network which will include the first release of Fetch's final consensus mechanism. This will be released alongside updates to the ledger internals and smart market support. The testnet will remain the primary network until the launch of the main network at the end of 2019.

Community growth is a tremendously important aspect of the Fetch.AI project. Fetch.AI has held numerous community-orientated meetups across the globe during Q3 & Q4 2018. This program will ramp up in 2019, particularly with the release of the project's testnet, leading up to mainnet launch. For example, these events could be augmented with hackathons.

Furthermore, Fetch.AI regularly showcases the work of different members from their team to explain the aspect of the project they are working on. This emphasizes the innovative technical challenges of the project. The response to these articles has engaged technical enthusiasts and opened up in-depth discussions in the blockchain development community.

During 2018, Fetch.AI also presented extensively at blockchain, AI and relevant commercial sector conferences across the globe. These platforms provide the opportunity to discuss the Fetch.AI vision and generates enthusiastic discussion and participation in the development community as well as interest in exploring commercial partnerships.

In Q1 2019, Fetch.AI will be releasing a dedicated developer community website where users can consume technical documentation, showcase their agents, discuss and collaborate on all aspects of Fetch.AI's platform and technology. It also allows for the co-ordination of meetups, hackathons, developer conferences and other activities where Fetch.AI and the community can interact with each other for mutual benefit. Fetch.AI values the developer community enormously: a vibrant, active and productive group of developers are essential for the growth of the network and the applications built upon it.

Participation and engagement in Fetch.AI's vision has been global in nature. It has been mostly active from independent developers who wish to build agents ready for mainnet launch and from corporate strategy and R&D teams who truly appreciate the application of Fetch.AI's platform to their sector(s).

In terms of social media growth, Fetch.AI has seen increased participation as a result of announcements, PR, and speaking at conferences. In addition, Fetch.AI will launch paid media campaigns in the run up to key dates in the project's calendar (e.g., token sale, testnet / mainnet launch).

Fetch.AI will continue to leverage wider communities - for example, sponsored video coverage and interviews with well-known influencers from the cryptocurrency, blockchain, AI and general technical fields.