Everipedia is a community-governed knowledge and information platform powered by the EOS blockchain, where anyone can participate in sharing what they know and providing value to others. Everipedia allows users to create pages on any topic as long as the content is properly referenced and neutral.

To make a sustainable and decentralized knowledge platform, the Everipedia team introduced a three module system, consisting of a token module, a governance module, and an article submission module. The governance module allows for submitting changes to the community of token holders for approval, the token module is responsible for making changes to the token balances of addresses, while the article module is used to propose edits to be included in the database.

Furthermore, Everipedia has introduced a decentralized prediction market named PredIQt, where any user can create markets on any future event. Users can also purchase and trade shares in the outcomes of those events.

In Everipedia, users are required to stake IQ tokens to propose edits, vote on edits, and propose/vote on network governance actions. In PredIQt, the IQ token is required for payment in the prediction markets, staking for resolving the outcome of markets, and paying all system-wide trading and creation fees for new markets.

Everipedia aims to build the most accessible online encyclopedia, and not be as restrictive as Wikipedia. The name Everipedia derives from “everything” and “encyclopedia”.

Everipedia is similar to a peer-to-peer Wikipedia network that relies on the EOS blockchain technology and features a cryptocurrency token called IQ to incentivize editors for content generation with tokens that have a legitimate monetary value. Being a peer-to-peer network, it also gives them the ability to stop geographical censorship of its content. Everipedia launched on the EOS blockchain on August 9th 2018. 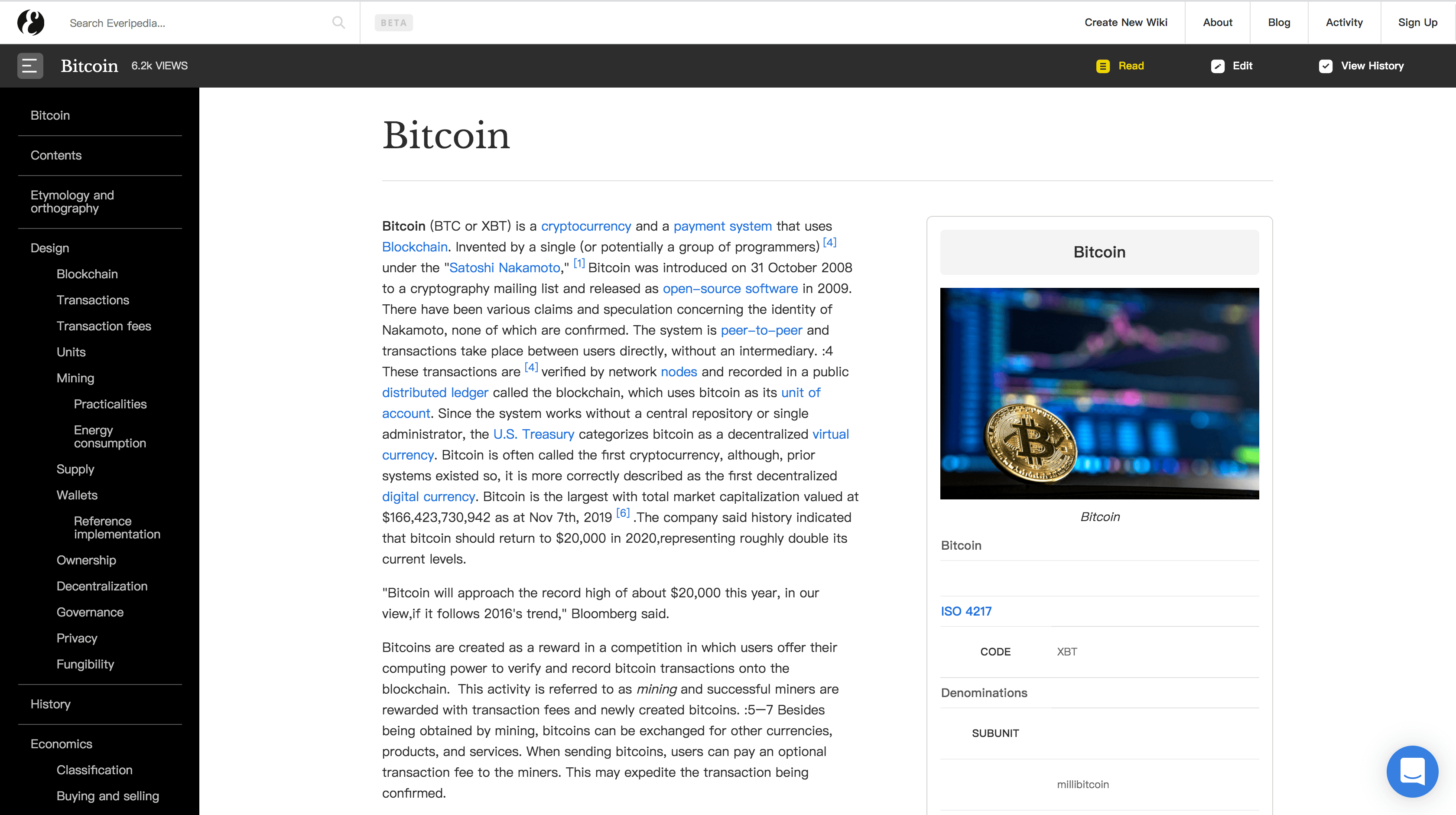 As described in its whitepaper, PredIQt is a prediction market protocol that features three classes of users:

Hence, IQ is the utility token that powers the needs for all three different classes of users. Below is the graph for growth of new markets created since the launch of the final PredIQt 2.0 product and the total volume growth of all IQ used to purchase shares. 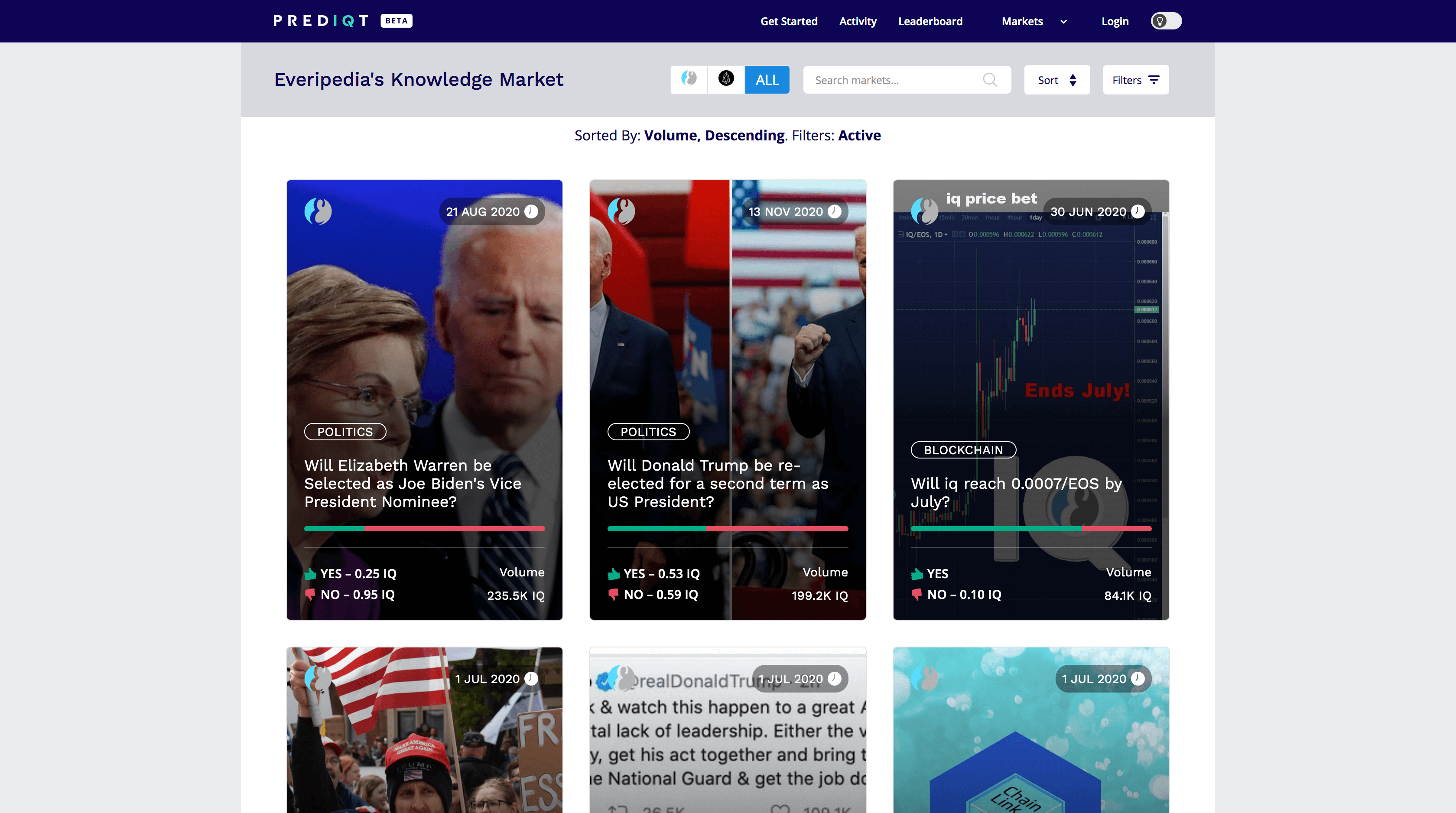 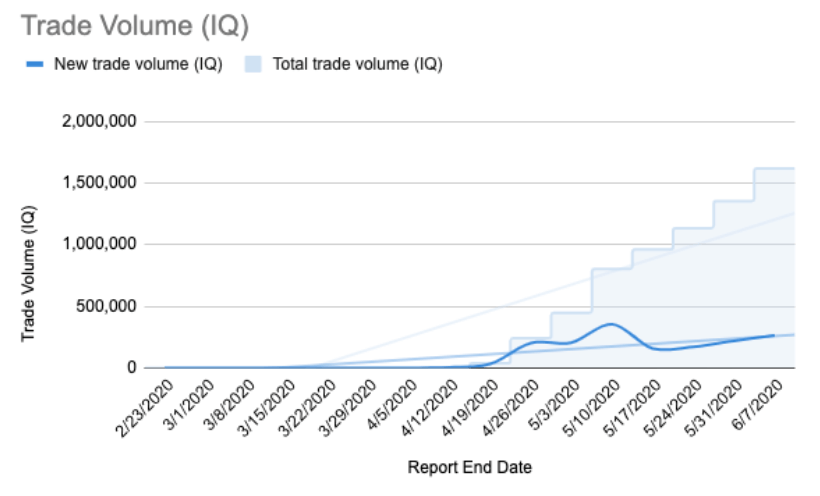 For more info on PredIQt specs, users can read the FAQ

PredIQt Earn is a money lending market similar to Compound.Finance on Ethereum. This lending market allows users to deposit tokens to earn interest or borrow tokens and pay interest. It enables individuals to borrow IQ tokens locked in prediction market contracts so that the idle IQ that sits in the prediction markets can accrue interest and increase payouts for participants. PredIQt Earn also allows users to earn interest on IQ tokens they have used to purchase prediction market shares while the market is open for long durations.

PredIQt Smart Assets allows anyone to collateralize IQ tokens to generate synthetic assets such as iqUSD, iqOIL, iqBTC, and others. These "smart assets" can then be traded, lent, or borrowed through PredIQt Earn as well as held for exposure to a customized basket of assets.

By participating in exotic prediction markets on real events with smart assets hedging, any user can build a basket of custom exposure to a wide array of investments.

Everipedia and PredIQt are decentralized applications (dApps) powered by the EOS blockchain. The contracts are all written in C++, compiled to WASM, and deployed to the EOS mainnet.

The Everipedia dApp is a decentralized knowledge database where holders of the IQ tokens can stake, create content and curate other editors’ content. The approved content and majority vote curators earn part of the IQ reward every 30 minutes.

The PredIQt platform is a prediction market with additional DeFi functionality. The platform tokens (i.e., IQ tokens) are used to buy shares, pay fees, and stake on market outcomes. All parts of the IQ token ecosystem will be utilizing EOSIO smart contracts, front-end web application technology, and the InterPlanetary File System (IPFS).

To maintain a sustainable and decentralized knowledge platform, the Everipedia team introduced a three module system, consisting of a token module, a governance module, and an article submission module.

The token module is responsible for making changes to the token balances of addresses by transferring tokens, applying transaction fees, minting tokens, and locking tokens for the article consensus process.

IQ tokens will be minted every 30 minutes through the edit and curation process. Votes of token holders will decide if proposed edits shall be approved and the editor be rewarded with IQ tokens. At the end of the 30 minute IQ reward period, editors will receive IQ rewards in proportion to the value of their contributions. These minted tokens can be partially re-allocated by a governance action for a developer fund, bounties, or any other use case. In the event where no edits or votes are made in a specific 30-minute period, no IQ will be rewarded in that period.

Governance actions can modify the specifications in any of the three modules, but not the databases containing token balances and articles.

The governance module allows for submitting changes to the community of token holders for approval, and deploys these changes once approved. This allows for the community to come to participate in setting the rules that govern the entire network. Discussion about governance actions can take place off-chain on social media and other communication hubs, but deployment of new code will be carried out on-chain.

Articles will be stored as gzipped HTML files, as using the HTML document object model allows for high compatibility of possible front-end combinations for the data which is retrieved from the network. By using HTML, any developer can create a front-end interface to display articles in customizable manners, submit edits, and analyze data inside the document. Designated HTML attributes will be used to mark specific portions of articles, so that all front-end software can easily detect standard sections of an article.

The Everipedia project and its investors retained 49% of the initial 10 billion IQ tokens and distributed the remaining 51% to all EOS token genesis balances soon after the EOS mainnet launch. This 51% token airdrop was conducted on July 12th 2018. The company received equity funding of 30.00 MM USD from EOS VC to build out the Everipedia and PredIQt ecosystem.

The IQ tokens which are held by the team and investors will be vested with a quarterly release schedule, whose description can be found here. Vesting will start from May 4th 2020 and end on August 4th 2022.

IQ is an inflationary token, which is minted every 30 minutes through the edit and curation process. There will be a fixed amount of tokens minted each day. The amount will be reset every day at 00:00 UTC.

The current and planned use cases of the IQ token include:

The project team also plans to conduct a quarterly IQ token burn, using part of the revenue earned from Everipedia and PredIQt.

Everipedia aims to attract community members that want to share knowledge from across the globe. Current language support includes English, Mandarin, Korean, and Spanish. The project will gradually support more languages as it expands.

Current community growth strategies of Everipedia and PredIQt include:

Future community growth strategies of Everipedia and PredIQt include:

Community and social channels (data as of June 18th 2020)