A Scalable Value Transfer Protocol For The Digital Economy.June 20th 2019
Share this article

Elrond's testnet is already live and can process upwards of 10K TPS, with 5-second latency and minimal cost (based on 5 shards). The Project aims to be a platform for easy deployment of programmable money and dApps, thus becoming the backbone of an open, permissionless, borderless, globally accessible internet economy.

Elrond believes that its high scalability, fast transaction speed, and low transaction cost makes it well-suited for machine-to-machine transactions and the IoT economy.

Elrond is a complete redesign of blockchain architecture with the aim to achieve global scalability and near instant transaction speed. Elrond focuses on combining these key innovations: 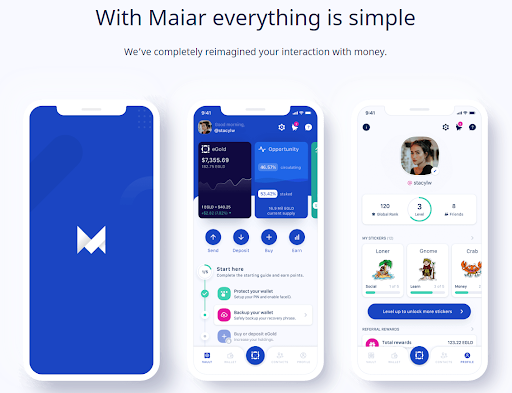 The Elrond economic model has a capped supply and decreasing issuance, furthering scarcity with adoption. The token is named eGold (EGLD) to convey the notion of a digital store of value for the next billion users.

The Elrond Network is certified carbon negative by Offsetra, as it offsets more CO2 than the network is accountable for.

The blockchain has low system requirements and can run on anything from an ordinary computer to T2 medium AWS machines.

The blockchain features epochs of ~24 hours and rounds of ~5 seconds. All the validators in Elrond's network will be split among multiple shards, where they will only have to synchronize the state for the current shards and process transactions only for their current shard. In order to prevent collusion amongst validators, up to ⅓ of the validators in a shard will be reshuffled to other shards at the end of every epoch. Liveness is not affected by this because the fast state synchronization for the newly reshuffled validators needs to synchronize only the state for the current epoch (~24 hours timeframe), while the remaining ⅔ of the unshuffled validators in the shard can still process transactions.

Based on the randomness source in the previous block, n validators are chosen using a deterministic function. Every other validator in the shard can compute the n validators and verify the correctness of this nomination. The first selected validator will be the block proposer for the current round.

The block proposer selects from among all received signatures, creating a subset of at least ⅔*n + 1 signatures, and creates a bitmap for his selection, where B[i]=1 if the ith member of consensus group was selected and B[i]=0 otherwise. The proposer then aggregates the signatures and attaches the bitmap and signature to the block. It must also sign the end result to "seal" the configuration for (B[ ], aggSig) before propagating the resulted block through gossip inside the shard.

For an in-depth example of how the cross-shard transactions are being executed and how the communication between shards and the metachain occurs, the entire process is illustrated using the simple two shard case and the metachain as shown in the figure below. 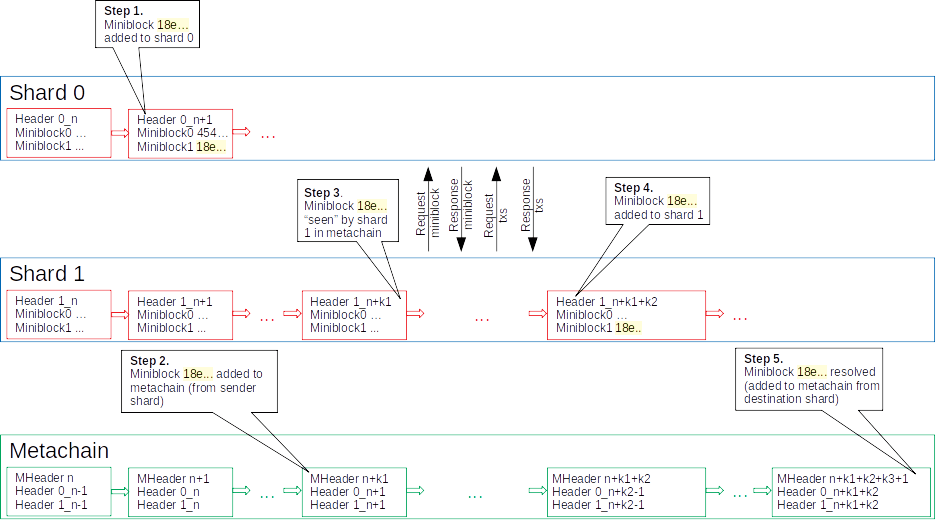 The strategy for processing one cross-shard transaction is to use an asynchronous model. Validation and processing is done first in the sender's shard, notarized in the metachain and then finalized in the receiver's shard.

Metrics that are being monitored to check improvement of the network include: latency, bandwidth limitations, running each validator node on a separate machine with very limited compute power (average dual-core CPU with 4GB of memory), and different geographic locations.

Key stats for the current testnet are as follows:

The team is working on improving the network stack used for communication to reduce the bandwidth and network overhead within the consensus group of each shard.

Another improvement from the initial prototype architecture, has been upgrading the consensus model to reduce the number of communication rounds between consensus groups on each shard from 5 to 2.

An illustration of Elrond's latest implementation of Secure Proof of Stake is as follows:

An illustration of Elrond's Adaptive State Sharding Approach is as follows:

The upcoming testnet releases will include a public adversary game (Battle of Stakes) that will combine all the metrics together and will produce the highest level of stressing the protocol, allowing us to improve and find new opportunities for improvement. New stress results will follow in the upcoming weeks.

Writing Smart Contracts on Elrond is made easy by frameworks in Rust, C, C++ and other languages compiling down to WASM. The erdpy back-end is a complete CLI & Python SDK for building, deploying and interacting with Smart Contracts. The erdjs framework allows for front-ends to be deployed using TypeScript & JavaScript and makes testing easy with tools such as Mocha.

The Elrond Integrated Development Environment is available via the Microsoft marketplace as a Visual Studio Code extension. Its integration with the SC framework allows developers to focus solely on smart contract logic and handles boilerplate code, dependencies and inheritances, while offering a transparent debugging interface.

The Elrond token (EGLD)'s uses include, but are not limited to: payment for transaction fees and payment for the cost of deploying dApps on the network and rewards for various contributions to the network.

During its first few years, the project's main focus will be on establishing Elrond as a global public utility within the internet ecosystem, offering a scalable, efficient, and interoperable blockchain architecture, only accessible through EGLD tokens. All activity within the network (i.e., making transactions, running smart contracts, providing services like staking, or running a validator node) will be fueled by the EGLD token. Both startups and large-scale enterprises will be able to build decentralized applications on top of Elrond's network and integrate Elrond as part of their infrastructure solution for products and services.

As of the June 2019, Elrond has used approximately 5% of TGE funds according to the breakdown below:

Elrond plans to hold sufficient fiat reserves to fund the operational costs for at least 18 months. The rest of any funds held in crypto will be stored in cold wallets with multisig support.

The following chart represents the number and breakdown of all EGLD tokens that are intended to be released into circulation on a monthly basis.

3.5 Token overview and use cases

The use cases intended for EGLD include but are not limited to:

In order to drive adoption and build a robust ecosystem, Elrond has partnered with several companies and blockchain projects, including the following:

The team is also constantly engaging with key opinion leaders from various countries, to grow outreach and raise awareness about Elrond.

The team plans to continue their AMA series targeting specific regions of the world. Next AMAs will focus on Asia, Russia, and Central Europe, and will be conducted in multiple languages.

Growth strategy through events and conferences

Elrond has been present at a few significant conferences and technical events such as SFBW, Devcon, Blockchain Malta Summit, and have also held a number of local meetups to get first hand feedback from the community.

More events (to be announced) are lined up where the team will showcase their testnet demo and discuss other partnership opportunities.