A Blockchain Platform For Programmable And Confidential Securities.July 22th 2019
Share this article

Dusk is built by a team of entrepreneurs, engineers and researchers with technical experience at Amazon, TomTom, Mozilla, Reaktor, and blockchain backgrounds (Zcash, City of Zion, NEO Research, etc).

Dusk Network is currently in testnet phase and aims to be a blockchain protocol designed for easy deployment of programmable Zero Knowledge dApps, thus becoming the backbone of an open, permissionless and global privacy-oriented dApp ecosystem.

The Project aims to remove technical barriers that have hindered mainstream issuance and trading of products such as security tokens. Compliance, auditability and privacy are built into the open, permissionless Confidential Security Token Standard ("XSC").

At its core, it features:

To do so, Dusk relies on a few core characteristics:

By allowing Dusk to be openly accessible, Dusk Networks's mission is to become "the privacy infrastructure of choice for an entire ecosystem of solutions, whether in finance, governance, cybersecurity, or something completely new".

With a combination of privacy and compliance, Dusk is designed for the financial industry use, and as such, Dusk's adoption strategy focuses on the security token market, which is in need of a purpose-built blockchain.

Dusk Network uses zero-knowledge cryptography to allow network participants to prove the correct outcome of a wide range of operations (i.e., transacting a lawful amount of tokens, participate to a blind bidding auction, prove right-to-access to a service, etc) without revealing identities or any transaction details while provide proof of correct computation in a trustless manner. The browser nodes are used to provide these different types of verification.

Dusk nodes compete in the block selection process by anonymously committing (i.e., staking) an undisclosed amount of Dusk tokens and thus prove compliance to the process by generating a Zero Knowledge proof of such transaction. By delegating to the browser the workload of verifying (or even generate) Zero Knowledge proofs, they can leverage game theoretic principles to let the community help with the computation power required to verify Zero Knowledge proofs multiple times and bring Dusk Network one step closer to a fully browser based blockchain experience.

The roles in the protocol are split between two different node types: Block Generators and Provisioners.

Block Generators compete in a recurring lottery for the right to submit block candidates, while Provisioners run consensus over the selection of the lottery winners and acceptance of their proposed block.

In order to become Block Generators, full nodes submit a confidential transaction called Blind Bid. Provisioners, instead, are required to stake their DUSK publicly, while participating in the consensus. 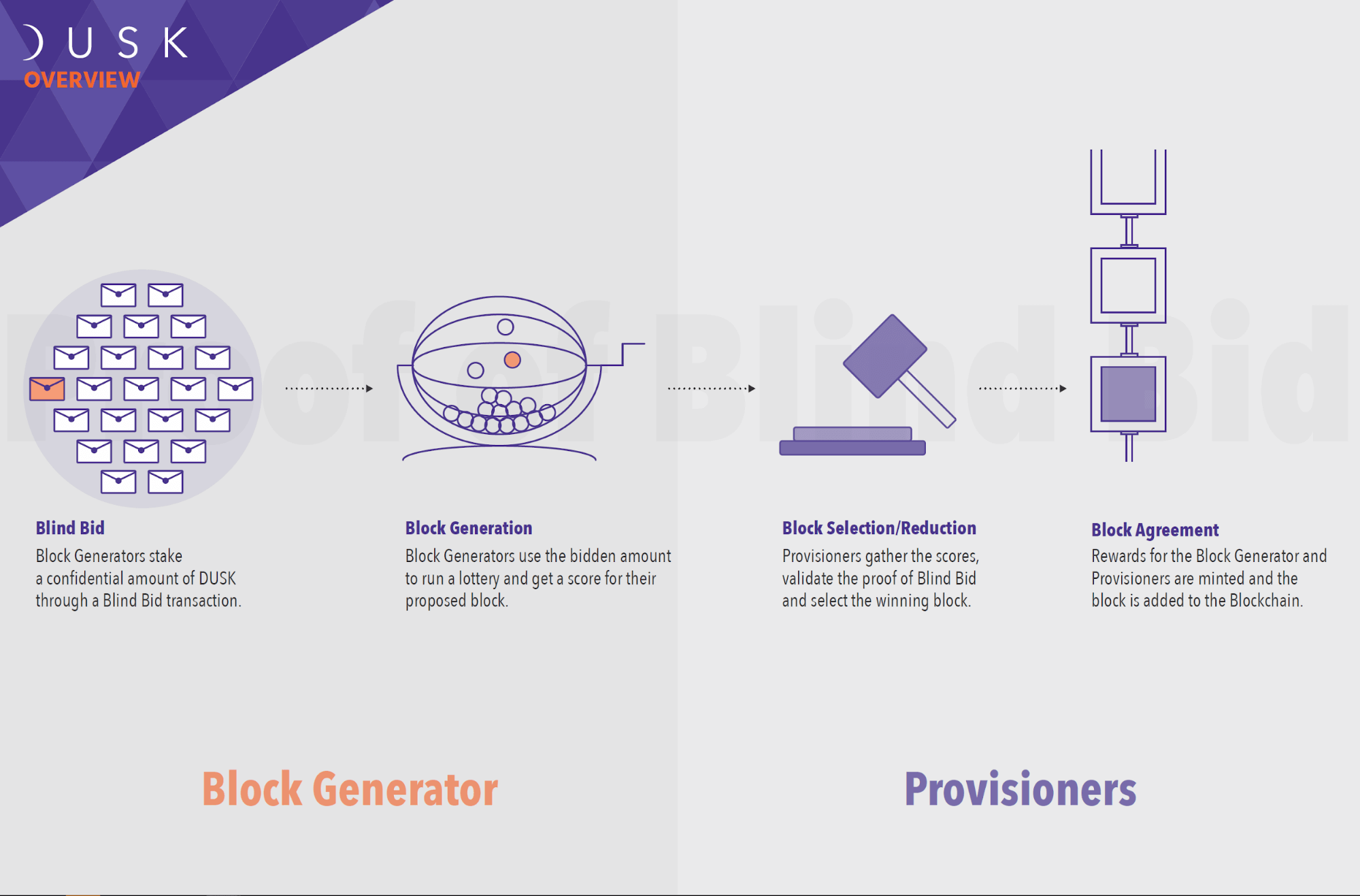 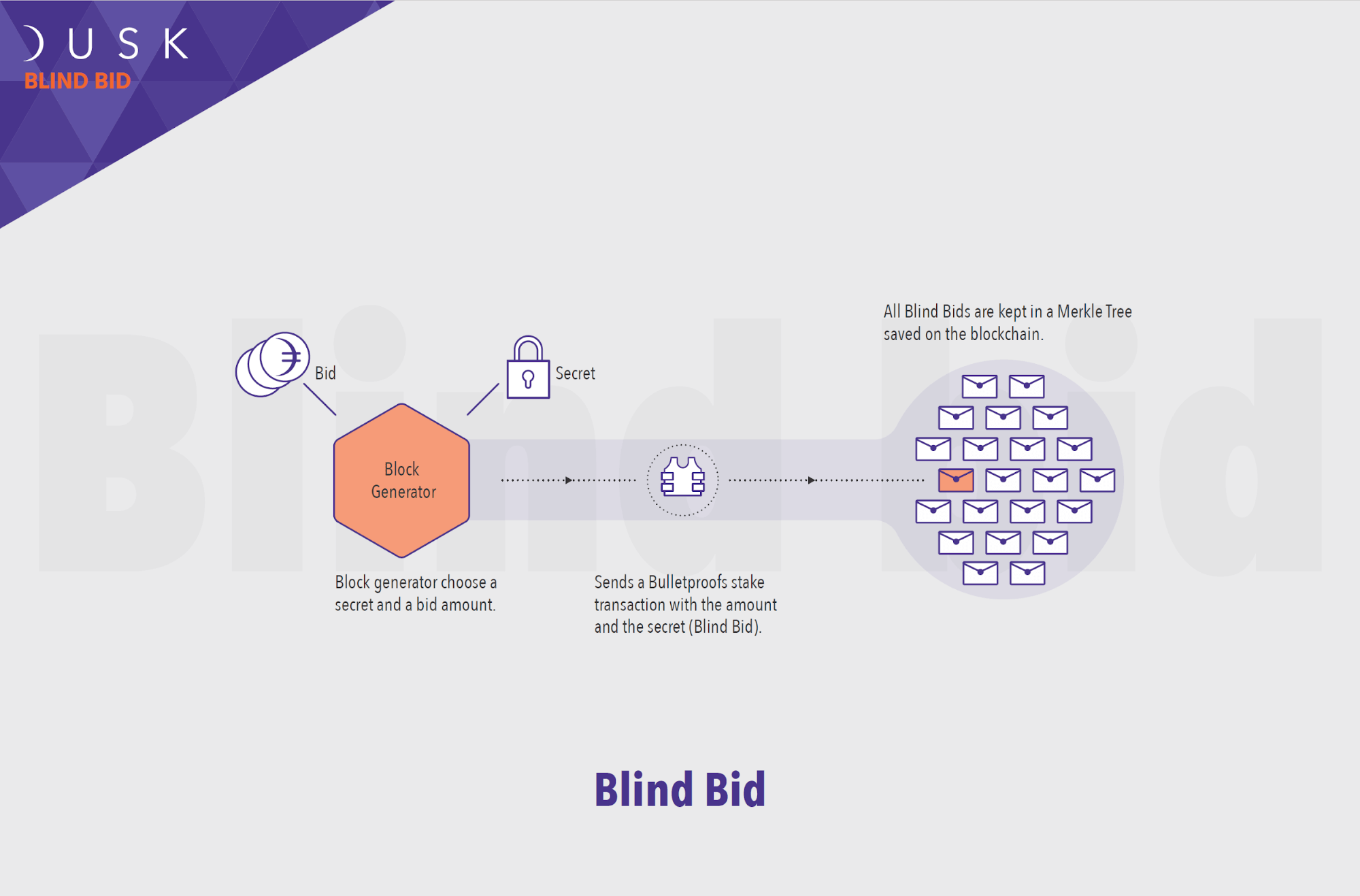 During the Blind Bid phase, aspiring Block Generators stake an amount of DUSK for the right to participate in the block generation lottery. The stake transaction is called a Blind Bid, because the amount of DUSK staked and the identity of the Block Generator are kept confidential. The Blind Bid also carries a secret number 'k' chosen arbitrarily by the Block Generator. This way she can claim ownership of her own transaction at any time, despite its confidentiality and without disclosing her identity. All valid Blind Bids are kept in a Merkle Tree saved on the blockchain. 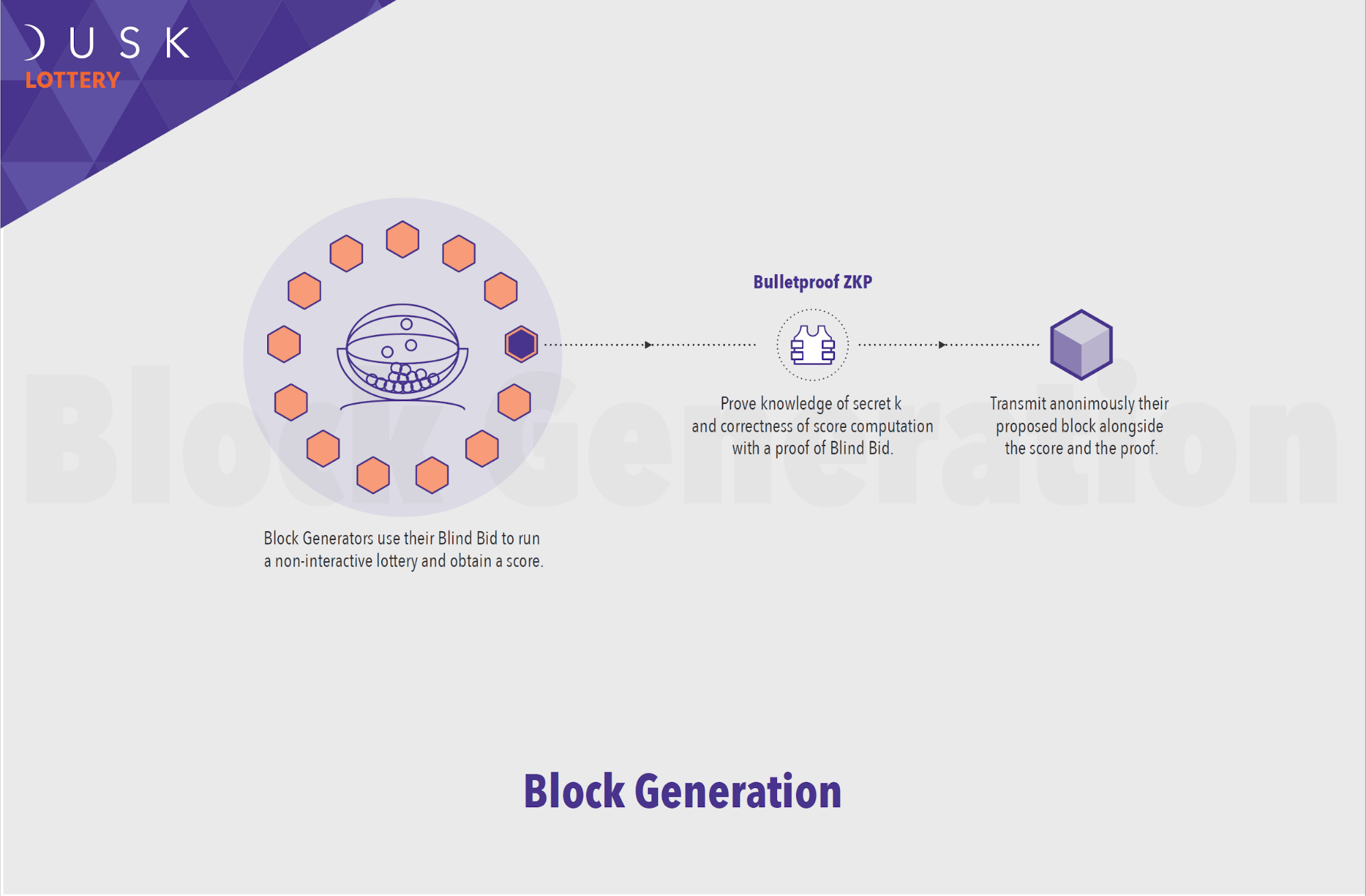 During each round, Block Generators use their Blind Bid to run a non-interactive lottery and obtain a score.

The amount of DUSK in the Blind Bid positively affects this score.

Thus, Block Generators anonymously transmit their proposed block to the Provisioners alongside the obtained score and the Zero Knowledge proof of Blind Bid; therefore proving knowledge of the embedded secret 'k' and the correctness of the score computation. Due to the reliance upon Zero Knowledge proof of correctness, proof of Blind Bid provides a significantly higher level of security if compared to public Proof-of-Stake systems while showing an equal resilience to Sybil attacks.

A committee of Provisioners validates all submissions and select the candidate block with the highest score.

After the Selection phase, a small committee of Provisioners perform Block Reduction: a two step routine to gather Provisioners' signatures and assure convergence over a single block. If more signatures than a threshold of 75% of committee participants are collected, the candidate block is then established. The committee chosen for Block Reduction is always a small subset of the entire provisioner population, deterministically extracted through a non-interactive algorithm called "deterministic sortition". The non-interactive deterministic extraction algorithm additionally enables every node in the network to calculate who is in the committee from public parameters. This can be used to single out compromised participating Provisioners and decrease their reputation. 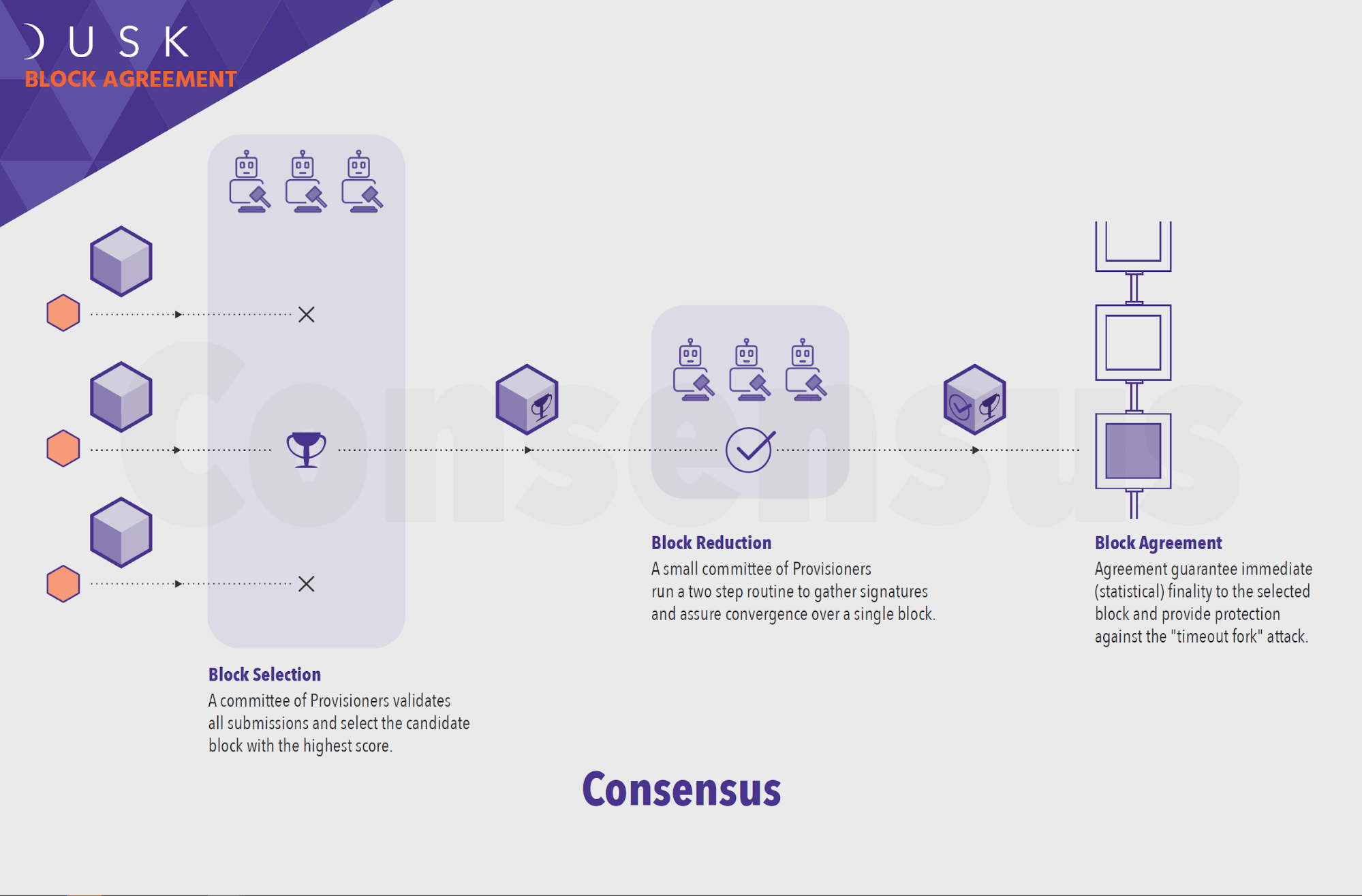 The Block Agreement is an additional phase designed to guarantee immediate finality to the selected block and provide protection against the "timeout fork" attack. During this phase, an additional committee gathers and verifies the signatures collected at the Reduction phase. This phase provides a statistical guarantee that at least one honest node has received a set of votes exceeding the minimum threshold required to successfully terminate the respective phase of the protocol.

As of July 2019, Dusk Network has used approximately 17.6% of TGE funds according to the allocations below:

The following chart represents the number and breakdown of all DUSK tokens that are to be released into circulation on a monthly basis.

Dusk Network aims to build the developer and end user communities by providing the proper documentation on code, academic research papers, package managers, tools and campaigns to drive adoption of the chain.

To date, the developer enablement programs have released multiple research documents and code documentation including a ZeroCaf Package, with additional SDKs forthcoming to promote a seamless developer experience both for current blockchain developers and cryptographers.

Finally, a combination of traditional media outlets is utilized, such as Twitter, Telegram, LinkedIn, monthly newsletters and blogs. These media are used to build general awareness around protocol development and provide key updates to the community. New channels are always added, such as Discord in Q2 2019.