Contentos is building a blockchain-based decentralized content ecosystem. The vision of Contentos is to build a "decentralized digital content community that allows content to be freely produced, distributed, rewarded, and traded, while protecting author rights". Contentos strives to incentivize content creation and global diversity and return the rights and value of content to users. Contentos aims to be a public content protocol that not only carries content and advertising value but is also a memory chain recording each user's contributions.

Since Contentos launched its testnet in March 2019, 4 dApps have been integrated to the Contentos Platform: PhotoGrid, COS2048, WalkCoin, and COS.TV.

Current statistics of all dApps running on Contentos can be found here.

PhotoGrid is a popular photo editing App with a community similar to that of Instagram. PhotoGrid is powered by Contentos testnet and actual COS tokens. PhotoGrid is available on both iOS and Android. 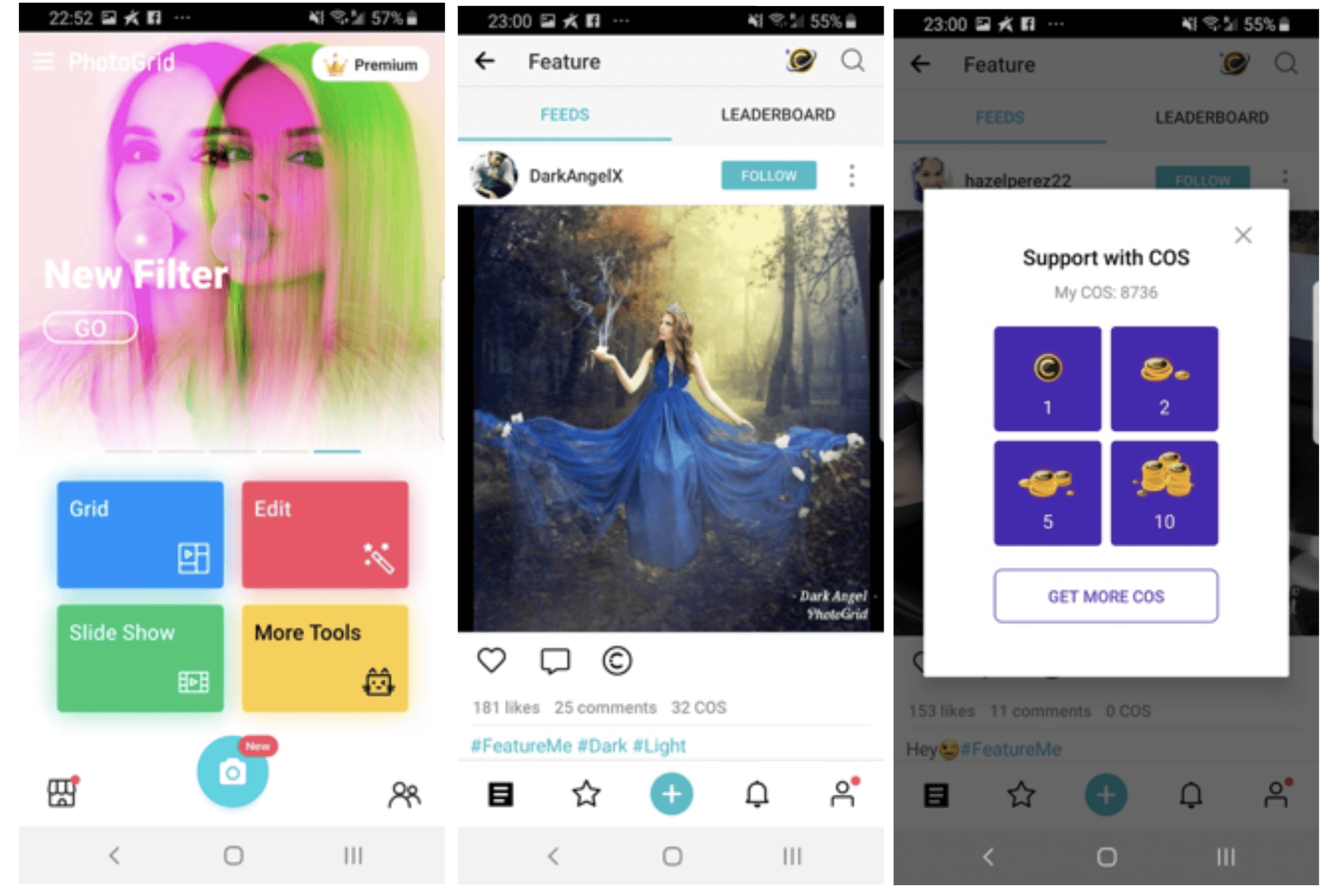 COS2048 is an Android game App derived from the original 2048 game. Users are able to earn COS through single-player games and use them as bet in double-player games. 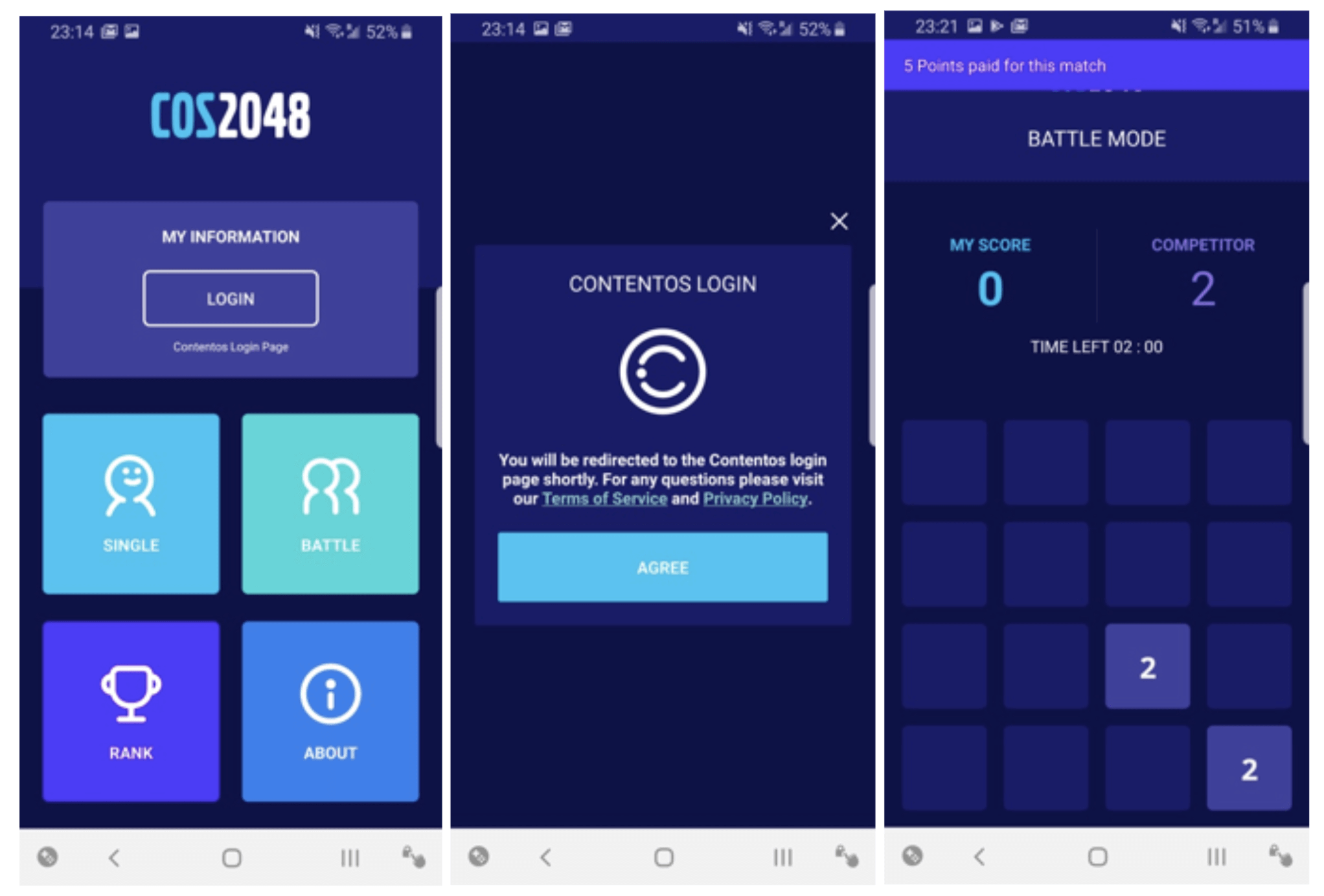 WalkCoin is an Android App that keeps track of users' walking record. WalkCoin issues Energy Coins (ENC) on Contentos testnet as an incentive to motivate users to achieve their exercise goals. Users can earn Energy Coins by completing walking tasks. 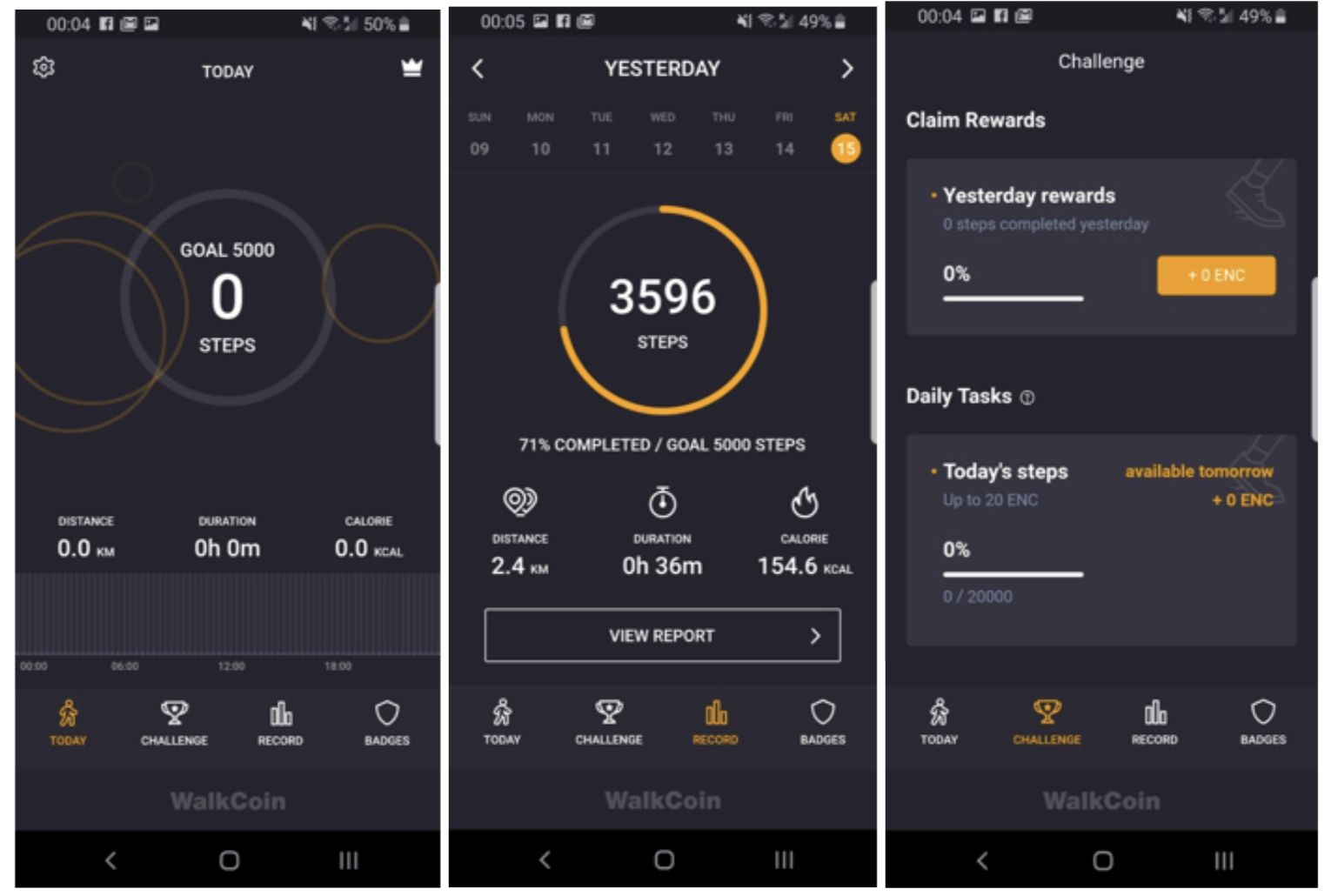 COS.TV shares project information and serves as a blockchain explorer. The platform is also a wallet for COS holders. Within the wallet, users are able to bind COS-enabled App accounts and withdraw COS to their BNB wallets. The website also displays selective video content and live streams from LiveMe. The interactions between users and content such as posts, likes and comments are recorded on the Contentos testnet. 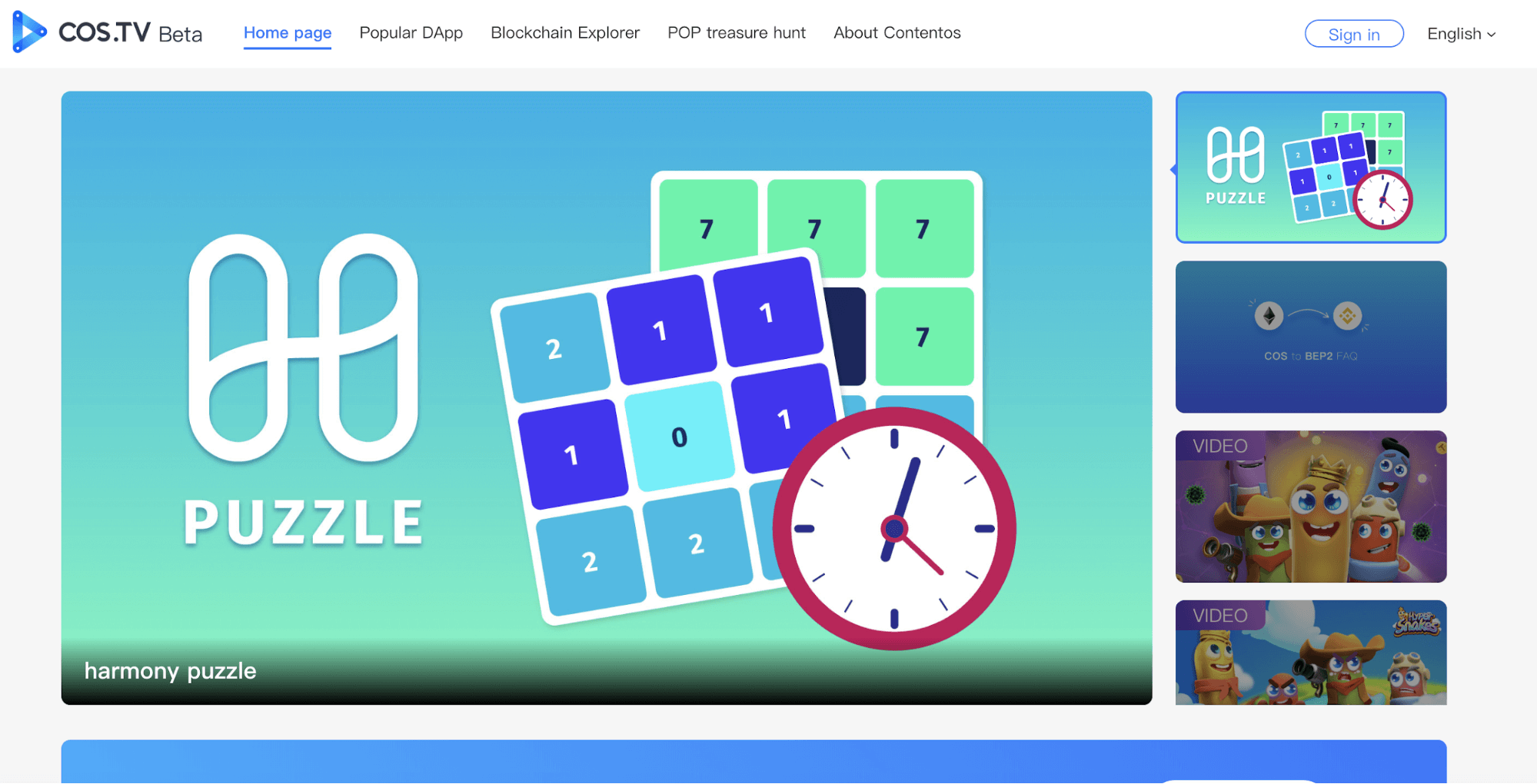 Every Contentos user has 2 IDs, one is her elliptic curve public key and the other is her unique account name. Account names are essentially readable aliases of public keys. All user properties such as IDs, balances and credits are grouped and maintained as on-chain account records that are freely accessible to the public.

Transactions and blocks must be signed by their originators. Contentos only accept transactions which have passed signature verification. The elliptic curve digital signature algorithm ensures everything on-chain is both unfraudable and undeniable.

Contentos Copyright Management is a system smart contract. Block producers can use the contract to elect a copyright moderator, who then has access by calling the contract to mark any content as genuine or pirated. Pirated content will be ignored by the reward distribution system and brings no benefits to their creators.

In practice, a copyright moderator is an account owned by a professional entity who has a strong ability on copyright authentication and are trusted by majority of block producers.

The Credibility Management contract is very similar to that of Copyright Management. Once a moderator is elected by block producers, she can then call the contract to set anyone's credit.

Contentos supports smart contracts in WebAssembly bytecodes. Any programming language can be used for contract development as long as its compiler supports WebAssembly. For maximum efficiency and convenience, the Contentos team recommends C++, and provides both a C++ SDK and an online IDE.

Developers can implement arbitrary logic in a contract since the programming language is Turing complete. Under the help of SDK, a contract also has access to rich on-chain data and permanent storage.

The following chart is a visualization of Contentos' technical architecture layers.

Contentos provides various kinds of contract templates and online contract generator with one-click deployment feature. The team notes that the Application Layer is still in its early stage of developmemt.

Below shows a high-level description of the saBFT Consensus. 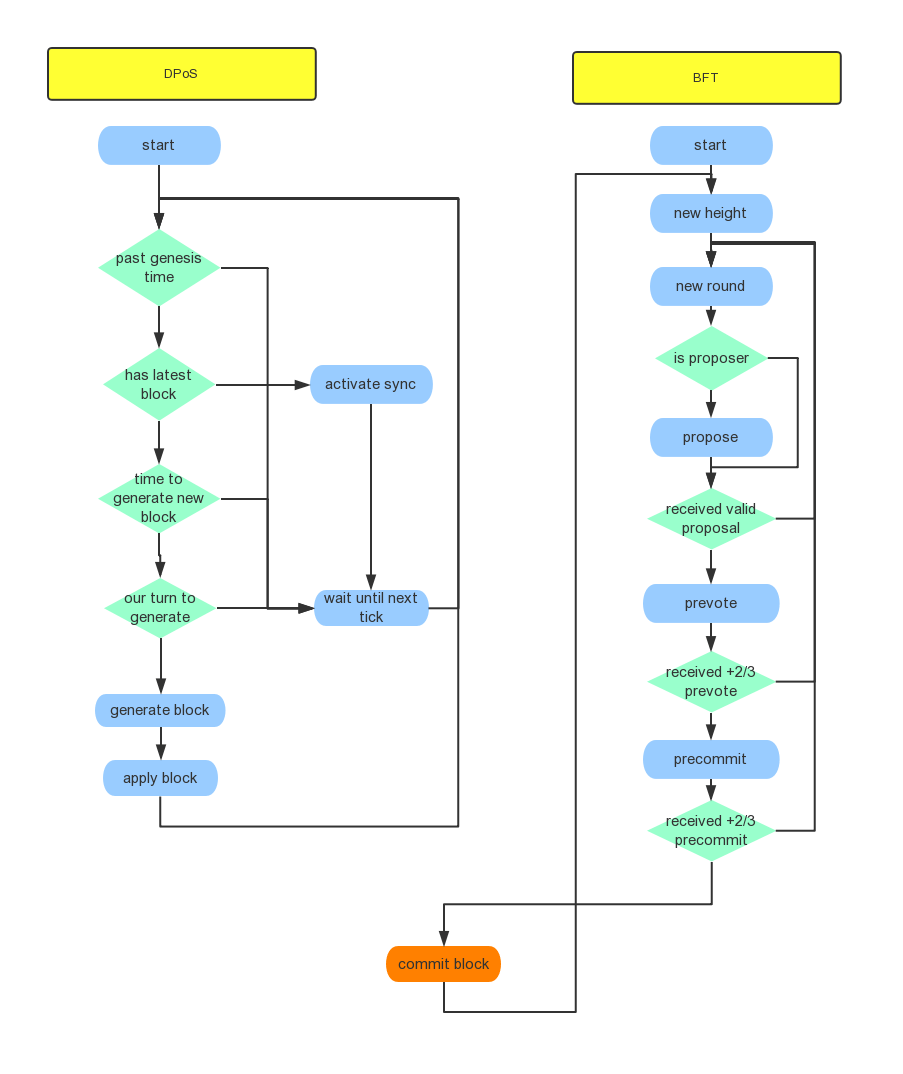 Contentos deploys a BFT+DPoS-based consensus protocol called saBFT ("self-adaptive Byzantine Fault Tolerance"). In saBFT, the BFT voting process is separated from the block-producing process. Unlike other BFT family protocols, the Contentos network runs BFT and block-producing asynchronously so that blocks can be committed in batches. This is aimed to overcome network jitters and achieve finality more quickly without compromising safety and liveness.

Block producers are elected in a standard DPoS way, i.e., users vote for candidates and the more tokens staked, the more voting power. Producers create new blocks in turns and are replaced by new producers periodically.

A Tendermint-like 3-step voting BFT process runs in parallel to mark the finality of blocks. Block producers are also BFT validators, who always propose their local head block and vote for blocks on their local chain. When a block is proposed and agreed by 2/3+ majority in 2 rounds of voting, it reaches finality. Block finality also helps a validator switch forks when she finds her head block and the finalized block branches off.

As of July 2019, the Contentos team has used 6.22 million USD, or 20% of its funds according to the allocations below:

The following chart represents the number and breakdown of all COS tokens that are to be released into circulation on a monthly basis. Note that the Ecosystem Reward will be fully distributed over a 12-year period.

3.3 COS token overview and use-cases

COS is the native utility token in the Contentos ecosystem. Its usage includes the following:

PhotoGrid was planned to be integrated onto the Contentos platform by Q3 2018. However, the PhotoGrid integration was delayed to Q4 2018 due to changes in PhotoGrid's development plan.

Contentos has been active in many blockchain and crypto related events. Upcoming events include ChinaJoy in Shanghai, and Taipei International Comics & Animation Festival in Taiwan.

Contentos hopes that the gradual release of tokens with reference to user growth will help to stabilize the price of tokens and grant appropriate rewards to early participants.

To attract more users to participate in the early stages of Contentos, 500 million tokens (i.e., 5% of the total supply) will be offered to the dApp developers recognized by the Foundation to design relevant functions and reward methods to encourage users to join the Contentos ecosystem.

These kick-start reward tokens are released yearly over 5 years.