An Operating System for DApps.April 13th 2020
Share this article

Cartesi is building an operating system for dApps. The project enables complex and intensive computations to run in a Linux environment, outside the blockchain, without compromising decentralization. Cartesi aims to make dApps significantly more powerful, cost-effective, easier to develop, and portable.

Cartesi aims to bring "mainstream scalability and convenience to developers and users of decentralized applications".

Development limitations on blockchain platforms can frustrate both developers and users, turning them away. Cartesi allows developers to build on well-established software they are familiar with, and running them in a Linux environment. The project aims to bridge the gap between the centralized and decentralized worlds of application development.

Currently, players willing to enter the Creepts decentralized tournament on Rinkeby need to overcome technical hurdles, such as downloading and configuring Cartesi Nodes and setting up Infura accounts. In 2020 Q2, Cartesi plans to release a remote service infrastructure that eliminates the barriers of entry for players, with remote Cartesi Nodes seamlessly accessible by the general public. With that, gamers will be able to play a decentralized blockchain game with the experience they are used to with Web 2.0.

The Cartesi Core is a layer-2 solution for moving intensive computations off-chain.

The Cartesi Machine enables developers to manipulate large amounts of data with computations that are several orders of magnitude faster than those executed directly as smart contracts. Moreover, developers can build on traditional software packages they are already familiar with.

From the point of view of the blockchain, a Cartesi Machine's entire state is represented by a single hash. Users commit their agreement to the initial state's hash, and post the final state's hash to the blockchain once the computation has been completed off-chain. The blockchain can then determine the honest claim between conflicting values for this hash. It can also verify assertions concerning the contents of the state, such as the result of the computation itself. dApp developers can then choose to punish dishonest claims, for example, by withholding collateral deposits in CTSI tokens.

In order for users to agree on the initial state of the machine, all associated data must be available to them. The vast majority of the state, such as the filesystems holding the dApp logic and static data, can be made publicly available before users have any stake in the dApp. However, not all data is known a priori. For instance, in the decentralized tournament infrastructure Cartesi released for Creepts in Q4 2019, the data concerning any given match is generated after stakes are set.

With Cartesi Roll-ups, which the team plans to release in 2021, Cartesi will introduce dynamic input/output capabilities to Cartesi Machines. DApps will have users accessing identical copies of a decentralized server entirely off-chain. Disputes over the state of a server will be securely and efficiently settled by the blockchain, so long as users' interactions with these servers are provably available during dispute resolution. These interactions will be too many and too frequent to be stored on the blockchain.

The Cartesi Side Chain, which the team plans to release in 2021 Q3, will solve the aforementioned data availability problem. DApps will be able to read and write data to the side chain with low latency and high bandwidth, and feed them as input/output to Cartesi Machines. 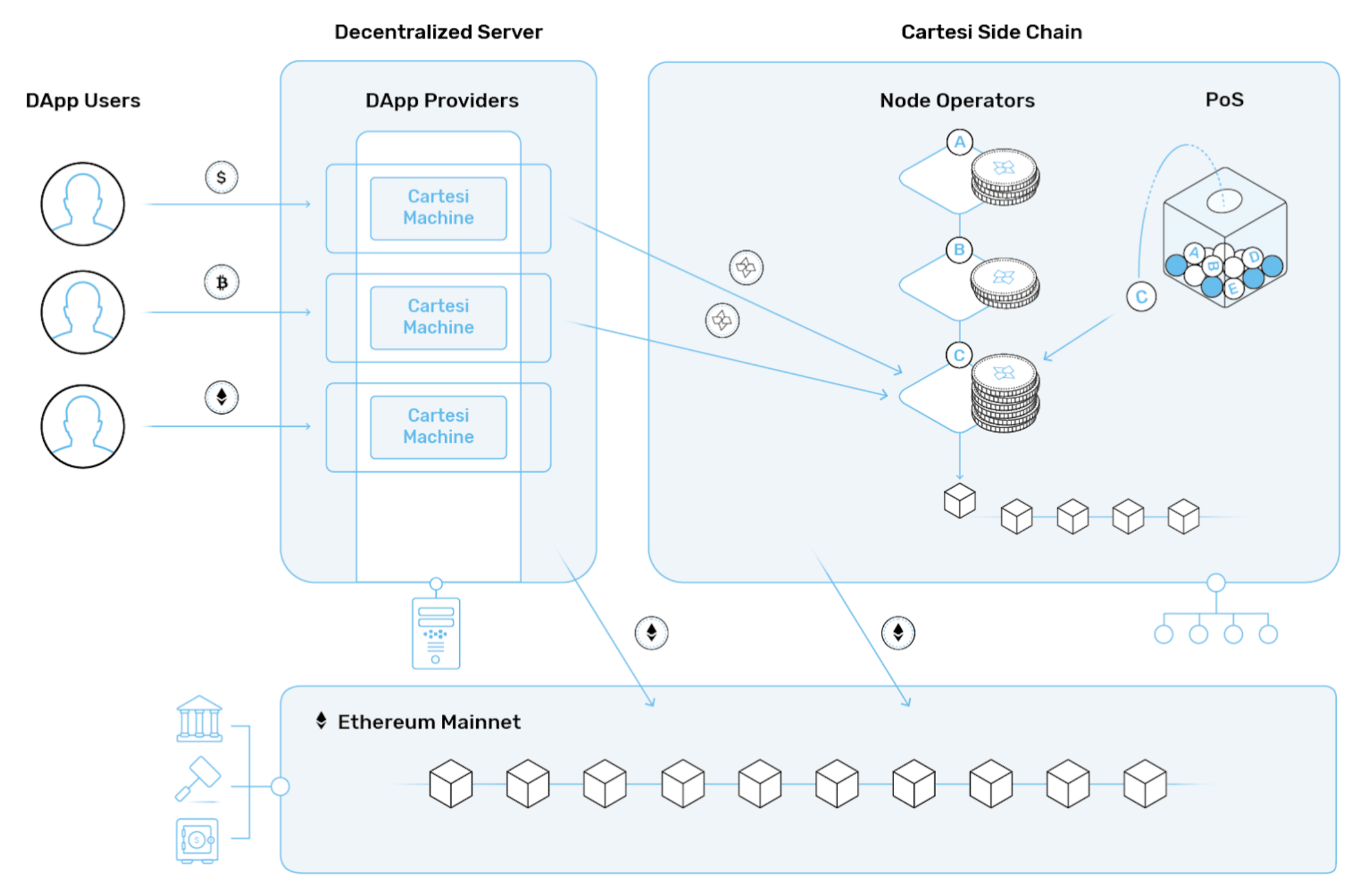 In addition to guaranteeing the honesty of claims over off-chain computations, CTSI will play a vital role in the Cartesi Side Chain. The Side Chain will be powered by a network of Node Operators, selected to produce new blocks by a Proof-of-Stake consensus algorithm.

Participation will be bootstrapped by a limited reserve of reward tokens and encouraged by a controlled inflationary process that awards newly minted tokens in proportion to staked tokens. The reserve awards and inflation will be progressively phased out, as fees paid by the users of side chain services to Node Operators provide all necessary incentives for participation in the staking process.

As of writing, Cartesi has spent 72% of the funds raised in seed and private sales since 2017.

The Cartesi team holds its funds in crypto, stablecoins, and fiat. Funds are stored with cold storage multi-signature wallets and USD bank accounts. Moving or using funds requires the approval of at least 3 out of the 5 executives of Cartesi.

The following chart represents the number and breakdown of all CTSI tokens that are to be released into circulation on a monthly basis. The Cartesi team plans to introduce token inflation for staking rewards in the future, which is yet to be finalized, and not presented in the following chart. Mining Reserve tokens will continue to be distributed after April 2024.

Cartesi aims to bring mainstream scalability and power to decentralized applications through a network of nodes. The CTSI token has been designed to incentivize Cartesi Node operators to engage with the system honestly and in an efficient way. It comprises the following use cases:

Cartesi will initially focus its community development efforts in China, Korea, Turkey, Russia, and Vietnam, and expand to other regions as the network grows.