Blockstack's mission is to enable a "fair and open internet that puts users in control of their data".

Blockstack makes building decentralized applications as easy as cloud applications. Developers use simple libraries that abstract away the blockchain complexity, and there is no new coding language to learn.

Users get a universal login that works everywhere without passwords, and an encrypted home drive that allows them to take their data to any app they want. Furthermore, these apps can run on user devices, and data sharing requires explicit user opt-in.

The Blockstack decentralized computing network aims to provide a friendly development environment for dApp developers, as well as universal IDs for users to easily use applications within the Blockstack ecosystem.

Stack (STX), the native token of the Blockstack network, is consumed when users register blockchain-based identities and solidify new business models and protocols that can be used across all 250+ Blockstack apps. Stack tokens will also be consumed when users and developers interact with Clarity smart contracts.

The use cases intended for STX tokens include but are not limited to:

There are currently 271 independent projects built on top of Blockstack. A complete list can be seen here.

The top 10 independent applications by number of installations are as follows. 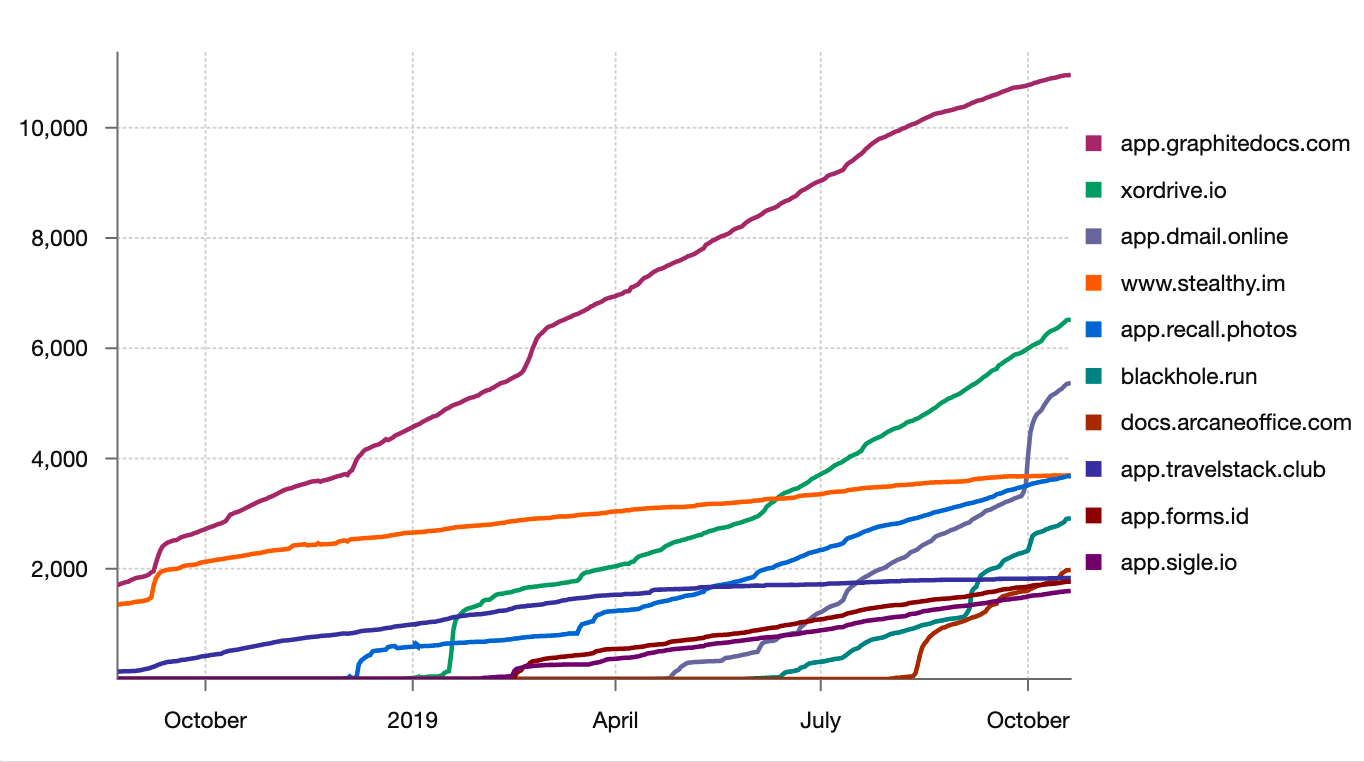 There are currently 155,669 names (identities) registered on top of Blockstack. 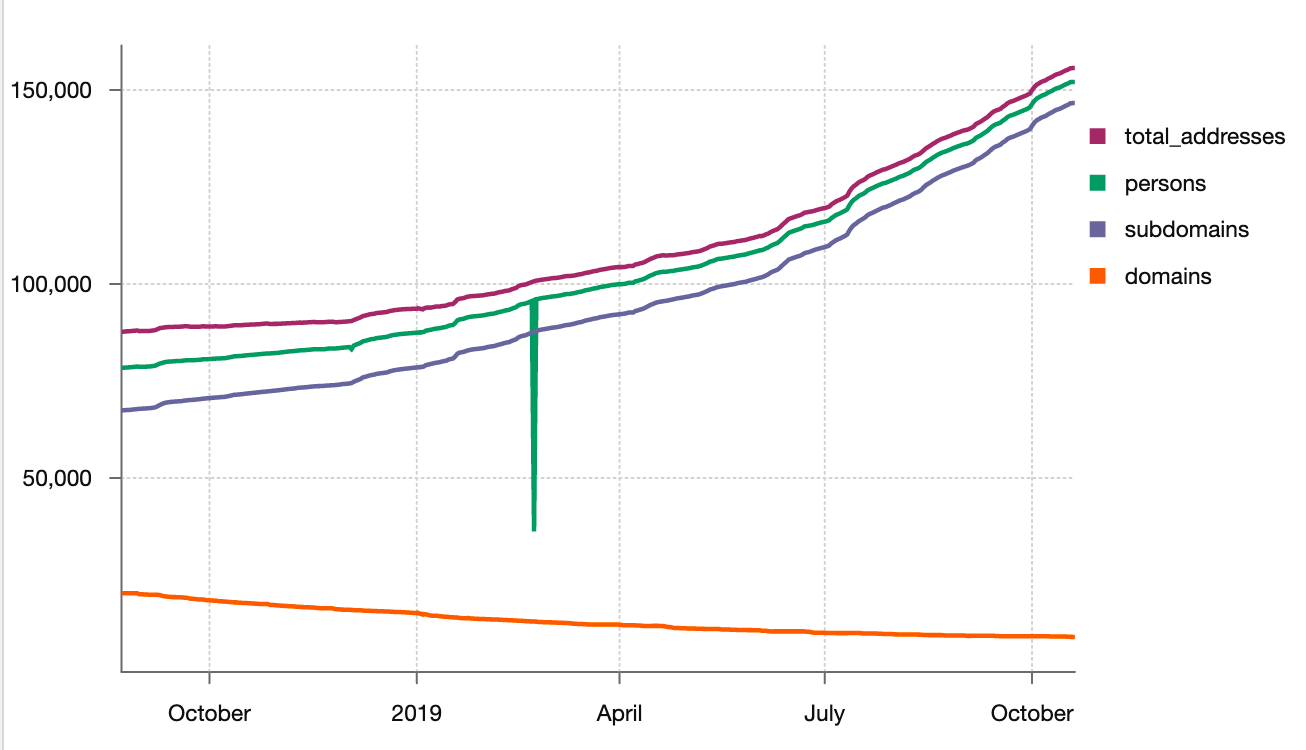 Blockstack uses a single-leader election protocol. To participate in the block race, each miner submits a "tunable proof" encoded as a transaction on an existing blockchain (the "burn chain") that provably destroys some of the burn chain currency, and encodes some proof-of-work score. The amount work and currency destroyed are used to calculate a probability distribution over the set of next blocks. The more currency destroyed and/or more work put into the block, the higher the chance a miner has of winning. Along with their tunable proof, each miner submits the hash of their block, and a verifiable random function ("VRF") output calculated over a shared plaintext (i.e., the result of the previous sortition).

The block winner is picked using cryptographic sortition. The VRF output from the last non-empty sortition is hashed with the sequence of burn chain block headers between its record on the burn chain and this new sortition, and the resulting hash is used to deterministically sample the block candidates with a probability proportional to their miners' tunable proof scores. The winning block is independently and deterministically calculated by all miners, and the hash used to sample it serves as the input to the VRF in the next sortition.

The Stacks blockchain tolerates forks in order to survive failed miners or invalid blocks. To do so, it selects the fork with the most non-empty cryptographic sortitions. This ensures that the chain with the most time spent working on it is the longest chain. 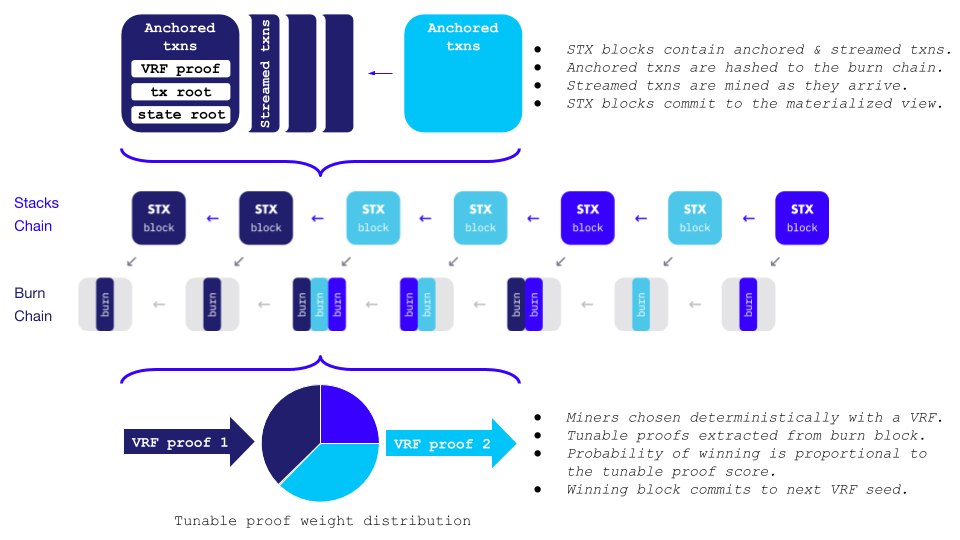 3.2 Token governance and use of funds

Blockstack's cryptocurrency holdings are held in cold-storage with a multi-signature private key set up aside from small reserves for operational purposes. Any transfer of cryptocurrency requires the use of at least two private keys that are separately controlled and secured by executive officers or directors of Blockstack PBC.

A similar policy is in place with respect to Blockstack's holdings of 110 million Stacks Tokens in its own treasury. A single executive officer or director is unable, on his or her own, to transfer any of Blockstack's cryptocurrency. Blockstack may also introduce a cold-storage setup where a subset of private keys is kept with a third-party custodial service. Blockstack has policies and procedures in place in case of death or disability on the part of one or more of these executive officers and directors that vest control of the private keys in Blockstack PBC's Board of Directors, including the safekeeping of a backup private key.

As of October 2019, Blockstack has raised an additional $23MM in their 2019 token offering and plans to use those proceeds in the allocations below:

The following chart represents the number and breakdown of all STX that are to be released into circulation on a monthly basis. The Mining Tokens will continue to be released until August 2051.

Blockstack has generated strong developer adoption, especially in the US, Canadian, and European markets. To date there are over 250 independent applications built on top of Blockstack, serving a variety of use cases.

Blockstack has attracted its developer community through a combination of providing easy to understand education and tools, specific contests and events, and ongoing incentivization.

The next phase of community growth will focus on pulling in end users, with a stated goal of hitting 1 million users total on the network in Q1 2020. This will be facilitated by Blockstack's partnership with Blockchain.com, as well as upcoming initiatives to be announced before the end of Q4 2019.

The full Regulation A Offering Circular, with exhaustive information on Blockstack, can be found here.