Its team believes that cloud computing is the future, and instead of being monopolized by tech giants like Amazon AWS, Google Microsoft Azure and Alibaba Cloud, it should be affordable for everyone.

Ankr is building a marketplace for container based cloud services using shared resources. Ankr will provide developers and enterprise clients with the ability to deploy 100+ types of blockchain nodes.

Ankr aims to provide a pragmatic business solution, where node operators can utilize idle cloud resources from high-specification data centers to run a variety of services, such as running blockchain nodes, while data center owners monetize their idle resources through the Ankr cloud platform.

Ankr holds its fiat funds in USD, in a bank account that requires the approval of two of the co-founders for outgoing payments.

The following chart represents the number and breakdown of all ANKR tokens that are to be released into circulation on a monthly basis.

The Ankr token is the main method of payment on the Ankr Cloud platform. Node operators can pay node hosting fees with Ankr tokens through the built-in wallets for Ankr ERC-20 and Ankr Native tokens. Payments are handled by a Tendermint-based smart contract which releases tokens from the wallet proportionally and warns the user when the wallet is about to be depleted. Crypto native enterprise customers of the Ankr cloud can also pay for their hosting fees in Ankr tokens. Examples of such enterprises are cryptocurrency exchanges, staking platforms, investment funds and custody providers. . Ankr tokens can also be used for donations to nonprofit cloud computing organizations, for example BOINC. At last, Ankr tokens can be used for other payments which are compatible with Ethereum or Binance BEP. Other uses of the ANKR token include:

Ankr is a cloud computation platform that aims to provide prices which are more affordable than traditional data centers or public cloud providers like Microsoft Azure and Amazon AWS.

The first active use case is created to facilitate consumers to deploy any blockchain node in just a few easy clicks. Running nodes can serve staking or developing purposes.

The screenshots below show the different functionalities of the Ankr Cloud platform.

In the dashboard users can see all their deployed nodes and information about new features and campaigns. 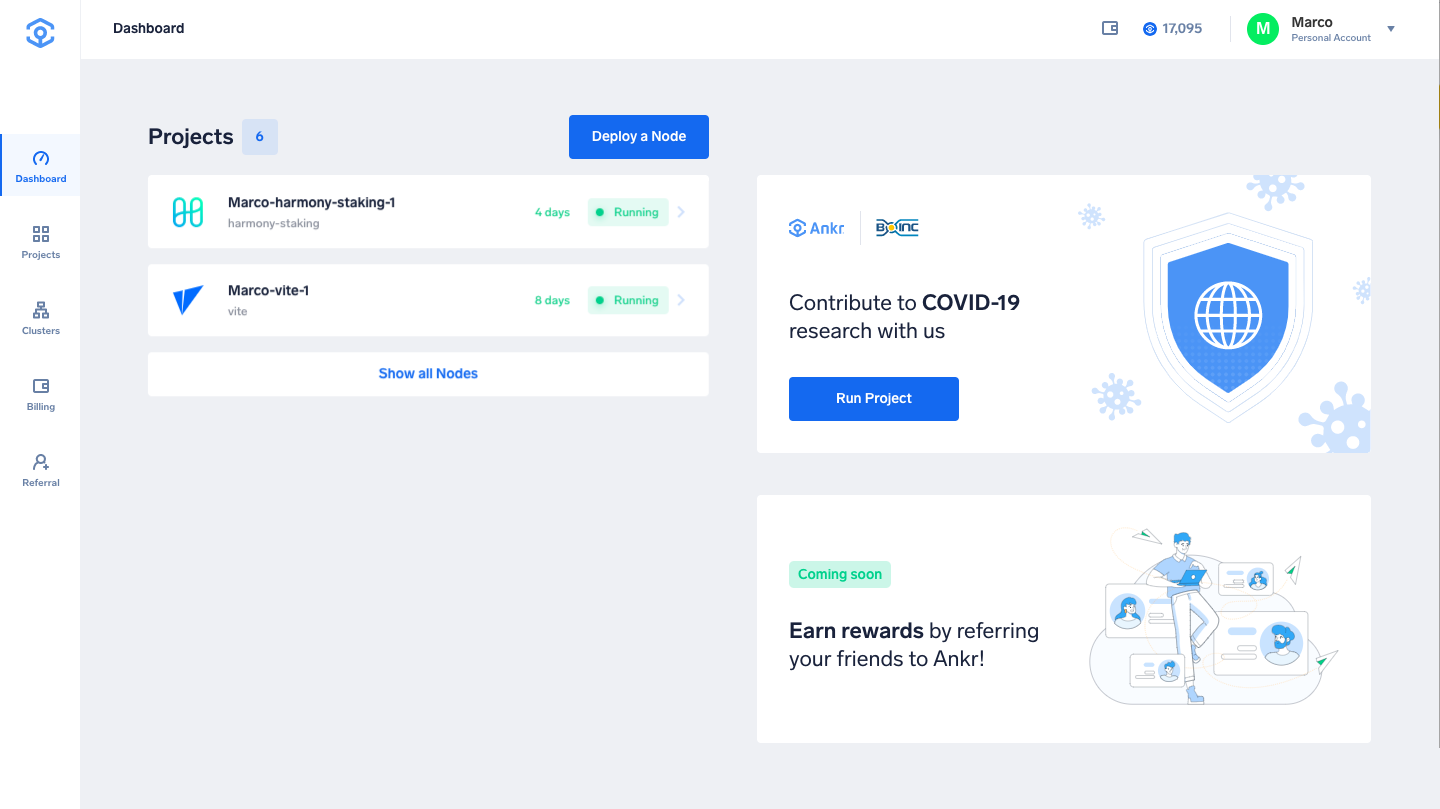 The node market shows an overview of all available blockchain protocols and nodes. Users can choose out of a variety of node types to deploy.

The Clusters overview presents the user with all available data centers around the globe which provide their idle compute resources to host the nodes. 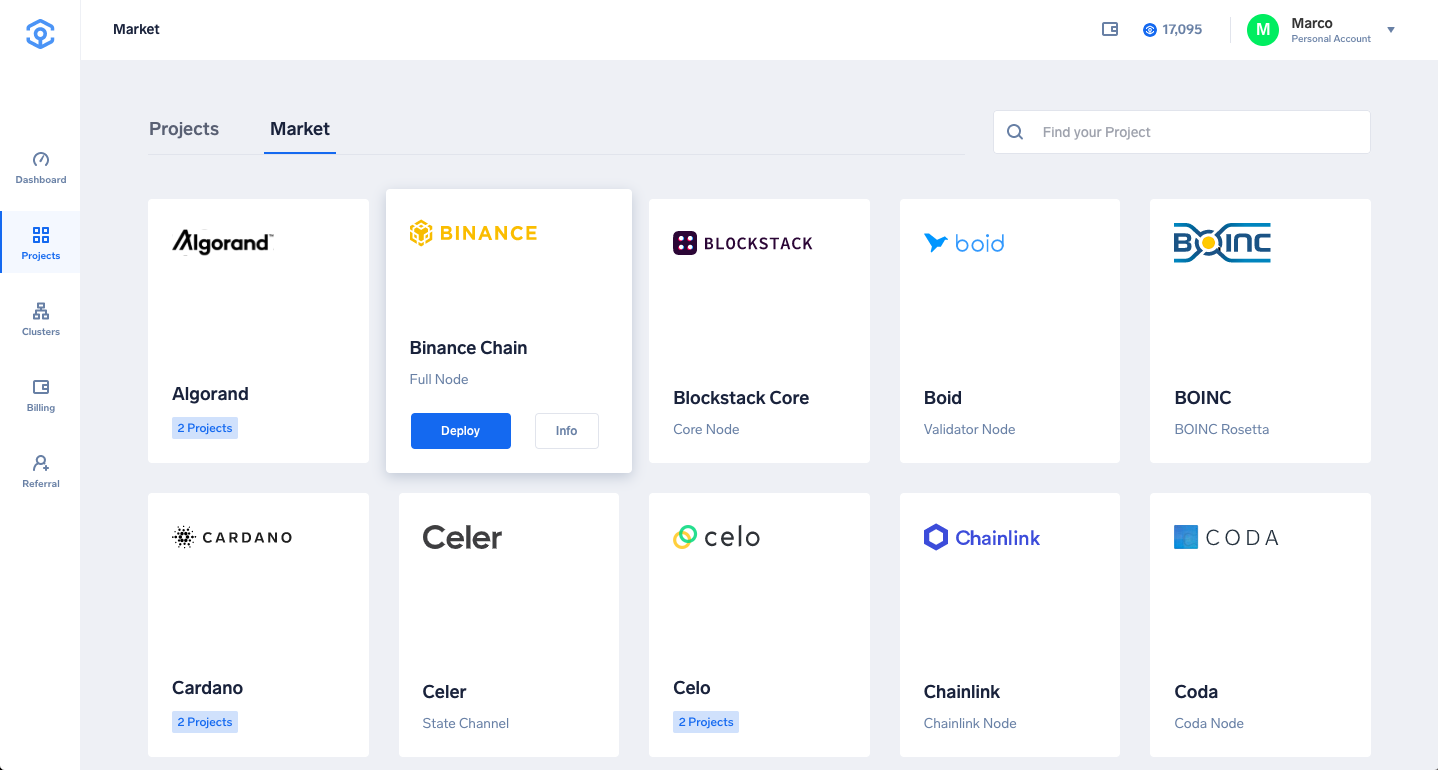 On the billing page, users can find their billing history and payment specifications. 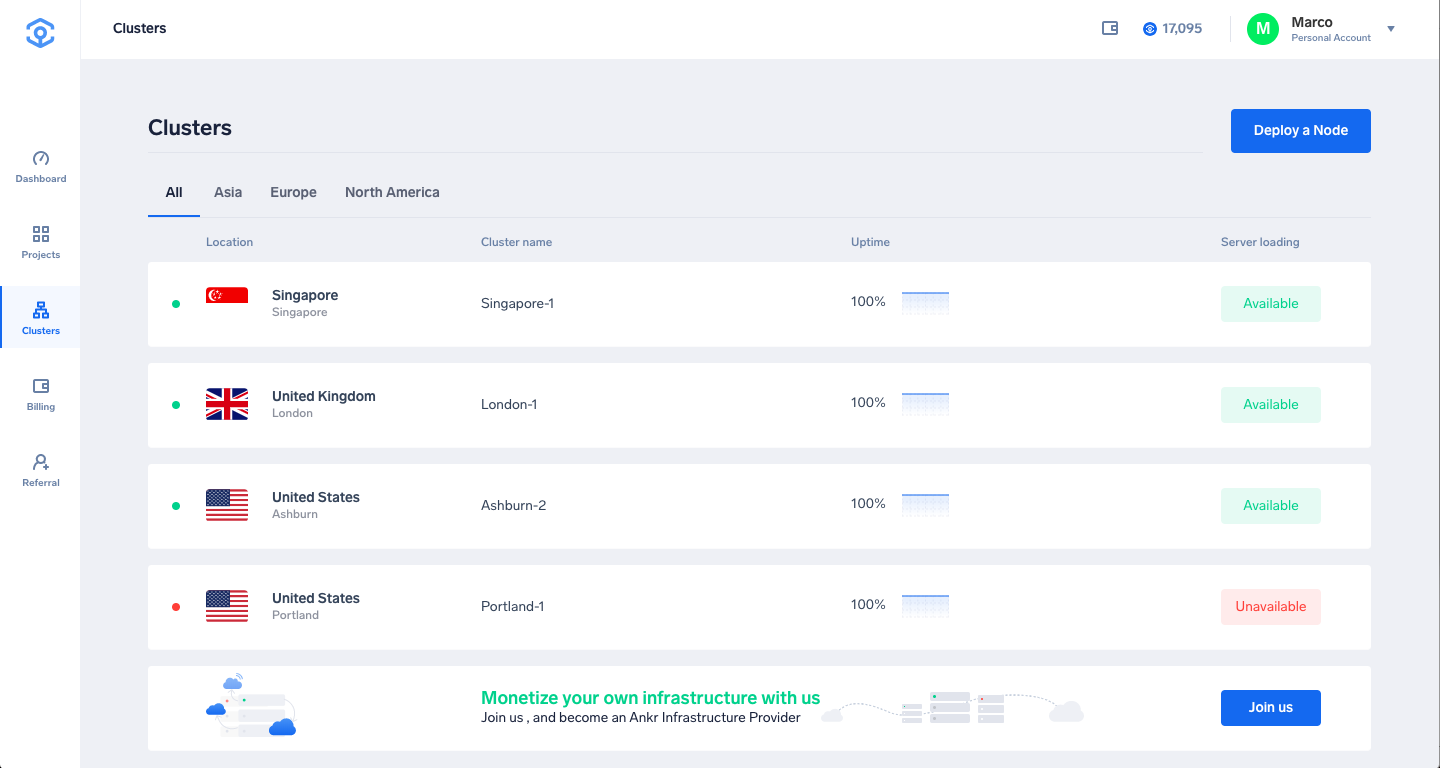 In the Ankr node market, users can choose from a wide variety of blockchain protocols and node types. To provide the very best user experience, Ankr has a strong focus on the UX and UI side of the cloud platform as well as the individual node deployment applications. This is an example of the user experience of deploying a Binance Chain node. 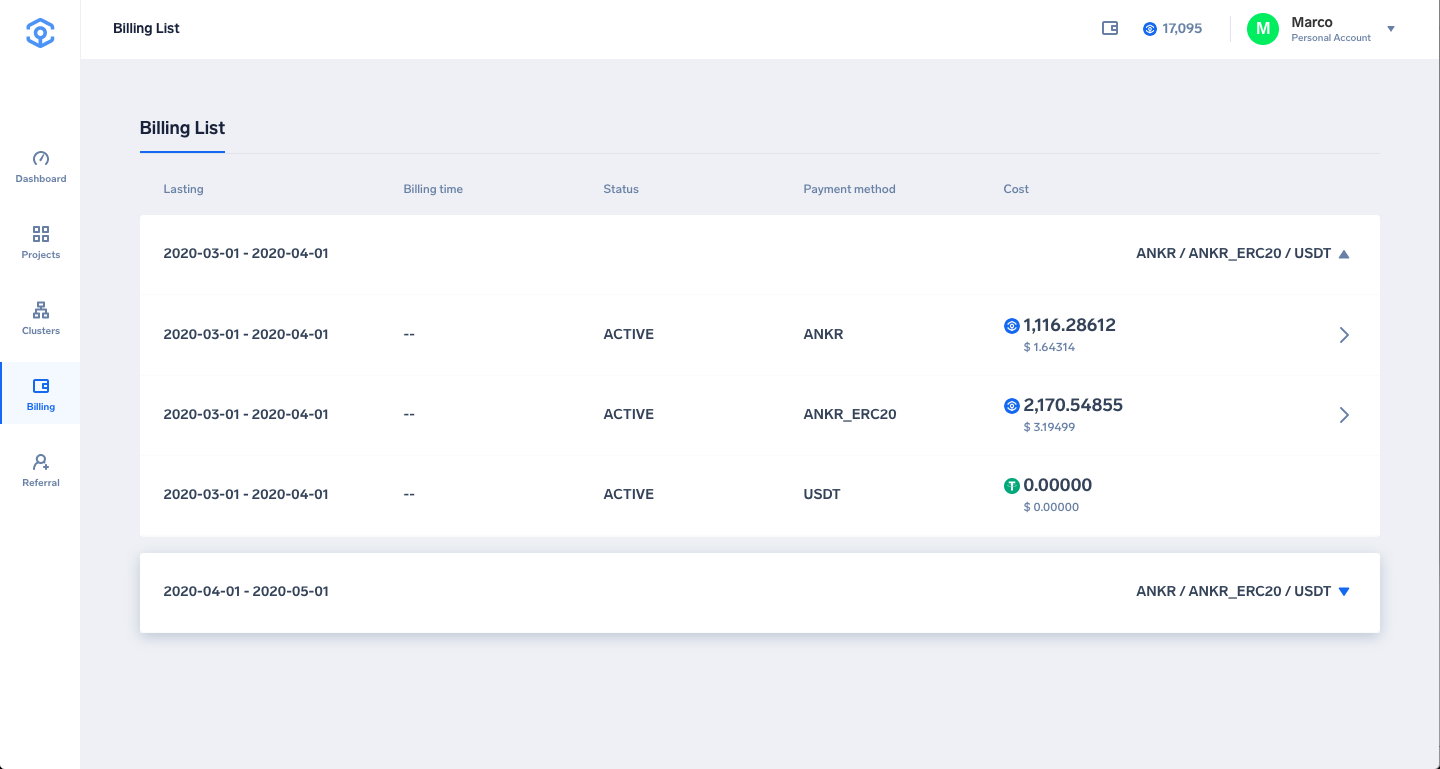 Payments are facilitated fast and easy with Ankr tokens or other cryptocurrency such as USDT.

The Ankr DCCN system is deployed and distributed over the computing resources managed by Kubernetes across various geographic locations. Resources configured into clusters in Kubernetes are connected to each other via a specialized type of clusters called Ankr Hub. Hubs at this time are fully set up and controlled by Ankr and serve as key nodes to relay and dispatch the computing tasks to other working clusters. The working clusters are the units actually running users' computing jobs.

Ankr aims to create a user experience on DCCN similar to that of centralized computation platforms such as AWS or Azure. Through Ankr's GUI or CLI, users can easily configure and deploy infrastructure, services, or applications. 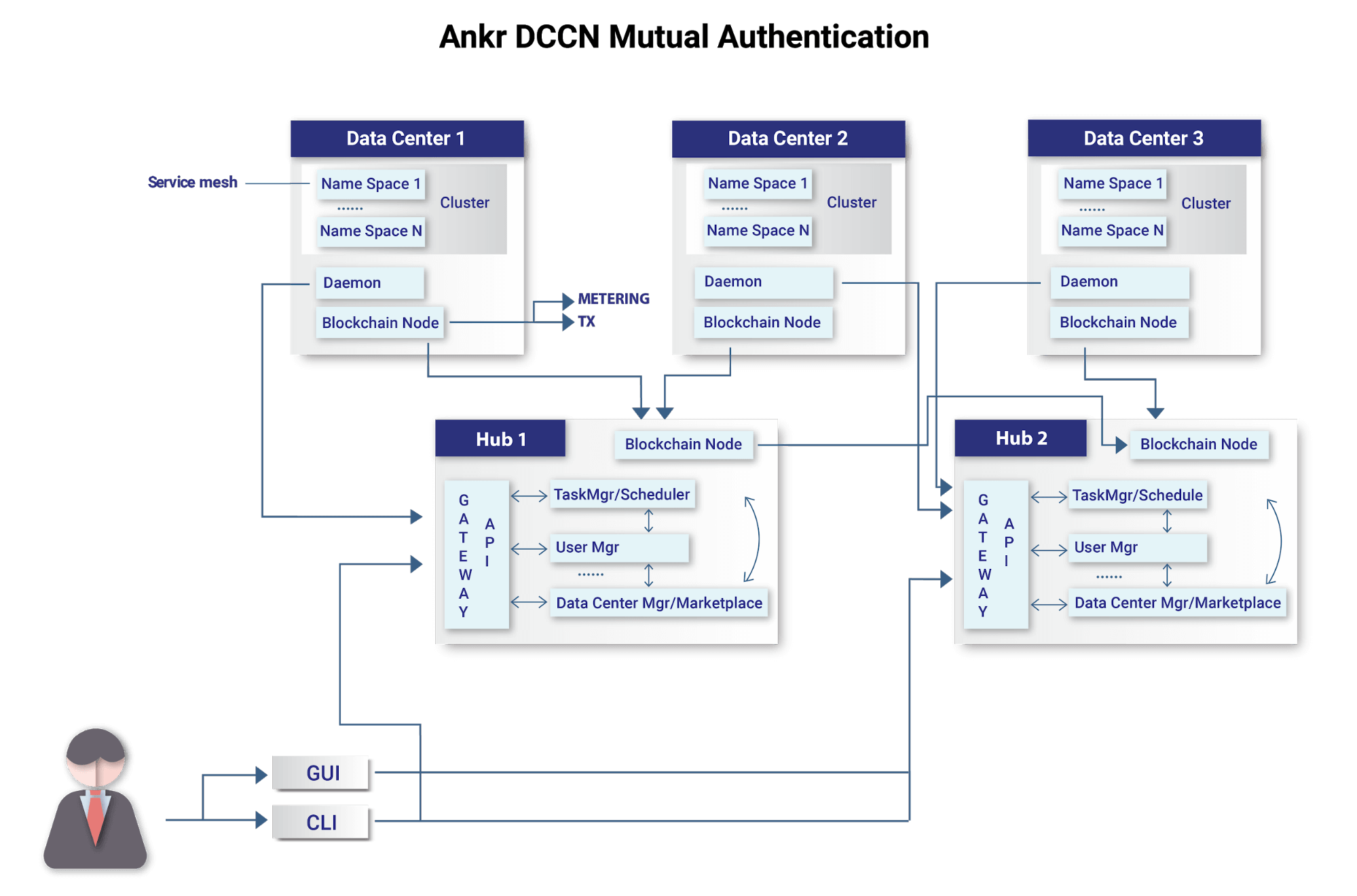 The core task of a Resource Scheduler is to select and assign tasks to nodes for user applications. These nodes will then run in the desired states.

In a multi-node, multi-user, and multi-task scheduling environment, a Weighted Dominant Resource Fairness Algorithm ("WDRF") evenly distributes the available resources of each node to each task based on resource availability and where services are most needed.

The goal of the Ankr blockchain is to provide payment and metering kinds of services for Ankr cloud service, rather than provide services for dApps of customers.

Each data center or mining machine will be a node for the network. As of writing, the team claims the network can support about 1,000 TPS, with each node supporting 900 connections. Both send rate and receive rate are 5 MB. The transaction fee currently is fixed at 5 ANKR tokens. Maximum blocksize is at 22 MB. The Ankr blockchain does not use hash puzzle, and therefore has no hashrate. The block period is about 1 second for blocks containing transactions. If there is no transaction being proposed in 15 seconds, the network will be forced to create an empty block.

In Ankr there are three types of nodes, including:

Since the mining equipment is also used for resource sharing and calculation, the graphics card mining machines with CPU, disk, and memory are selected to deploy.

With the ever-growing development of 5G technology, the modern network has much higher bandwidth and much lower latency. This allows for the implementation of a variety of real-time coordination applications using Ankr Miner, such as IoT, machine learning, distributed storage systems, and VR/AR. 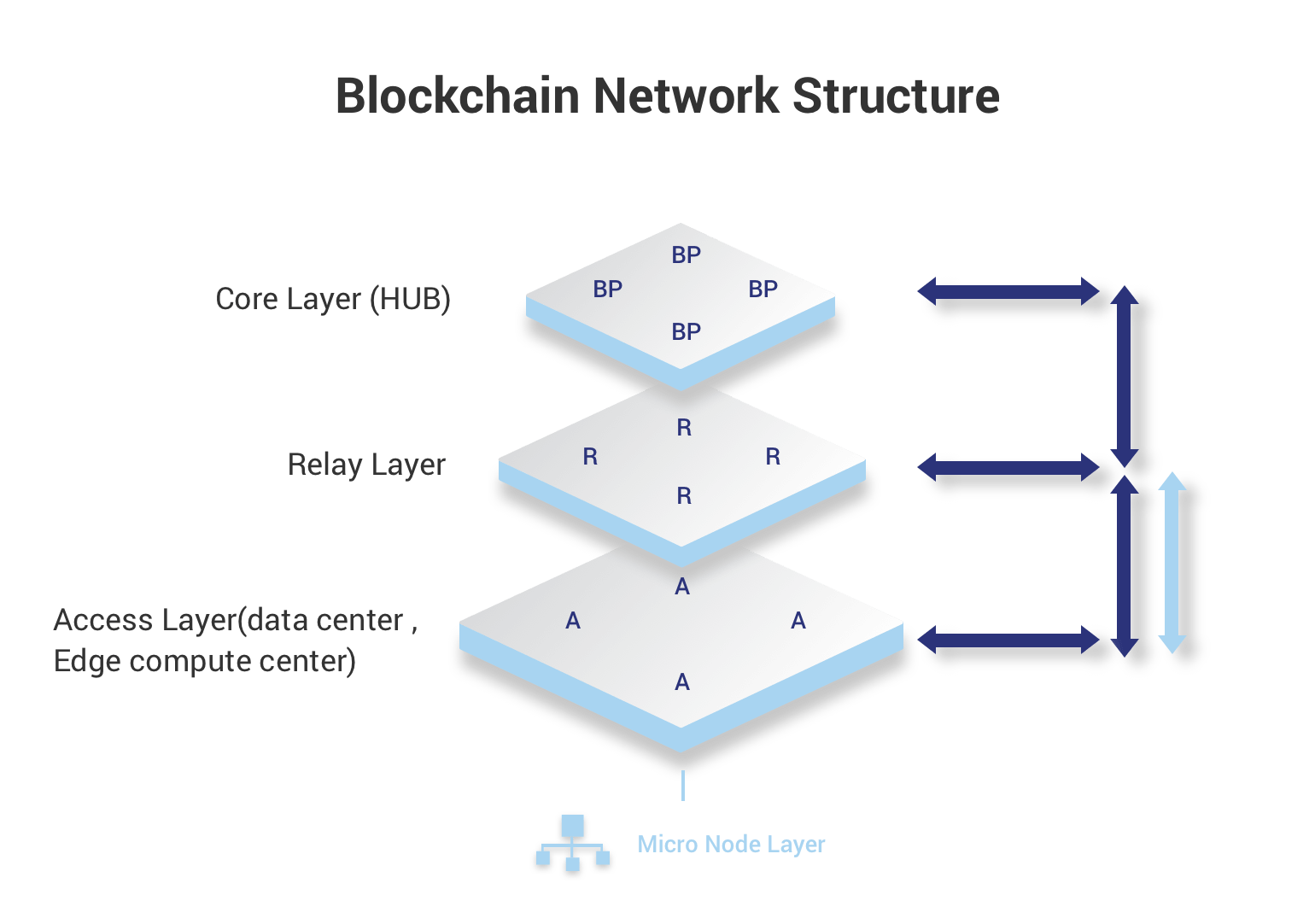 The provider of the network, the computation, and the store will provide proof periodically to the access layer. The access layer will then verify the proof, and the result will be passed to the core layer. If the proofs are verified, the resource provider's service level will be increased, which in turn increases the probability that the provider will be elected as a BP node.

Using the supernetting technology, Ankr's blockchain network can aggregate idle networks and provide more bandwidth. To do this, a supernetwork IP is formed by routing two or more networks into a larger network. The new routing prefix for the combined network represents each constituent network as a single routing table entry.

The node can retrieve physical neighbor nodes, allowing packets to be transmitted faster and more nodes to join the Ankr blockchain network.

For verification, the consensus has three phrases:

Ankr's blockchain consensus sequence can be visualized in the following diagram. 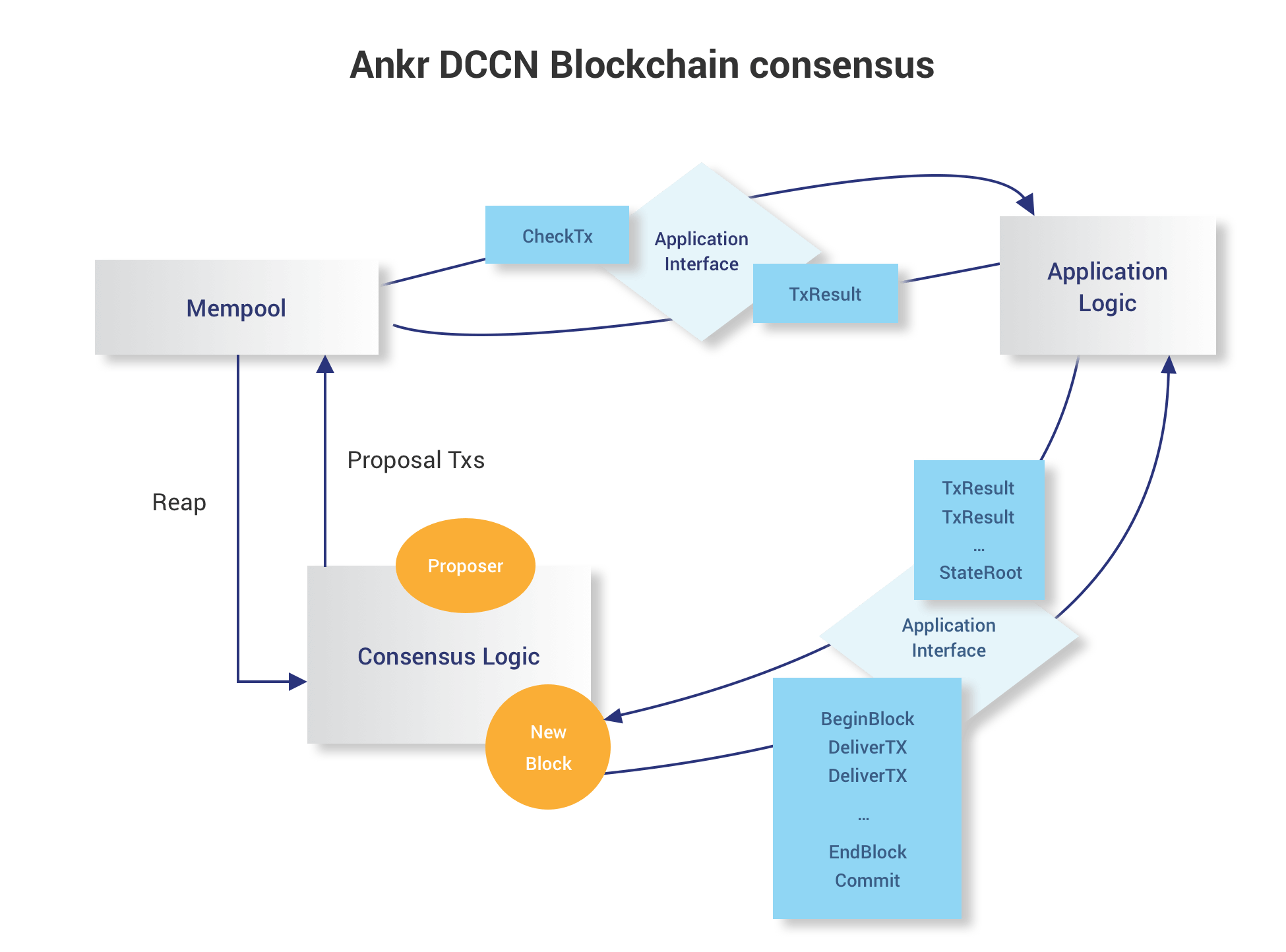 The difference between SLSBFT consensus and standard BFT is the Block Producer ("BP") node election. BP node election is based on service level and stake, so that not only large token holders, but also nodes who contribute positively to the conmutational power of the platform, can become Block Producers.

The user's service level is calculated by the DCCN resource provider's Quality of Service ("QOS") and the resource consumer's credit. The first step for all satisfied account nodes is to become a candidate node.

The diagram below is a visualization of how smart contracts work in Ankr's blockchain. 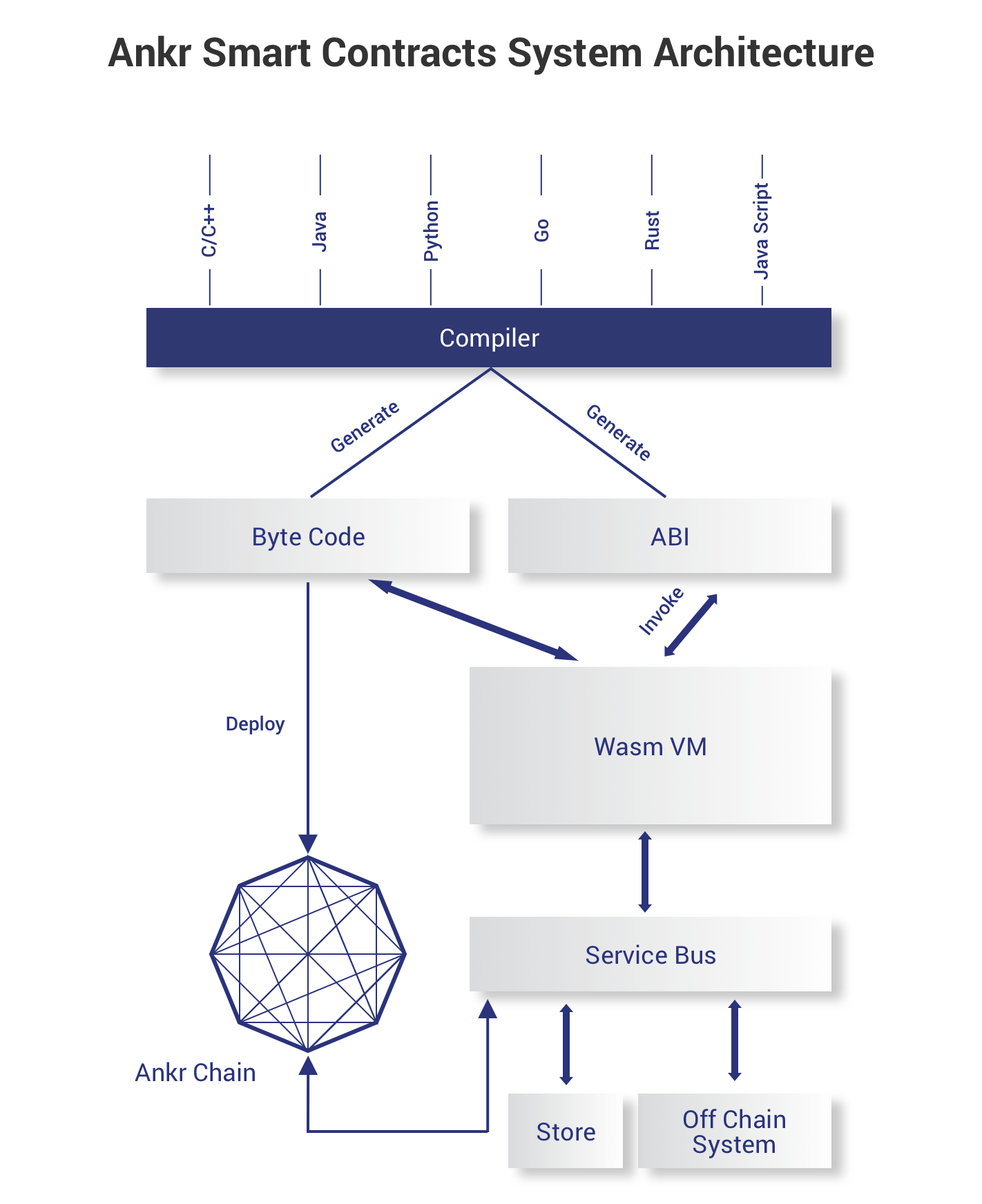 Ankr's smart contract system is characterized by the following traits:

In order to promote the healthy development of the Ankr cloud computing platform and to provide customers with high-quality services, an incentive mechanism is provided to all relevant participants in the ecosystem.

Rewards for participants are calculated with several factors, including:

For example, an application end user chooses to use the resources of a data center provider. The reward for both parties will computed by using the formula mentioned in the white paper. Stakeholding, consumption, resources and services provision, and reputation are part of the formula. 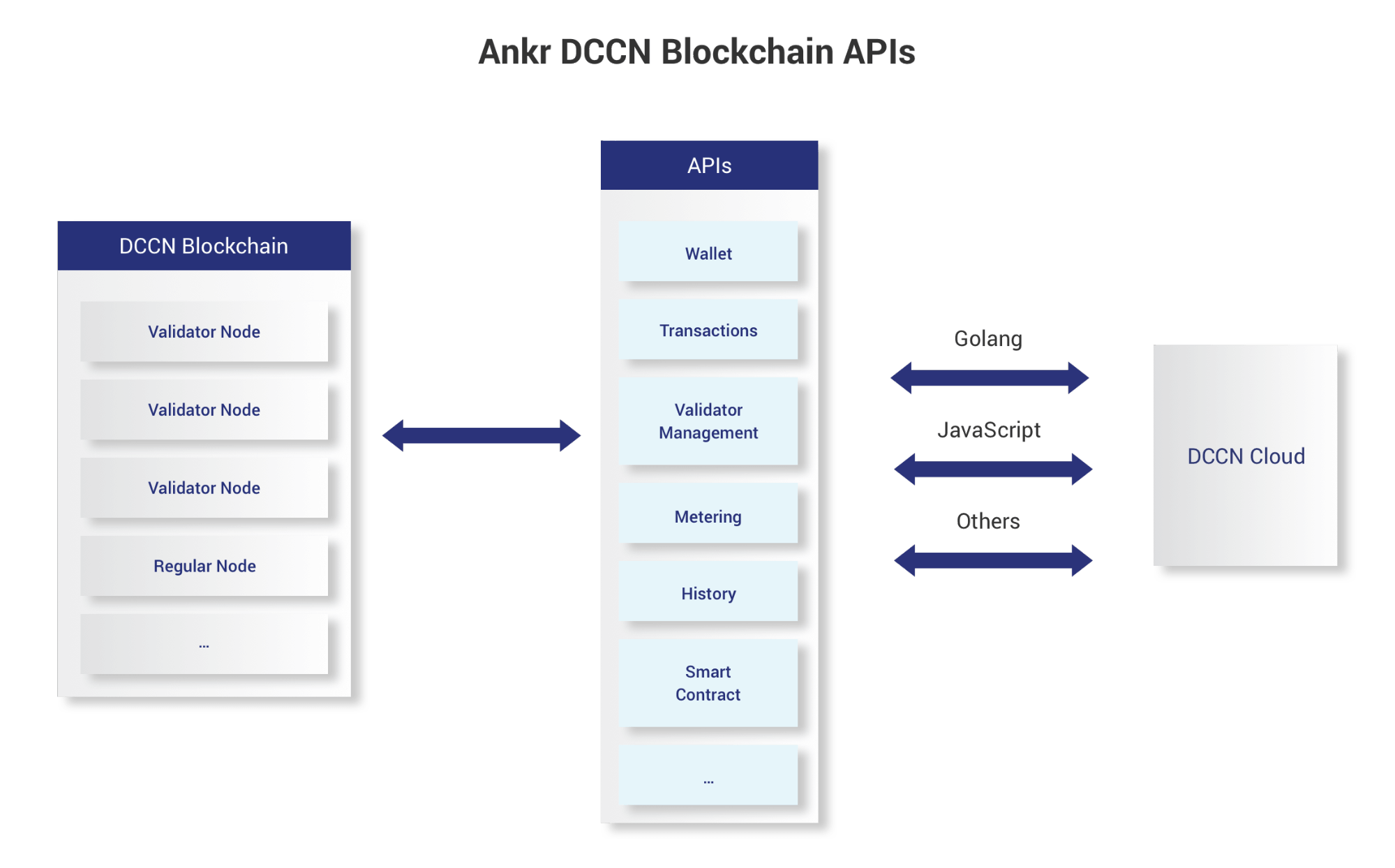