Its value proposition is centered around two elements:

ALGO is the currency of the Algorand Protocol and serves as the medium of exchange and store of value. The currency serves as the representation of Proof of Stake that facilitates consensus to validate and confirm new transactions.

Consensus requires three steps to propose, confirm and write the block to the blockchain. These steps are: 1. propose, 2. soft vote and 3. certify vote. Each is described below, assuming the ideal case when there are no malicious nodes and the network is not partitioned (i.e., none of the network is down due to technical issues or from DOS attacks). Note that all messages are cryptographically signed and authenticated with the VRF in these steps. 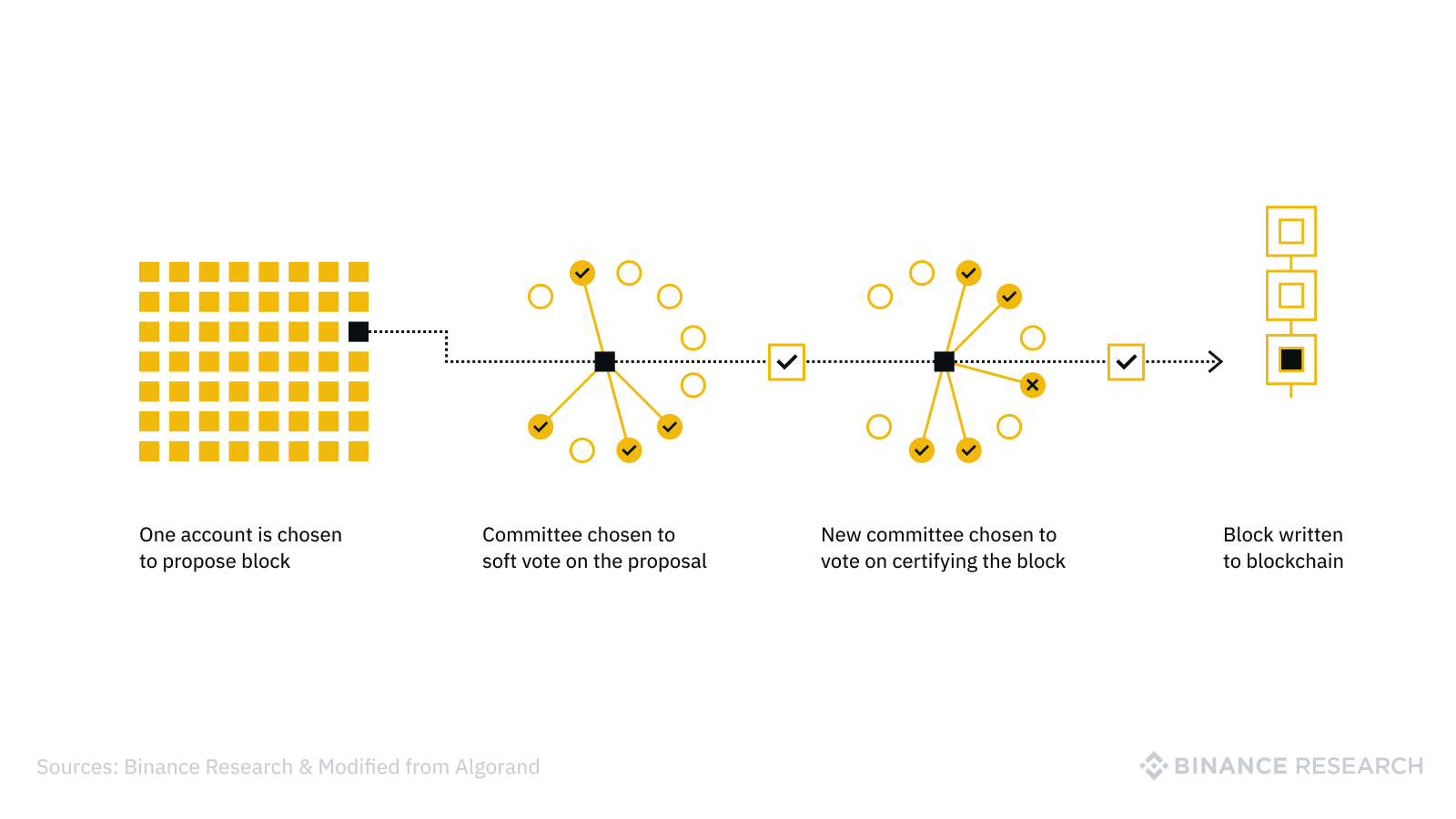 In the block proposal phase, accounts are selected to propose new blocks to the network. This phase starts with every node in the network looping through each of the accounts that it manages, and for each account that is online and participating, running Algorand's VRF to determine if the account is selected to propose the block. The VRF acts similar to a weighted lottery where the number of Algos that the account has participating online affects the account's chance of being selected. Once an account is selected by the VRF, the node propagates the proposed block along with the VRF output, which proves that the account is a valid proposer. Algorand then moves from the propose step to the soft vote step. 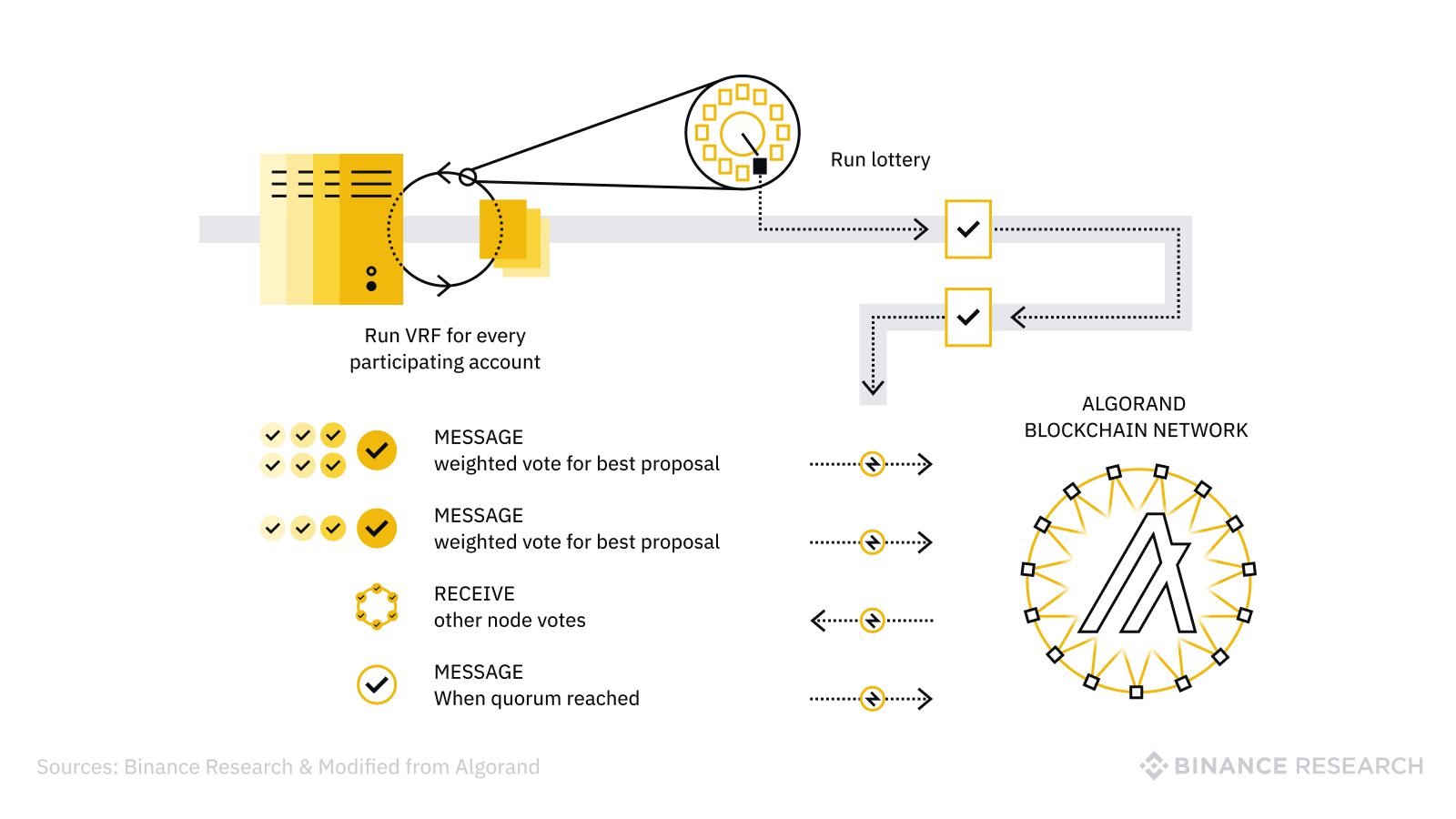 The purpose of this phase is to filter the number of proposals down to one, guaranteeing that only one Block gets certified. Each node in the network will get many proposal messages from other nodes. Each node will validate the VRF proof of these messages. 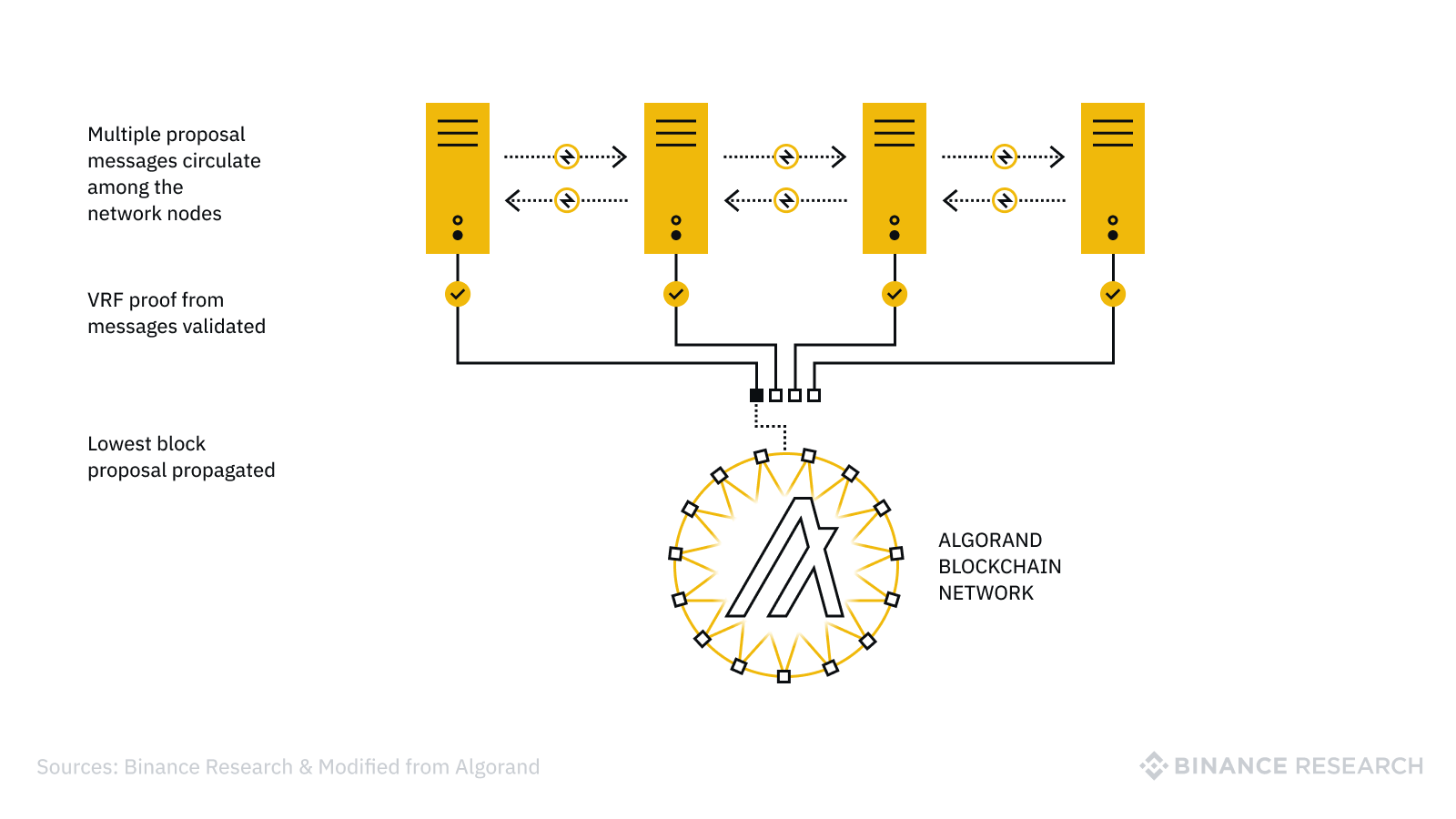 A new committee checks the block proposal that was voted on in the Soft Vote stage for overspending, double-spending, or any other problems. If valid, the new committee votes again to certify the block. 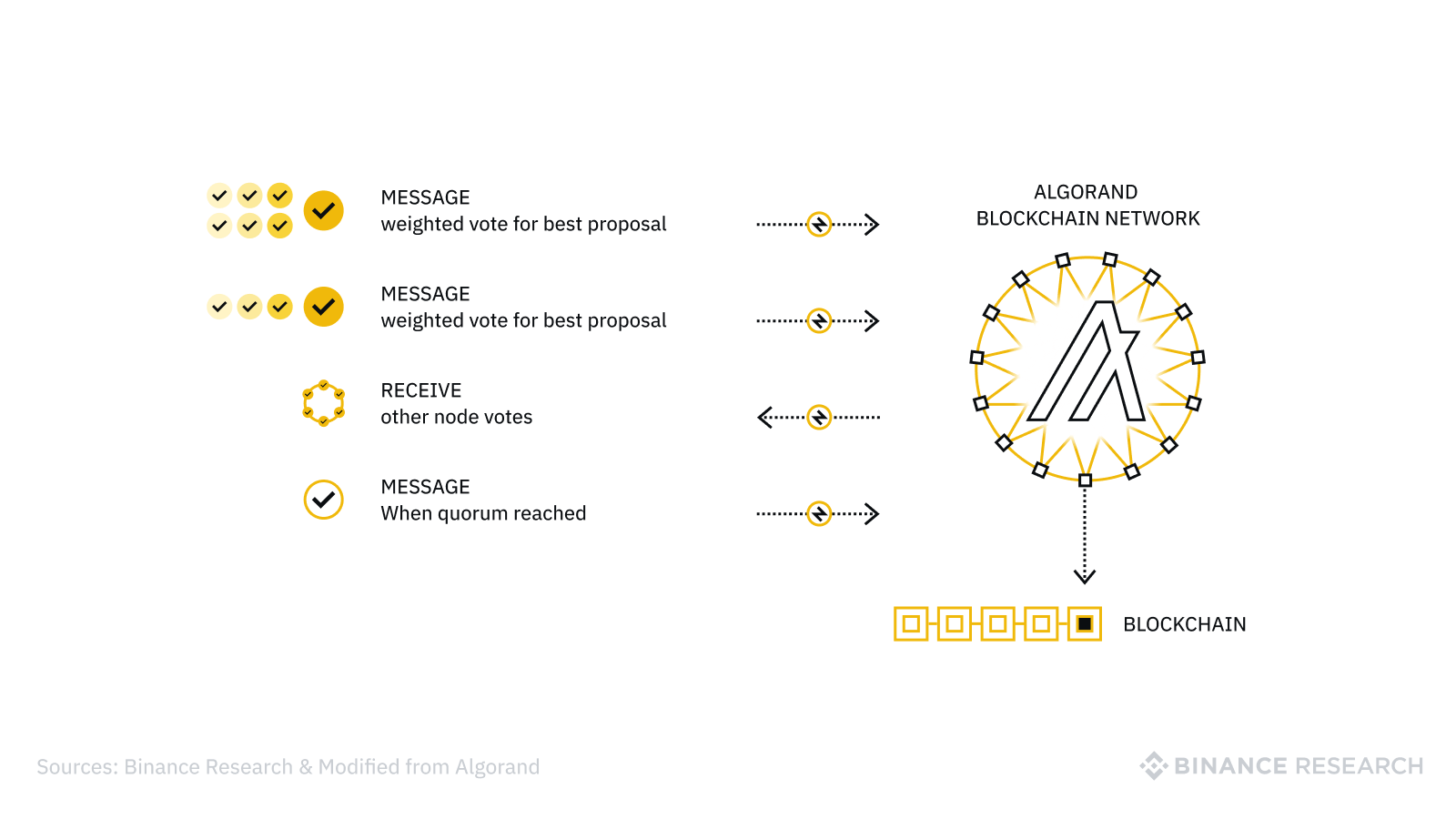 Every block in Algorand reveals a new random and unpredictable selection seed that determines which users should participate in the next round of the consensus protocol.

When a new block gets committed to the blockchain, everyone becomes aware of this seed (and everyone sees the same seed). A user secretly checks whether they were selected to participate by evaluating a Verifiable Random Function (VRF) with their secret participation key and the selection seed. This computation is minimal, so even a limited device such as a Raspberry Pi can do it.

The VRF computation produces a pseudorandom output with a cryptographic proof that anyone can use to verify the result. By sending this proof, a user can prove to anyone that they were indeed selected to participate.

In an ongoing series of extended performance tests with 10,000 globally distributed participants and a uniform distribution of stake, the network consistently reached over 1,000 transactions per second (tps) with sub 5 second latency. It's important to note that uniform stake distribution is more difficult than what is seen in the real world and is the hardest stake distribution scenario for any proof-of-stake protocol to manage. Due the the efficiency of the network, the minimum transaction fee is 0.001 Algos.

Additional detail on token dynamics can be found here.

As of June 2019, Algorand Inc. has used its funds according to the allocations below:

The following chart represents the number and breakdown of all ALGO tokens that are to be released into circulation on a monthly basis.

Algorand operates an agile delivery process that is focused on shipping feature rich protocol upgrades every 3 to 6 months. Algorand grooms the backlog of features regularly in order to ensure the proper prioritization and focus of resources. Additionally, Algorand is open sourced and accepts community contributions. One of the advantages of the Algorand protocol is the low friction upgrade capability, which allows Algorand to deliver releases on a faster and more frequent cadence without disruption to the network.

Vault allows sharding state across participants in a way that preserves strong security guarantees and introduces the notion of stamping certificates, which allow a new client to catch up securely and efficiently in a proof-of-stake system without having to verify every single block.

To operate in a consensual, decentralized, and secure manner, the Algorand protocol often asks multiple users to sign a common messageTo reduce the associated bandwidth while keeping the required security, Algorand uses a new digital signature scheme, Pixel, that allows both aggregation and forward security.

Algorand's self-validating payment technology removes the need to maintain balances for the purpose of verifying blocks and/or individual payments.

These enable cross-chain and intra-chain atomic swaps in a peer-to-peer fashion that are final and instantly confirmed.

These enable a user to post her property for sale, together with a proof of ownership, her chosen price, and an expiration date for her offer.

As soon as a buyer spots the offer and agrees to the price, Algorand allows him to make the trade without involving the seller at all.

Algorand's focus to build the developer and end user communities is concentrated on providing the proper documentation, forums, tools and campaigns to drive adoption of the chain.

The community forum platform can be found here.

To date, the developer enablement programs have released a developer website, a GOlang SDK and a JavaScript SDK with additional SDK's forthcoming to promote a seamless developer experience both for current blockchain developers and developers on more traditional languages.

Algorand provides a detailed collection of resources for developers and community members to learn more about the project:

Community and social channel links are displayed below: