What are the main benefits of issuing bonds on blockchains?
Binance Research (Jonas & Etienne)
September 19th 2019
Share this article

On September 12th 2019, the Spanish bank Santander announced that they issued a bond on Ethereum. This report aims to explore past blockchain-based bonds, along with an in-depth analysis of the latest Santander issue and how to classify it within broader industry efforts.

1. A look at blockchain-based bonds

Bonds are units of corporate debt1 that are created (in jargon “issued”) and subsequently securitized as tradable assets. While the issuance of debt securities is a highly regulated and restricted process, multiple parties2 have publicly experimented with issuing or tokenizing securities.

In order to tokenize securities, a respective legal document must exist, or first be created, off-chain and subsequently be moved to a dedicated account of a trusted custodian. Once the underlying security is locked and safeguarded, a representative token can be created on a blockchain.

On the other hand, issuing securities natively on the blockchain would require the issuer not to have any off-chain legal document, yet comply with the current legal framework. Admittedly, native issuance may not suffice of existing legal requirements.

Naturally, this is a simplification of the process, but it clarifies the fundamental difference between actually creating a bond on-chain and creating an on-chain representation thereof.

Once a security has been created it can be traded on secondary markets. The trading of debt securities usually follows a two-step “delivery-versus-payment” (DvP) process. Firstly, the owner of a security agrees to transfer the asset (in jargon “delivery leg”) to the buyer, who must, secondly, reimburse the owner with cash (in jargon “cash leg”). Usually, this process requires both parties to trust each other or make use of another trusted third-party.

In this subsection, benefits and potential risks are discussed in comparison with traditional systems with potential risks. Furthermore, some pros and cons between private and public distributed ledgers are analyzed.

At least three generic advantages of using blockchains for security handling can be identified:

Table 1 compares different types of databases in regards to their methods of handling securities. For this analysis, some examples are chosen: Ethereum for public blockchains, Corda for private blockchains, and T2S as a ‘regular database’6. This may contribute to answering the question of whether private blockchains are better positioned to handle securities than public ones.

Table 1 - Comparing the suitability of databases for handling securities

The prior use of databases for handling securities can deal as a starting point for this assessment. Other important features are whether the database supports smart contracts, the possibility to control the sharing of data, the presence of settlement finality and the need for a trusted third party.

In summary, the public blockchain Ethereum currently has three major disadvantages that are, however, not inherent problems. These issues could be overcome with second-layer solutions (deliberate, modular information sharing), changed consensus mechanisms (settlement finality) and digital identity solutions (whitelisting). It is therefore important to note that private blockchains may currently be at an edge, but that also public blockchains could be used for issuing and handling legacy financial products.

As discussed in one of our previous short insights10, this Santander blockchain-bond does not represent a first in the tokenization of fixed-income instruments, as illustrated by the chart below.

Chart 1 - Past blockchain-bond issues and tokenization (in USD million)

Here is an exhaustive list of past blockchain issuances.

A Santander blockchain issuance is not the first. However, unlike some of these precedent cases, the overall process was well documentated by Santander.

Hence, this process is the key focal point for the rest of this report, which is discussed and analyzed in-depth the next section.

2.1 Overview of the bond process

A high-level overview of the entire process can also be seen in the chart below, which illustrates the various process flows.

Graph 1 - Illustration of the Delivery versus Payment process 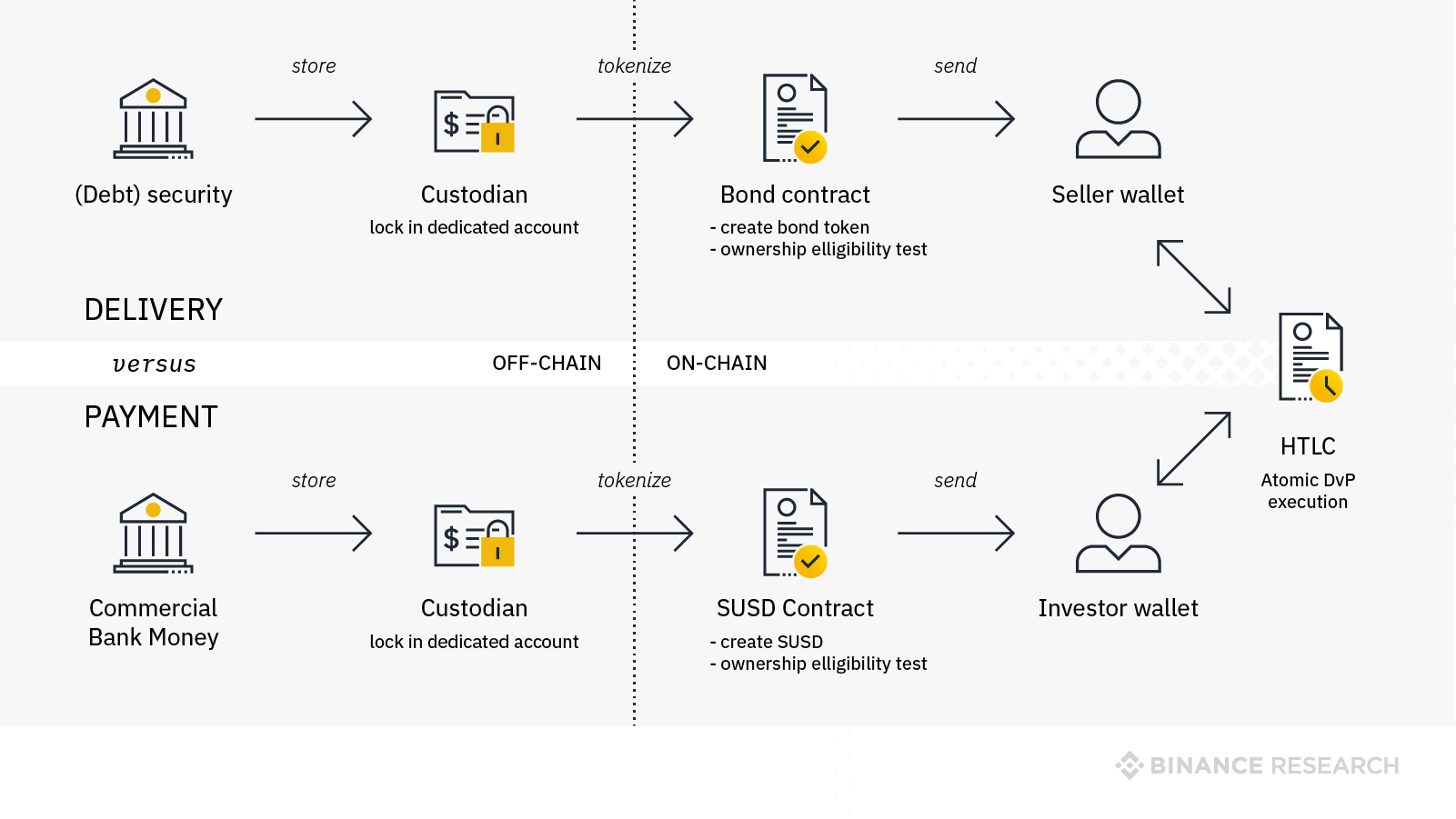 Based on data provided by Etherscan, all wallets and smart contracts were created by the same wallet address, presumably being Santander’s team in charge of this blockchain-bond handling of all involved wallet addresses. This highlights once again that this was merely done for testing purposes.

2.2 Description of the bond tokenization steps

The actual bond sale of Santander consists out of four different steps:

Once the off-chain legal documents for the bond have been created and stored with a custodian, this bond would be ready for tokenization. The respective bond token is created in this smart contract and sent to the bond owner (seller).

We can further analyze the Santander bond ‘issuance’ through the lens of the blockchain-based token framework proposed by Binance Research in early September 201912.

Simultaneously, money is supposedly stored with an off-chain custodian. The money tokens are minted in this smart contract and sent to the investor (buyer).

Allegedly, at least two additional smart contracts should exist. One of them serves the purpose of whitelisting eligible entities for token ownership while the other contract relates to the execution of the delivery-versus-payment settlement. However, no further information was provided. Known smart contracts can only be viewed through a bytecode decompiler, greatly limiting their readability from external parties.

Generally, the whitelisting contract should be referred to in the money token contract. The escrow contract - most likely being a hashed-time locked contract - is most likely similarly integrated and makes it possible to have an atomic settlement with zero or low counterparty risk.

The last step of the process is the reverse tokenization (i.e., redemption) of these money tokens. Santander USD is subsequently burned, and the equivalent amount in fiat money is supposedly released off-chain.

As a result, this redemption process is still non-transparent to external parties and is beyond the scope of this report.

In summary, this initiative by Santender lines up with ongoing industry efforts to use the blockchain for issuing and handling traditional securities. Yet, it is important to note that the issuance and handling of securities are two related, yet separate processes. Hence, this space (i.e., traditional securities) remains highly contingent on its respective legal environment and requires compliance with existing (off-chain) standards.

These standards might need further amendements in order to bridge a systematic discrimination of DLT but they remain unlikely to sacrifice core elements. For instance, settlement finality is likely to be demanded for future blockchain-based security issuances. Similarly, business practices are likely to require a deliberate and modular information-sharing process and trusted off-chain interfaces are likely to continue to exist in the near future.

Until now, industry efforts seemed to predominantly focus on private blockchains. Prominent examples are coming from the widely used enterprise blockchain software provider R3, but also from financial institutions themselves. As already mentioned in our March 2019 report about JPM Coin, JP Morgan has been increasingly concerting industry efforts to build on Quorum, its permissioned version of Ethereum, reflected by indirect positive network effects on the public blockchain Ethereum.

However, not only the legal landscape drives these processes, but also the ongoing technical development that continues to move respective boundaries on all fronts. Ethereum 2.0, the ongoing upgrade of Ethereum, might not only increase the potential throughput of Ethereum but also create real settlement finality. Other initiatives like EY’s Nightfall could potentially allow more privacy features, which could ultimately foster a greater use of permissioned networks by traditional financial institutions. Lastly, custodial key storage and other off-chain interfaces are also likely to play an increasingly relevant role in enabling the move of traditional financial instruments from legacy databases to blockchains.