October 2019 started off with the 5th DevCon (“DevCon V”) taking place in Osaka, Japan from the 8th to the 11th of the month. 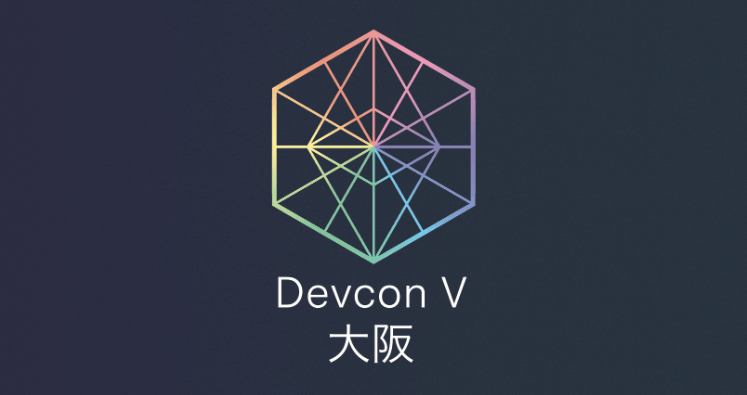 Most importantly, Eth 2.0’s launch date has not been specified. Phase 1 of Eth 2.0 includes the launch of the beaconchain that is tentatively scheduled for 2020. However, transitioning fully to the new chain might pose several, crucial problems that might persist for another “three to four years”.

Simultaneously, the launch of Eth 2.0 is highly anticipated, as indicators of network congestion have remained. While the Ethereum Network utilization ratio fell from an average of 94% in September to an average of 70% in October, it is still considerably high.

One possible interim solution to scaling Ethereum could be a state-channel variant (“optimistic roll-up”), which was developed by the Plasma Group and presented at this DevCon. Scaling, in general, was a dominant theme that is also used as a differentiating factor for the technical stack of several “Ethereum killers”. Additional common points of interest were sharding, guaranteeing composability, and using (practical Byzantine Fault Tolerant) Proof-of-Stake based consensus algorithms. In general, staking became increasingly relevant and already accounts for $8 billion in the crypto-activity. Currently, the total market size represents roughly $15.4 billion and leaves thus substantial room for growth1.

Other than that, Telegram delayed the launch of the Telegram Open Network from the end of October to the first quarter of 2020; Bitcoin dominance remained rather flat at roughly 67% and projects are gearing up for the announced launch of MakerDAO’s multi-collateral-Dai on November 18th. In a similar vein, MakerDAO’s success inspired many projects to replicate and iterate on this business model - Kava’s successful Binance Launchpad raise of roughly $3.5 million is a testimony to that.

Most notably, however, the end of October was shaped by a sudden spike of the BTC price. On October 25th, the BTC/USDT spot price increased by more than 30% in 15 hours, reached a temporary high of $10,370 and closed the month at around $9,200. Meanwhile, Binance Futures has been gaining momentum, since early October, with a substantial increase in its volumes. Concluding, Bitcoin experienced its second-most volatile day in the last two years, yet resulting in a monthly price change of +13.96%. 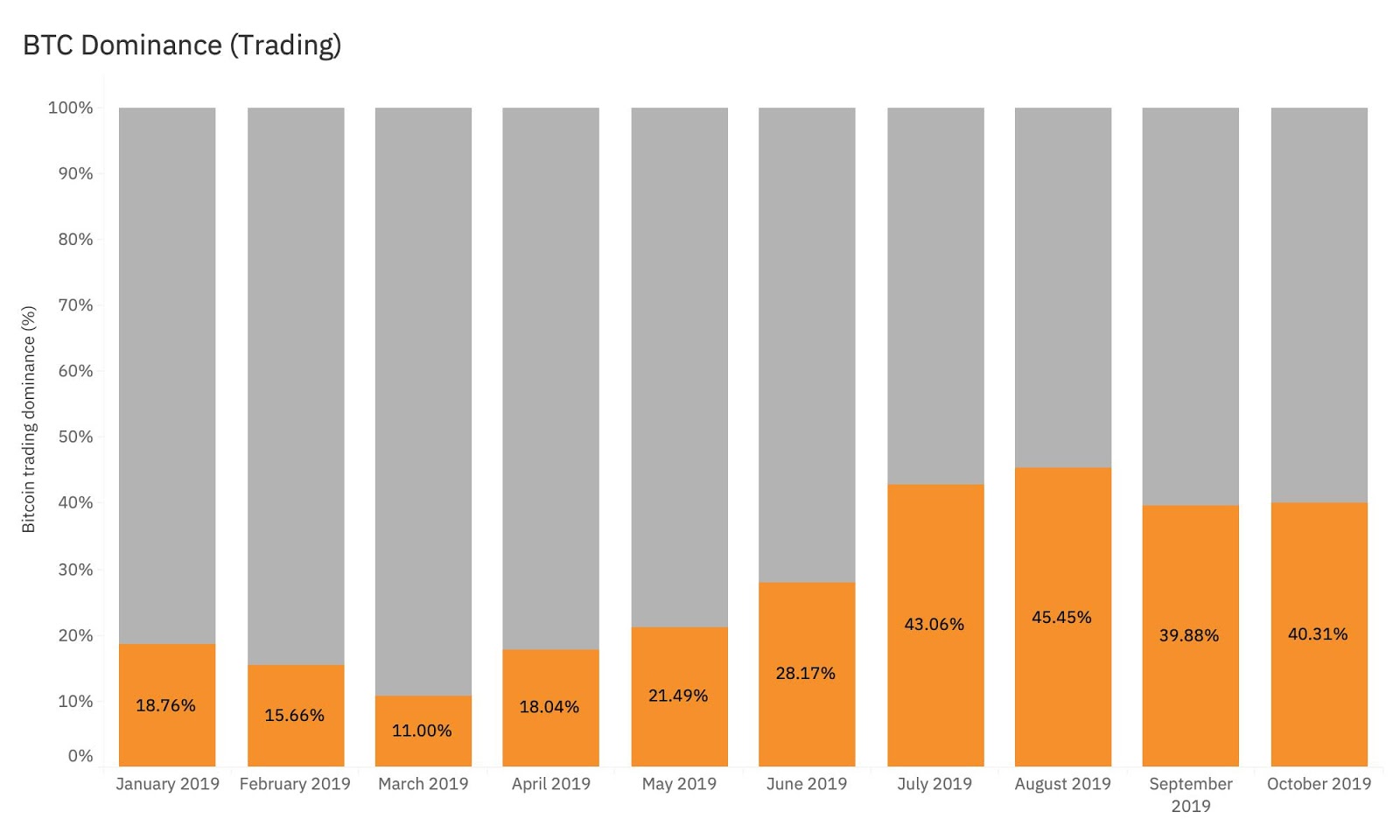 “Bitcoin trading dominance represents the respective volume contribution from Bitcoin trading, with BTC as a base currency, relative to the total spot volume on a platform (e.g., Binance) over a period of time.”

From a listing perspective, October 2019 was relatively quiet with only three new base assets being listed such as Blockstack, a decentralized computing network and app ecosystem, and NKN, the winner of the October community listing vote.

Furthermore, it is worth mentioning that NEXO was also listed, making it one of the largest assets, from a circulating supply perspective, to be listed on Binance Chain. Since its listing, its volume has been one of the largest contributors to the total volume on the Binance DEX.

However, as illustrated in chart 3, the daily volume on the Binance DEX remains around $1.5 million. Despite it representing less than 0.5% than the daily volume on Binance.com, it still represents one of the most significant trading places amongst decentralized exchanges.

Eventually, from a technological perspective, Binance Chain has successfully completed its Archimedes upgrade. One of the most notable features is the introduction of BEP3; it introduces atomic swap between Binance Chain and other blockchains which support smart-contracts (e.g., Ethereum and other EVM-compatible blockchains).

On the derivatives side, Binance perpetual futures’ BTCUSDT contract2, whose trading began on September 2nd, displayed a spectacular rise in its volume in the second half of October.

Starting the month with a daily volume ranging between $250M to $350M, it steadily increased until October 22nd ($576M recorded). After, it peaked to above $2 billion (on October 26th) before stabilizing slightly below $1bn in the final days of the month.

Relative to the spot volume on BTCUSDT (from Binance.com), its volume increased significantly in October; it has been consistantly higher than the spot volume since October 3rd.

Chart 4 - Futures volume contribution (%) to the aggregated volume on total (spot + perpetual futures) BTCUSDT on Binance.com since its trading inception

While the difference in fee structure (between spot and derivatives markets) could explain this fast increase, we expect the volume of the derivatives market to keep raising and this situation to become “the new normal”. Furthermore, it is worth noting that other BTC large spot markets exist on Binance.com with a variety of quote assets such as BUSD, PAX, TUSD, and USDC.

Meanwhile, the Open Interest (OI) has been steadily increasing, finishing the month, with an increase of +231% compared to the OI recorded on September 30th.

As Binance Futures has recently rolled out several features such as its low-latency service for large clients, it is likely that this volume trend will continue in the short to medium term owing to large professional clients participating in greater numbers.

On the borrowing and lending markets, three new assets have been added for margin trading: BUSD, BAT, IOST, VET, and QTUM (see table 6). Meanwhile, subscriptions (now referred to as “fixed deposits”) have continued while flexible deposits have been added, with variable rates being much lower than fixed rates).

This section is prepared by Binance Trading, one of the world’s most liquid OTC desks for cryptocurrencies and digital assets3. The content reflects solely the views of Binance Trading.

What a rollercoaster ride!

October looked to be a fairly dull month. BTC prices mainly moved sideways from the $8,000 to $8,500 range while BTC dominance hovered at 66%. Some altcoins made gains against BTC, but everything seemed business as usual. Then October 23rd came where within about an hour, BTC dropped from $8,000 to $7,500. This move was just the first bump of a 3-day wild roller coaster ride though, as on October 25th, BTC made one of its largest single-day gains in history by moving from $7,500 to over $10,000. While the markets have since calmed down, this month showed that wild price movements for BTC still can and will occur. So what caused this drastic move?

It is obviously difficult to pinpoint exactly what causes an asset’s price to drop or increase. In this case though, BTC’s significant gain does seem highly correlated with a speech that Chinese president Xi Jinping gave. During a 30-minute speech, Xi spent about 5 minutes stressing the importance of adopting blockchain technology for future innovation. Shortly after, Bitcoin made historical gains, and “Chinese” coins such as Bytom, NEO, and Ontology made correlated gains. Presumably after seeing this correlation, one exchange even released a futures contract based on an index of the top Chinese coins. Since the pump, BTC and these Chinese coins have held up reasonably well in terms of price. However, it remains to be seen whether this was a short pump or something more long term, especially after state-sponsored news media in China stated that Xi’s speech was an endorsement of blockchain technology and should not be an opportunity for people to speculate in virtual currencies.

Before October 25th, our Binance Trading desk saw a large number of altcoin trades. Traders likely saw this period as a good chance to move in and out of altcoin positions, as the market was moving sideways. Flows were mostly sell-dominant and included a wide range of altcoins from high market cap coins like Ethereum to low market cap coins. After October 25th, flows were BTC-dominant, with buy and sell flows being nearly equal. Traders seemed to have a hard time deciding which direction BTC would move in after prices fell back to around $9,500.

In a poll conducted on the Binance Trading Telegram channel on October 26th, members were asked about what the BTC price would be on October 31st. Out of 682 respondents, 34% responded with above 10k, 32% responded with below 10k, and 34% responded with “exactly 16k” (jokingly). Bitcoin has since stabilized around $9,200, so it will be interesting to see in November which direction BTC trades, and whether altcoin flows will pick back up with the market stabilization.