Central banks around the world can be expected to issue their own Central Bank Digital Currency (CBDC). Their primary motivation finds roots in the declining use of cash and the lack of a digital alternative from public institutions, leading to the growing contribution of private entities to the digital economy, often falling outside the scope of public oversight.

Sweden’s e-krona pilot project is assessed in a case study: the Riksbank is consulted by Accenture and uses R3’s Corda platform. The proposed outcome is a value-based, closed system with a two-tiered architecture with a global notary (i.e., consensus) node.

Central Bank Digital Currencies (CBDCs) have increasingly been moving into the spotlight. CBDC is conceived of as “digital cash”, or more formally “digital claims against the central bank”. This is highly relevant, as claims against the central bank are considered to be the only risk-free money [1,2,3]. As such, CBDC is deemed superior to alternatives from commercial banks, tech firms, and cryptocurrencies.

The Bank of International Settlements (BIS) conducted two surveys on CBDC among central banks. Some of the results, such as the engagement, scope, and status of respective efforts, are shown in chart 1.

Chart 1 - An overview about CBDC efforts of surveyed central banks

Chart 1 displays that there is significant interest from central banks. About 10% of the surveyed central banks are likely to “issue a general purpose CBDC in the near future”.

The expected benefits from CBDC are reasonably similar for wholesale and general-purpose CBDC in both Emerging Market Economies (EME) and Advanced Economies1 and cover broad areas from financial stability to financial inclusion and payments efficiency (c.f. BIS, 2020).

In this context, cryptocurrencies and, in particular, stablecoins have already garnered specific interest from central banks while being perceived by the BIS to warrant even further attention.

Most importantly, however, the motivation to investigate CBDC seems to be related to cash use and the current absence of public digital monies. For instance, Chart 2 clearly shows the decline in cash payments in developed countries.

Sweden, too, states the decline in cash payments as the most important reason for its e-krona pilot program. Tables 1 and 2, show the development of selected payment instruments. When considering the joint value processed via ATMs and payment terminals, the share of ATMs went down from 48% in 2005 to 12% in 2018. This is only partially capturing the overall situation, as online payments are not captured in this table.

Table 1 - ATMs: development of proxy measurements for cash payments in Sweden from 2005 to 2018

Table 2 - Payment Terminals: development of proxy measurements for cash payments in Sweden from 2005 to 2018

The Riksbank’s proclaimed goal is to provide the public with a digital equivalent to cash and thus offer a complementary (“risk-free”) solution to digital money from private market players (i.e., commercial banks). Earlier respective research results are visible in their first report in 2017 and the follow up report in 2018.

The Riksbank pilot project should generally be considered as a technical outline of possibilities, not as a likely implementation. This is the case, as such CBDC would require various political decisions that would be not uncontroversial. Nonetheless, the Riksbank already demonstrated its will to change existing legal understandings (by, for example, proposing to change the concept of legal tender).

Irrespective of challenges related to the implementation of such CBDC, some of the conceptual elements of Sweden’s CBDC pilot are unlikely to change2.

The general architecture, displayed in chart 3, of Sweden’s CBDC pilot is two-tiered: 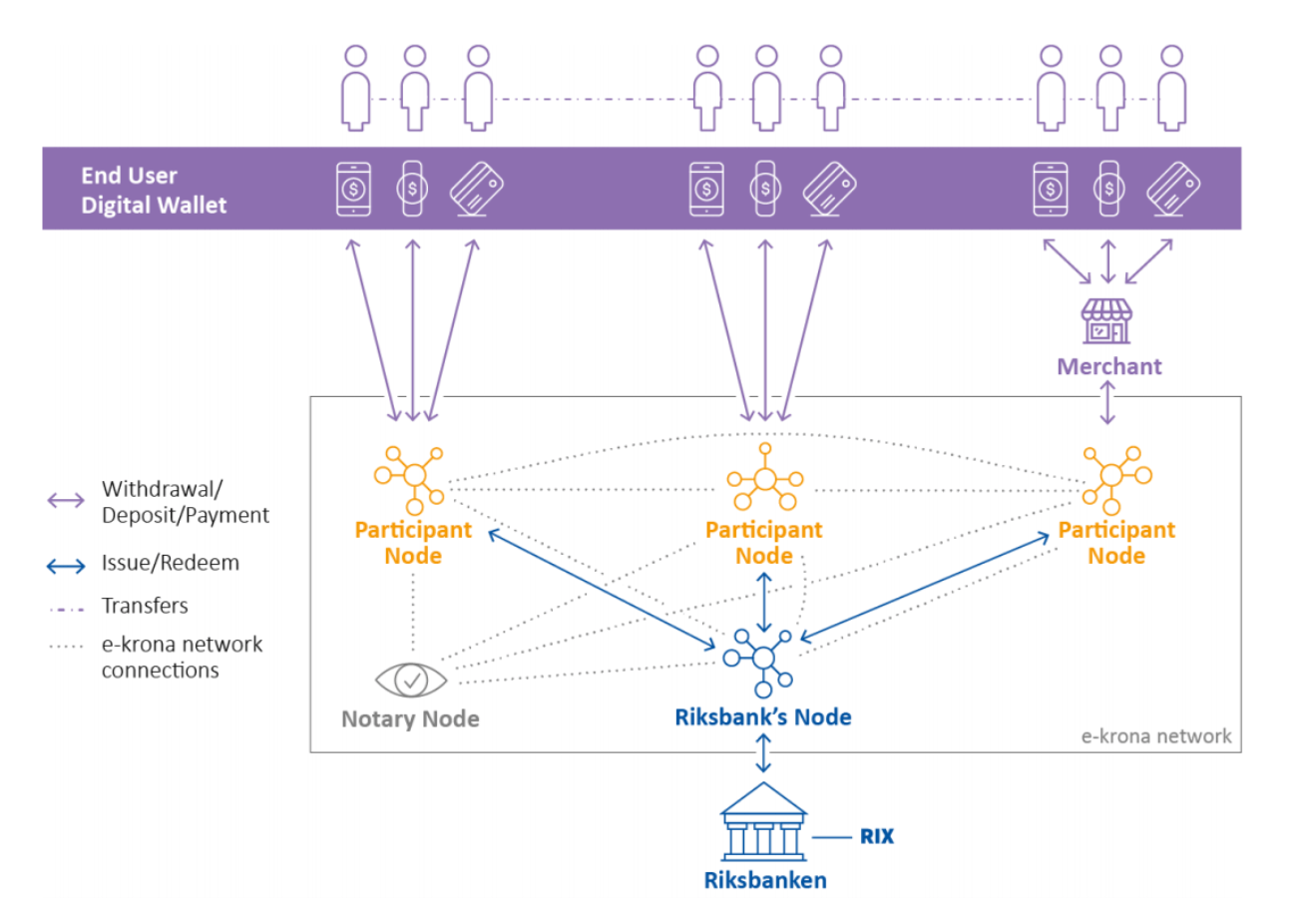 After activating a user wallet with a Network Participant, end-users shall be able to use-Kronor for P2P and P2C transactions in an inclusive, 24/7 available manner with offline functionality.

Notary nodes fulfill the role of miners in Nakamoto consensus-based blockchains. Notaries thus avoid double-spending and create finality for transactions. While Corda’s original whitepaper states that notaries “are expected to be composed of multiple, mutually distrusting parties”, there are simpler options - such as having only one notary node i.e., which is the case in this prototype.

3. Concluding on the role of technology providers and consultants

The e-krona case study also shines some further light on the role and relevance of technology providers and consultants. Based on anecdotal evidence, certain technology providers, R3 in particular, appear to be dominating the provision of distributed ledger technology frameworks for CBDCs.

Sweden’s e-krona seems to be the “generic R3 package”. The role of consultancies such as Accenture can be understood as “translating” between the functional expectations and the technical implementation.

Generally, the design elements displayed in the below table are considered in the typical “CBDC wishlist”.

When assessing E-Krona within this framework, it becomes evident that various design specifications have not yet been made. As such, the current e-krona prototype is exciting, potentially even representative of the most common development status, but most likely neither pioneering, nor the most advanced CBDC set-up.