However, the overall correlation observed across the cryptoasset market has increased, which may be due to the steady decrease over the course of 2018 in the market’s reliance on Bitcoin-denominated trading pairs, and the corresponding rise of stablecoin volume in all cryptoasset markets1. In this report, we will further discuss the cyclicality of correlations among cryptoassets and the effects of market structure on this cyclicality.

Correlations between the USD price of cryptoassets are constantly fluctuating due to a variety of factors - one of the most important factors is market irrationality, which has an effect similar to a "herding effect"2 or co-movement phenomenon.

The below chart displays the average correlation, in USD prices, amongst all Altcoins (excluding the top 10 stablecoins). The data shows that whenever correlations between these coins reach a specific positive upper bound of [0.8 to 1.0], the trend of Bitcoin against USD tends to reverse, or at least halts the previous price action.

Table 1 below captures the duration and maximum correlation during each period where positive correlations between altcoins and Bitcoin surpassed the 0.8 mark. The cumulative duration of these periods totaled 513 days, or more than one-quarter of the entire sample range from 13 February 2014 to 14 March 2019, indicating that the crypto market is prone to show extreme correlations. This total duration of time above the 0.8 threshold was almost 1.3 times the amount of time during which the metric dipped into negative territory (only 381 days).

Within this period, the composite altcoin correlation with Bitcoin also hit an all-time high (13 Mar 2018). That coincided with Bitcoin's fall from the $6,000 range to the $3,000 range. This high correlation suggests that market sentiment has already found a local maximum during that period, and a trend reversal may possibly ensue.

Such a price movement pattern, to some extent, may reflect both the irrational behavior of market participants and some inherent traits of a young market.

However, given the short history of the crypto market, it may be premature to say that there is a causal relationship between peaks in correlation and market reversals, or if it’s actually a herding effect during the market reversals themselves. We will continue to observe the development of this phenomenon, but believe that it could be a valuable sentiment indicator.

The cryptomarket’s frequent periods of extreme correlation are inseparable from the market’s highly retail-driven participation.

From data collected by cryptofundresearch.com, around 700 crypto funds operate in the cryptomarket today4, representing a total of just under $10 billion in assets as of January 2019. With a conservative assumption that they all hold solely Bitcoin, this would account for an upper bound of only 14% of the total market value of Bitcoin; if Altcoins were included in the assumption of their holdings, (given that BTC dominance percentage is around 50% as of time of writing according to Coinmarketcap), the “institutional proportion” overall could be less than 7% for the cryptoasset market. 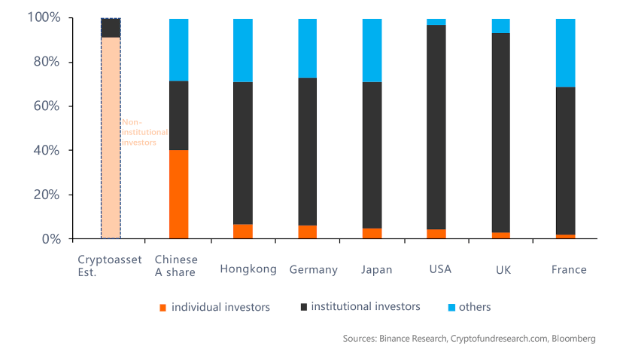 Others include nonprofit holders like central banks or governments.

Meanwhile, crypto’s estimated 7% institutional participation rate represents only one-thirteenth of that for the U.S. stock market.

In addition to having an unusually high percentage of retail investors, the cryptoasset market and the Chinese stock market both have extremely high turnover rates.

Chart 3 below illustrates the phenomenon that markets with fewer professional investors tend to have a higher turnover rate (defined as annual trading volume divided by total outstanding shares). 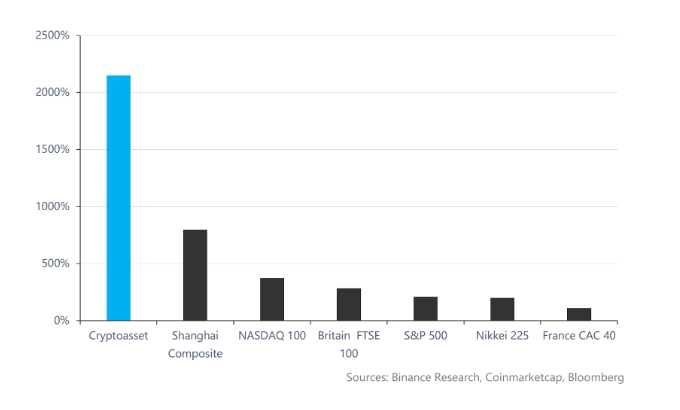 Annual turnover rate within the cryptoasset market6 stands at 2150% over 2018, which is 6 times that of the US stock market and 3 times that of the Chinese stock market, indicating that crypto investors are perhaps more easily moved7 by news and information, holding positions for a shorter time.

However, it is certainly too early to draw the same conclusions about crypto investors. In fact, it may be that crypto investors are more active and attentive to new market developments, and more hands-on with participation in the governance, community development, and general progress of the coins and tokens they invest in. In other words, they have a material impact on the success of the crypto networks they participate in and are incentivized to make their voice heard, even if it is simply through price action.

2.2 HODLing: another feature of crypto-investors

In the face of market downtrends, unlike many momentum-driven institutional investors, most investors in the cryptoasset market may prefer to “HODL” through a prolonged decline in prices, but quickly become active when prices recover to near previous highs.

This behavior can be observed through the metric of “realized cap”, which was introduced by Antoine Le Calvez and Nic Carter9 in 2018 and is also referred to as the “UTXO market cap” of a cryptoasset.

This metric is resistant to downward movements in the market capitalization of Bitcoin, as it is a measure based on the summation of the last on-chain movement market price across the Bitcoin network. Thus, rather than marking all of the coin’s available supply to the current spot price, it only marks down coins that are transacted at the spot price from when their most recent transaction occurs.

Chart 4 - "UTXO market cap" and the spot price of Bitcoin 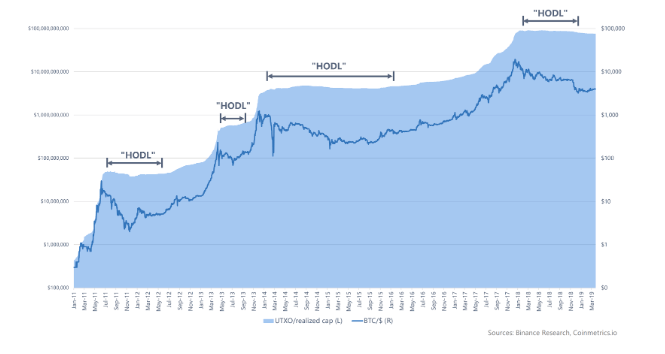 Chart 4 shows that crypto investors tended to HODL in bear markets, leading to only moderate changes in UTXO cap during these periods10. If individuals were to transact with Bitcoin at the lower USD value prices at the same pace as pre-bear-market, the decline of UTXO cap would be steeper. It is also worth noting that after a significant bear period, the measure does not quickly pick up, at least until the underlying price approaches its previous peak11.

This echoes the findings of Calderón (2018), who utilized the CSAD model12 to demonstrate that crypto investors tend to display greater “herding” effects in a bull market, and are more inclined to HODL when overall yields fall in a bearish market

Additionally, the effects of the price movements of leading coins such as Bitcoin or Ethereum also carry through the rest of the market13, as many Altcoins are only available to be traded against other crypto-denominated pairs, leading to the tendency for cryptoassets to form singular, unified trends:

Essentially, high correlation among cryptoassets can be summed up by an “if you can’t beat ‘em, join ‘em” mentality; during a unilateral trend (late bull or early bear phase), excess returns denominated in USD would become harder to capture, so it becomes easier for market participants to just ride the market waves.

However, the effects of “herding behavior” always depend on the specific situation. If the initial information is correct, "herding effects" will cause information to be reflected in the price more quickly. For example, in the 2017 ICO boom, many investors were aware of the potential of cryptoasset financing through the creation ERC-20 tokens, and consequently, investors quickly piled into Ethereum, which illustrates the herding effect that quickly spread through the market and vaulted Ethereum to the second place market cap position behind Bitcoin14.

Whereas the traditional equities market is both mature, with high institutional presence, and sophisticated - with a wide range of derivatives products across many developed countries (e.g., United States, Japan, Germany), the cryptoasset market- which is less than 10 years old - has faced several issues over its young lifetime, such as:

Due to the above, the effects of a quick-to-react market participant becomes even more pronounced, making accurate pricing of individual cryptoasset even more difficult. Hence, “irrational behavior” or herding effects should not just be blamed on inexperienced market participants, but should also be attributed to market infrastructure and maturity,

However, especially after 2018, we continue to see various traditional research institutions, regulatory bodies, and media outlets paying more attention to the blockchain industry, in addition to a wave of crypto-native coverage and research being built and grown each and every day.

The quickly maturing industry has already attracted new funds and support from governmental and traditional capital sources, and looks to continue to do so with each additional step of regulatory clarity, improved data and news reliability, and reduced usability friction, leading to more efficient price discovery in the market as a whole.

Please see tables 2 and 3 below for a recap of the progress of the space over the last few quarters. With the rollout of many mature financial products covering the industry and a clearer regulatory framework worldwide, the crypto market may be maturing faster than ever.

Table 3 - The status of cryptoasset regulations around the world