In the financial industry, correlations have been widely used by analysts and fund managers to diversify and efficiently allocate their assets across sectors and industries. Despite the nascency of the cryptoasset industry, these metrics have gradually become more scrutinized and analyzed by all crypto-stakeholders, institutional and retail.

This report will analyze correlations across all largest cryptoassets over the first six months of 2019.

Despite a pullback in the final days of the second quarter, the overall performance of the cryptoasset market was extremely positive in the first six months of 2019.

The total value of the cryptoasset industry rose by +139% in the past quarter, marking the third best quarter the industry has seen since 2014. In absolute dollar terms, the total USD value of cryptoassets increased by roughly $199 billion in the second quarter of 2019, the second-highest quarterly growth on record, ranked only behind the bull run of 2017 Q4.

2. A look at correlations over the second quarter of 2019

In general, assets with a correlation above 0.5 or below -0.5 are considered to have strong positive/negative correlations. Similarly, a close-to-zero correlation indicates a lack of linear relationship between two variables, and for the purpose of this analysis, the returns of two assets.

In this report, 30 of the largest cryptoassets (excluding stablecoins) were selected based on their average market capitalization over the first 6 months of 2019.

In the following section, correlations in the second quarter of 2019 are discussed along with insights and observations from the dataset. 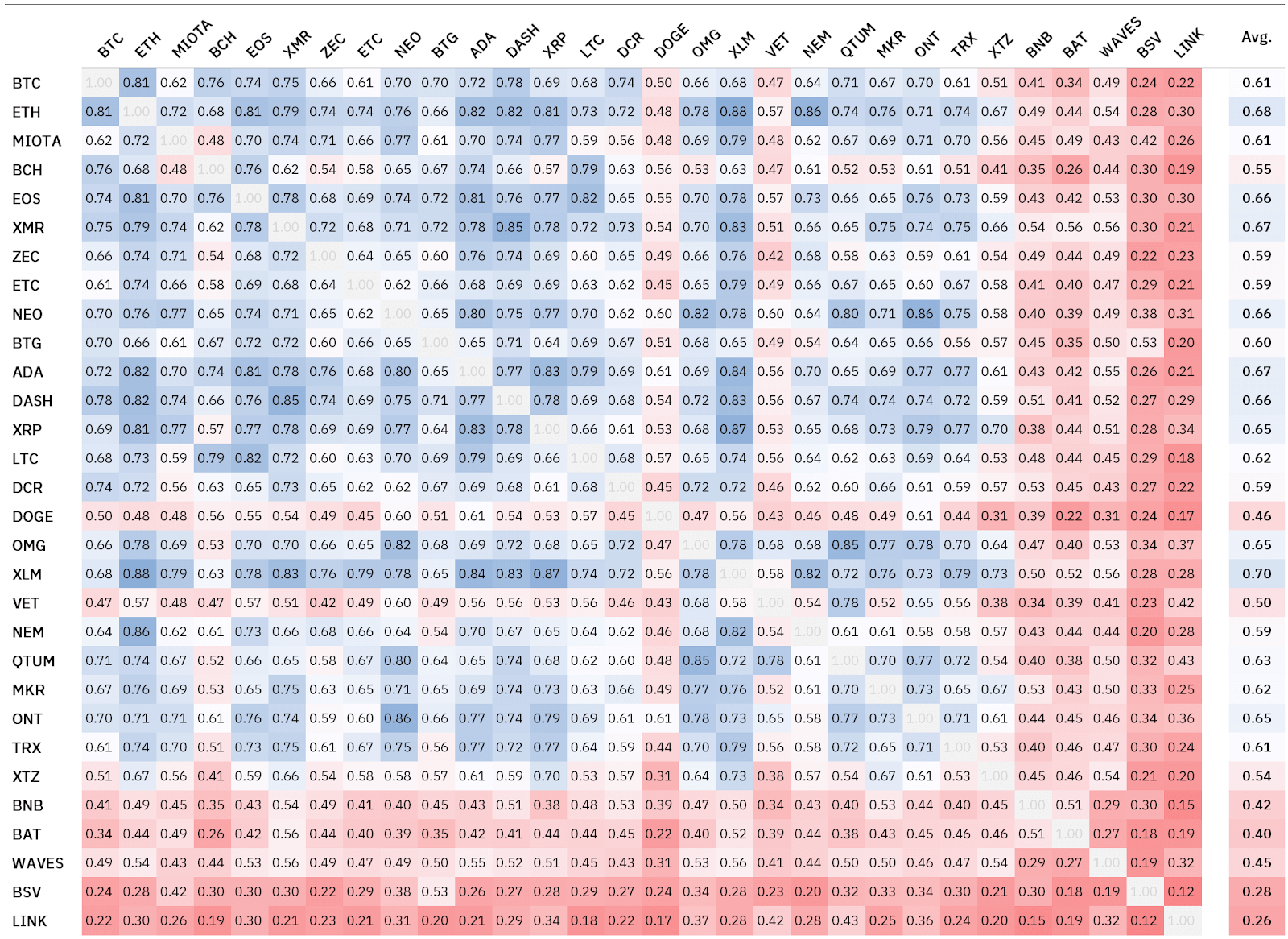 The overall correlation between these top digital assets remains quite high, with a majority exhibiting correlations above 0.5 with other cryptoassets.

Additionally, no single pair of cryptoassets exhibited a negative correlation, which indicates that the influence of idiosyncratic factors on the performance of individual coins is still relatively minor, and individual cryptoasset prices are still heavily influenced by overall market changes (as highlighted in our previous report1).

Nevertheless, an analysis of several idiosyncratic factors and events suggests they may have had an impact on correlations of specific crypoassets in Q2 2019:

In addition to project-specific catalysts, consensus mechanism design and exchange listings were previously discussed in our March 2019 report as potential key factors influencing correlations among specific assets. In revisiting these catalysts, we observed similar effects during the second quarter of 2019:

In the next subsection, these results are compared with results from the first quarter of 2019. 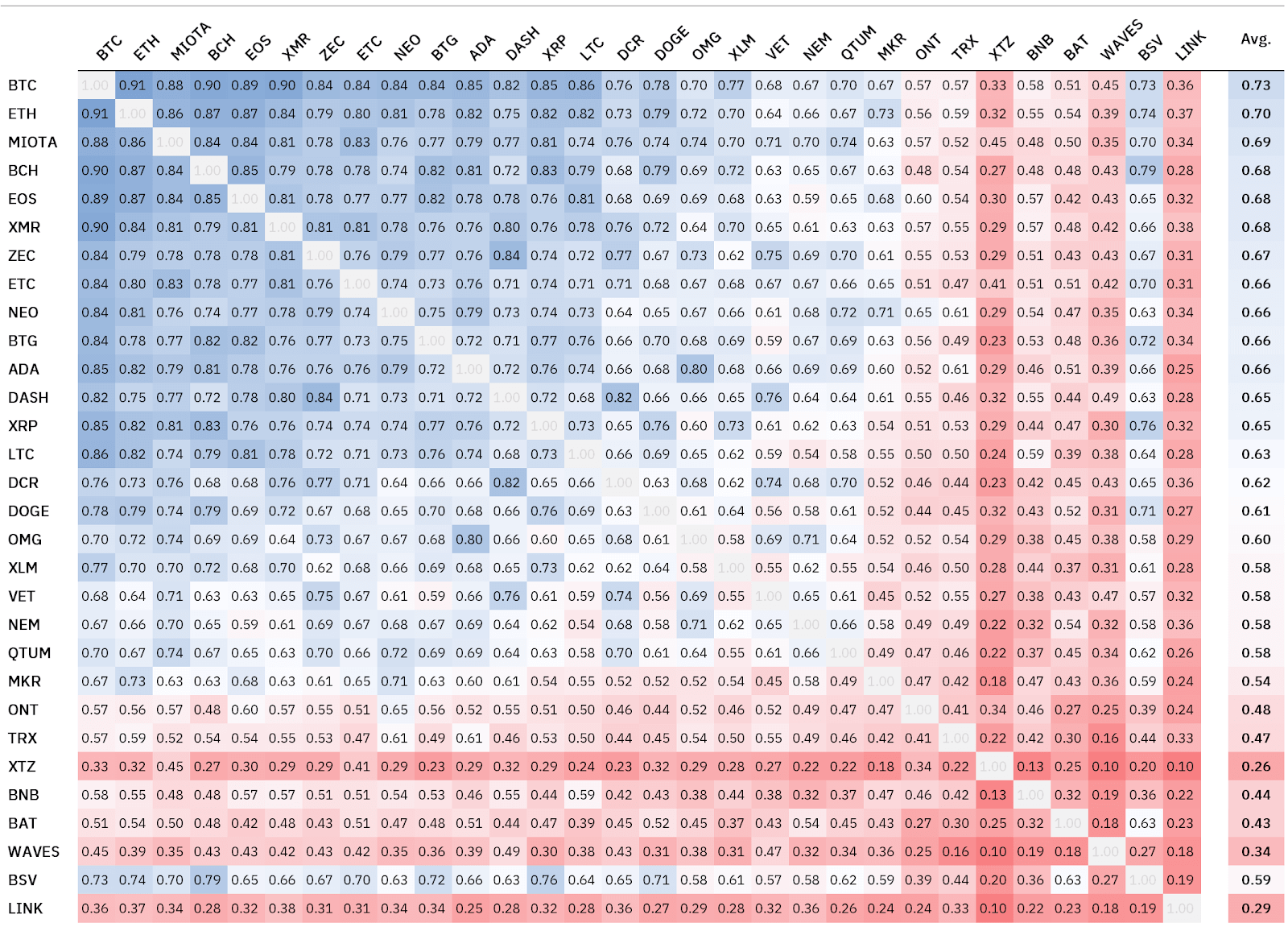 Most of the correlations are similar to the results from our March 2019’s report about crypto-correlations9. However, it is worth noting that the average correlation between Bitcoin and all other major cryptoassets fell from 0.73 to 0.61 in the second quarter.

Some interesting insights can be drawn from the table above:

As a result, it is still difficult to diversify within the crypto-industry through long-only positions in large market cap cryptoassets. However, alternative strategies such as investing in lower-market cap cryptoassets or a combination of long/short positions may help investors building market-neutral portfolios. With increased access to DeFi12 and margin products, investors may be able to access more liquid, sophisticated instruments to allow them to construct more unique strategies in the future.

4. A look at Launchpad

This section analyzes the strength of correlations among these Q1 IEOs during Q2 between March 31st and June 30th, 2019. Though the projects are unrelated in their target niches (BitTorrent focuses on decentralized file sharing, Fetch focuses on advanced data marketplaces, and Celer on layer-2 scalability), they were all listed under similar market conditions, reaching the open market shortly after completion of their public sale on Binance.

The top 7 market cap coins, based on June 30th market cap, were selected along with the 5 projects that offered tokens on Binance prior to the beginning of Q2 2019. Correlations across March 31st to June 30th were then calculated with each project’s returns. 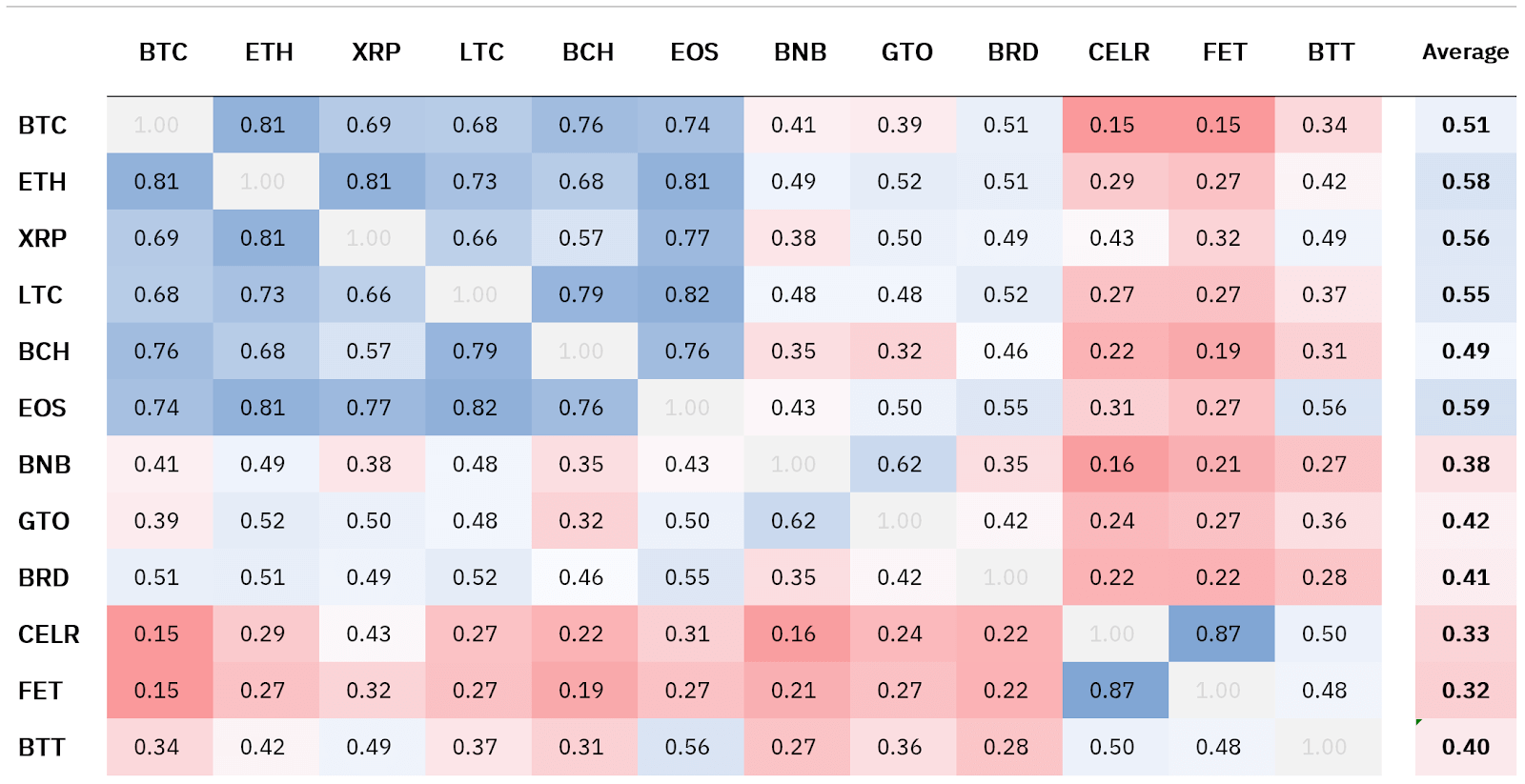 Most clearly, all three Q1 2019 IEO projects were highly uncorrelated with the rest of the market, exhibiting the lowest correlations observed against the top market cap coins; this effect was even stronger for recent Launchpad projects, as opposed to Binance’s first two Launchpad projects, Bread (BRD) and Gifto (GTO), which first offered their tokens in late 2017. On average, the three IEO projects exhibited an average correlation of 0.32 against all other coins in the cohort, compared to an average of 0.58 amongst the other 9 projects.

Notably, the three recent IEO projects also exhibited fairly low correlations with BNB, with an average of 0.22, despite their initial offering being (at least partially) priced in BNB. Most interestingly, BitTorrent (BTT) exhibited the highest correlation (at just 0.27) with BNB amongst the three, despite being the only one that had a sale that accepted two tokens for the raise: BNB and Tron (TRX).

Amongst the three IEO projects, correlations were relatively higher compared to correlations between recent IEO projects and non-IEO projects, with the lowest correlation being BTT and FET (0.48). One outlier was the correlation between Fetch and Celer, which recorded a shockingly high correlation of 0.87 during Q2 2019. One potential explanation for this phenomenon was that both were launched in March under similar market conditions, whereas BitTorrent launched a full month earlier.

In line with our previous reports, idiosyncratic factors are seen as the key factors impacting the strength of correlations among cryptocurrencies and digital assets.

The noticeable decrease in Bitcoin’s correlation with other assets might be explained by a potential “flight-to-quality”, paralleling the same Bitcoin dominance increase at the beginning of the 2017 bull run.

This report focuses on recent changes in correlations in the industry and further analysis could help in assessing whether today’s crypto-market environment behaves similarly to historical early stages of bullish environments in traditional financial markets.