However, the overall correlation observed across the cryptoasset market has increased, which may be due to the rise of stablecoin volume, and corresponding increase in pair offerings, in all cryptoasset markets. In this report, cluster analysis over the twelve previous trading months (March 2018 to March 2019) was conducted to distinguish whether cryptoasset clusters, constructed using an unsupervised learning approach, can be created and more importantly, interpreted.

Cluster analysis is a technique used to group sets of objects that share similar characteristics. It is common in statistics, but investors will use the approach to build a diversified portfolio. Stocks that exhibit high correlations in returns fall into one basket, those slightly less correlated in another, and so on, until each stock is placed into a category.

For the top 30 cryptoassets by market capitalization, USD-equivalent prices were retrieved as reported by CoinMarketCap.

Stablecoins are excluded from the analysis along with any cryptoasset that is backed by other assets, whether they are digital or physical1. Specifically, 30-day rolling average market capitalizations were computed and the 30 “non-backed” largest cryptoassets (as of March 31st 2019) were selected.

The eligible assets based on the methodology described in 1.1 results in the following digital assets being selected are the following:

Bitcoin, Ethereum and XRP account for most of the industry total market capitalization. 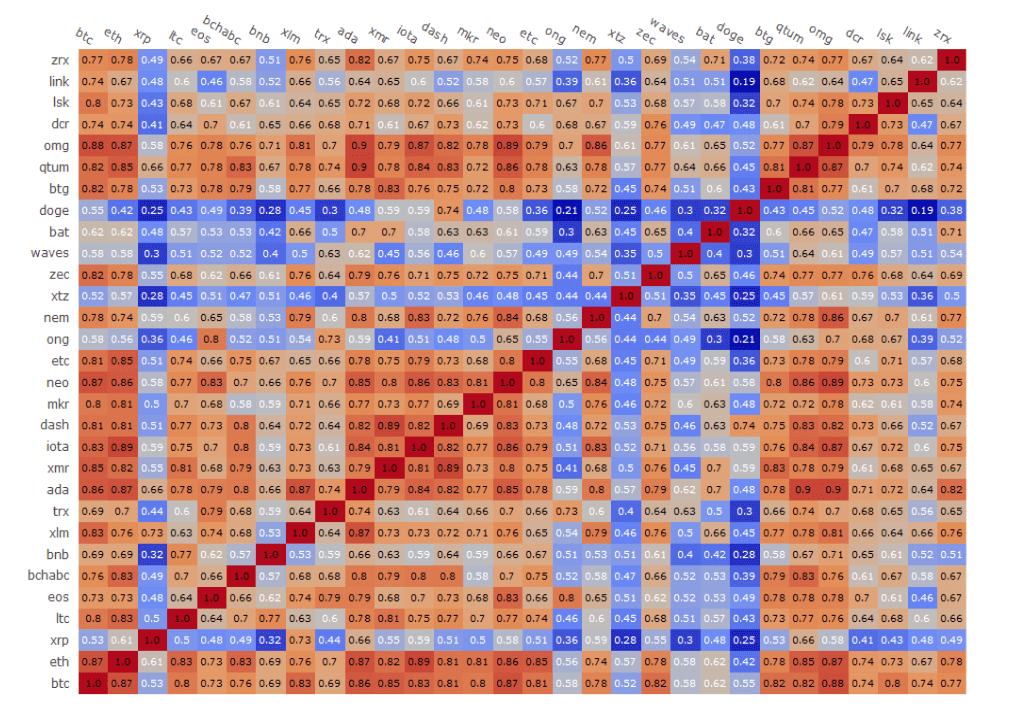 As explained in the first section, the top 30 digital assets, based on the 30-day mean market capitalization as of March 31st 2019, were considered for this analysis.

As highlighted in our previous reports:

However, a few additional observations were noted: 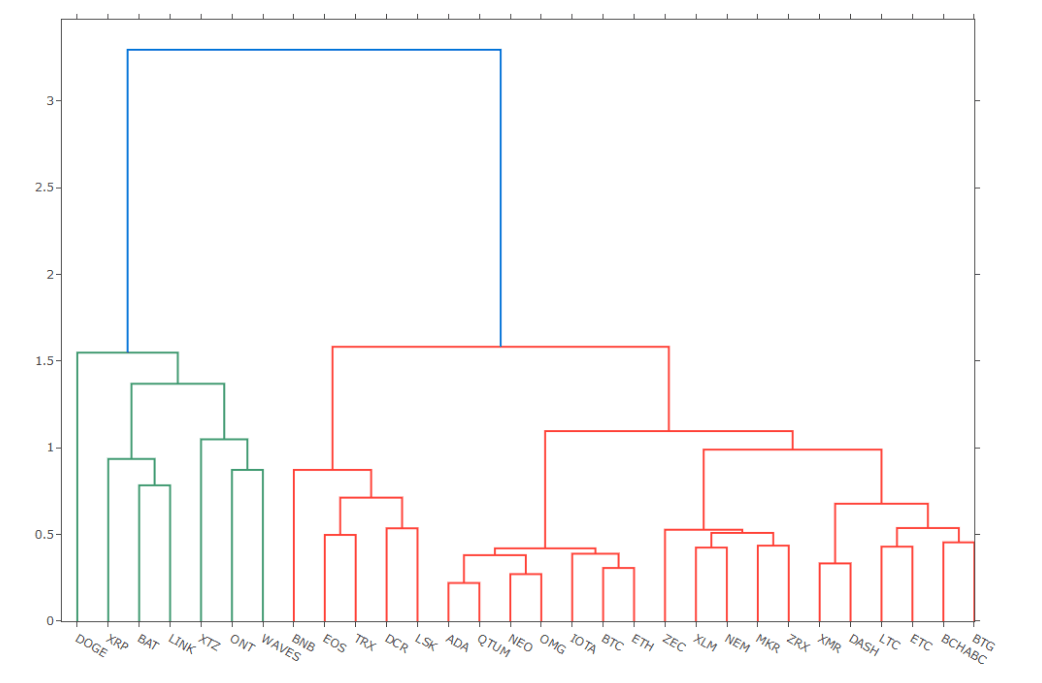 Based on the above dendrogram, some clusters seem to share similar characteristics such as:

However there are clear limitations to any of the interpretation above:

Based on the above figure, the optimal amount of clusters appears to be around 6, as the marginal improvement in the total within-cluster sum of squared distances becomes very small beyond 6 clusters.

As a result, six clusters are selected.

Cluster B is constituted by digital asset with high volatility but negative average returns over the period.

Based on a traditional risk-return attributes of cryptoassets, many assets share the same risk-return profiles (clusters B and C). Cluster C is consistuded assets with extremely high volatility but annualized returns either positive or slightly negative (the exception being IOTA).

Clusters D, E and, F are made of one single digital asset such as:

In general, the drawback of this method is that two assets might belong to the same cluster without having any correlation. Precisely, two assets may display a negative correlation while simultaneously sharing an exact same risk-return profile within the market, resulting in them being part of the same cluster.

In the future, our approach must be extended to include additional characteristics such as: market capitalization, volume and turnover ratio.

Native blockchain metrics such as hashrate, active addresses, on-chain transactions or amount of active nodes could also be used as inputs in cluster analysis to analyze what are the underlying dynamics among cryptoassets.

Cluster analysis is an unsupervised learning technique that provides flexibility in classification of objects in groups without introducing human bias. For digital assets, cluster analysis has not been extensively studied in research and this report represents one of the first attempts at classifying cryptoassets from an unsupervised approach.

Whereas some of the results appear to be consistent with industry-defined fundamental approaches, the difficulty of finding trustworthy data may hold investors back from completing a thorough analysis on this topic. In comparison, traditional equity markets offer plenty of metrics (e.g P/E ratio, turnover, ROE) that are routinely used in research reports.

Additional cluster analysis of the digital asset industry could be performed from different perspectives, and further research on different crypto market cap segments (e.g., mid and small caps) with alternative inputs such as hashrate or on-chain transactions may help paint a more complete picture for the cryptoasset market as a whole.