What do correlations among cryptoassets tell us about 2019?
Binance Research (Jonas)
January 22nd 2020

This report discusses market performance in 2019 for large cryptoasset and assesses correlations between cryptoassets in Q4 2019, and the entire year of 2019.

Having already started in Q3 of 2019, the adverse price movement across most large marketcap cryptoassets continued in Q4. While only three assets, Tezos (XTZ), NEO, and Bitcoin SV (BSV), started recovering their price, all price movements slowed down drastically, indicating a potential stabilisation of the market.

Assessing the entire year of 2019, four of the ten largest cryptoassets partially sustained their substantial price gains from Q1 and Q2 of 2019. Bitcoin price climbed by 87%, only outperformed by BNB, which climbed by almost 130% during 2019.

An extended list for the price performance of the next ten largest cryptoassets can be found in the appendix1.

Notably, the adopted methodology for the quarterly price movements is the following: three-day median closing values reported by CoinMarketCap, ranging from 01.01.2019 to 01.01.2020. Instead of taking the usual daily closing values, a three-day median base-value may partially account for the substantial volatility of the assets.

“Bitcoin trading dominance represents the respective volume contribution from Bitcoin trading, with BTC as a base currency, relative to the total spot volume on a platform (e.g., Binance).”

Chart 2 - Development of the Bitcoin trading dominance on Binance.com over 2019

This ratio started close to 20% on January 1st 2019, and briefly fell to 10% in March 2019. Subsequently, only 10% of the trading volume was against BTC (as a base asset). Since then, this ratio kept increasing, reaching new highs above 45-50% and subsequently stabilizing at roughly 40% for the rest of the year.

Dividing the Bitcoin trading dominance by the Bitcoin marketcap dominance is an indicator for relative interest in Bitcoin. Thus, it may allow for a general estimation of the current market perception of altcoins. This indicator is displayed below, in chart 3.

A correlation analysis may provide insights for portfolio management. Fundamentally, a correlation can be defined as:

“Correlation statistically measures the strength of a linear relationship between two relative movements of two variables and ranges from -1 to +1.”

In general, assets with a correlation above 0.5 or below -0.5 are considered to have strong positive/negative associations. Similarly, a close-to-zero correlation indicates a lack of linear relationship between two variables, and for this analysis, the returns of two assets.

In this report, 20 of the largest cryptoassets (excluding stablecoins) were selected based on their median market capitalization over the fourth quarter of 2019.

As depicted in the above chart, correlations between all pairs are always positive. Curiously, Tezos (XTZ) is the least correlated asset with a median correlation coefficient of only 0.3.

Similarly to the behavior in previous quarters, correlations between all pairs are typically more significant amongst the largest cryptoassets. For instance, Ethereum (ETH) and Bitcoin (BTC) displayed a correlation coefficient of 0.86 over the fourth quarter of 2019. Additionally, Ether continues its reign as the most correlated asset (corr. coeff. of 0.75). However, this opposes a significantly higher previous quarterly correlation coefficient of 0.81.

2.2 Development of correlations over the past quarters

To put that into some perspective, the previous quarters and the respective changes in correlation coefficients are also assessed. Chart 5 shows the correlation matrix for the first quarter of 2019.

Chart 6 shows the changed correlation coefficients between the first and the second quarter of 2019. The intensity of the colors can be singled out as a very rough but easy guide to interpreting this matrix. Red fields show the smaller 50% of values, while blue fields display the higher values. The intensity of the color indicates the significance - the darkest red field entails the smallest value, whereas, on the other hand, a light-blue field indicates a smaller value of the larger value set. Hence, lightly colored fields are close to the median value of the set.

Applying this methodology to chart 6 shows predominantly lightly colored fields, indicating the absence of extremes. This can accordingly be interpreted in the way that most assets were similarly strong correlated in quarter one and quarter two of 2019. Simply put, correlations largely stayed the same.

Another apparent conclusion from visually inspecting the correlation matrix is that Bitcoin SV was the only asset to have significantly lower correlation coefficients (from Q2 to Q1). This extraordinary behaviour can be explained by the “major delistings from large exchanges” of Bitcoin SV. Further information on this can be found in the 2019 Q2 - Correlation Report of Binance Research.

The most significant insight is that the largest change in asset correlations occurred in the third quarter of 2019. Based on manual inspection of the correlation matrices, this indicates that assets might be stronger correlated with each other in adverse market movements of the price. Coherently, cryptoassets are less correlated with each other in up- or sidewards movements. Further analysis over a more extended period could substantiate this finding.

2.3 Correlation analysis of large-cap cryptoassets for 2019

A first overview of the annual development of correlating assets is given in table 2 and chart 10. More precisely, table 2 shows quarterly average correlation coefficients for the five highest correlating assets, as well as BNB. 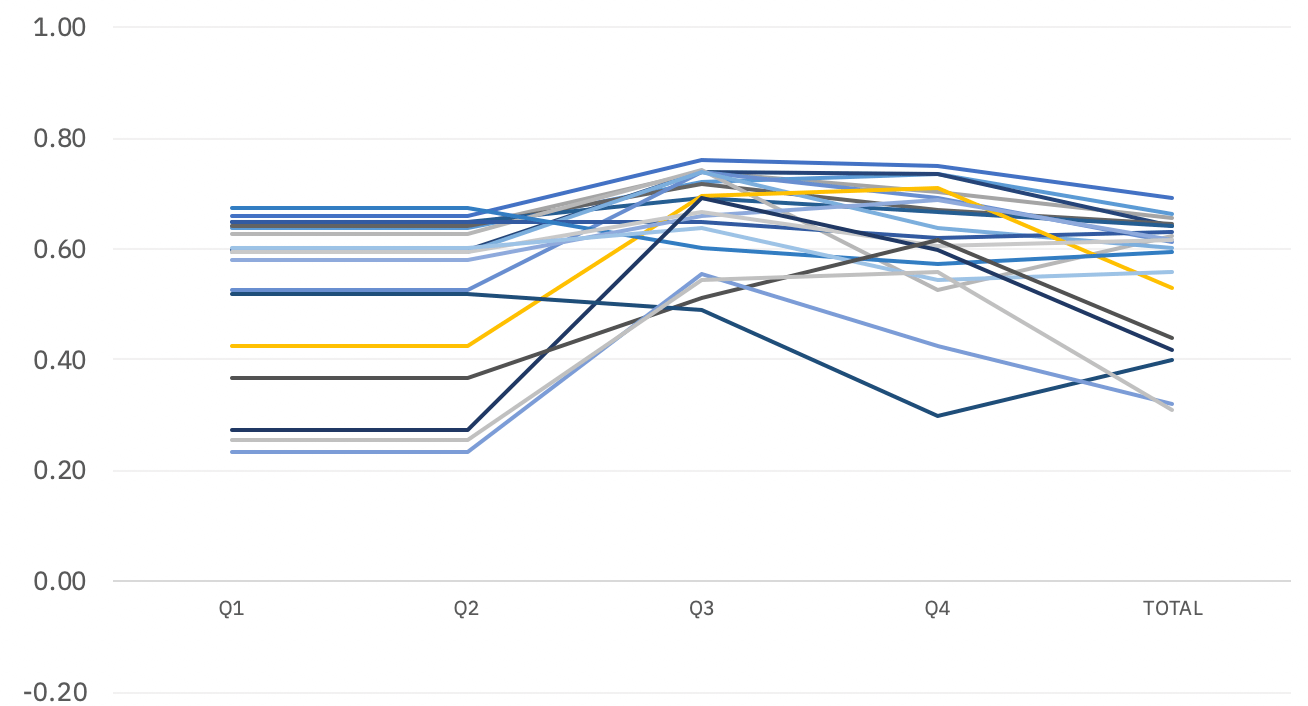 To deepen the analysis, the correlation matrix depicted in chart 10 is best assessed.

The lowest correlated asset, Cosmos (ATOM), has a correlation coefficient of 0.31, closely followed by Chainlink (LINK) and Tezos (XTZ) with coefficients of 0.32, respectively, 0.4. One differentiating factor between Cosmos and the other large-cap cryptoassets is the listing time - Cosmos only got launched and listed during the end of Q1 2019. As the median correlation of ATOMs appears to be increasing - annual corr. coeff. of 0.31 for 2019 with a coefficient of 0.56 for Q4 2019 -, the lower listing time might be one factor to explain this phenomenon.

Additionally, in a similar fashion to our previous reports, several general factors are found that likely influence the strengths of relationships between cryptoassets. These and other specific relationships are listed below:

In line with our previous reports, idiosyncratic factors such as programmable blockchains and the existence of a potential “Binance Effect” remain some of the critical factors impacting the strength of correlations among cryptoassets. Additionally, Ethereum became the most relevant benchmark of the crypto-market in 2019, displaying the highest median correlation with all other cryptoassets.

Further research could assess whether median correlations among cryptoassets are affected by the current market price movement. This first evidence indicates that cryptoassets might be stronger correlated with each other in market movements negatively affecting the price of cryptoassets.

DeFi #1 - Decentralized Lending and Borrowing Industry
Studying the landscape of the Ethereum decentralized cryptoasset lending industry.
Litecoin's Halving Scenarios in 2019
What are the implications for Litecoin's (and Bitcoin's) future decrease in block rewards?
Decentralisation and Governance of EOS: a Lost Case?
Assessing the governance of EOS against the benefits of decentralisation, such as collusion resistance.
Investigating Cryptoasset Cycles
A look at changes in cryptoasset correlations based on market structure.